A tale of popping cork rigs and fall fishing…Two hours into my mid-September charter, I was scratching my head and wondering where all the trout that I had been catching had gone. I had taken two days off and had expected to be able to go right back to the fall trout fishing and start whacking them.

We had a couple of white trout, lucked into a redfish and a handful of other species, but nothing in the way of speckled trout, our target fish. A cool front, first of the fall, had blown through two days earlier, but I’m an optimist and I was sure that it wasn’t enough to affect the bite.

“Hold on boys,” I told the crew. “We need to make a change in the game plan.”

I knew that it was time to move when I got the classic line from my charter customers: “Don’t worry about the slow bite Captain. We just like being out here.”

They may have been sincere, but I never buy that line. They hire me to catch fish, not boat ride. We still might not catch a lot of fish, but it wasn’t going to be from lack of effort. 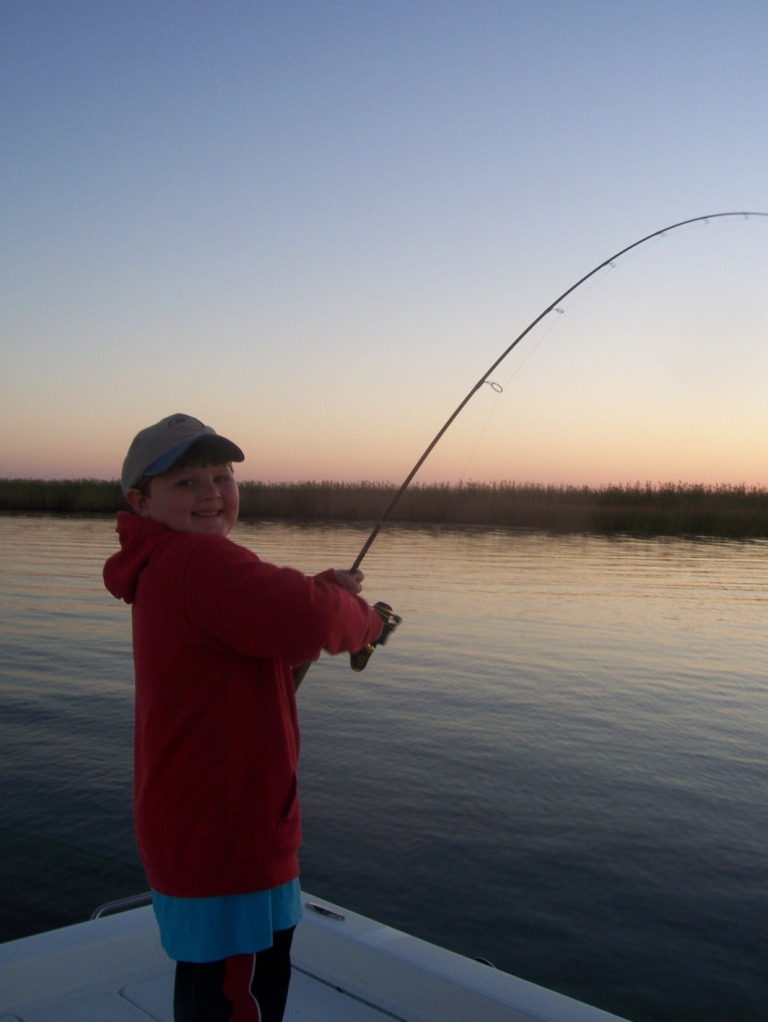 They all made great casts and the popping corks barely hit the water before disappearing beneath the surface.

We left the deep structure that I had anchored on and headed toward the marsh system on the northern side of the Mississippi Sound. On the way in, I spotted some diving gulls. I am not too concerned about small terns, but these were laughing gulls.

As we drew closer, it became obvious to me that they were in the attack formation. That’s when they hover over a school of fish and then one or two swoop down as a shrimp is forced to the surface. After a slow start to the trip, I was anxious to get some action, but needed to be careful not to screw up this opportunity.

I let the Minn Kota Riptide down and powered it up as I headed to the school from the upwind side. This allowed me to be quieter and also for the crew to make longer casts. Armed with shrimp imitations under popping corks, I had them start casting as soon as they thought they could get near the school.

They all made great casts and the popping corks barely hit the water before disappearing beneath the surface. I managed to stay off of the fish long enough to get a bunch of triple hookups. The speckled trout were not monsters, but most were legal and after the way this trip had started they looked like world records to me.

After the action subsided, we continued our move and finally made it to Grand Bay. I set up a drift along the deeper drop-off side of a larger grass flat, throwing both fake and live shrimp under popping corks. Some 10 minutes or so into the drift, I was almost back to head-scratching mode when a cork shot under.

The trout came straight to the surface when it realized it was hooked and cut up the entire way to the boat. “Man, that’s a pretty sight to see,” I said while activating the Power Poles to hold our position.

“Alright, guys, cast in that direction and let’s see if there are any more of those,” I instructed. There were.

We stayed put for close to an hour with at least one rod being bent all the time. These were speckled trout in the two- to three-pound range. It didn’t take long to put together a pretty decent box of fish.

Like a shark smelling blood, I felt like a workable pattern had been established and decided to stay with that for the rest of the trip. It worked. Most of the drifts I made resulted in at least a few fish each.

The early fall transition can be tricky as I think the fish really start to move with the bait as the water temps change. Here are some fall fishing tips, a few tactics, and techniques that I use to help stay on fish through this period.

The bad news about the transition is that, as mentioned, the fish really are moving. They can be in one area one day and literally miles away the next.

The good news is that they are usually eating as the water cools. That means it’s all about finding the fish. Some of the signs that I look for are, of course, diving gulls.

Be careful not to chase after the smaller terns as they are usually diving on small minnows. They can have trout under them, but more often than not, they don’t.

“The larger terns and laughing gulls are usually hovering over shrimp.”

The larger terns and laughing gulls are usually hovering over shrimp. Watch how they are acting. If they dive sporadically, they are over feeding fish.

Slicks are another dynamite indicator of feeding trout. When trout eat, they ingest water as they force the prey down. As the water is expelled, it is mixed with digestive fluid.

This creates a circular oily sheen on the surface. Understand that the slick will be downwind/current from where the fish are, so figure in the amount of both when you try to get set up on them.

Capitalizing on both diving gulls and slicks requires some strategy. Keep in mind that unless the fish are on structure, they have nothing in which to relate. That means they will be on the move.

So, if you spook them, it’s over. Outboards, kicked ice chests, slammed lids, tossed anchors, etc. all create huge noise that resonates through the water.

All are also unnatural, so when the fish hear it they shut down and move. I go to extremes when setting up on a potential school of fish. First, I circle way wide of the fish and set up on the upwind/current side of the school. If I’m not exactly sure where they are, I exaggerate how far I set up away from them.

Of course, I shut off the big motor and gently lower the trolling motor into the water. I only use the trolling to steer the drift, and even then only on low settings. Once I think that we can reach the school, we start casting. As soon as someone gets bitten, I stop the boat.

I have Power Poles on my Skeeter, but in the pre-Power Pole days I used a Cajun anchor in shallow water. They work fine and are much quieter than a regular anchor. The point is, though, to quietly stop the boat from drifting into the school. By doing so, you can really work on the fish.

Most of my tackle gets some tweaking to help in the performance. One big key to effective shallow water fishing is to be able to make long casts. The rods I use are 7’6” medium action with Penn 2500 Conflict, Conquer and Slammer spinning reels.

Braided line is also a must for a few reasons. First, because of the low diameter, it can be cast farther than mono—that’s the big one.

Secondly, braid eliminates line twist when it is reeled in against the drag—like when a big fish is on. A line twist makes a backlash look good. Thirdly, because braid has zero stretch, the hook can be set from much farther away. 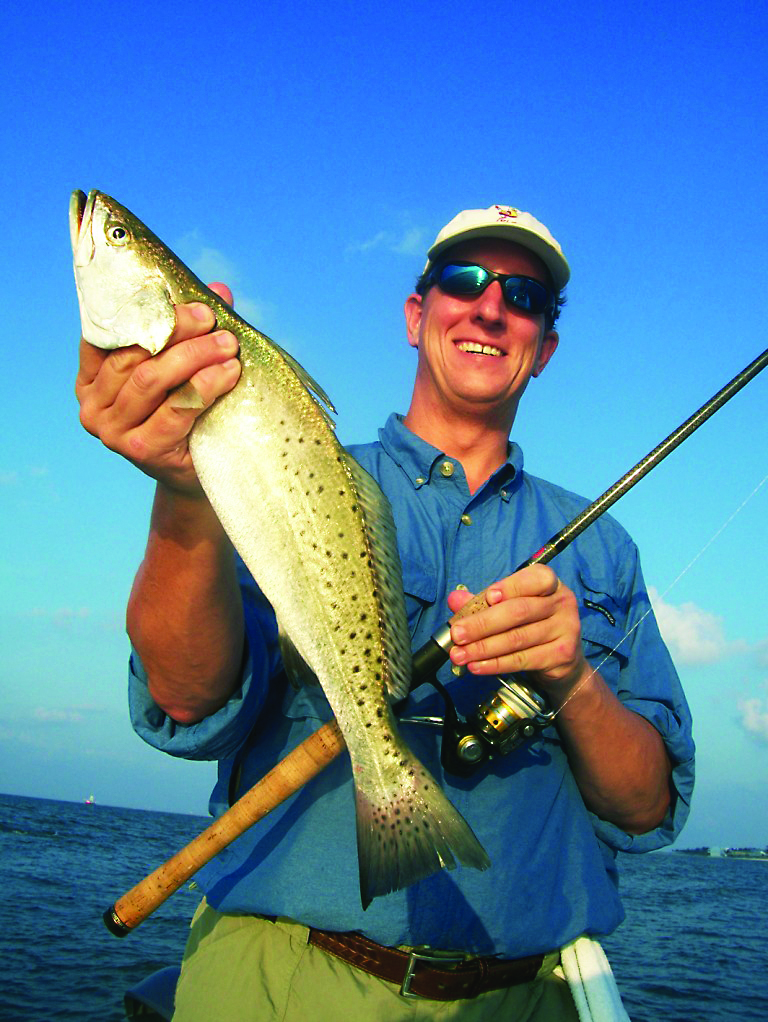 The popping corks are cup-shaped at the top, so it makes a very good “popping” sound.

I have been using Nanofil on my spinning outfits for a while and have found it to be very good on spinning reels. The problem that I have had with other braids on spinning reels is the occasional wind knot. It too can be ugly, resulting in a bunch of expensive braid to be cut off. The Nanofil has eliminated this problem for me.

My popping corks come from No Slack Tackle Co. They are the best popping corks I have found and, like my other equipment, have gone through an evolution. The wire is titanium, so you can twist and turn it and it still pops out straight.

The popping corks are cup-shaped at the top, so it makes a very good “popping” sound. The series of brass beads add to the sound.

Lastly, I have added a ½ oz. weight to the series of rattles. This created two benefits; one on purpose and the other accidental.

The added weight allows again for longer casts, which was intentional. The other thing it did, though, was cause the popping cork to sit lower in the water, allowing cork pops with much less effort.

How To Rig A Popping Cork

I like the D.O.A. shrimp, and there is no better redfish bait than GULP! On the D.O.A. and GULP! I use a “Bobcat’ style hook from No Slack Tackle. The hook has the weight on the shank of the hook with molded in ridges.

The weight distribution creates a natural sink rate and the ridges keep the bait on the hook until the lure is literally shredded to pieces.

If you have used either bait, you know how badly they start to slip on the factory hook after only a few fish.

Lastly, I tie about three feet of fluorocarbon above the popping corks. This eliminates popping corks knotting on long casts and also allows for the popping cork rigs to be cut off and switched to another type of lure very quickly.

I use a triple surgeons knot to tie the leader on, but there are many line-to-line knots that work very well. The best knot is the one you can tie quickly and it doesn’t come untied.

There is a lot of stuff going on—football, bird hunting, school—in the early fall that can make the inshore fishery a quiet one this time of the year. With just a little effort, it can also be a very productive period. I hope that the popping cork fishing techniques presented here can help you enjoy sport fishing as much as I do.