Chain pickerel fish may not be as big as their northern cousins, but the deep South’s member of the pike family is certainly fun to catch.

This can’t be good for my heart.  Once again, an aggressive fish has blasted up out of the weeds to take my top-water lure, and the fish is now dancing across the water and then boring deep toward the weeds below where it can find safety.

Although the fight is intense, it doesn’t last long, and then my opponent is finning at the side of the boat. 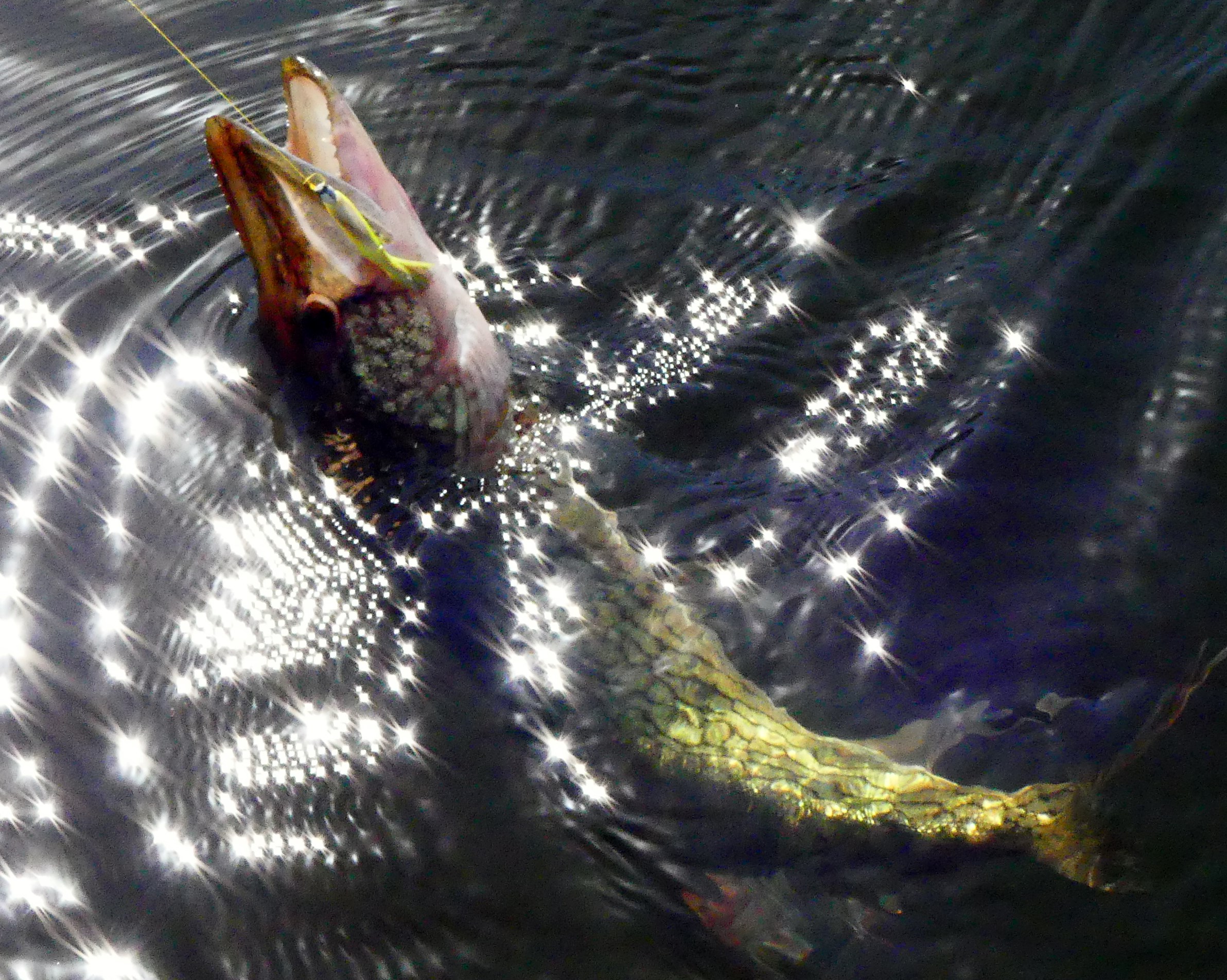 Pickerel can show up just about any time of the year.

About a foot and a half long, the green on top and white on the bottom of this long, slender fish is separated by sides streaked with chains of light gold across a greenish background.  And there’s an intense black and gold eye that glares at me for disturbing its morning hunt for food. But the most impressive thing about this little freshwater tiger- that long, broad bill of a mouth filled with rows of super-sharp teeth.

This is a fish that doesn’t need to be held by the lower jaw for hook removal. At least, not more than once in a lifetime.

I carefully remove the single hook of the spinner bait from the toothy jaw and then slide the long, slippery body of the pickerel back into its home waters. I do believe I can do with some more fun of this kind, even if it is bad for my heart.

Chain pickerel are one of those interesting and good things in life that turn up unexpectedly in most cases.  Not many anglers set out to catch chain pickerel, but they encounter the freshwater tiger fish in a wide range of situations. Pickerel can be caught at all times of the year, so anglers seeking early spawn bass, post spawn, and middle of summer top-water bass can meet up with the pickerel.

One of the most common encounters between anglers and chain pickerel occurs in early spring when many anglers are on the water looking for spawning crappie. 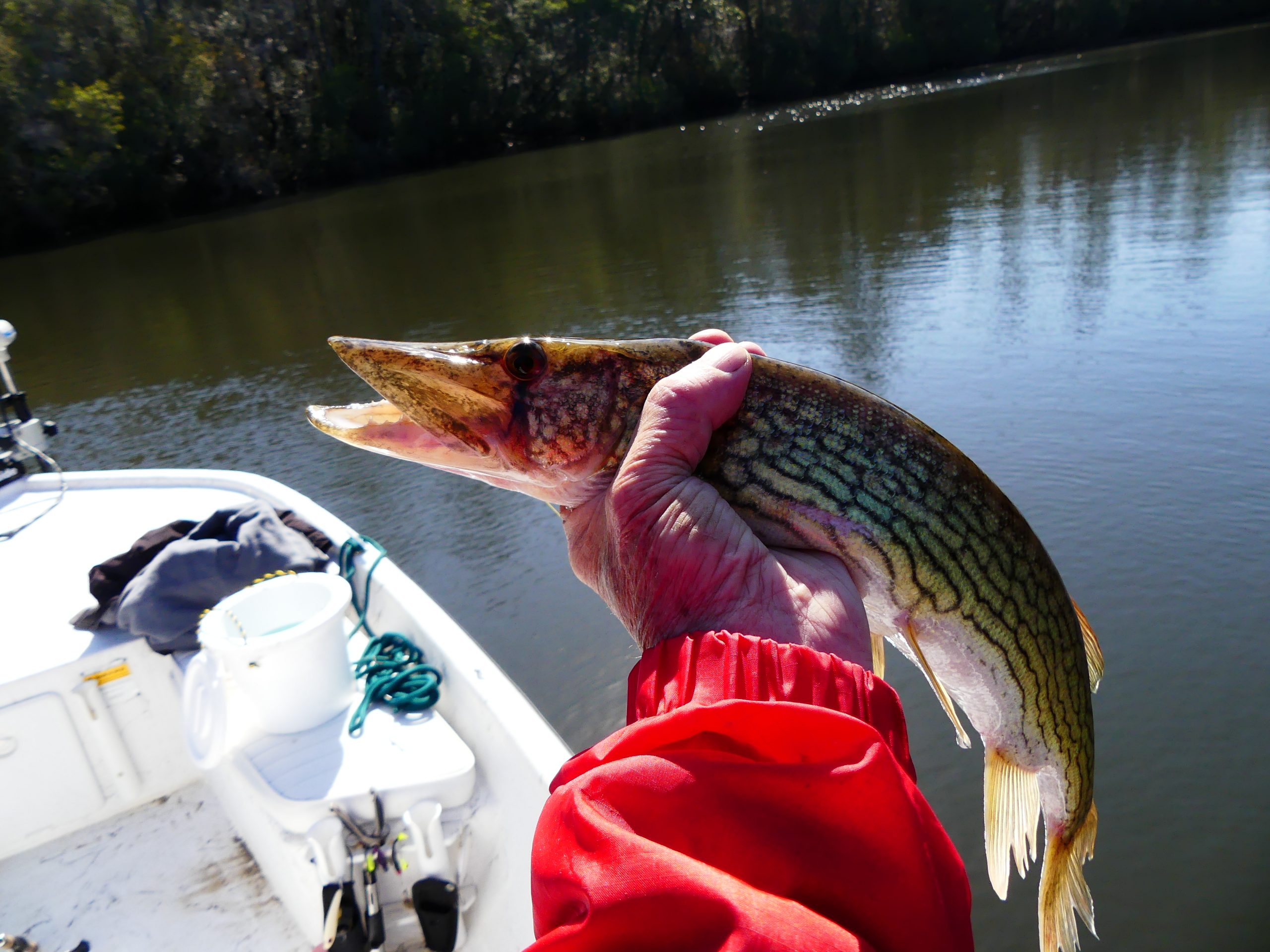 They’re not as big as their northern cousins, but southern pickerel are game fighters.

It seems that chain pickerel and spawning crappie occupy the same sort of territory in spring- shallow water, lots of wood cover, some weeds nearby are nice.

Then when anglers drop a lively minnow under a bobber or slow-swim a crappie jig past a place where crappie should be, quite often the toothy pickerel intercepts the crappie lure and takes it for his own.  Chain pickerel cannot resist a helpless minnow, and the strike and following fight can come as a real shock to a crappie seeker.

“One of the most common encounters between anglers and chain pickerel fish occurs in early spring when many anglers are on the water looking for spawning crappie.”

Of course, with that mouth full of super-sharp teeth, if a light crappie leader contacts a tooth, the fight will be over in a flash.

Another common pickerel encounter situation happens when a bass angler is working heavy shoreline or an open water hump with thick cover and structure.  What usually happens, in this case, is the angler makes a good cast into the thick stuff, starts a retrieve, and then an aggressive chain pickerel intercepts the lure, makes a vicious strike, and the angler gets to see a couple of leaps before the pickerel gets the line across its teeth.

Then the line is cut, the expensive bass lure is gone, and the angler usually responds with some hot language directed toward the pickerel and its whole family.

Finding chain pickerel fish in the South is not difficult.  Most sizable bodies of freshwater in the deep South hold populations of pickerel, but anglers can improve their chances of finding and hooking up the tiger fish by fishing creeks, bayous, and shallow bays off the main lakes or river bodies.

The best pickerel water will be as full of cover as it can go. Lily pads are good- pickerel love to hide in the dark shadows below pads and ambush prey as it moves over them. 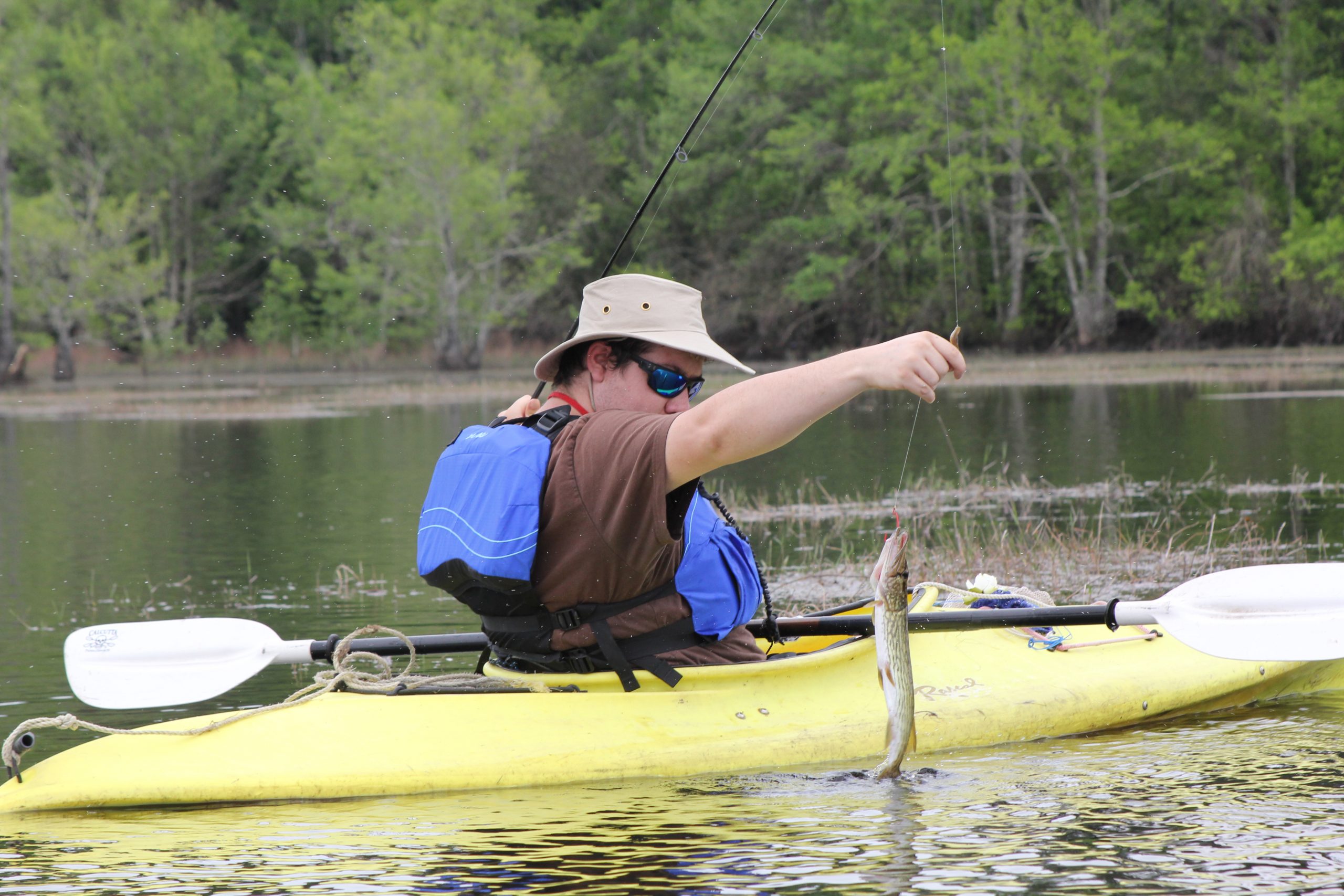 Thick under-surface weeds can make fishing difficult, but pickerel will use the heavy weed growth as cover, and then when hooked, try to run back into the thick stuff for escape.

Logs, either floating or sunken are great ambush spots that pickerel love to hide under and then explode on lures that pass by too close

In short, the more gnarly and rough the cover, the more likely it is an angler will find pickerel.

Give ‘Em Some Bling

One of the things anglers have discovered about pike of all kinds and our southern pickerel in particular- they love things that are shiny and flashy. There’s nothing subtle or delicate about chain pickerel.

Spinnerbaits are very effective for attracting the attention of pickerel. A small inline or safety-pin type spinner in light colors is deadly on pickerel. 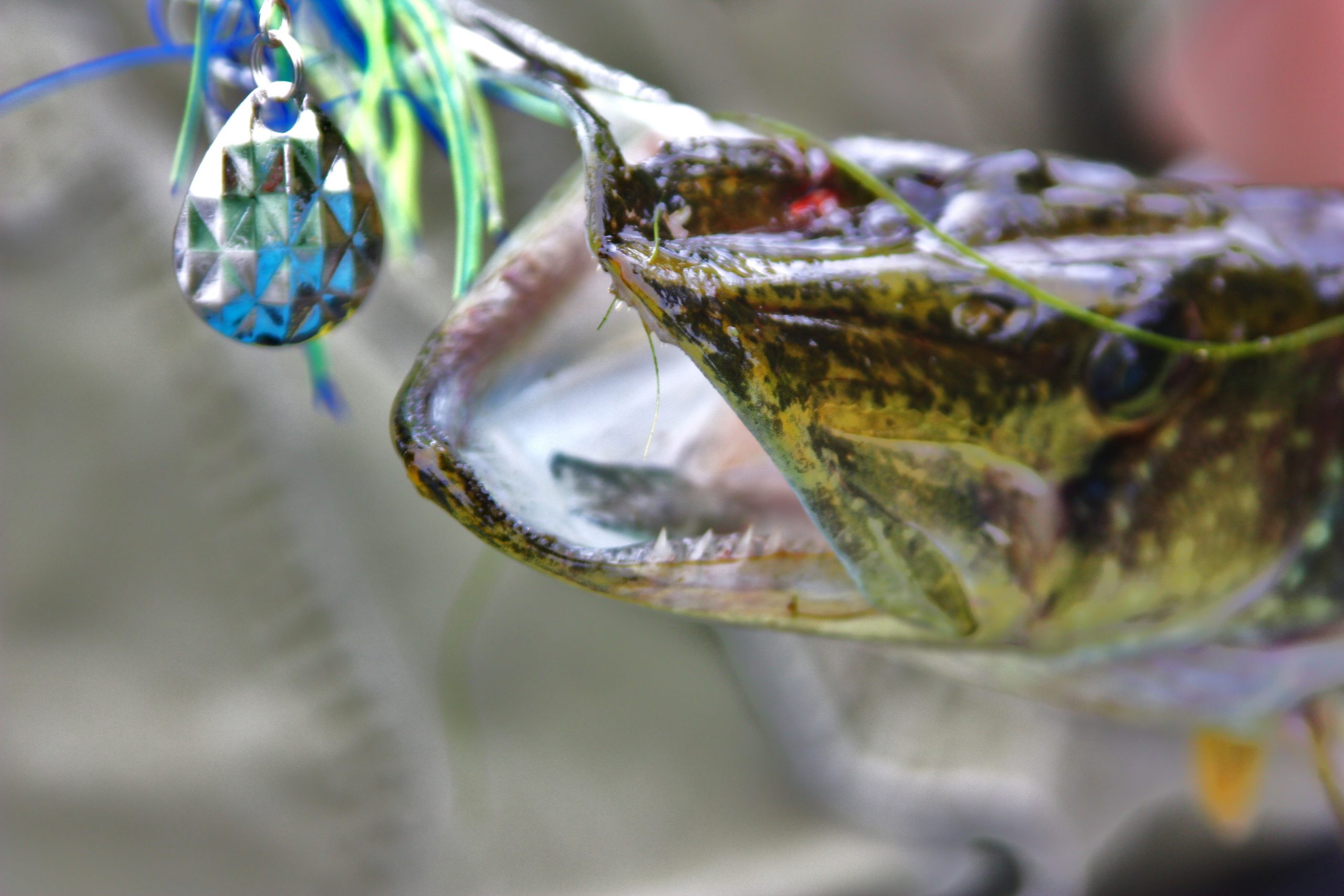 Spinnerbaits are just about the best lure to attract the attention of a pickerel.

Work a spinner past the heaviest cover and hold on. Early and late or on cloudy days, the spinner can be buzzed along the surface. This can produce some very impressive top-water strikes from hungry pickerel. In mid-day or bright situations, let the spinner fall deeper into the water and bring it back from a cast just fast enough to cause the spinner blade to turn.

A really fun way to find where pickerel are holding in a particular bay or bayou is to use a spoon- the venerable Johnson Silver Minnow is best, and make long casts far over the cover. Retrieve the spoon fast enough so that it rides over the heaviest cover and then wobbles when it is in more open water.  It is not unusual to have two or even three strikes from different pickerel on a single cast as the spoon covers a lot of good holding water.

The chain pickerel will not get hooked on every strike with this technique. If there’s a lot of line out and slack develops, as it usually does, a pickerel strike will not often result in a hookup. But it is lots of fun to see the fast and furious little pike blow up on the spoon. 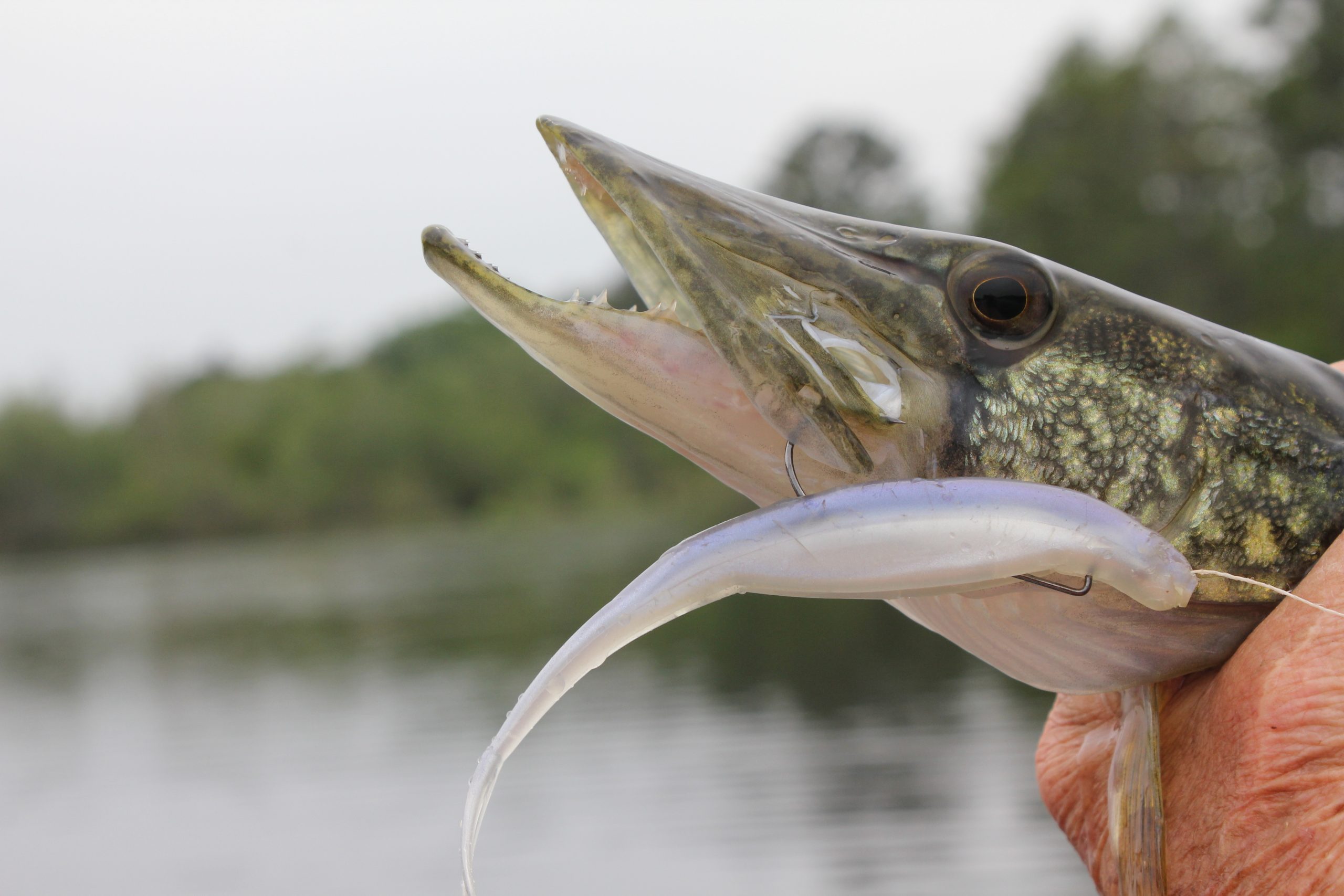 However, for best results, I like to use a white or silver soft plastic fluke for pickerel. I rig the fluke weedless and weightless. I throw the fluke as far as I can over heavy cover, and then I hop the fluke back to the boat.  I make as much commotion as possible, and when the fluke reaches an open patch of water, I let the lure sink as far as it will go.

A sinking fluke is too much of a temptation for any pickerel in the area, and some strong strikes often occur as the fluke sinks.

It’s often that a bigger pickerel will blast up through the weed cover to blow up on a fluke which is hopping and bouncing over the surface.  This, by the way, is a whole of fun.

Leaders- for those Teeth

The sharpness of pickerel teeth and the skill with which the mini-pike use these teeth to separate anglers from their lures is well-known.  Chain pickerel fish can slice through just about any weight of monofilament line in a heartbeat.

So, what are anglers to do to keep their hooks in a pickerel jaw?

Traditionally, anglers have resorted to wire leaders. Up north where the massive northern pike and muskies are caught, wire leaders heavy enough for saltwater shark fishing applications are used. That would be too much of a good thing when fishing for pickerel.

“Even though wire leader works, many anglers don’t like using wire because it is heavy, and it’s stiff and doesn’t allow good lure action in many cases.” 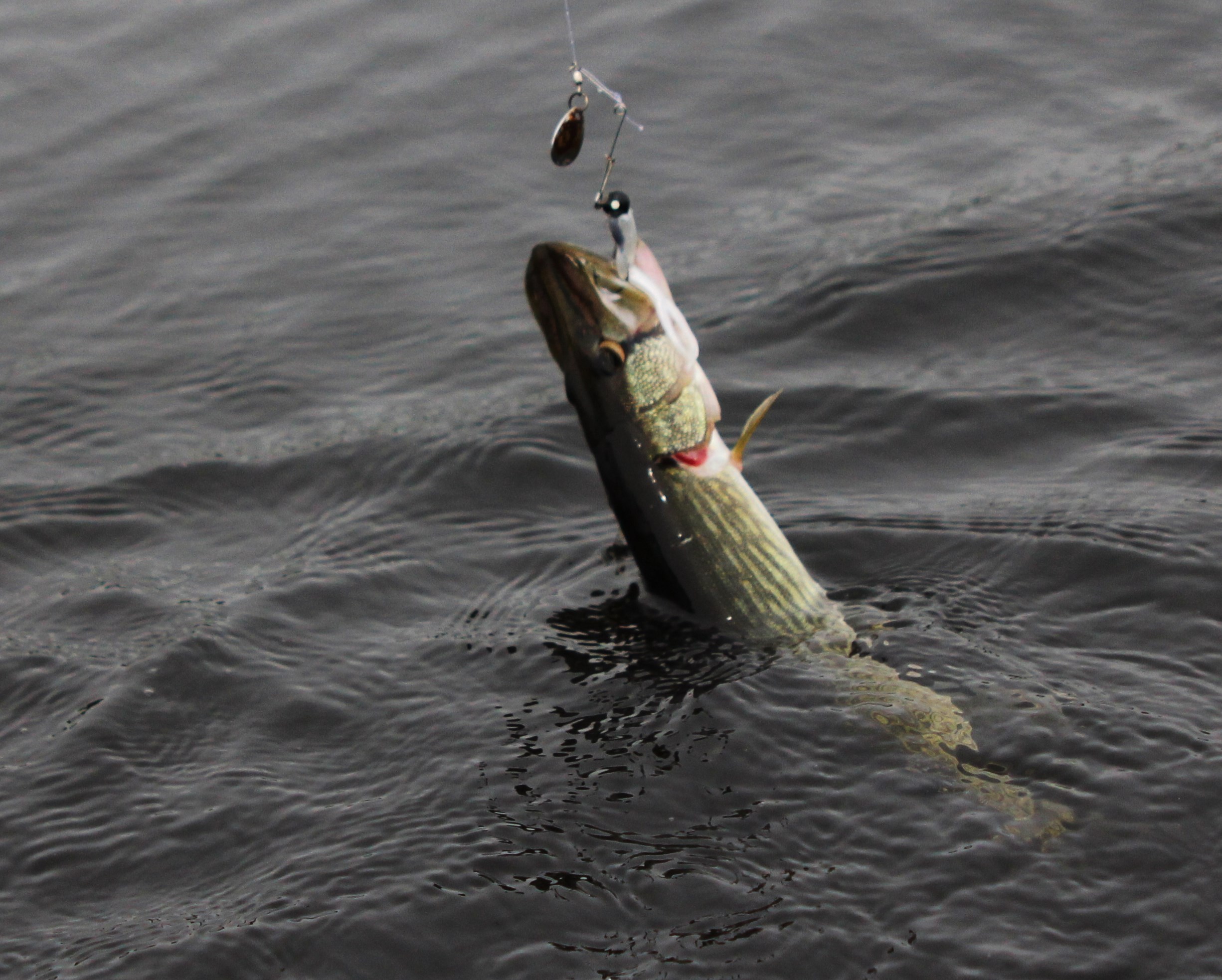 Using wire or braid leaders can help get pickerel to the boat.

A light wire leader- it only needs to be eight inches or so long- will work well to protect the line from pickerel teeth.  A leader wire called Tyger Wire works well because you can tie it, and good solid knots can be worked into this protective leader.

Even though wire leader works, many anglers don’t like using wire because it is heavy, and it’s stiff and doesn’t allow good lure action in many cases.

Good results using a short one-foot long section of 20 lb. Power-Pro or another good braided line as a bite-leader have been found.  The braided line is not perfect- pickerel teeth will still cut the line if the teeth make too solid contact with it, but braided line is much more cut-resistant than mono, and it’s limp and limber enough to allow very good lure action, and it is not nearly as visible in the water to the sharp-eyed pickerel as a similar length of wire.

And Dealing with the “Trash Fish”

Anglers looking for some chain pickerel fish fun often must deal with some less-desirable fish that take lures or bait intended for mini-pike.

Grinnel live in the same waters as pickerel, and they are not shy about crushing a bass or pickerel lure, and when they strike and take a lure, often the lure comes back in bad shape because grinnel are strong powerful fish. The best thing to do with grinnel is to remove them carefully from the hook- they have sharp teeth and strong jaws, and send them back on their way.

The other kind of “trash fish” that pickerel anglers often encounter is that pest that occupies pickerel waters- the largemouth bass. 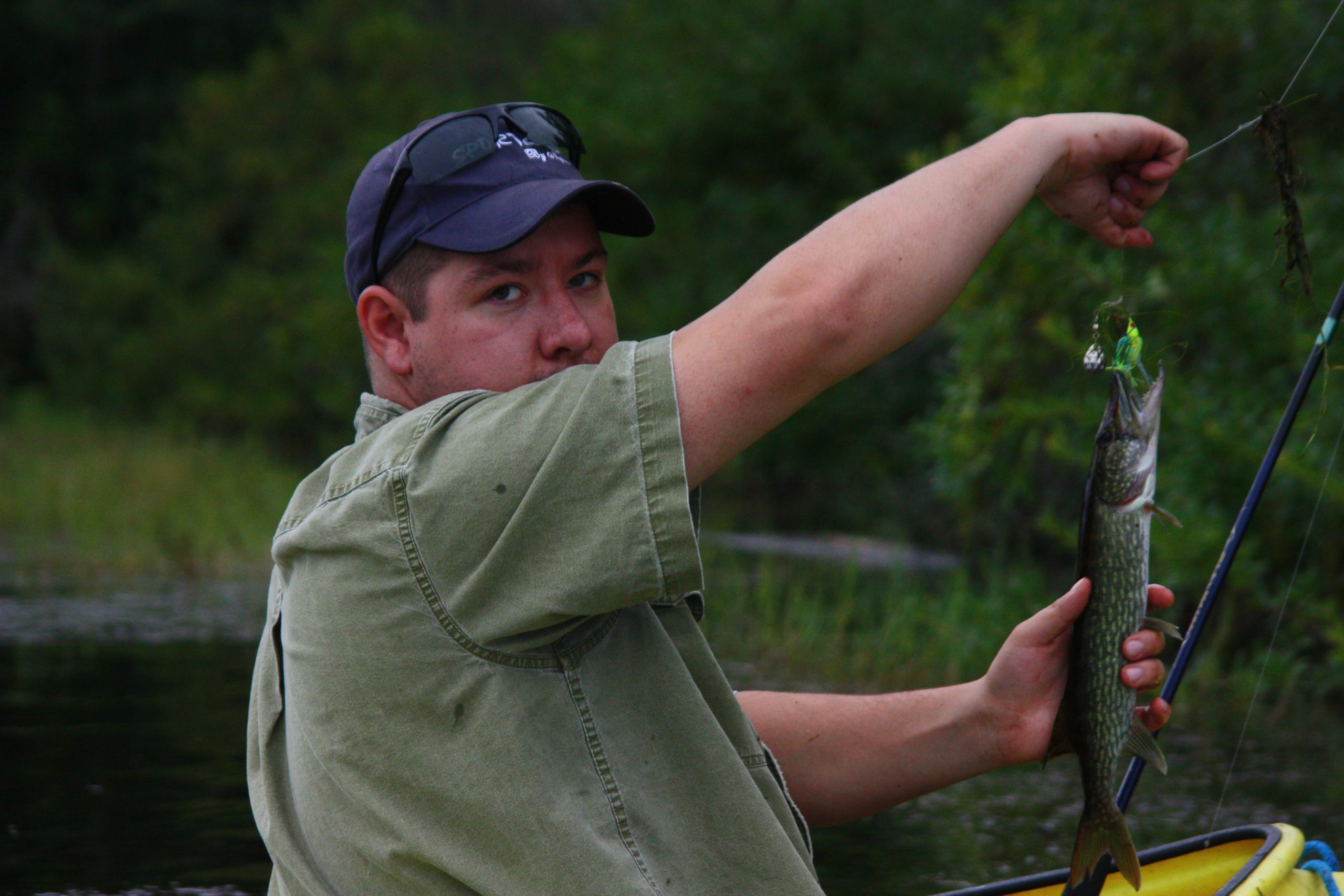 Even the small pickerel are fun when they take a lure.

It’s not uncommon for an angler seeking two-pound chain pickerel in the heavy weeds to have a seven or eight-pound bass take the lure and treat the angler badly for a while.  All that can be done is to work the bass carefully, get it to the boat, and then carefully release it.

Then it’s time to get back to serious pickerel fishing.