Many factors need to be considered when choosing a deer food plot seed blend for your food plots this fall. One of the factors that is often overlooked is the climate and the amount of moisture that will be in the soil when you plant. If you intend to plant a food plot in an area that floods often or stays wet even during the hottest part of the summer, you may want to consider a seed blend that has been combined for wet soils. Or, if your green field will be planted in a bed that gets almost full sun all day, every day, and is subject to drought, then you’ll want a different type of seed blend.

Still another consideration is if you want a crop planted for early-season bowhunting or one that will be available to the deer at the beginning of gun season and continue to provide very-palatable, highly-nutritious food throughout the winter months. To learn the answers to these questions, GDO  interviewed Austin Delano, a habitat and wildlife associate for Mossy Oak BioLogic.

Also, consult your local Alabama Farmers Cooperative dealer who will have the best information on what crops seem to be preferred for green-field plantings by deer hunters in the same area where you hunt. The dealer also can share the results he’s seen from planting a particular variety of deer seeds for food plots.

John E. Phillips: How important is knowing the difference between the climate in north and south Alabama, and how do those areas influence the type of seed blends you and the Alabama Farmers Cooperative recommend for Alabama deer hunters to plant. 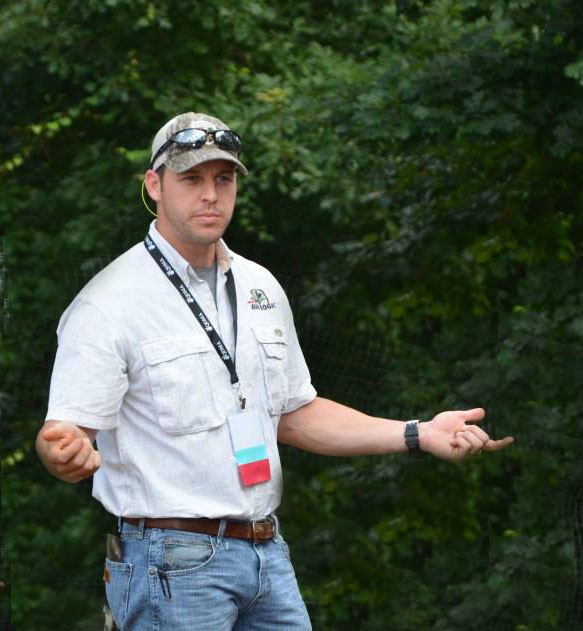 Austin Delano: One of the major factors that influences food-plot plantings in Alabama’s different climates is when you plant the seeds. A landowner or a manager needs to know when that crop will be available and attractive to the deer you want to hunt. Many of the Mossy Oak BioLogic blends will produce good crops from Florida and into the far parts of the North. Certain food-plot plantings are best for early-season bowhunting. Also other food-plot plantings produce plenty of highly-nutritious food for deer throughout the fall and winter months.

What to Plant for Early-Season Bowhunting

Delano: If you’re planting for early-bow season to have a crop to attract and feed deer, plant your seeds 30-45 days before the opening day of bow season. That growth will be very young and palatable to the deer. But consider the weather to be sure to have enough moisture in the soil for your deer food plot seed to germinate. Never plant when the land hasn’t had rain in 20 to 40 days, or after a flood when water’s still standing in the fields. 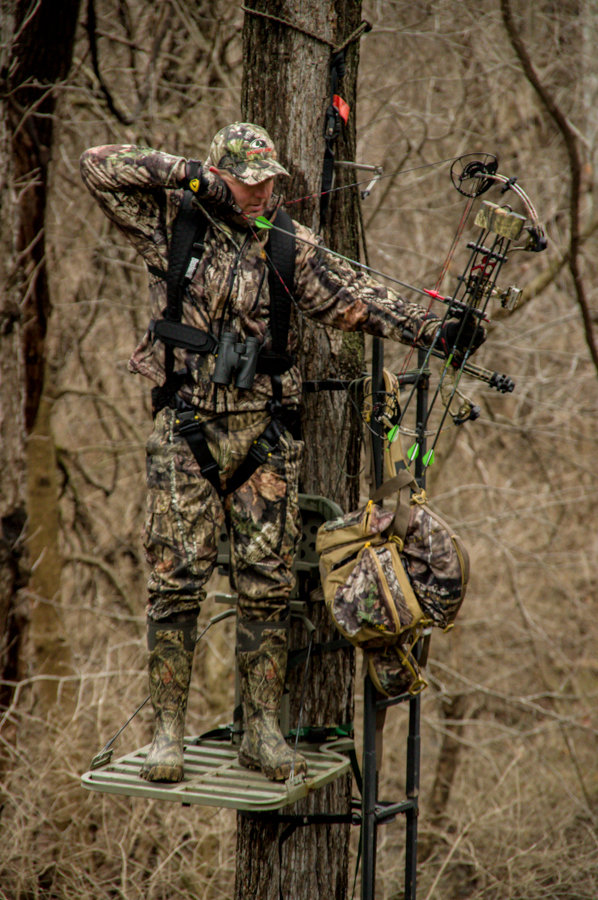 For a better idea of when most deer hunters plant their green fields in the area that you plan to hunt, talk to the nearest Alabama Farmers Cooperative dealer to your hunting land.

Phillips: For bow season or early gun-season crops, what seed blends do you recommend and why?

* Green Patch Plus and Deer Radish:

Phillips: Give us the names of some of the seed blends you suggest for bow season and why.

Delano: Mossy Oak’s Green Patch Plus contains cereal grains, clovers and Brassicas – all seeds that come-up in the early part of deer season and taste good to the deer. Deer Radish – containing two varieties of radishes and a Brassica – has a flavor that deer really like and also can produce a good crop for early bow season. Cold weather isn’t required for these plants to be very attractive to deer, like some people tend to believe.

Phillips: Adding radishes is somewhat of a new idea, and hunters may not have considered it as a seed for deer food plots. 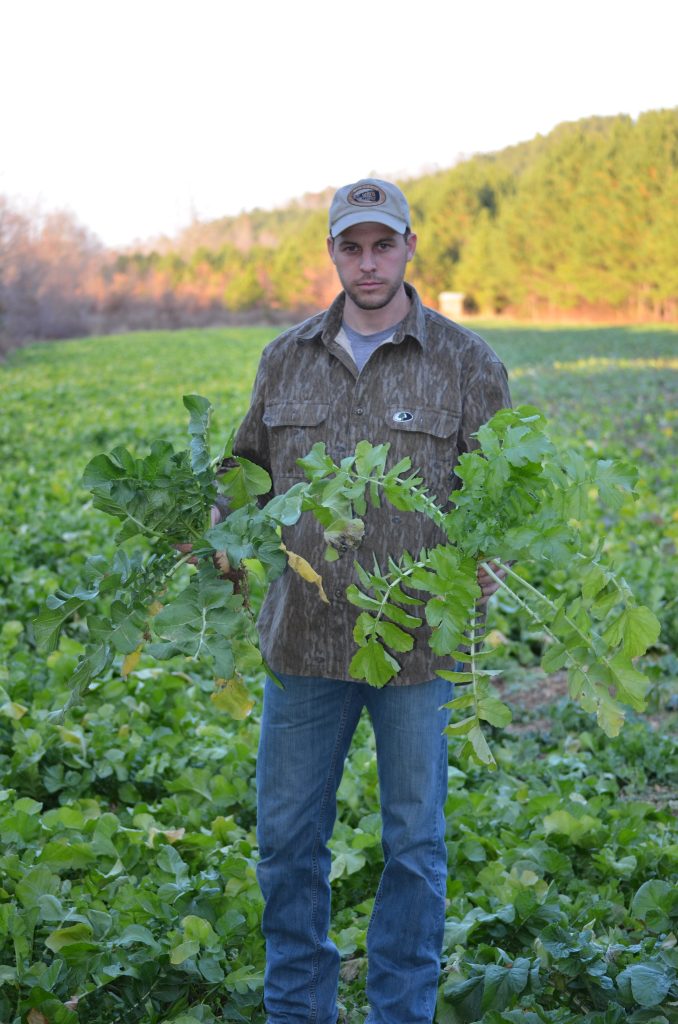 Deer Radish is an early food-plot planting for the beginning of bow season when southern states experience some of their hottest weather.

Delano: We’ve probably only been adding radishes to some of our Mossy Oak BioLogic plantings and recommending it for early-season plantings for about 10 years. The radishes have the ability to grow a good amount of foliage the deer can eat. Also Deer Radish doesn’t require as much water as many of the early-deer-season plantings may. We’ve found that they really blend in well with our cereal mix like wheat, oats and cereal grains. They come out of the ground quickly, after only a couple of serious rains, and then continue to grow and produce deer food with very-little rain. Most of our early-season plantings for Alabama take place in September, which is often one of the driest times of the year. The ground must have enough moisture to cause the seeds to germinate. Deer Radish is resilient.

Another early-season planting that yields food for deer and turkeys before and during the beginning of bow season is Mossy Oak’s Non-Typical Clover. We start planting it in the fall with cereal grains – wheat, oats and/or BioLogic blends like Green Patch – and mix in the Non-Typical Clover with the cereal seeds. After the early season, when the deer have eaten all the cereal grains from a food plot, by the spring of the year, Non-Typical Clover will grow in your food plot, if no major droughts occur, giving you a perennial clover field that you can maintain for several years.

Hot Spot has been a product used with great success in the South and particularly in Alabama. Hot Spot contains several different varieties of seeds – cereal grains, clovers and Brassica – that produce well under adverse weather conditions, including less-than-ideal amounts of sunlight hitting the ground, and can be planted with minimal soil disturbance. If you don’t have farming equipment to plant your green fields, or if the terrain doesn’t lend itself to using large tractors and farming implements, hunters can put-in a small hunting green field of Hot Spot with hand tools. 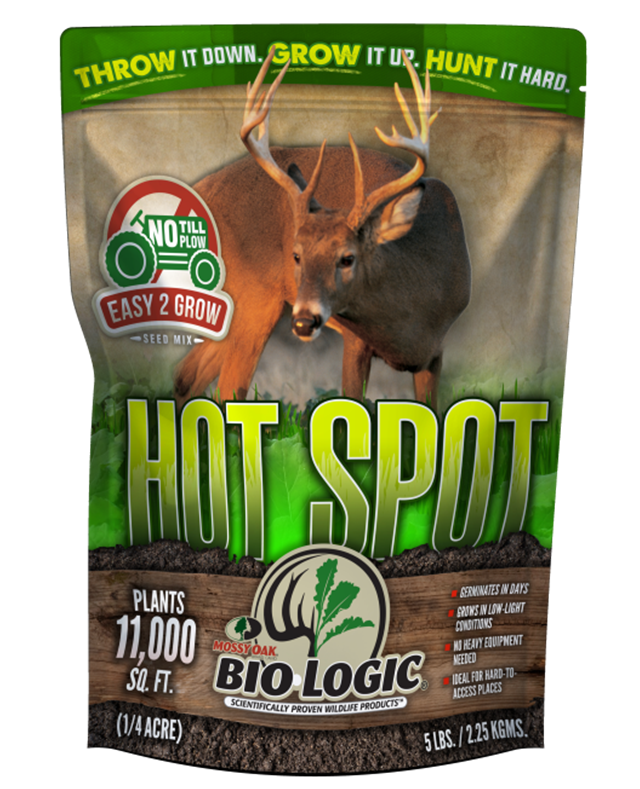 Hot Spot jumps out of the ground, comes up within days and grows even in low-light conditions.

The key to having an effective, small, hunting green field with Hot Spot is to make sure that the seeds have good contact with the soil. We recommend spraying the green fields with herbicides first to cover the vegetation in the small areas where you’ll put the green fields. You can use a backpack blower to blow leaves and dead plants off the ground to leave the potential green field clear of litter. Next use a rake or a small rototiller to break-up that top layer of the soil. Then when these seeds hit the ground, they’ll land on soft dirt, and once they germinate, they’ll have loose soil in which to take hold.

Phillips: If the ground where you want to locate your green field is very dry, which product works best?

Delano: We use chicory in our Clover Plus Blend to solve this problem after the plot’s planted. Deer Radish does well in dry soil conditions after the product comes up. These seeds still need rain to germinate, get out of the ground and begin to grow. Then they can survive and produce better than some-other food-plot plantings if you’re planting in an area that tends to be dry or receives very-little rain in the early fall. Ground that stays moist most of the early season needs Non-Typical Clover planted.

What Deer Plot Seed to Plant for Gun Season

Phillips: What food plot mix for deer do you recommend for the beginning of gun season through the end of deer season?

Delano: Mossy Oak BioLogic has various wildlife plantings that produce well from the beginning of gun season until its end. To plant a green field during the middle of deer season until the end of deer season, try to plant the crops 60 days before the first frost. For mid-to-late season planting, we suggest bigger, bulkier Brassicas. I’m a big fan of Final Forage Blend that contains radishes, turnips and rape. We’ve had great success with this blend throughout the entire state of Alabama and even further north. This seed blend offers some plants that deer like during early season and other seeds that the deer don’t key in until December and January. For a gun hunter, Final Forage is a productive green-field planting to consider. Next I’d choose Outfitter’s Blend that has cereal grains, clover and Brassicas in it. 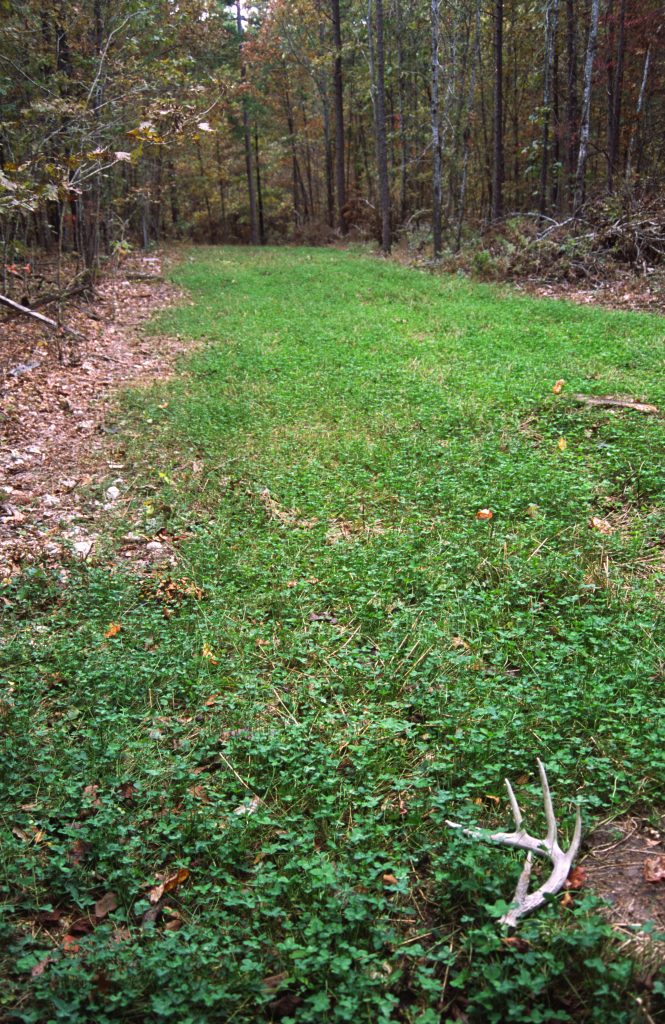 For the small-property owner, a small green field like this one may stop and hold a good buck during early bow season.

Phillips: Why do you prefer those two blends of seeds for the late season?

Why to Plant Seed Blends

Phillips: Why do you recommend planting deer food plot seed blends instead of one crop, like corn, soybeans, winter wheat and/or alfalfa in the green fields for gun/deer season?

Delano: Planting seed blends in the late summer or early fall allows you to have several varieties of plants that we know the deer are really attracted to at that time of the year. Those plants will be in the young, palatable stage of their growth cycle. These seed blends give deer a diversity of choices of foods that they can eat and like to eat. If they prefer to eat clover, it’s there, as are cereal grains, radishes and turnips. The deer may not even have to take a step forward or back to eat any or all these food choices.

Remember, deer eat a wide variety of foods. They’re browsers, which means they like variety in their diets. What we’ve learned from combining different seeds from various plants deer like is that if green fields offer many kinds of seeds, then the deer will be more likely to come to that green field and stay longer. 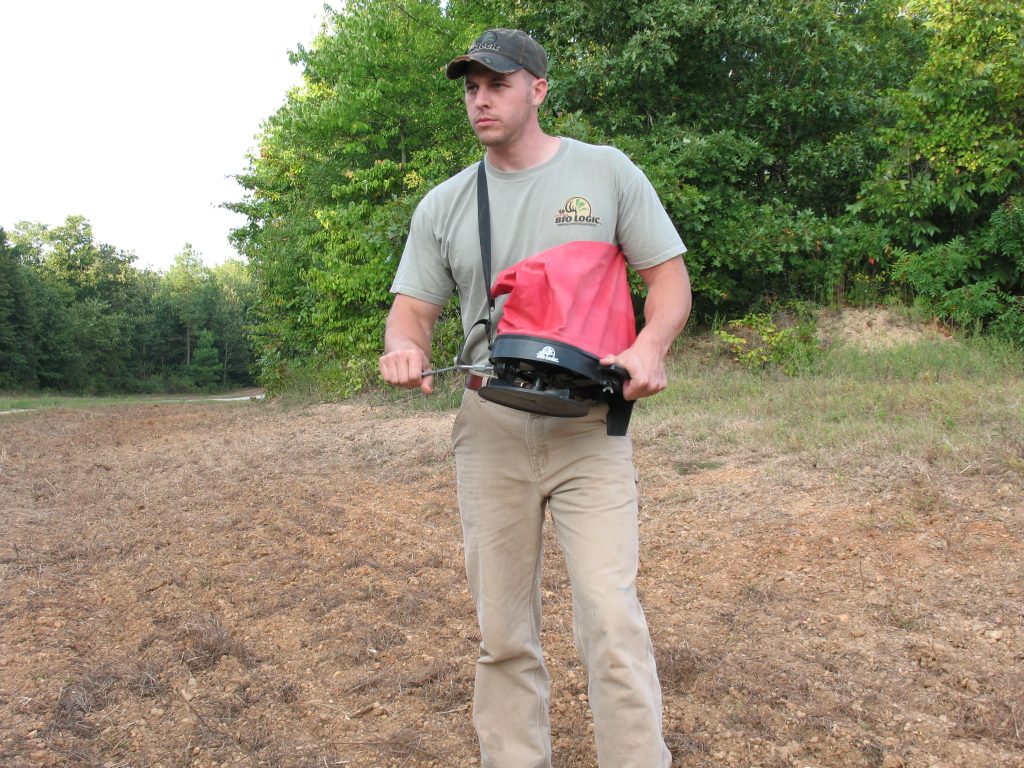 On small green fields, all you may need is to use a hand seeder after you’ve turned the soil.

BioLogic can’t pre-determine the weather. However, a deer food plot seed blend with a variety of seeds in it may produce in both hot, dry weather and rainy weather. For instance, if you plant one late-summer, early-fall crop, nothing in that blend will last well into the colder months. If your food plot only has cold-weather crops planted in it, you’ll lose the possibility of having a productive food plot for early season. By choosing seed blends, you can make sure that you have food available for the deer – regardless of the time of year you want the food plot to be productive, and in any climate that will impact the food plot later in the season.

So, always talk with your nearby Alabama Farmers Cooperative dealer, who will be more familiar with your weather patterns, and which food plot seed for deer will produce best year after year for: early-season and late-season deer hunters.

Based in Decatur, Ala., the Alabama Farmers Cooperative (AFC) is made up of 52 local, farmer-owned cooperatives in Alabama and the Florida Panhandle that operate 80 stores. The stores also sell a wide range of agricultural supplies and services, sporting goods, home gardening and pond supplies and birding and wildlife products. To learn more, check out https://www.alafarm.com/locations.

(includes planting guides and timetables for where you live)