I could see fish 23 feet deep on my depth finder at Lewis Smith Lake. When I let my live bait down, I watched my bait in relation to the fish and spotted a 12-pounder moving toward my bait. My rod tip bent down and kissed the water, as my drag screamed the song of successful freshwater striped bass fishing.

When Alabama’s population centers grew in decades past, due to the increase in manufacturing and medicine, the need for more electric power became paramount here and in Georgia and  Florida. To solve the problem, power companies in these three states built dams on many rivers and streams to produce hydroelectric power.

Prior to the building of the dams, anglers in many river systems flowing into the Gulf of Mexico caught saltwater stripers there. In the late 1960s and early 1970s, fisheries biologists discovered that fewer stripers were being caught in Alabama waters.

In the 1960s, striper anglers believed that a striper was a striper. However, once biologists identified the two separate and different strains of saltwater stripers, the Atlantic strain and the Gulf Coast strain, the fisheries departments of Alabama, Georgia, and South Carolina along with the U.S. Fish and Wildlife Service made a concerted effort that has been very successful saving this Gulf Coast strain of stripers.

“Smith Lake is where my father taught me how to fish,” explained Bill Vines of Morris, Alabama, who began fishing for stripers at Smith Lake in 1988. “I started taking friends and family striper fishing and guiding some. I began guiding stripers full-time in 1991.” 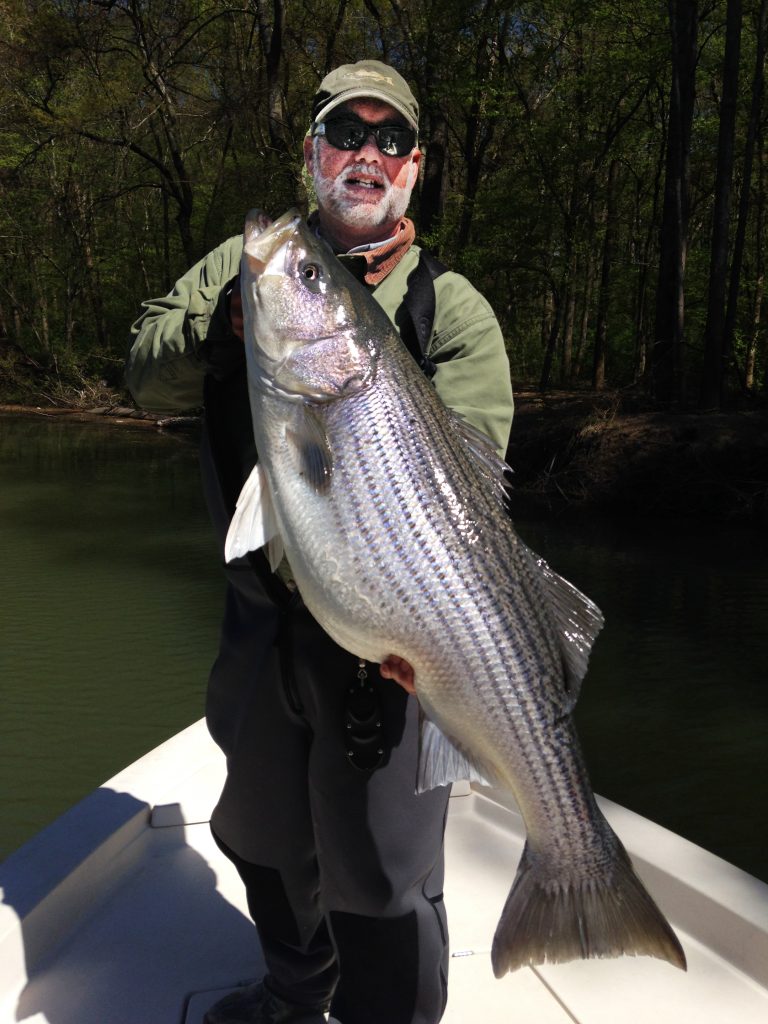 Bill Vines shows off one of the monstrous-sized Gulf Coast strain of stripers taken from Smith Lake.

Vines considers blueback herring and gizzard shad the best bait for striped bass. He primarily uses them to catch the stripers that usually hold from 20-60 feet deep during the late summer and early fall at Smith Lake. Blueback herring aren’t native to Smith Lake but have been introduced by fishermen bringing these bait fish from other waters where stripers had been caught.

“We catch our bait in either a cast net or with a sabiki rig (a line with several small flies attached to it with a sinker on the end of the rig that, when cast out to bait fish, is small enough for the bait fish to attack and then get hooked by the tiny hooks in the individual flies attached to the rig) that’s used on the Gulf Coast to catch live bait. However, I’ve found that we catch more bait fish quicker in a cast net.”

Vines usually catches his bait by throwing his cast net at night around lights on boat docks.

“I use my depth finder to locate the schools of herring and shad I want to catch, and then I throw my cast net in to cover the school. When I pull my net up, I’ve captured these bait fish alive. When the bait fish are thick around the lights, on piers and docks, I often can catch 100 of them with one throw of my cast net. But sometimes I’ll only catch two or three, depending on how deep the bait fish are holding, and how many of these baits are in a school that I find,” Vines said. 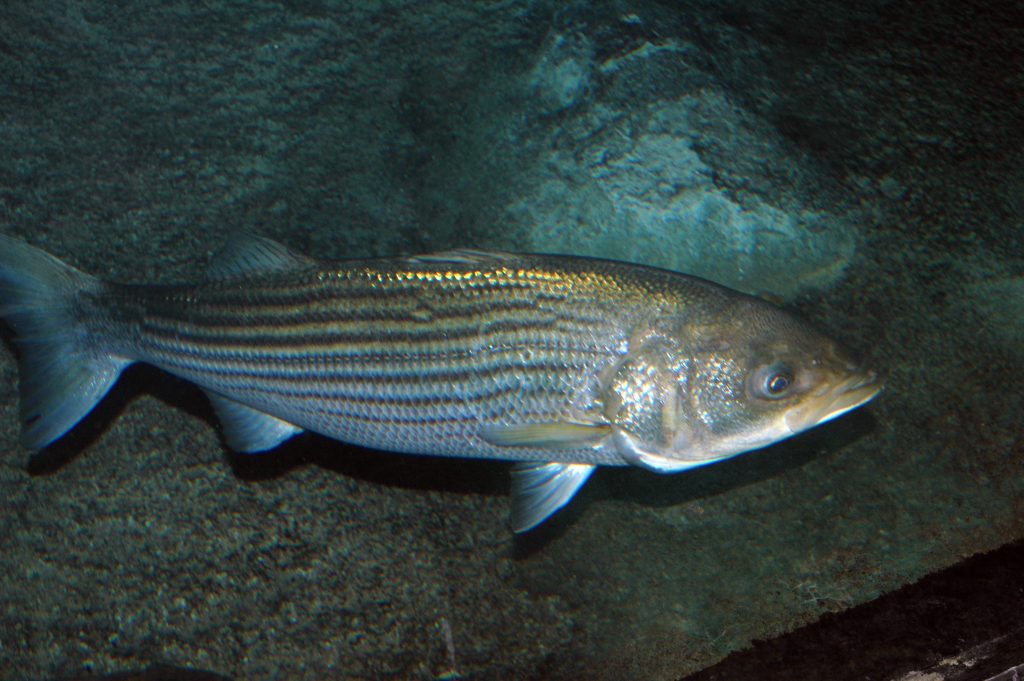 The striper is an open-water fish that follows schools of shad on which they feed.

On an average day or night of freshwater striped bass fishing, Vines and his party generally will fish 50 of these live baits. To keep them lively and frisky, he uses an insulated bait tank and puts ice in it. Also, this tank has a filtering system to keep the water in the tank clean.

“Using this tank system, we can fish with live bait all day long – even during hot weather in August and September,” Vines explained.

Vines not only uses his Lowrance depth finder to locate the bait, he also pinpoints freshwater striped bass with it.

“I find stripers during this time of the year around the mouths of major creeks or main lake points running into the lake in 25-30 feet of water. When I idle across a school of stripers I’ve seen on my depth finder, I’ll turn my big engine off, place my trolling motor in the water and start putting bait on hooks to send down to the stripers,” Vines explained.  “I vary the depths I want my baits to fish but do try to keep my baits at the same depth or somewhat above where the stripers are concentrating.”

“I fish with fluorocarbon leaders, three footers at night and four to five feet long during daylight hours. My rig is much like a Carolina rig. I’ll put a two-ounce slip weight up the main line and a glass or a plastic bead below the weight, tie the main line to a barrel swivel and then tie my leader to the other end of the barrel swivel. On the end of the line, I’ll attach a circle hook,” Vines noted. 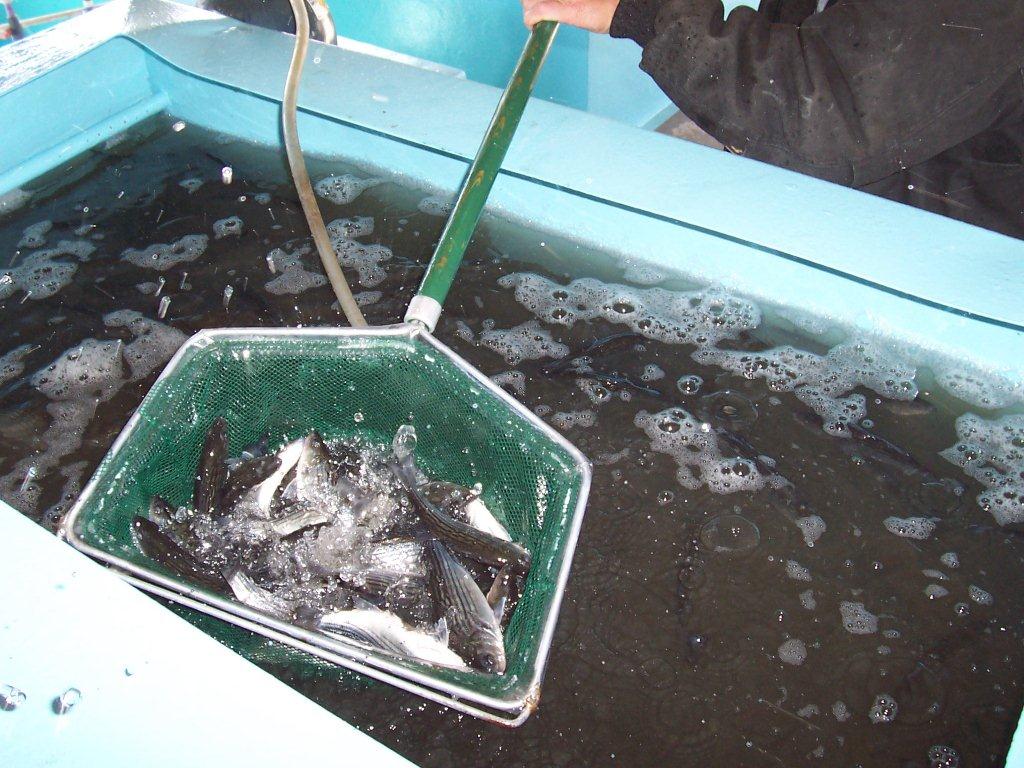 When the blueback herring were put into Smith Lake, they became a primary bait fish for the spotted bass and the striper.

During the summer, Vines’s striped bass baits will be four to five inches long. He hooks them coming from the inside of the mouth and out the nostrils. If the bait is relatively small, he’ll put the hook through the bottom jaw of the bait fish and bring it out of one of the nostrils on the head of the bait fish. If he’s fishing the small herring, he’ll use a No. 1/0 Owner or a Gamakatsu circle hook.

After Vines has baited his hooks and lets the baits down to the water depth where he sees the stripers, he puts all his rods in rod holders. First-time striper fishermen often ask, “How will we  know when to set the hook?” Vines tells them they’ll know they’ve hooked a striper when the tip of the rod goes down under the water.

“I’m often asked how many stripers we’ll catch in a day. That number’s often determined by how many fish we find. The last party I took at the time of this writing caught nine stripers for a four-hour trip. We average about five to nine stripers caught on a four-hour morning trip. Although the biggest fish we caught on this last trip weighed 20 pounds, the average striper will be from 10-20 pounds,” he said.

Vines emphasizes that an advantage of freshwater striped bass fishing at night is that the air is much cooler and there is less activity on the water.

“We dodge the boat traffic, jet skiers and the water skiers. Many of the anglers I take fishing work during the day but can striper fish at Smith Lake at night,” Vines said. “Later in the summer, when the water becomes very hot, we seem to catch more stripers at night than we do in the daytime. When fishing in the daytime, stripers generally bite at the crack of dawn. Since that bite won’t last very long, we don’t catch as many stripers as we do at night. Fishing at night, we start right at dark and catch a few stripers. As the night becomes darker, we generally start catching more fish. On an average night’s trip, my customers will catch from 8-10 stripers.”

Other lights Vines fishes are called monster lights, generally found on a dock in 10-25 feet of water that give off a green glow underwater.

“Sometimes we’ll see the stripers swimming around and through the deeper lights and often fish right on the edge of the light instead of fishing over the light,” he said. 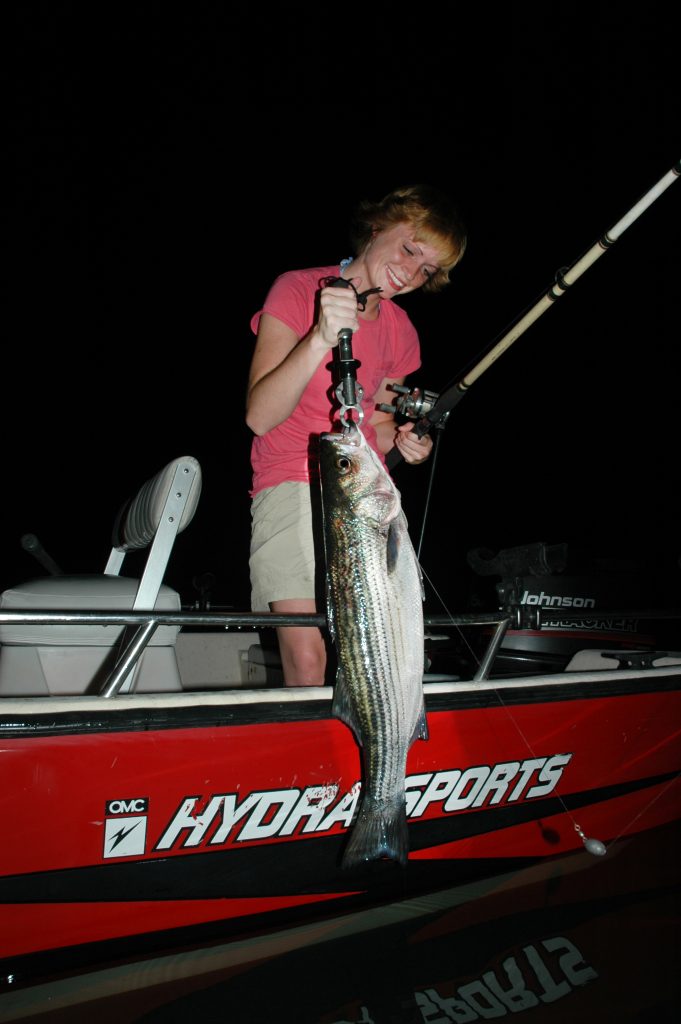 Fishing around dock lights at night can produce some fast, big-striper fishing on Smith Lake.

‘The majority of my anglers just want to catch and release stripers. However, about 30-35% of my clients want to keep and eat the stripers,” Vines said. I’m often asked, ‘How are you releasing stripers that you bring up from 60 feet deep?’ If we release a striper, and it won’t swim back down because its air bladder has inflated, we’ll pick the striper up and hook it to a device called a SeaQualizer Descending Device.

This pressure device hooks on the striper’s bottom lip and takes the striper down to whatever depth it’s set at and automatically releases the fish. I usually have the device set to release the fish in 50-60 foot deep water. Generally, the striper will acclimate to the depth from where it’s come. Now and then we’ll see one of the stripers we’ve caught and acclimated floating up back to the surface. When that happens, the striper becomes an ‘eater’ instead of a ‘releaser.’”

“The Smith Lake Gulf Coast strain of stripers are more heat tolerant than the Atlantic strain,” Vines explained.  “I believe the Gulf Coast stripers have a better survival rate during the hot summers than we have in Alabama. As they get bigger, they don’t die off when they reach a certain weight, like some of the Atlantic strain of stripers have done in some southern waters. Striper fishing has become so popular that now the State of Alabama has been restocking the Gulf Coast stripers back into Smith, besides sharing them with other southern states.”