How Oyster Farms Are Bringing Back Gulf Oysters

How Oyster Farms Are Bringing Back Gulf Oysters

Do you like your oysters raw, fried, steamed, grilled, baked or all of the above? When it comes to Gulf oysters, you really can’t go wrong. Delicious and tender, Gulf oysters have a mild and delicate taste that people from all over the country drive down to enjoy.

A tasty table fare savored by many locals and tourists alike, Gulf Coast oysters contribute significantly to the area’s economy, but their contribution toward maintaining a healthy Gulf ecology is even more vital.

Despite their simple appearance, oysters have a complex role in sustaining a healthy balance in the Gulf ecosystem, which means their rapidly depleting numbers are having a devastating impact on ocean ecology. Approximately 85% of oyster reefs across the world have disappeared, and the Gulf population hasn’t fared much better.

In fact, in Mobile Bay it is estimated that approximately 80% of oyster reefs have been lost from historic levels.

So, what does that mean for the health of Gulf waters? To understand the impact, you first need to know what role oysters play in their ocean environment.

Quite simply, oyster reefs protect the coast from erosion, protect marshland and estuaries where marine life is born, provide foraging and shelter habitat for fish, shrimp, crabs and other aquatic species, and most importantly, filter extreme amounts of water (50 gallons per day per oyster), making the water cleaner for all the species that live there.

Anthony Ricciardone and the other owners of Admiral Shellfish Company in Gulf Shores, Alabama, have made oysters their business. Although the aquaculture farm produces delicious, fresh raw oysters for the premium half-shell market, he says he and the other owners advocate for the renewal of wild oyster reefs because they fully understand the important role they play in the health of the Gulf.

They’ve educated themselves on the perils affecting the wild population so they can protect the farmed crop and help restore the natural oyster reefs.

Ricciardone says there are many reasons the wild oyster reefs have diminished. 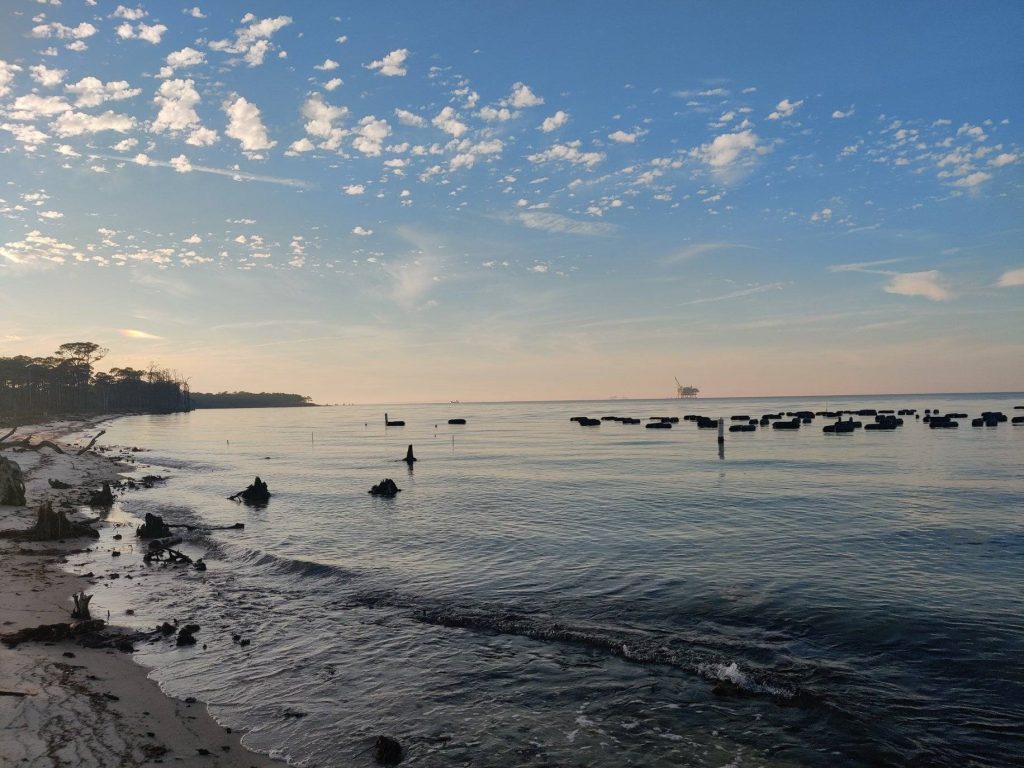 “There is not one issue; it’s a list. Changes in freshwater flows to the Gulf’s estuaries and bays from development, floods and drought have had an impact. Increases in sedimentation and silting, inconsistent replacement of cultch [the stuff oysters need to grow on], heavy harvesting pressure and the Deepwater Horizon Oil Spill have all negatively impacted the Gulf’s oyster population,” Ricciardone noted.

One historical event in particular had a major impact on the oyster reefs in Mobile Bay, but Ricciardone says very few people know about it.

“When I tell people about it, they’re often shocked,”  Ricciardone said. “Oyster larvae need somewhere to settle to become young oysters or ‘spat’ and then grow into mature oysters. This can’t happen easily on muddy or sandy bottoms. So, they build on each other’s shells. Over time this accumulation makes a huge foundation. That foundation traps sediment, which helps seagrass further away. It’s also hard for reefs to get established without this hard foundation.

“Historically there were acres of this stuff all over Mobile Bay – many feet thick supporting the sea floor. From the 1940s through the 1980s, this oyster shell foundation was almost all dredged up to be used as a commodity in road building. They harvested something like eight million dump-truck load equivalents. The concept of sustainability wasn’t in place back then, and now that this base is gone, it’s taking huge efforts to restore individual reefs. There needs to be a lot of oysters to make critical mass, where enough larvae can be put in the water to renew other areas that are harvested or taken by natural processes. The impact from years of dredging is devastating.”

Steps in the Right Direction

According to The Nature Conservancy, steps are being taken in all five Gulf states to restore oyster populations and promote a robust oyster fishery through both statewide and Gulf-wide initiatives.

There are also efforts underway to restore oyster habitats throughout Mississippi, Texas, Louisiana and Florida, especially in the Apalachicola region, which has been hit extremely hard in recent years. 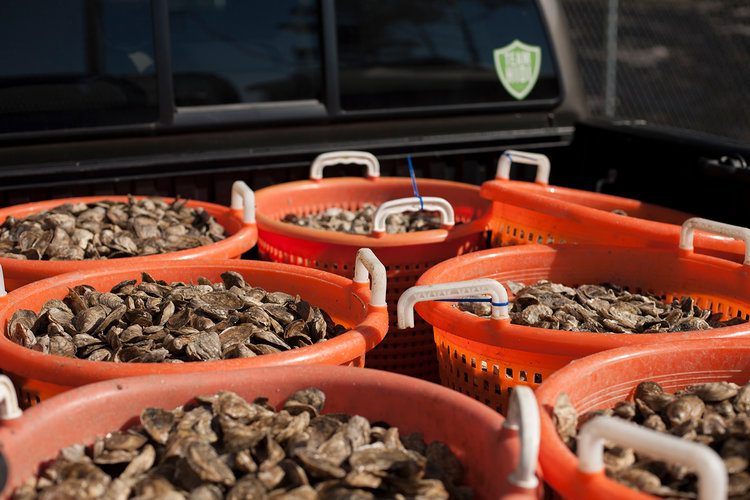 There is plenty of room for both farm-raised oysters and wild oysters. (Image provided by Oyster South)

“Historically, 90% of Florida’s commercial oyster production has come from Apalachicola Bay’s natural oyster reefs,” Ricciardone said. “In fact, at one time, it produced the vast majority of what came out of Florida and as high as 10% of the nation’s product. However, their oyster fishery is shut down until 2025 due to issues with water flow from usage and development upstream, and some say, overharvesting. You can’t imagine the impact it’s having on farms and industry families, and I know it would be devastating if it happened here.”

Oyster Farms to the Rescue

Beth Walton, executive director of Oyster South, a non-profit organization that connects communities and provides resources to foster the success of oyster farming in the southern U.S., says it quite simply, “More oysters in the water means a better environment.”

She says oyster farming offers both economic and environmental benefits through increasing sustainable oyster production, improving the health of the Gulf waters and providing delicious farm-raised oysters to the culinary community.

According to Walton, as more people learn about oyster aquaculture, the more popular it is becoming.

“When I first moved to Alabama at the end of 2008, there wasn’t a single oyster farm in the state,” she said. “Now there’s probably a dozen. Auburn used to hold an oyster-farming fundamental class in 2009/10, and each year they held it, more and more people would sign up for it.”

She says there’s a lot of risk when it comes to oyster farming but that hasn’t stopped the industry from growing.

“Hurricanes, storms and runoffs can destroy an oyster farm. Buying the gear, attaining the permits and locating the property takes time and a lot of investment. It can take years before the farmer gets a return on that investment. To put it simply, no one is getting super rich as an oyster farmer. But money isn’t why they do it. Many become oyster farmers because the lifestyle appeals to them. They love working outside, being their own boss, working with their hands and spending time with others in the community. Some have even turned their oyster farms into a type of tourist destination.”

While many who have made a living harvesting wild Gulf of Mexico oysters have embraced oyster farming, Walton says that they’re continuing their education initiative so even more will embrace the idea of aquaculture. 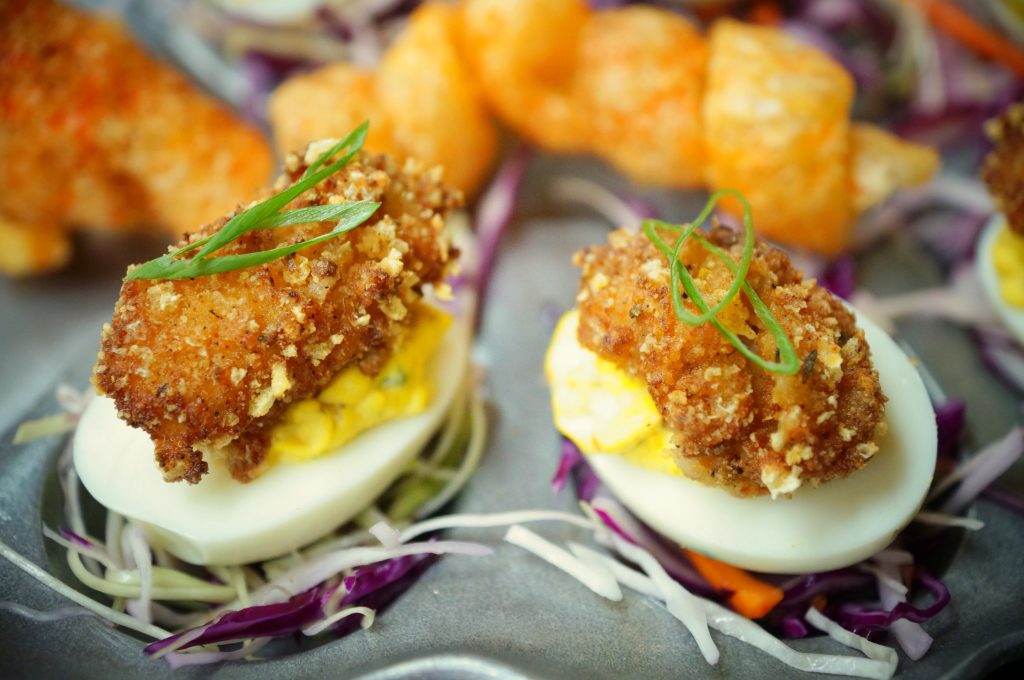 “There’s a learning curve,” she said. “We’re trying to explain that no one is trying to displace the wild fishery. There’s plenty of room for both. There are different price points and different experiences when it comes to dining on farm-raised and wild oysters. Those who want to have a few ice-cold beers and a sack of oysters on the deck are going to purchase wild oysters. Those dining at a fancy restaurant with a glass of wine will most likely order a dish made with farm-raised oysters. Plus, if farmers are growing diploids, it may help as they will likely contribute larvae to the water. Oyster farming and fishing can indeed coexist.”

Ricciardone explains that topwater oyster aquaculture takes the pressure off the wild oyster population, thus aiding in the recovery process. Plus, the oysters they produce are top-quality and delicious, which helps out the restaurants in the area.

“As the natural reefs are declining and becoming less predictable, technology use can provide a premium Alabama oyster,” he said. “Our cages at Admiral Shellfish Oyster Farm float on top of the water, so they are away from predators, low oxygen and silting-up conditions. They are held in the choice water column. We tumble and shake them to give them shape. As we chip the lips off of them, they form a deeper cup, with a good bit of meat and a nice, petite shape. Our oyster farm is located right near the pass to the Gulf, so we get a huge tidal flush every day, even when we don’t have a big tide. All of these elements make for a salty, clean-tasting product.”

In addition to providing delicious oysters to the half-shell market, Admiral Shellfish Oyster Farm is teaming up with a variety of research and advocacy groups to help reestablish the natural oyster reefs in the area. The farm hosts Mobile Bay Keepers and Auburn University, which is working on a large-scale project onsite that is funded by the Alabama Department of Conservation.

“The project involves new technology for off-bottom aquaculture, which can help natural reef restoration efforts by providing the main input they need — live oysters and critical mass for spawn. They are also trying some different techniques to make farms predator-resilient and increase the density a farm can produce,” said Ricciardone.

A Chef on the Front Lines

Executive Chef Irv Miller of the famed Jackson’s Steakhouse in Pensacola, Florida, and author of the cookbook Gulf Coast Oysters: Classic & Modern Recipes of a Southern Renaissance, is a champion of the Gulf Coast oyster and says his book was created to spread awareness about success of growth and expansion of oyster farms along the Gulf of Mexico. He says he’s thankful so many are working to build back the oyster reefs and acknowledges the importance of oysters both to the Gulf economy and the ecosystem.

“As a chef, I fell in love with oysters when I relocated to the Gulf Coast in 1982,” Miller said. “Because my career was Destin-, Seaside- and Pensacola-based, Apalachicola was my go-to as I discovered Gulf Coast oysters. Tonging for oysters has been part of our coastal food culture for over a century. In a very primitive way, shucking and slurping an oyster connects me to the past.” 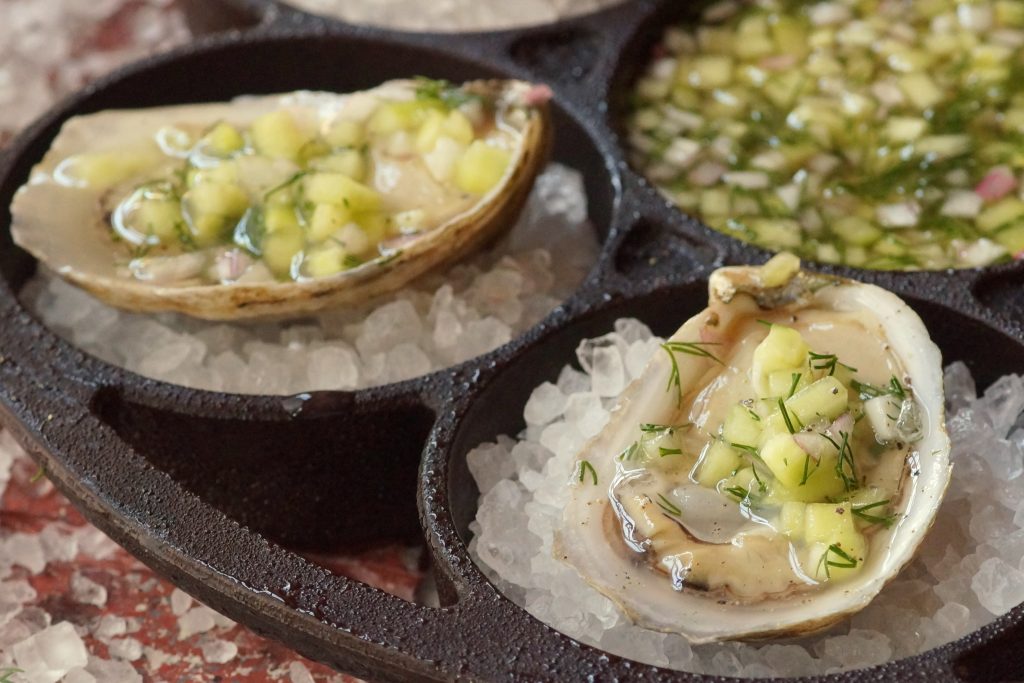 Cucumber Mignonette Sauce is one of the many delicious farm-raised oyster recipes prepared by Chef Irv Miller of the famed Jackson’s Steakhouse in Pensacola, Florida, and author of the cookbook Gulf Coast Oysters: Classic & Modern Recipes of a Southern Renaissance. (Image provided by Bill Strength Photography)

He says the flavor profile of a Gulf Coast oyster can vary from state to state as well as bay to bay, depending on location, habitat and lifeblood. Typically, if there’s not been too much rain, Gulf Coast Oysters tend to have a varying degree of up-front brine and a clean miso-like sweet finish.

“My interest in writing about oysters began as I stayed connected to the decline of the Apalachicola oyster through the decades. I did some work with wild farmers in Apalachicola to help them any way I could, and to bring attention to both the diminishing oyster population and depleted wild oyster beds. I have been a chef on the frontlines all along, and felt there was no one better than me to tell the story of the Gulf Coast oyster’s revival.”

He acknowledges that the Gulf Coast is famous for the wild oyster and introducing a smaller craft oyster has been a culture shock to the area.

“But, I’m out to change that perception. Aquaculture compliments the wild oyster and perpetuates reef restoration projects. While we restore our reefs, we can also celebrate the hard-working farmer and his crafted oyster. There’s plenty of opportunity for both oysters.”