Most hunters think you can just go out and shoot a hog with minimal effort and skill. But that isn’t true. It takes adeptness, understanding, and sometimes even top-level knowledge to bring down a hog. Still, hog hunting at night offers a significant advantage for hunters as compared to hunting during the day.

But is it easy? Not quite. And it doesn’t offer an unfair advantage, either.

“Hog hunting at night isn’t necessarily an advantage, but more specifically gives you additional opportunities to be more successful in managing a hog problem on your property,” said Chuck Rubac, a former US Navy SEAL sniper, hog hunter of 35 years, and special operations technical advisor for Photonis Defense USA.

“In fact, if you understand that many female hogs can breed two times a year, and throw one to 12 piglets at a time, and breed as young as six to eight months, you can see the math adds up very quickly.”

Hogs are a mostly nocturnal, invasive species so hunting them at night gives hunters the best chance to thin out their numbers.

Beyond that, why would you want to give an invasive species an edge of any kind anyway? If that problem isn’t enough reason to move in and kill some hogs at night, realizing these animals are mostly nocturnal might provide additional incentive. While they move during daylight, it’s generally limited to cold and/or rainy days, or under other circumstances that get deer up on their feet.

“Hogs can be very active at night under certain conditions,” Rubac said. “Hogs can go nocturnal with too much hunting pressure. They will also respond to seasons that will increase their nocturnal activity. With the proper equipment and training, hunting at night is not much different than the daytime.”

All things considered, here are 15 tips to help when hunting wild hogs at night.

One of the best things you can do is select the right gun for the job. Most people prefer an AR-style platform, but a good bolt-action rifle works just fine, too. But the best advice is to take whatever you’re the most confident with. You’ll use it much better under pressure.

“Make sure you have selected the best equipment,” Rubac said. “A hunter needs to know and train with the equipment [they] are going to use.”

Stephen Lee, owner of Intercoastal Safaris, says pay attention to your mobile device. “Before you even get in the truck, dim the light on your phone,” he said. “Then, turn the phone on silent, not vibrate.”

According to Lee, another mistake hunters make too often is spotlighting fields.

“They should be using good night vision instead of spotlighting,” he said. “Don’t spotlight fields. Scan them with your night vision. Depend on it as much to scout as you do to hunt.”

As mentioned, where legal, using night vision is one of the best things a hunter can do to increase their odds of success on nighttime hogs. Both Rubac and Lee recommend using it. It certainly makes a difference in your ability to see, and to prevent hogs from seeing you. 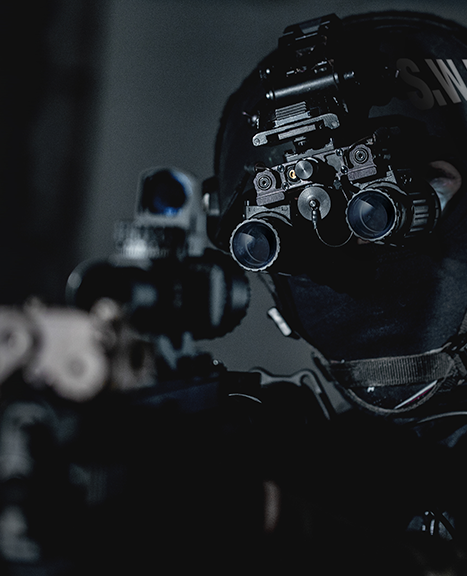 “Most hunters bag one hog, maybe a few more per hunt,” Rubac said. “If you are only hunting during the daytime, your ability to gain control of your hog population is not in your favor.”

Some might not think clothing matters all that much at night, but it does.

“Navy blue is better than black, and better than camo,” Lee said. “If you put three people in the field, one in black, one in navy, and one in camo, navy blue is the more natural color for night light. I strongly consider it. If hunting in the woods, camo is better. But black is visible at night, especially in the open.”

Of course, there are certain types of hunting. Stand or blind hunting, still hunting, spot and stalk hunting, and other approaches are all viable options. The key is to determine what works best for the situation you’re in and go with it.

“Know your hunting area and study up on the animal you will be hunting,” Rubac said. “Obviously, you need to make sure that you comply with your local and state laws regarding what you are allowed to do.”

Another thing hunters can do (in some areas) is bait hogs. If you can, give it a try. It’s a great way to get pigs on a pattern, lure them out into the open, and even position them for shot opportunities. Timed feeders work best for this. 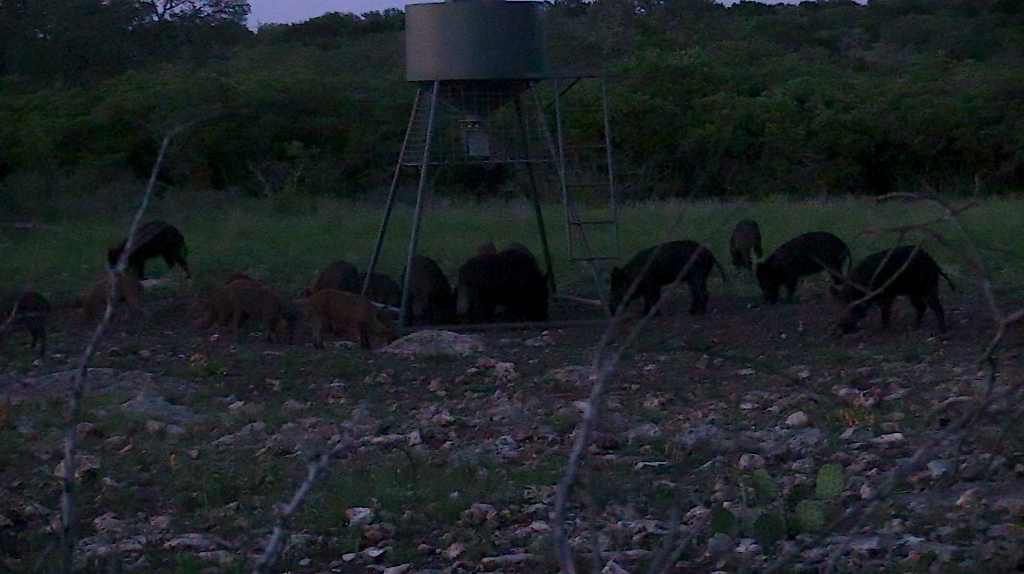 Hog hunting at night isn’t the cakewalk that some hunters think it is. (Honeycutt Creative photo)

Still can’t figure out those hogs? Keep scouting. Look for sign. In this regard, it’s no different than hunting other game. Find the sign, find the game, get it done.

Those who prefer to hunt with archery or other short-range equipment will need to pattern hogs more than those who use long-range rifles. Like other animals, hogs tend to follow a “bed-to-feed” pattern.

Hogs are hungry. Period. Find the grub and that’s where these animals will be. They like crops, hard mast, such as acorns and nuts, soft mast, such as apples, peaches, and persimmons, and even areas filled with insects where they can root around.

Food is good, but hogs drink a lot of water, too. In areas where it’s concentrated, this might be a good play. Camp out over it and wait for the hogs to come to you.

Pigs can’t see well, but their hearing is good, and their nose is phenomenal. If you don’t keep the wind in your favor, you don’t stand a chance. Keep that in mind. 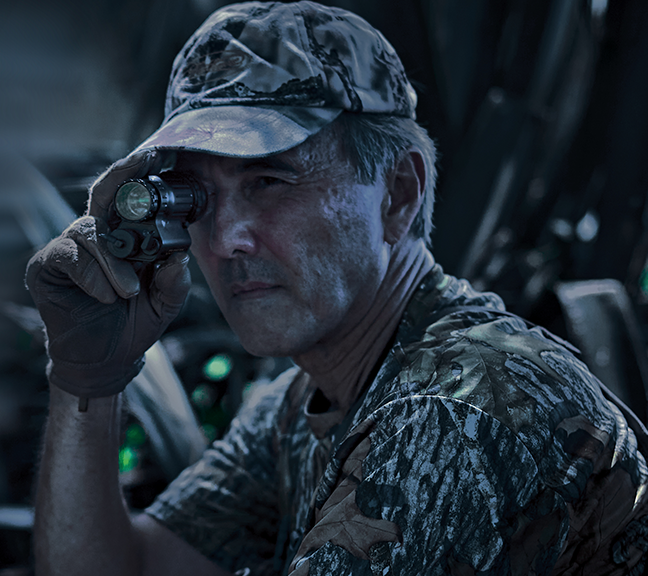 A good night vision monocular can make scouting and glassing at night much easier and more effective. (Photonis Defense photo)

If you still can’t seem to find hogs when you’re pig hunting at night, camp out along open fields where you’ve seen plenty of rooting. At some, those pigs will cruise through there. Be there when they do.

Pigs have thick shoulders. It can be hard to jam a broadhead through there but rifles were meant for it. Hitting them in that shoulder transfers a lot of shock, but also passes a bullet through vitals. Put them down quickly, as pigs don’t bleed well.

Just because you are night vision hunting and scouting, doesn’t mean you shouldn’t bring good lights for post-kill activities. It helps to have this, especially when the hunt is over and you’re gutting and cleaning an animal.

“When people go hog hunting, they think they’ll be running through the woods,” Lee said. “They try to get these big, huge lights. The best thing you can do is get a good headlamp. It’s a safer, more versatile option, as compared to a spotlight.”

Those who are night hunting for hogs and looking for a good monocular should consider the Photonis Defense PD-Pro-16M Monocular NVG. It’s a high-performance night vision system that’s 58% smaller and 35% lighter form factor when compared to the average 18mm monocular system on the market.

It features a Photonis 4G 16mm image intensifier tube, as well as UltraLight, Hypersense, SpecOptics, and 4G technologies. It also has a horizontal FOV of 41 degrees and vertical FOV of 40 degrees, focus range of 9.8 inches to infinity, and spectral sensitivity of below 400nm to above 1,000nm. 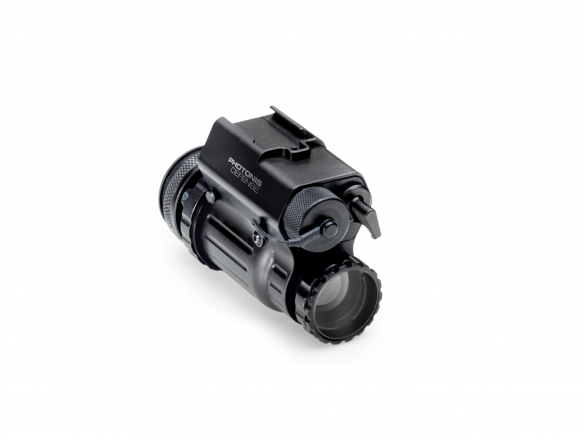 It even sports an auto-gated Photonis 4G 16mm tube type, battery life of 25 hours at 72 degrees (F) with lithium battery, and an operating temperature range of -60 degrees (F) to 131 degrees (F). It weighs 9 ounces and is submersible up to 66 feet. Comes in white or green phosphor. Only available in the US.

The new Photonis Defense PD-Pro-16B Binocular NCG is an excellent choice for night vision hog hunting and meets all critical needs. It’s the lightest binocular device on the market. It features a Photonis 4G 16mm tube, as well as UltraLight, Hypersense, SpecOptics, and 4G technologies. Its horizontal FOV is 41 degrees and vertical FOV is 40 degrees, focus range is 7.9 inches to infinity, and spectral sensitivity is below 400nm to above 1,000nm. 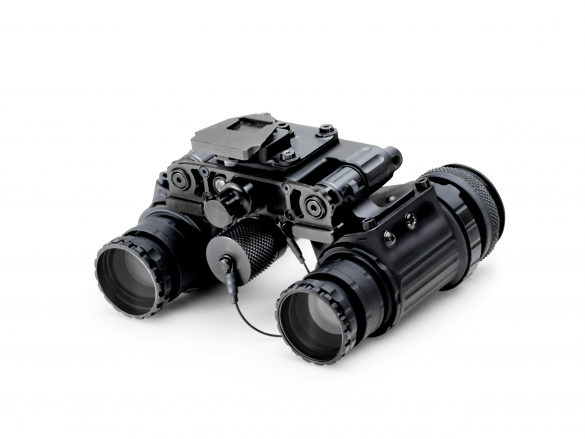 It even sports an auto-gated Photonis 4G 16mm tube type, battery life of 20 hours at 72 degrees (F) with lithium battery, operating temperature range of -60 degrees (F) to 131 degrees (F), weighs less than 12 ounces with internal battery, and is submersible up to 66 feet. Get yours in white or green. Available only in the US.