How To Find Crappie Before The Spawn – 15 Locations

How To Find Crappie Before The Spawn – 15 Locations

Alabama’s crappie season generally starts in February. Veteran crappiers know they can catch the biggest and the most crappie that month, before the speckled sides go to their beds. Prespawn crappie often are the most-dependable crappie you can catch all year too. However, you must know how to find crappie if you are going to catch crappie. Here are 15 places to look for crappie in the prespawn.

1. Ducks Mark the Spot – On water systems with dewatering areas for waterfowl, late February or the first half of March marks the time when the water from these duck ponds will drain back into the river. Warmer than the main body of water and often loaded with nutrients that draw bait fish, this water attracts large numbers of fat, prespawn crappie. Fish the areas where this water reenters the main river. Look for shallow bays, beaver ponds or big shallow sloughs cut-off from the main river. 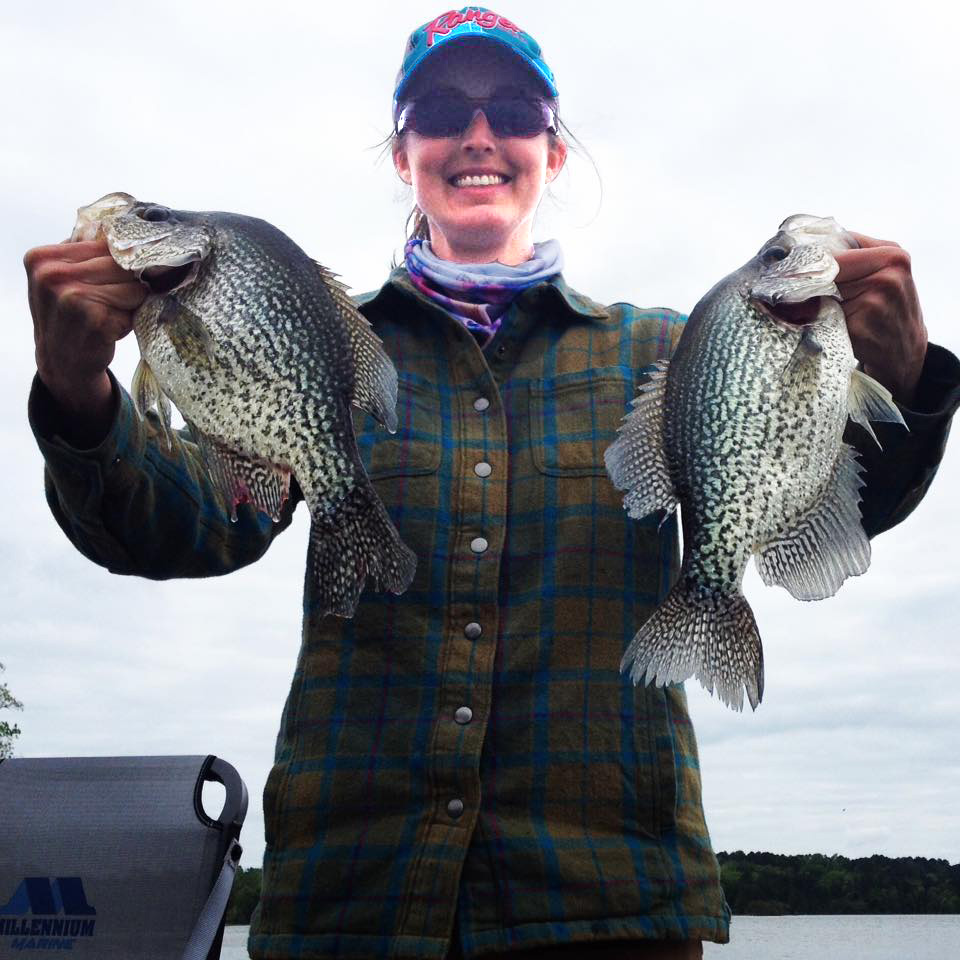 Alicia Phillips of Wetumpka shows off some of those big, fat prespawn crappie you can catch during February.

2. Bass Fishermen’s Hotspots – Bass fishermen often build brush shelters at the mouths of creeks on points. During the prespawn, crappie will hold on these brush shelters on points that lead into creeks where they’ll spawn. When you hear bass fishermen reporting strikes on points with no success, more than likely they’ve had crappie attack their baits instead of bass.

3. Crappie in the Mouths of Creeks and Open Waters – Before the crappie move-up into the creeks to spawn, they often suspend in large schools in the mouths of creeks and in open water 50-200 yards from the mouths of creeks. To catch these fish, either troll, or cast jigs through the schools. Once you start to catch crappie, drop a buoy to pinpoint the school and cast to it. When the crappie quit biting, use your depth finder to relocate the schools, and change the color of your jig to continue to catch crappie from that same school.

4. Ledge Trolling – During the prespawn, crappie frequently will hold on underwater creek ledges close to the spawning grounds. By using your trolling motor to move very slowly along the edge of a creek channel, you may catch large numbers of big crappie when you troll jigs. Definitely one of the best ways to catch crappie. 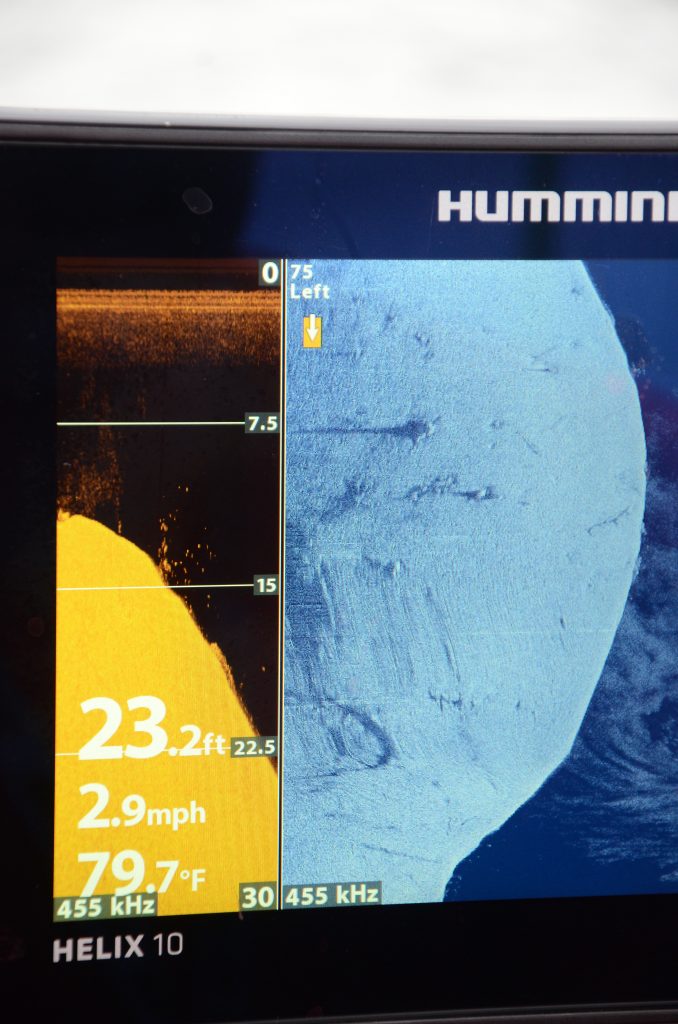 Thanks to more-sophisticated electronics, crappie fishermen often will locate crappie on the edges of drop-offs and ledges after searching for the small dots above the 15-foot marker.

5. Minnow Trolling – Place a 1/4-ounce sinker on the end of your line. Then 18 inches below the sinker, tie a 6-8 inch loop in the main line. Put the end of the loop through the eye of the hook and then over the point of the hook. Next, pull the loop back to the eye of the hook. This technique will hold your hook in place and away from the main line. Move 18 inches up from the first loop, and tie a second, 6-8 inch loop in the line. Attach a hook in the same manner as you have previously. Bait both hooks with minnows, and lower the lead down until it touches the bottom. Then reel it up 6-12 inches off the bottom.

6. Concrete – During the winter months before the spawn, prespawn crappie will look for warm water close to deep water. Concrete bridges, locks, dams and piers will catch the heat from the sun and transfer that heat into the water. Many anglers have had success taking crappie during the prespawn near a concrete loading dock on the edge of a creek channel. If you build a brush shelter next to the concrete too, you’ll have one of the most-productive spots on the lake or river to catch crappie.

7. Underwater Highways and Railroads – Underwater places where railroads and highways once crossed creeks and rivers may hold plenty of prespawn crappie.  Also, underwater bridges, bridge pilings and other vertical structures will provide places for crappie to hold near almost any depth of water where they feel comfortable. Also, remember that there will be drastic water changes usually present on either side of bridge pilings, due to the fact that engineers often construct pilings on the edges of underwater creek channels. 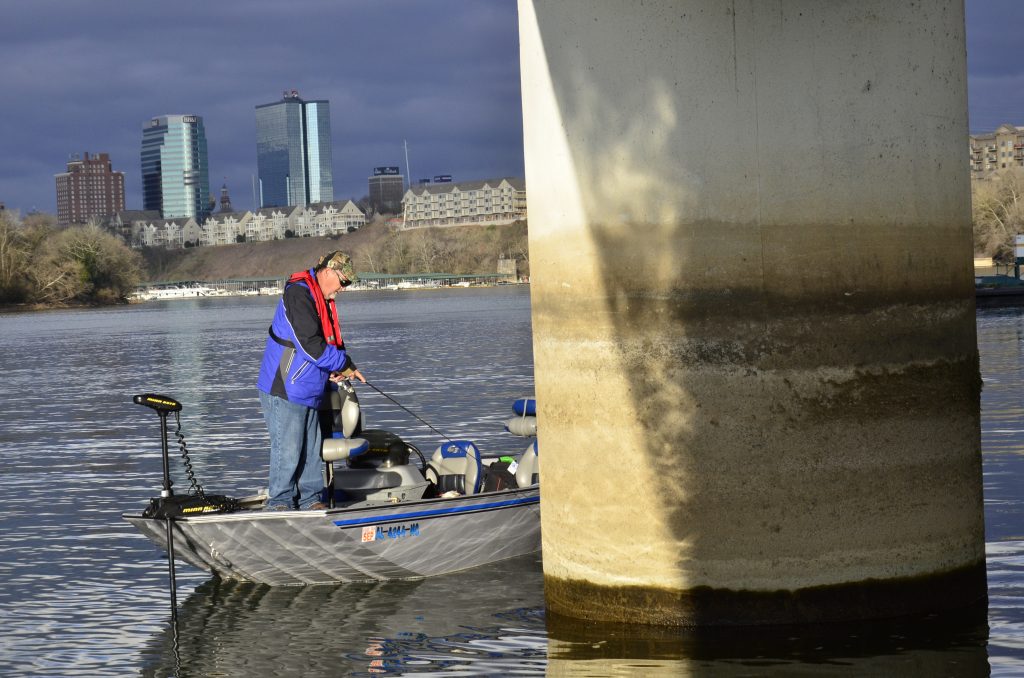 8. Rough Stuff – To catch prespawn crappie, you’ll often have to fish in some of the thickest cover you can find in deep water. Many crappie fishermen will fish the outside edges of that cover. However, if you want to catch the most and biggest crappie, fish right through the heart of the thick stuff. As one old timer once told me, “If you’re not breaking off jigs, straightening hooks, busting your line and losing your leads, you’re not fishing where the crappie are during the prespawn.”

9. Docks – Lake residents can show you where to find productive brush piles that hold crappie in the prespawn. If you notice a dock that either has poles on it or pole holders on the front, there’s a very-good chance you’ll find a hot, prespawn crappie spot in front of that dock. Often residents will build brush shelters about a pole’s length from the ends of their docks in 8 to 15 feet of water that will hold crappie.

10. Cover Is Important – During the prespawn before the crappie move shallow, you’ll find fish under stumps, roots and brush that you won’t spot on your depth finder. For this reason, search for cover. Even if you don’t see any crappie, fish through and around the underwater cover. 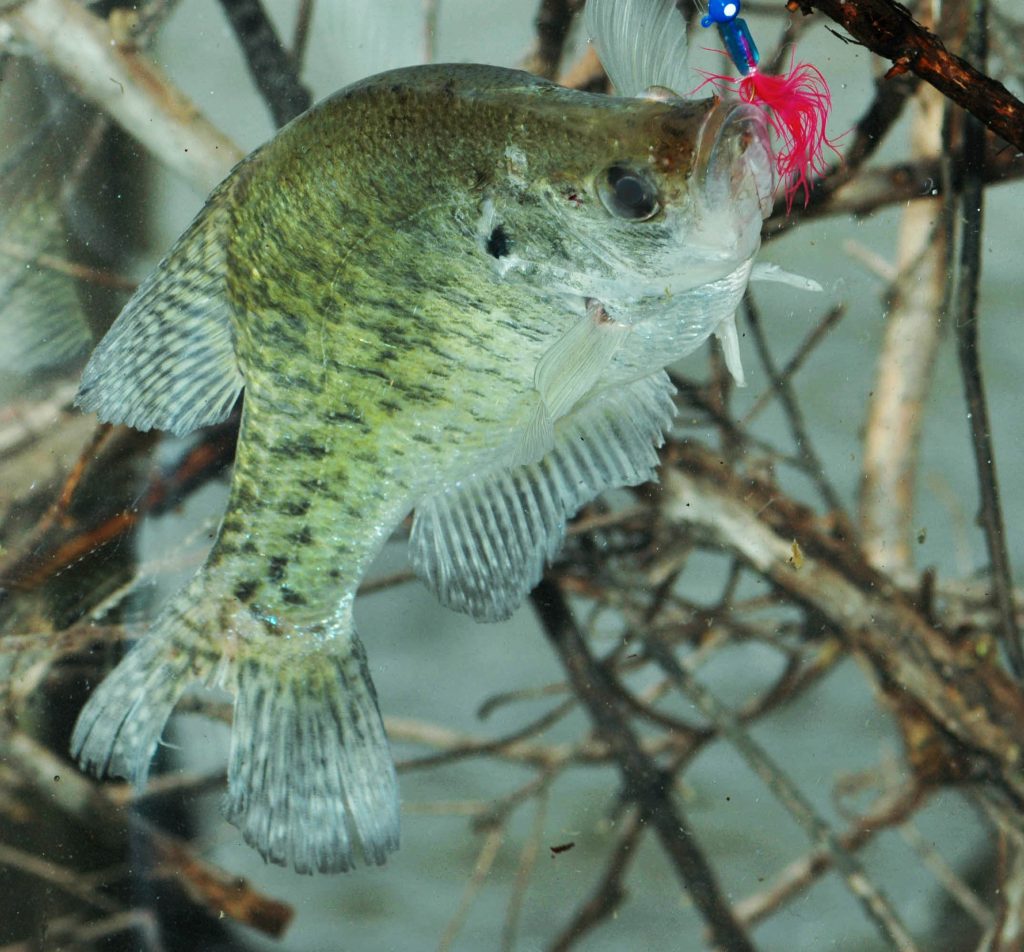 If you’ll put a jig in thick cover during the prespawn, you often can bring a crappie like this to the surface.

12. Large Schools of Shad – When you’re on a river where you can see seagulls diving on shad, you’ll have pinpointed a productive place to catch prespawn fish. Crappie below the school will force the shad to the surface where the birds will attack them. Fishing jigs or minnows under diving birds will allow you to locate and catch plenty of crappie. On a warm day, during the prespawn, you can spot the schools of shad on the surface, even if you don’t see a bird diving on them.

13. Ditches and the Ends of Creek and River Channels – On major reservoirs, crappie preparing to spawn generally will run up creek and river channels and wait in a hole or a deep spot at the very end of a ditch or a small creek channel for the warm weather and the correct water temperature to move out on the flats to spawn.

“During the prespawn and the postspawn times, I usually can find crappie ganged-up along ditches, cuts and the backs of little creek channels,” explains veteran angler Charlie Ingram of Eufaula, Alabama. “Many times in the backs of these ditches, I can sit in one spot and limit-out on crappie. Most of the time these crappie will be very aggressive, because they are trying to feed up ahead of the spawn.” 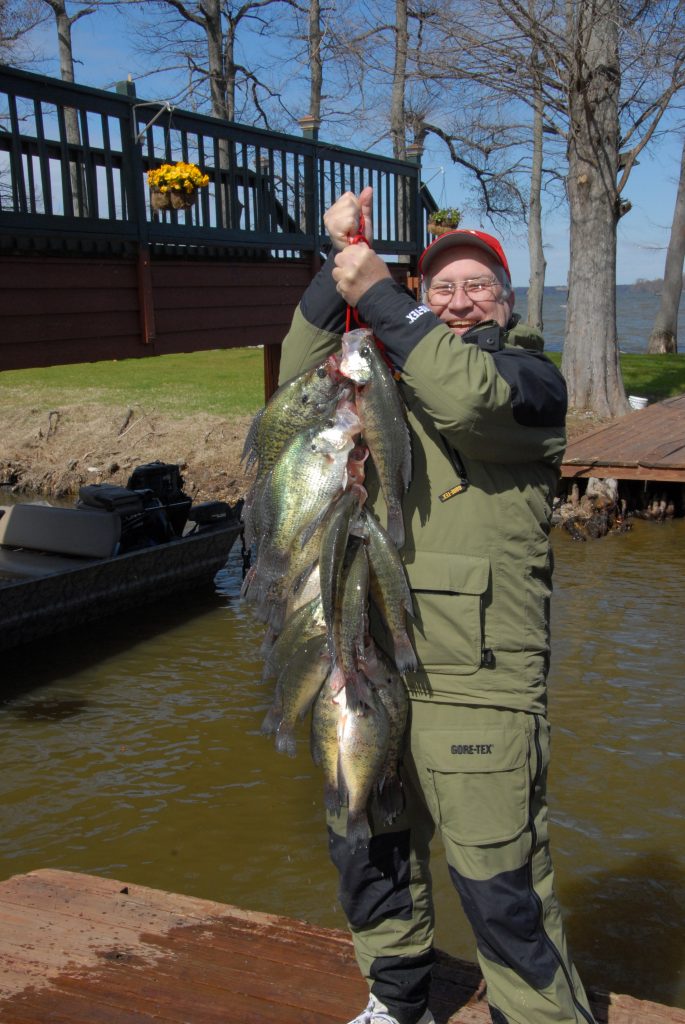 Pictured here is the author with a two-angler catch of fat, prespawn crappie.

Ingram believes that in order to be an effective prespawn fisherman, you must be able to read a depth finder and a topo map.

“The topo map will tell you where the small ditches, secondary creeks, and little cuts are. The depth finder will help you get on this structure and show you the cover and the fish holding there. During the pre spawn, I personally prefer to fish either the 3/4-ounce Jack Chancellor or the Hopkins jigging spoon, because I can angle vertically with it.  It’s a big spoon and produces large crappie.  Because of the jigging spoon’s weight, if I get tangled in cover, I can shake it free,” Ingram said.

14. Sight Fish – “I still find crappie the old way,” the late John Hill of Town Creek, Alabama, a nationally-known fishing guide on the Tennessee River, once told me. “Before and after the spawn, you can locate crappie in shallow water, if you know how to sight-fish for them.”

Although sight-fishing usually refers to an angler’s skill in seeing fish and then catching those fish, when Hill used the term “sight-fish”, he referred to his ability to read what was happening on the surface of the water to determine the location of the crappie.

“When you see diving and feeding coots or ducks along the bank of a point or in a cove before or after the spawn, you know a school of shad is in the area,” Hill explained. “Usually crappie will be under or off to the side of the school of baitfish feeding on the same bait the waterfowl are eating.”

Hill also watched for diving gulls. He knew when seagulls spotted schools of shad swimming in open water and began to dive on the baitfish, the shad would move deeper into the water where the crappie were feeding. As the crappie attacked the shad and forced them to the surface again, the gulls would dive on them. The crappie in the water and the gulls above would yo-yo a school of shad, as both predators fed on the bait.

“Often shad feed along the top of the water with their mouths just out of the water,” Hill commented. “When you see crappie hit in the school of shad, you can go to the school and catch crappie during the prespawn.”

15. Little-Water Crappie Hot Spots – During the prespawn and the spawn, most major reservoirs will have a line of crappie-fishing boats around them, resembling a bathtub ring. Like you, I’ve seen some lakes where so-many crappie anglers line the banks that you almost can step from one boat to another. You don’t have to be a rocket scientist to realize that with that much fishing pressure, each angler is catching fewer fish than he will if little or no fishing pressure is present. 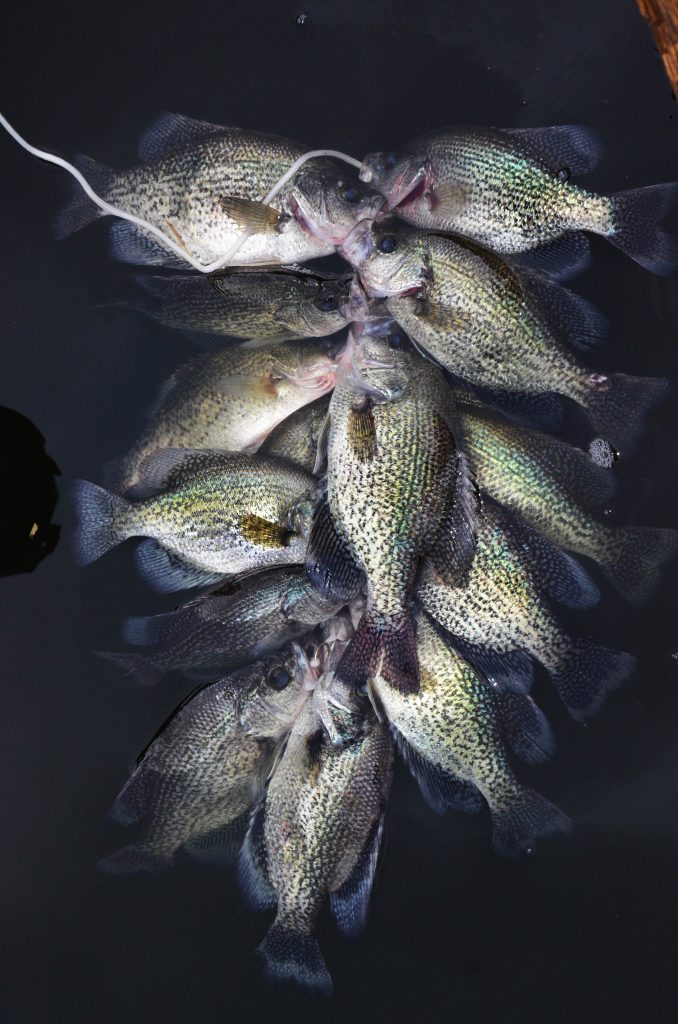 Instead of battling the crowds, move up small creeks and/or streams that feed these major rivers where bigger boats can’t get. You may not see another angler and may find outstanding crappie fishing. Often these feeder creeks will hold the bigger spawners and sometimes large numbers of these fish. If these feeder streams are warm-water creeks, the crappie will appear in these regions first. By fishing from the bank, you’ll often catch a limit of slab-sized crappie quicker and easier than the anglers out on the river will.

To pinpoint these little feeder streams, purchase maps of your area. Look for the streams that feed the main creeks or flow into the main lake. Another way to find small streams full of crappie is to call the fisheries biologists with Alabama’s Department of Conservation and Natural Resources. Oftentimes they can tell you where the best access points are to these little waters. Look too at road maps, and pinpoint the blue lines, denoting small roads through non-busy towns. Often you’ll discover great crappie fishing in the small creeks along the blue-line roads. 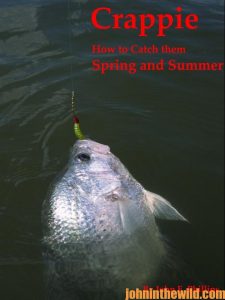 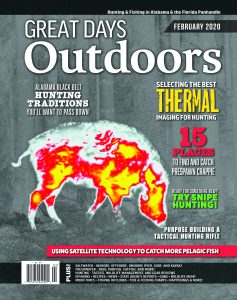 This article first appeared in the February 2020 print issue of Great Days Outdoors Magazine. For more great hunting and fishing content for the deep South, subscribe to Great Days Outdoors print and digital editions or click the image to download this issue.