How To Get Rid of Armadillos | Great Days Outdoors

How To Get Rid of Armadillos

How To Get Rid of Armadillos

About 500 years ago, Spanish explorers landed in South America and started naming things. They used their word for armor, armando, and added illo to the end, to name one peculiar-looking mammal. The literal translation is “little armored one.” Before their arrival, the Aztecs called it ayotochin or “turtle-rabbit”. In modern-day Brazil, it’s called tatu-galinha or “chicken armadillo”, but north of Mexico, it’s referred to as the “9-banded armadillo”. Little did they know, 500 years later, these armored pests would have folks questioning “what animal is digging holes in my yard at night” and “how to get rid of armadillos.”

There are more than 20 varieties of armadillo found in South and Central America. The smallest is the pink-fairy armadillo at about five inches long, and the largest is the giant armadillo that weighs up to 120 pounds. The 9-banded, or long-nosed armadillo, is the only one found in the U.S. and adults weigh 12-17 pounds.

It made its way into Texas through Mexico around 1850. During the Great Depression, some Texans called them “Hoover Hogs” and poor-man’s pork. In my neighborhood, they are called pests, and across their expanded range, they have garnered a variety of descriptive terms. 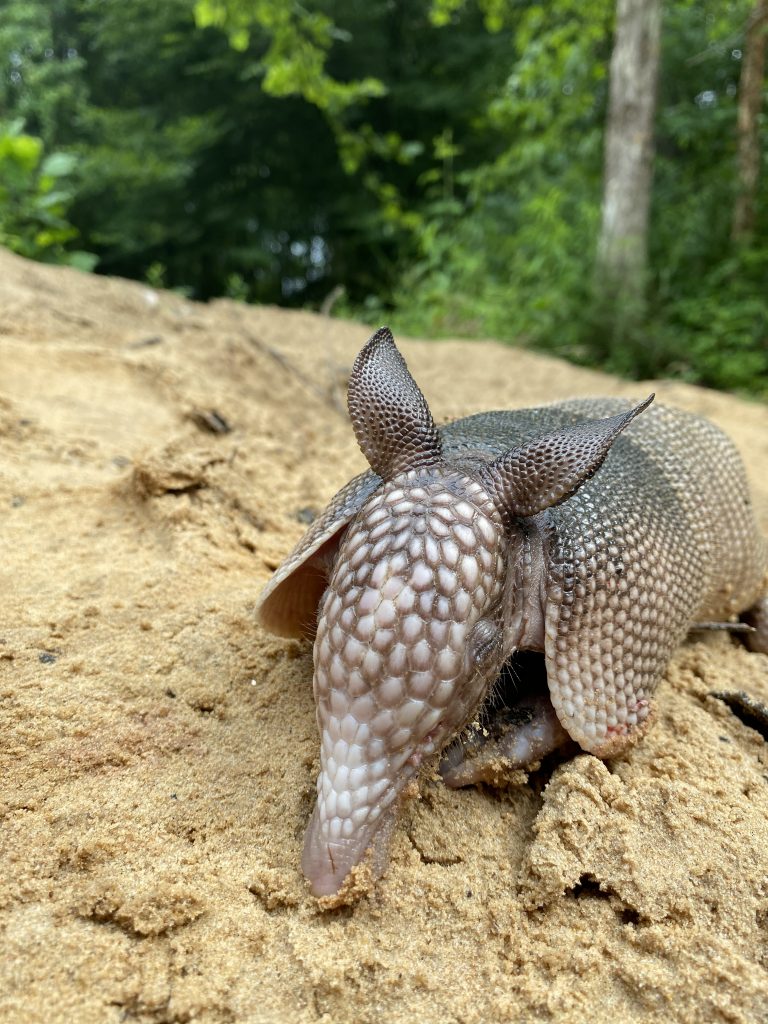 Armadillos are interesting looking creatures but they can also be serious pests.

There was an accidental release of captive specimens in Central Florida in the 1920s, and the first documented sighting of an armadillo in Alabama was in Mobile County in the 1940s. Texas and Louisiana were the routes for their eastward migration into Alabama, then into Georgia, and the Carolina’s. They have rooted their way to southern Indiana and Nebraska, and some speculate Canada is next.

I saw my first 9-banded specimen on the outskirts of Eglin AFB in Florida in the early 70s. The rustling of leaves nearby got my attention, and I stalked near enough to reach out and touch it. It didn’t seem to notice my slow movements, but then it sniffed loudly, jumped straight up, and took off. It seemed a bizarre-looking creature then, and it’s done nothing to change my opinion of it.

How to Get Rid of Armadillos In Your Yard

Several decades ago, they created enough holes in my yard that I set a few live traps. I would catch an occasional one, but I couldn’t consistently get them to enter my traps. I studied the issue and ordered some books on trapping techniques and trap construction. I built a wooden box-type trap with two sliding doors called a —Texas Armadillo Trap.

It worked reasonably well when I threw some damp soil and a few grubs or worms near the entrance. I increased the dimensions from the one in the book, and it was heavy, but the trigger was sensitive, and I caught a variety of critters, including a whippoorwill.

I’ve placed a wire live-trap in the edge of my yard over the last few years whenever those distinctive holes would begin appearing in my lawn.

This spring seemed different. Fresh dug dirt was evident on a near-daily basis. My first reaction was to put fresh batteries in my spotlight and adjust my air rifle sights. After losing much sleep, I had dispatched only one critter. I moved my wire trap to various spots with no luck and decided I needed some help.

Trapping or a well-placed projectile can be an effective armadillo repellent, but so can an electric fence wire placed three to four inches off the ground. I have a friend that used an insecticide specifically for grubs on his entire yard and has had no issues with the hole diggers since.

I talked to some guys in a local trapping group and decided to build a new wooden trap with the aid of the grandkids. After discussing some of the finer points of trap placement, we declared war on my yard varmints. We placed the wire trap to what appeared to be a faint trail coming from a nearby swamp. 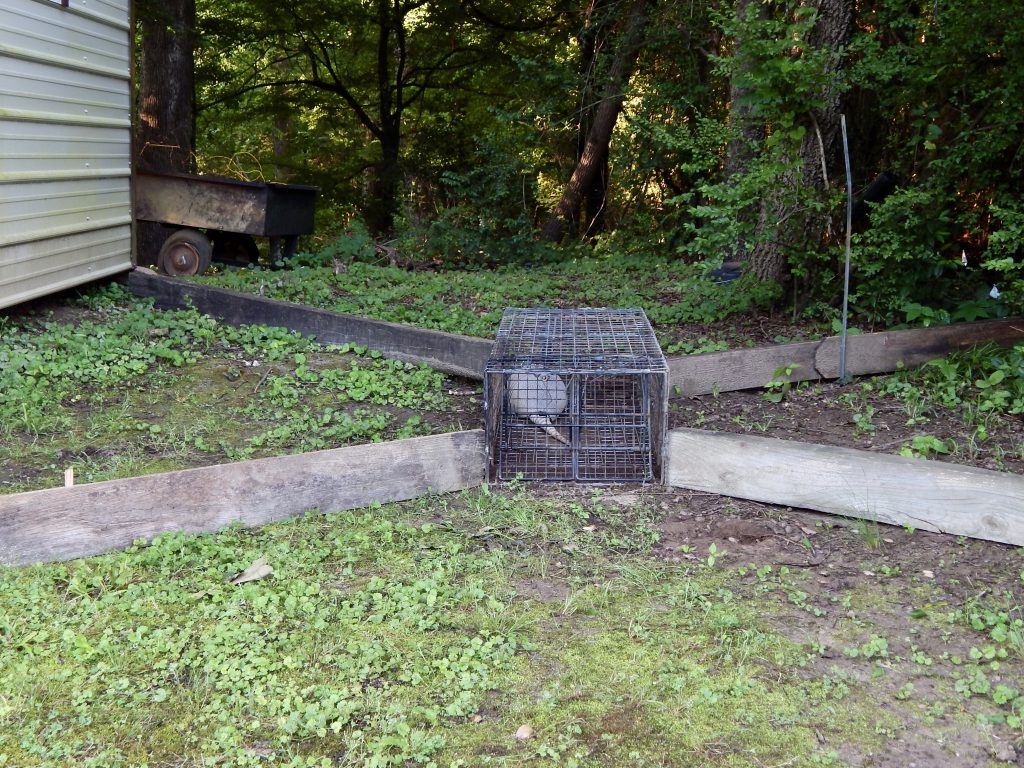 Try using boards to funnel the armadillos path into your traps. It gives them little choice as to where they can go.

After placing it near the yard’s edge, we put one by six inch boards at each end to funnel the creatures into the opening. The following day we were rewarded with two captive “turtle rabbits”, my first double catch. I decided to place them into the wooden trap to transfer their scent onto the wooden interior.

One of the most effective means to attract the critters is by using the smell of another armadillo. Trap placement, using boards, netting or blocks, and natural restrictions are the keys to trapping success.

What Do Armadillos Eat?

The primary armadillo food sources are grubs, worms, ants, and various insects, but they will eat an occasional lizard or small snake. They are related to the ant-eater and have a long sticky tongue to grab their prey. They feed primarily at night, but will occasionally feed during cloudy days depending on temperatures. They sleep around 16 hours a day and have multiple holes where they go to rest.

Recent research has confirmed that they also raid the nests of quail and turkey for their eggs. If you are a hunter like myself, then your concern for your yard might take second place if you enjoy the explosion of a quail covey or having a gobbler answer your call from just over a ridge.

Knowing their detrimental effect on the ground bird population might be enough for some to try and reduce the armadillo population on their hunting property, but a word of caution! 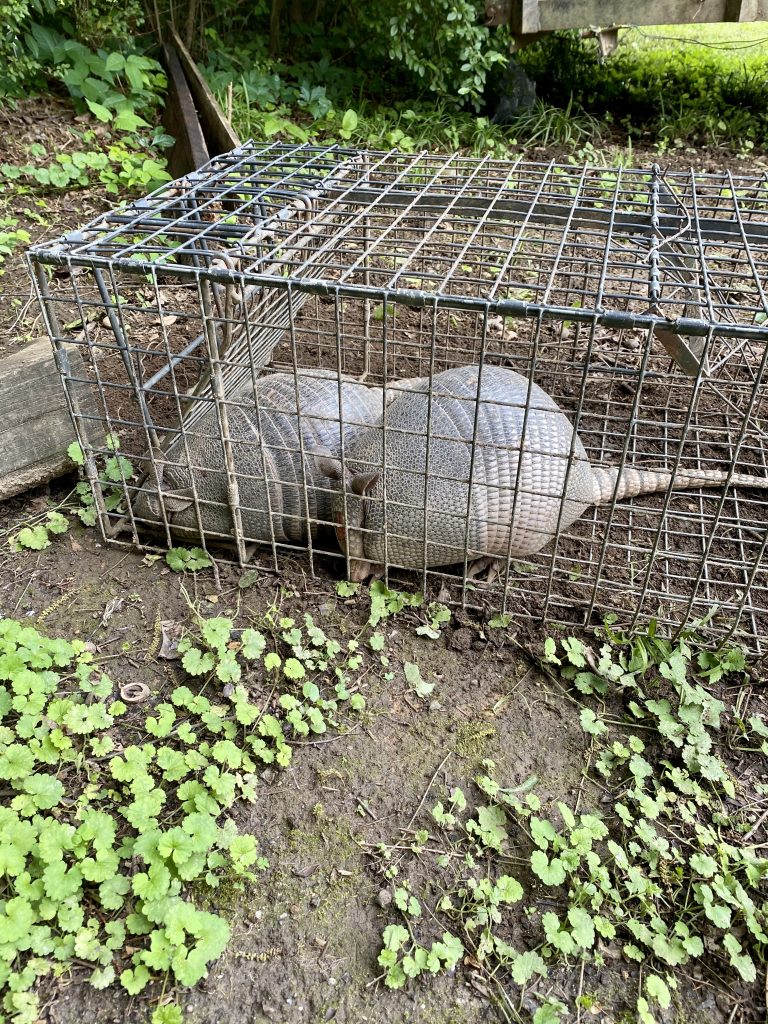 Trap placement is key when it comes to ridding your yard of these hole digging pests.

Scientists have concluded that the early explorers brought leprosy onto the shores of South & Central America with their arrival about five centuries ago. Several researchers have studied the possibility of contracting the bacterium that causes leprosy from contact with an armadillo. Before the visiting explorers, there was no evidence of leprosy, or Hansen’s Disease, in North or South America.

Their low body temperature (90 degrees) might account for the bacterium infecting these animals. Studies have shown that in Brazil and other areas where the armadillo is hunted and consumed regularly, leprosy is present at higher rates than the general population.

Richard Truman of the “National Hansen’s Disease Program” at Louisiana State University has studied and written extensively about leprosy in armadillos and if armadillos carry disease.

“Sick animals will likely be picked off by predators and not survive long enough to develop obvious symptoms. It (the bacteria) cannot survive very long outside of a living cell, a couple of hours on a microscope slide, and maybe two weeks in moist soil,” noted Truman.  “Fortunately, about 95 percent of us—are naturally immune to it. A person’s likelihood of getting the disease, even with close contact, is slim and rests on variables such as his or her genetic makeup and immunologic strength.”

A note of caution: I found reference to three cases in Mississippi that tested positive as early-stage leprosy by one doctor, and close contact with armadillos was the common link. We all know to take precautions when cleaning rabbits, deer, and wild hogs. I would reiterate to make sure and wear gloves and wash up after handling any wildlife.

How to Catch An Armadillo

A study conducted by the University of Georgia tested different scents and armadillo bait to attract them to their traps. They used wire traps with and without bait for their experiment and checked their traps over 1,000 times and only caught 10. The results were that there was no evidence that using different foods or a commercial lure to draw armadillos into a randomly placed trap was effective.

Some trappers insist that wooden traps will outperform wire traps, and it may be true, but I recently caught six out of my wire traps in less than a week.

The key to success in trapping any animal is trap placement. Finding fresh rooted ground and back-tracking to the entrance or exit trail is essential. Locating a natural constriction or moving logs and other objects to create one will increase your capture rate. In a yard, this can mean simply placing boards or portable fencing to form a V-shaped funnel into the trap opening.

There are commercial wooden traps available to trap an armadillo. For an extra $65.00, you can buy a trap that has previously housed a captive animal to deposit its scent into the wood. Other trappers seem to agree that wooden traps that have housed previous catches seem to have a better catch rate than a new unscented one. 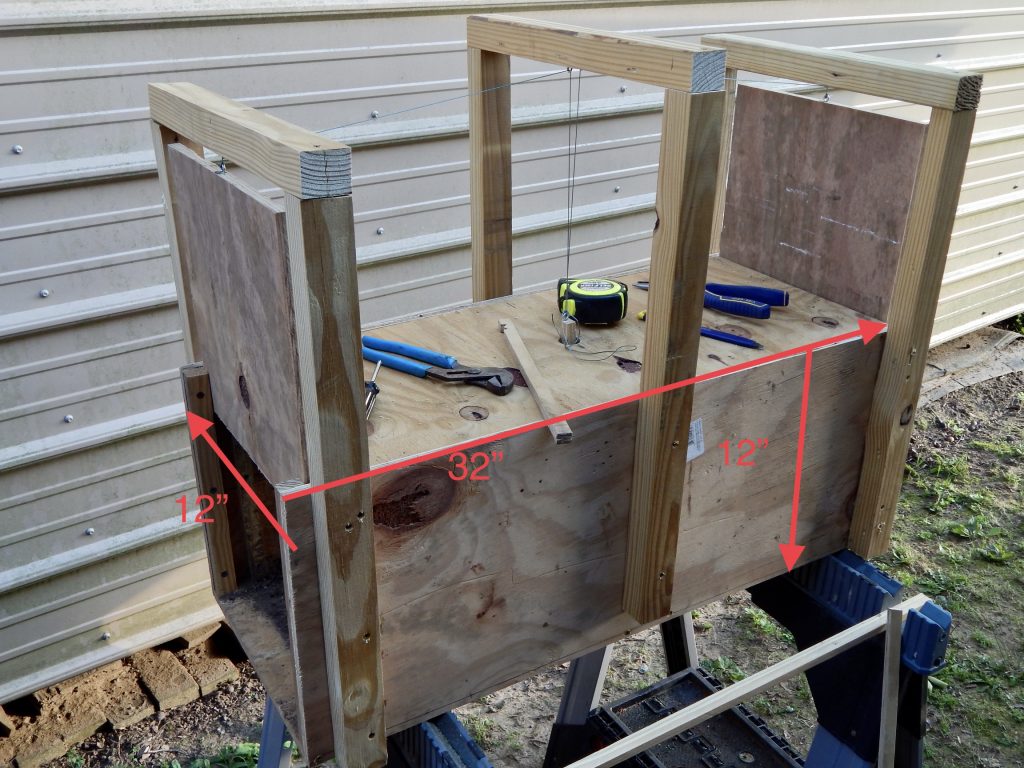 A homemade wooden trap is a perfect DIY project to help rid your yard of the armored pests.

If you have some spare wood lying around, you can make a wooden version in a couple of hours. I suggest making your trap 12″x12″x32″ with sliding doors at each end. They can be scaled up or down to catch a variety of wildlife. It’s relatively easy to remove an armadillo from a wooden box trap.

Stand it on one end and open the top door. Using gloves, reach in and firmly grab its tail and lift it clear of the opening. You may want to consult your local fish and game office for the proper disposal of your catch.

How To Get Rid Of Armadillos – Final Thoughts

Be sure to peep inside your trap carefully if the doors are down upon your arrival. A variety of critters might use the same trail, so listen closely and carefully peer into the small hole on top to see if there might be a black critter with a white streak down its back.