How to Scout for Deer | Great Days Outdoors

How to Scout for Deer

How to Scout for Deer

Summer is passing us by like a jet in the sky, and there’s nothing we can do about it. For deer hunters, the season prep window is closing, and once it’s gone … it’s gone. There’s no getting it back. Because of that, now is the time to scout, prep and make plans for fall and winter. Get your ducks in a row for the early season, pre-rut, rut and late season. Sure, you can’t figure out everything right now. But you can stack the deck in your favor. Here’s how to scout for deer.

How To Scout For Deer – The Rise of Tech

While we still love and use classic methods of scouting, the rise of technology has changed how we do things. Digital resources, mobile apps, trail cameras, cellular models and more have modernized the way hunters find and pattern whitetails. It’s really changing the landscape, so much in fact, that some places are banning the use of not just cellular cameras, but all trail cameras.

Personally, I believe trail cameras are completely ethical and their use shouldn’t be infringed upon. I don’t think these place an unfair advantage, and those who advocate against these are merely bitter. So long as these are legal, keep using them, y’all. 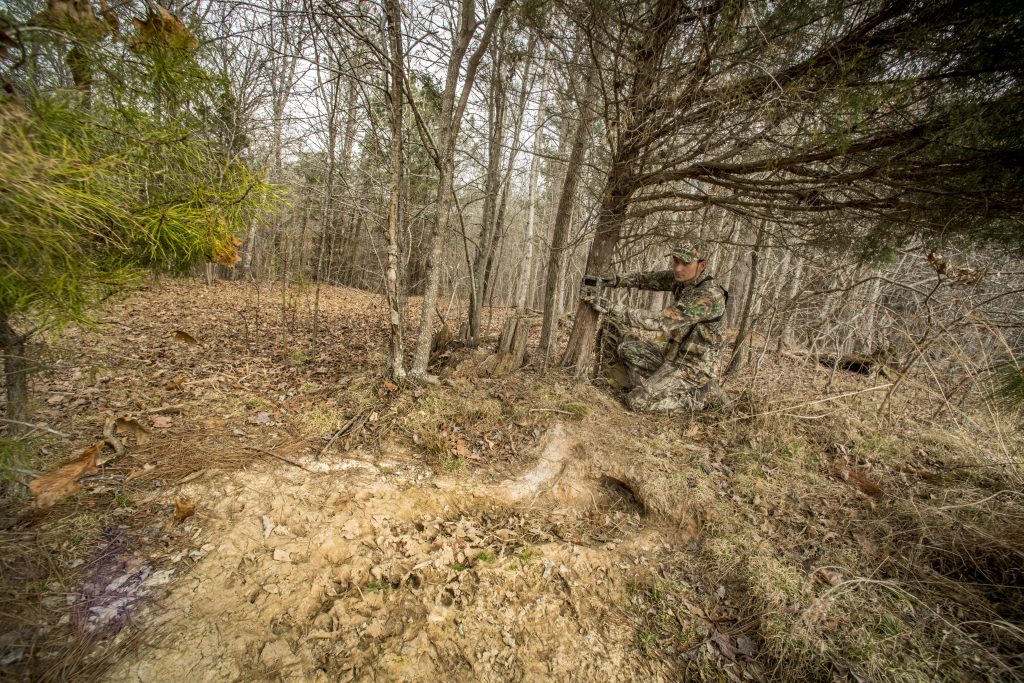 Deploying trail cameras in an effective manner is a surefire way to capture a high percentage of the deer in a given area. (Realtree Media photo)

Other means of technology are at the modern hunter’s fingertips. E-scouting online is another beneficial tool in our arsenal. Studying online maps of properties offers land details. Pouring over hunting forums can relinquish clues. Digital sources offer tips and tactics on how to get the job done. The list goes on. An endless amount of knowledge and resources are at our disposal.

How To Scout For Deer – E-Scouting with Purpose

Speaking of tools, those who choose to e-scout prior to drilling down can do so. For example, using Boone & Crockett, Pope & Young, and Buckmasters records maps help show us where the most top-end bucks come from. These yield clues on where deer herds are doing the best, where the habitat is better suited for deer, where the soil is in the best shape, where hunters are the best at managing whitetails and much more. This information gives you a starting point, and even helps select a region to focus on.

State agencies, and other public-land managers offer maps, and even interactive tools, that show open hunting access. Sometimes, these tools even illustrate detailed aspects of such properties, and help hunters understand the dynamics of each property. This too can help narrow the search to specific properties, and even gives you clues what the place looks like prior to seeing it in person.

The same holds true for Google Earth, as well as other online mapping services. You’re able to get a feel for what properties look like, their features, and where potential hotspots might be located. Get an idea of what the vegetation looks like before ever arriving at the property.

How To Scout For Deer – Becoming an App Master

In today’s age, online scouting is almost old-school itself, especially considering the advancements of hunting apps, such as HuntStand. It’s a free app, but those who choose to level up to HuntStand Pro unlock powerful tools to use at their disposal. As an ambassador for the brand, I’ve been able to test this resource extensively, and the performance surpasses the hype.

For starters, it offers numerous map layers. Those who want to pick apart a property from an aerial view will love the hybrid, satellite, and satellite vivid map layers. This helps reveal what the foliage looks like on the property, and helps distinguish between hardwoods and conifers. It even reveals potential feeding destinations, such as ag fields and food plots. That’s powerful insight.

Those aren’t the only options, though. Hunters wanting to scout in topography mode have additional layers at their disposal. The contour, hybrid, terrain and topo layers are perfect for this. These oftentimes reveal quality hunting spots, such as benches, pinch-points, saddles, and much more. 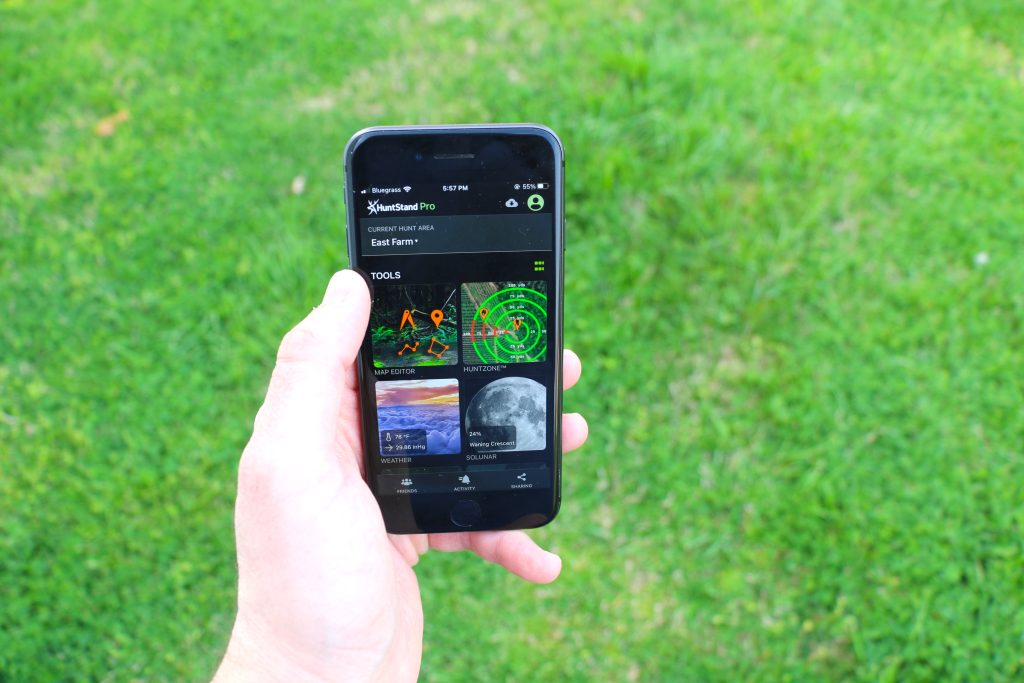 Hunters even have water-based map layers at their fingertips. This is especially important where water is more limited. Use the contour, outdoors and topo layers to find some high-quality H2O.

Finally, using the ever-popular 3D map layer is the king of all map layers. It reveals terrain and topography all at once and greatly surpasses the value offered by aerial-topo hybrid options. This layer is incredibly adept at showing you what a property looks like — from a distance — as if you’re walking around on it. It’s no replacement for seeing land in person, but it’s the next best thing.

How To Scout For Deer – Deploying Trail Cameras

Once you’ve selected a region, then specific properties, and even e-scouted these tracts of land with online and app services, it’s time to deploy trail cameras. Personally, I prefer to position my cameras along terrain, and topography-based hotspots, or places that offer hunting and trail-camera-related advantages. Generally, these are linked to bedding areas, feeding destinations, water sources, and staging areas.

That said, deploy your armada of cameras to these locations. Let them soak for a period of time, effectively capturing images of deer in the area. Then, move in to check them. Leave the cams that produced, and relocate those that didn’t.

One option is to move unproductive cameras closer to those that produced. This can help home in on a buck’s core area. Just be careful not to push too deep toward bedding, as this can pressure deer and cause them to change their behavior.

Another option is to move cameras to entirely new areas where cameras aren’t already present. In my opinion, if you find a target buck you’ll for sure go after, maybe go with the former option. If you’re still on the fence about the deer your scouting efforts have dug up, perhaps go with the latter option.

How To Scout For Deer – Using Past Intel

It’s important that hunters don’t just rely solely on current data. Sure, the most recent intel is the most important information. That said, past info from previous seasons can be relevant, especially if the information is tied to specific bucks still on the landscape.

For example, for each target buck, analyze trail camera photos from past seasons using a trail camera viewer. Doing so can help reveal clues for the coming fall and winter. This is even truer for deer that tend to repeat their patterns each year.

If you have seen the deer from the stand, add these encounters to the mix. For the sake of past intel, these are even more important than trail camera photos, because in-person sightings provide greater context to this situation. These helped show where the deer came from, where it was going to, and what all it was doing.

How To Scout For Deer – Old-School Finishers

While new-age scouting technologies are important, old-school deer scouting tips are not to be ignored. These tactics are still useful, and they certainly have their place in the scouting mix. Anyone who refuses to use these is significantly hindering themselves.

First, for people who are new to a property, or who haven’t seen it in a long time, certainly put boots on the ground and see what the area has to offer. (During the post-season, I do this on every property that I hunt on.) Move in and verify expectations and findings from your e-scouting and app efforts. Seeing it in the flesh will give much more context to the area. Plus, things could have changed since the maps and apps were last updated. Plus, despite the advancements of technologies, it still doesn’t compare to being there. 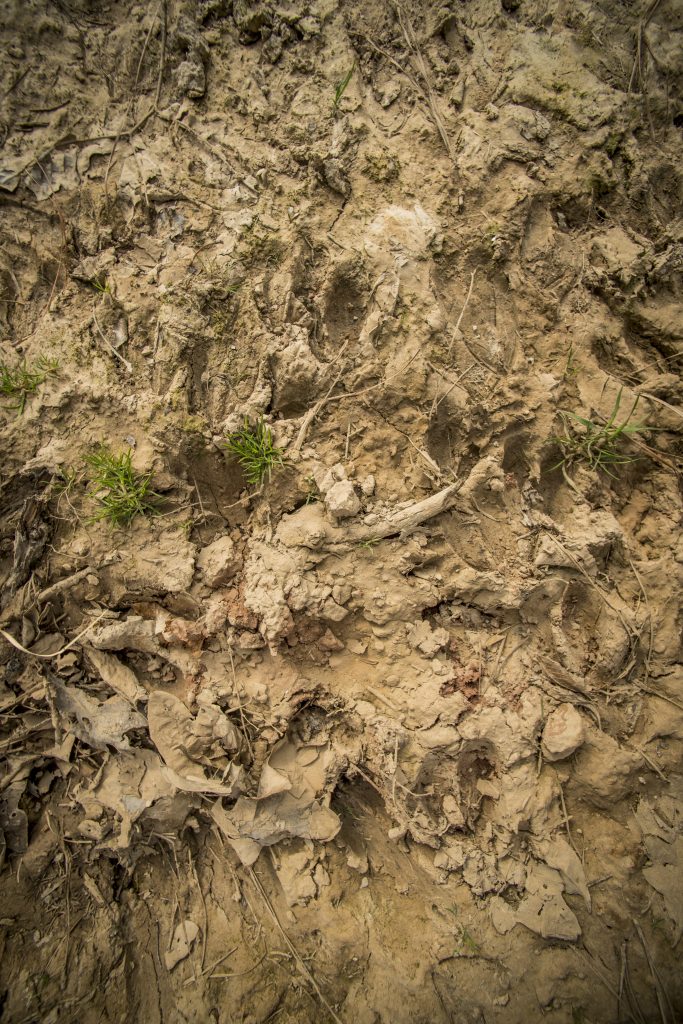 Despite the rise of technology, old-school methods, such as boots-on-the-ground scouting, certainly still have their place in deer hunting. These are no less important. (Realtree Media photo)

Glassing from afar is another tactic to use, especially for those who hunt in areas that allow it. Sitting back and watching major food sources is a great way to see what deer are in the area, and what they are doing. Trail cameras do this, but don’t paint the entire picture. Seeing deer in person does, though.

In a nutshell, technology gets you close. It certainly saves time, and even helps eliminate obvious bad spots. But old-school scouting methods help close the gap from “close” to “dead deer.” Use a healthy combination of new and old scouting tactics to fill tags this fall.

How To Scout For Deer – Classic Hotspots

No matter the type of scouting you’re conducting, it’s important to recognize a potential hotspot when you see it. Deer are creatures of habit, and in general terms, they often behave similarly. As such, keep an eye out for the following terrain and topographical features.

As edge animals, deer love edge habitat. Most places where two types of terrain meet, such as hardwoods meeting conifers, is an edge. Deer gravitate to these areas.

Leeward ridges are also important. These are best described as the downwind side of a ridge line. Here, the wind creates a tunneling effect, and offers winding advantages for deer.

Benches are good, too. These are long, flat shelves along hillsides and ridgelines. Deer like to bed on these, and travel along them, too.

Ridge endings are also important. These are common bedding areas for whitetails. This is especially true for mature deer.

Outcroppings and overhangs are common hotspots, too. As long as deer have appropriate escape routes, deer sometimes bed underneath these. This makes them important areas to keep an eye on.

Don’t sleep on saddles when you are thinking about how to find deer. These are gateways within long ridges, and deer travel through them so they don’t have to hike up and over the higher elevations. These are solid stand locations.

Water seeps are big in areas where water is limited. It’s not uncommon to find these seeps at mid-elevation points, whereas lakes, rivers, creeks and streams are at lower elevations. Because of this, seeps are commonly used during daylight hours, while other water sources are not.

Waterway oxbows are important too. This is where a river or creek creates a U shape around land. The land forms a peninsula shape. Deer like to bed on these, especially when the wind is blowing from land toward the oxbow. If they smell danger, they slip out the back door and head across the water, which serves as a barrier to predators.

Inside field corners are other places to consider. Deer like to emerge into the open from such areas. Keep them in mind during scouting efforts.

Small woodlots and thickets are good, too. If they’re isolated and overlooked, it can be even better. When deer go unnoticed, they get old, and sometimes, even complacent. Those are the deer I like to hunt.

Lastly, look for tree and plant species deer prefer. Hardwoods that drop quality mast, such as acorns, chestnuts, etc., are good. Other trees that yield soft mast, such as apples, pears, persimmons, plums, etc., are good, too. And don’t forget evergreens, such as cedars and pines. These offer thermal cover deer rely on in winter.