How To Shuck Oysters At Home | Great Days Outdoors

How To Shuck Oysters At Home

How To Shuck Oysters At Home

If you don’t know how to shuck oysters, the first time can be a bit intimidating. There’s no doubt a learning curve, but if you acquire the right tools and learn the correct techniques, you’ll be shucking like an expert in no time.

Of course, to get the most out of your experience, you want to start off with the best-tasting, high-quality oysters you can find. The fresher the better and the location where the oysters were farmed or harvested makes a difference in taste as well.

Anthony Ricciardone, co-founder of Admiral Shellfish Company, an aquaculture farm that produces delicious, fresh raw oysters for the premium half-shell market out of Gulf Shores, Alabama, says location has a big impact on the oyster’s flavor.

He explains that different locations have different algae, food sources, salinity and wave action, and all of these factors and more affect an oyster’s flavor.

“Oysters can vary in taste even when they come from the same region. In Mobile Bay, you can have 10 different farms with 10 different salinities due to how far a farm is from the mouth of the bay and what rivers surround it. Admiral Shellfish oysters are raised in the perfect location.

Not being near a major river system or marsh full of tannins, but still having the perfect amount of plankton and algae for oyster foods, lead to a clean briny creamy oyster flavor. Our frequent handling makes a consistent cupped shell that plates well and a hinge is there for shucking ease,” Ricciardone said.

Brody Olive, head chef of Voyagers at Perdido Beach Resort, says he and his team often shuck more than 1,000 oysters a week. With that much practice, they‘ve got the system and equipment down to a science. 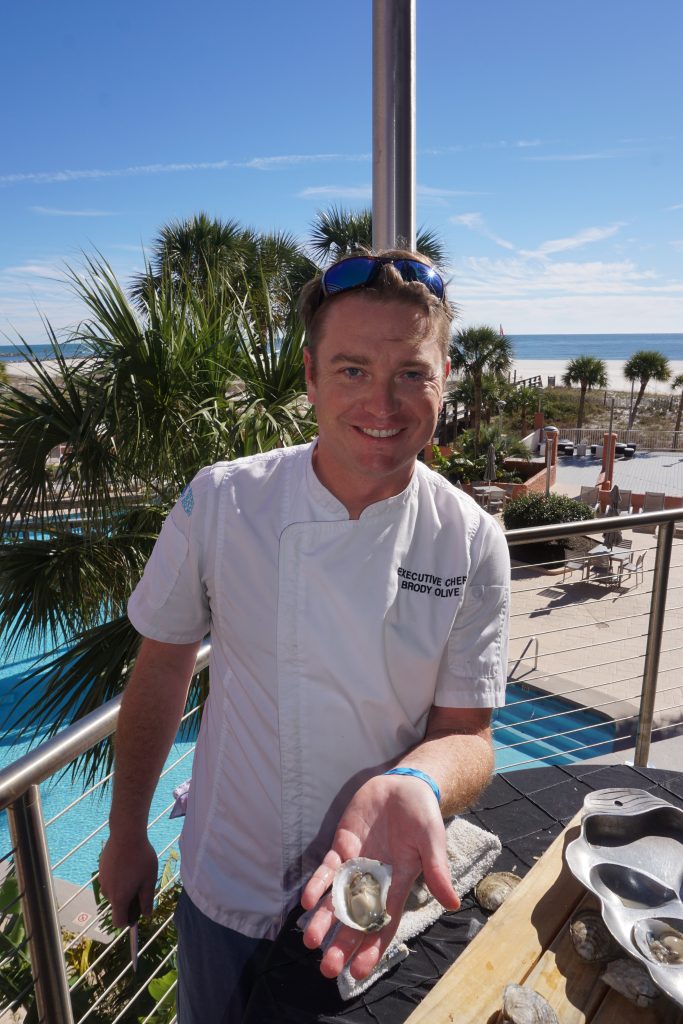 Voyagers Executive Chef Brody Olive says he and his team shuck more than 1000 oysters a week. (Image by Brody Olive/Voyagers)

When it comes to knives, Olive says they use a multitude of different knives and that the ideal knife comes down to personal preference.

“I like a really sharp straight knife with a nice, fat handle that’s easy to grip. I need something I can twist like a motorcycle throttle. If the handle is super thin, I can’t get the torque I need. My father likes to use a curve-bladed knife for the torque and angle. I often use a Boston Bagger, which is a really sharp knife that will easily penetrate the hinge or lip of the oyster,” Olive said.

Of course, the knife you choose is also going to depend on the type of oysters you’re shucking. If you’re shucking Alabama farmed oysters, you’ll need a knife that works well for their smaller dainty shells than if you’re shucking those enormous old-school Apalachicola oysters, which also tend to have a bigger gap and can handle a duller more rounded knife.

It’s a good idea to invest in a shucking knife and not rely on the standard kitchen knife, because oyster knives tend to have thicker handles and can take the pressure required to pry apart live oysters. 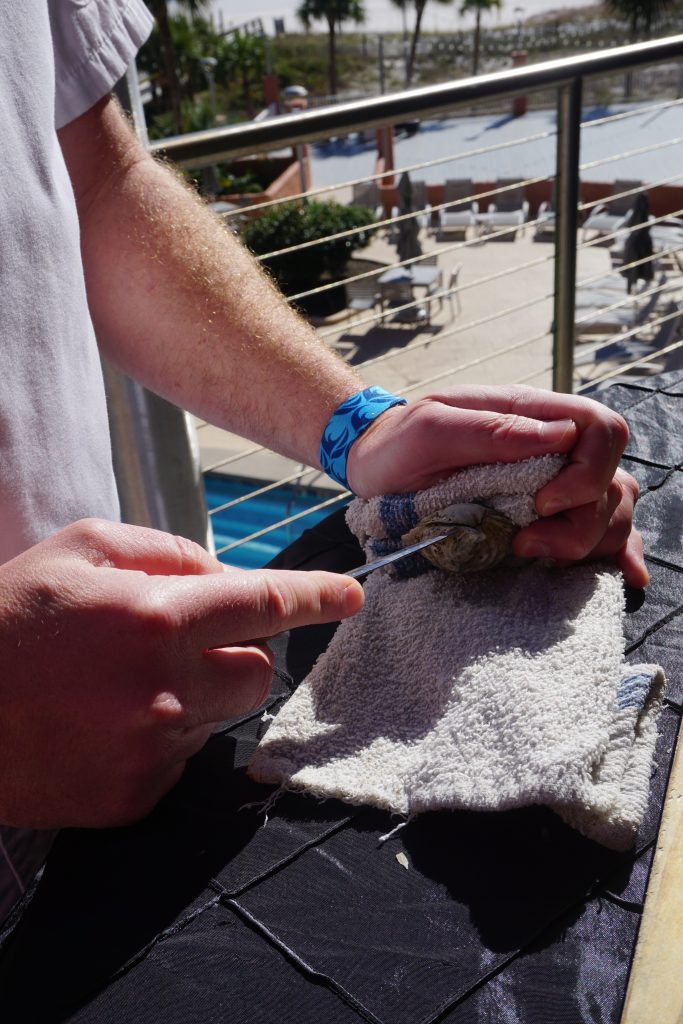 A good oyster-shucking knife is a must. (Image provided by Brody Olive/ Voyagers)

“Amazon sells a lot of inexpensive shucking knives. You can order and try several until you figure out what you like,” Olive said.

Lindsay Allday, oyster sommelier at Sidecar Patio & Oyster Bar, in New Orleans, has shucked more oysters than she can count. It’s now like second nature to her, but for newbies, she says it can take some getting used to.

When it comes to knives, her choice depends on the oyster.

“They all have different shapes and angles. Some are narrower and some are wider. For those big, wild oysters, you’re gonna want to use a bigger knife. For the smaller farm-raised oysters, you’ll need a smaller knife. If you use a big knife on a little oyster, you may end up butchering it,” Allday said.

She says her two go-to knives are a blue-handled Toadfish knife and a Duxbury shucker made by R. Murphy.

When it comes to safety, Allday recommends wearing a chainmail glove.

“I shuck so many oysters a week that it’s just a game of statistics before I stab myself in the hand. The oyster’s sharp shell can also slice your hand open. Why risk cutting a nerve or tendon or getting an infection and having to be on antibiotics for a week?” she asked.

For those who don’t want to wear chainmail gloves, she said there are cut-proof gloves available. Although they won’t stop a knife from going all the way through, the gloves will offer some protection.

Both Olive and Allday recommend securing the oyster with a folded towel to protect your hand and keep the oyster in place.

Examine and Clean Your Oysters

Before getting started, Allday says examine your oysters and make sure they all look nice and healthy.

“Don’t shuck one that’s open or smells bad,” she said. “If you will be shucking wild oysters, you’ll need to wash them well. But if you’ll be shucking cultivated oysters, like those from Admiral Shellfish, you can skip that step because they come power washed and clean.” 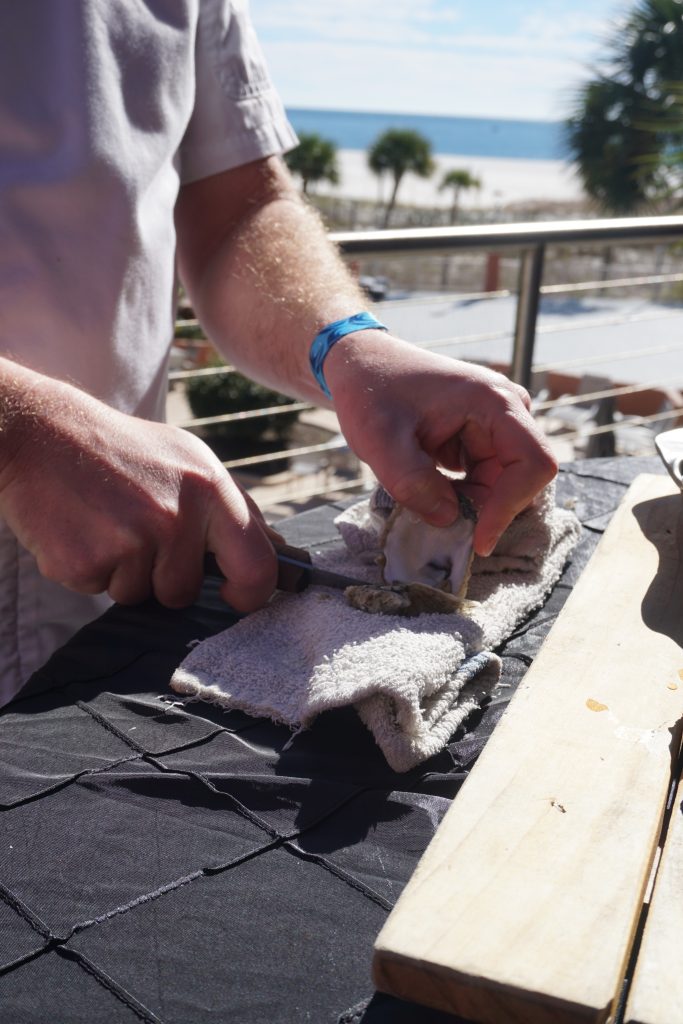 Stick your knife in just off either side of the hinge and twist or shimmy it until you feel the oyster unlock. (Image by Brody Olive/Voyagers)

“Admiral does a great job providing a very clean product, but if you buy wild oysters, you’ve got to make sure you get the excess mud and debris off, so it doesn’t get in the shell when you shuck it,” he said.

Olive also recommends shucking oysters outside to help with the mess.

“Slide a couple of chairs around a cooler and use it as your platform because you can spray it down easily when you’re done.  You don’t want to drip oyster juice all over mama’s kitchen,” Olive noted.

When it comes to shucking the oyster, Allday says there are many ways you can do it, but she favors one particular method.

“Most of us shucking Gulf oysters will go in from the hinge. But if you’re shucking East Coast oysters, you may have to shuck through the bill. They’re a bit more fragile because of the different nutrients they receive,” she said.

When preparing to shuck an oyster she says she folds a towel, sticks the oyster on top of it and then folds it again, so the oyster is within the fold.

“While holding the oyster within the towel, stick your knife in just off the hinge on either side. Stick the knife tip in far enough so that if you let go of the oyster, it’s going to stay there. I call it the Cajun lollipop,” Allday said. 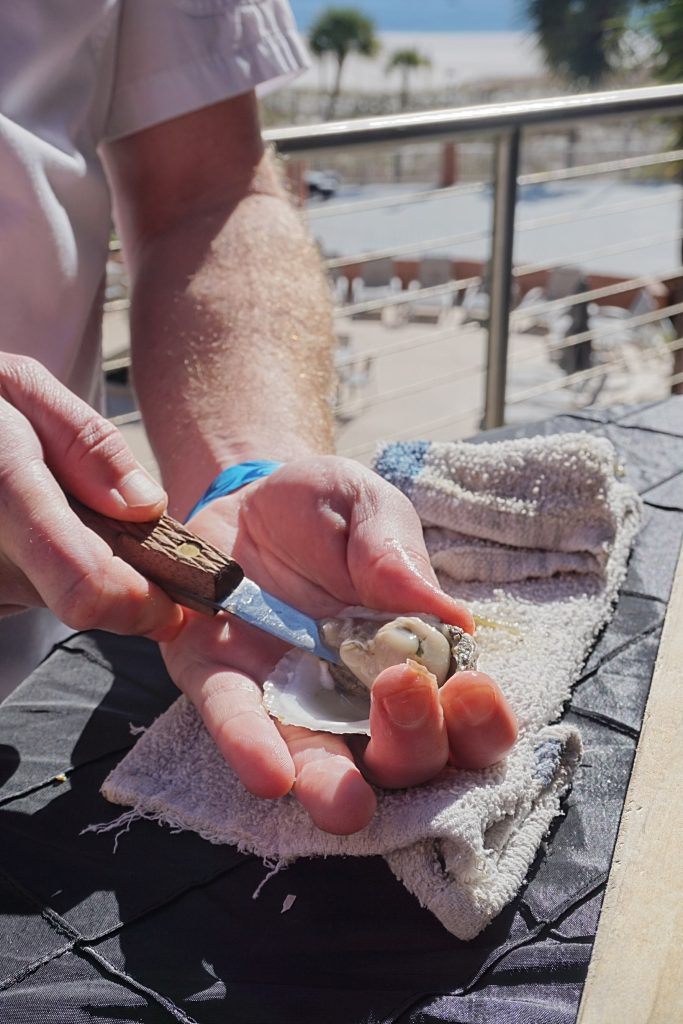 Scrape the knife across the inside of the shell to detach the muscle. (Image by Brody Olive/Voyagers)

She says next, you’ll wiggle, twist or shimmy the knife until you feel the oyster unlock.

Next, she says you’ll shimmy the knife down. If the hinge is facing you, you’ll shimmy it down the right side toward the bill or the front where the abductor muscle connects the oyster to the top and bottom shell. At a 45-degree angle, scrape the knife across the inside top of the shell to detach the muscle Allay explained.

“It’s more of a scrape than a slice. You want to get as much meat off as you can,” Allday said.

You’ll do the same thing on the bottom. Coming from the right side of the bill, swipe backward to detach the oyster from bottom.

Allday says make sure you hold the oyster upright and keep it level so as to not spill the brine, because that is where most of the flavor is held.

“If you do spill some of the brine, don’t worry too much. A shucked oyster will produce more brine because it pushes out what it was filtering. Of course, you don’t want to waste any of it because the more brine inside the oyster, the better the flavor,” Allday said.

“The goal is to not cut the oyster or stab any of it with your knife. You also don’t want to get bits of shell or grit in there. After I cut it open, I take my pinky and clean out the shell to remove any dirt or debris that may have gotten in there. Once you make sure it’s nice and clean, it’s ready for eating,” she concluded.

Olive says if you follow these simple tips, you’ll be shucking like a pro in no time.

“Just remember to take your time. It’s not a race. Speed comes with repetition. It’s about technique and safety. If you’re cognizant and paying attention, you’ll do just fine. There’s no reason to be intimidated,” he explained.  “Once you get a good rhythm, it’ll just flow. Each oyster will only take two or three motions to shuck. Over time it becomes muscle memory and you’ll kind of just Zen out as you’re doing it.”