What Do Oysters Taste Like and What Creates Their Flavor? | Great Days Outdoors

What Do Oysters Taste Like and What Creates Their Flavor?

Known for their salty, crisp, fresh-ocean flavor, Gulf Coast oysters are a favorite cuisine among locals and the thousands of tourists who visit the region every year. What is it about Gulf Coast oysters that make them such a desirable table fare? In addition to their appealing flavor, oysters are low in calories, high in protein and loaded with nutrients, making them a supremely healthy choice. They’re also fun to share with good friends and a bottle of wine. But what do oysters taste like?

Like wine, oysters take on the flavor of their environment. In fact, fewer foods reflect the taste of origin better than raw oysters. With wine, that sense of place through flavor is called “terroir.” With oysters, it’s called “merroir,” which incorporates “mer,” the French word for sea.

Eddie Butterfield, sales manager for International Wines and Craft Beer, explains how the same species of oyster can have different flavors depending on the area of origin.

“For example, you could have three Americans — someone born and raised in Seattle, another from New Orleans and another person from Boston. They’re all humans who speak the same language, but they have different dialects. Their dialects are a reflection of that sense of place. In the same way, oysters are a reflection of their environment, a sense of time and the weather conditions at that moment of harvest,” Butterfield explained. 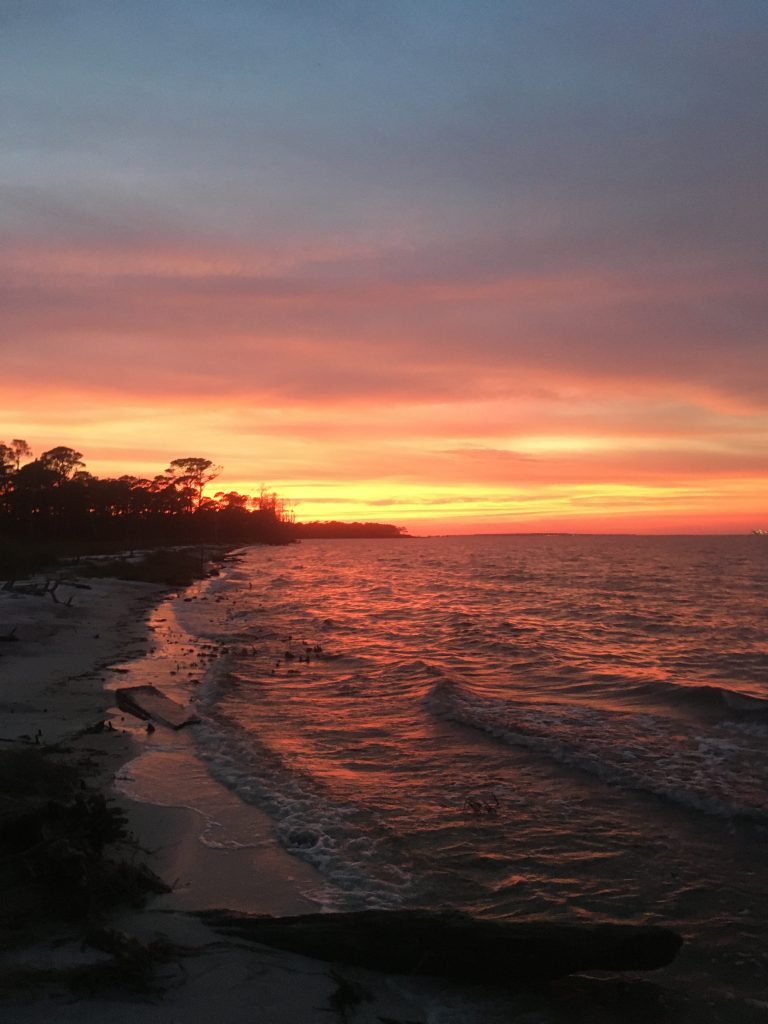 Oysters taste like their place of origin, which is called “merroir”. Image by Admiral Shellfish

So what do raw oysters taste like? Depending on the region and conditions, an oyster’s flavor profile can have a cucumber, citrus, melon, copper, smokey, sweet, briny, mild, crisp, rich or creamy taste.

Exceptional filter-feeders, oysters reflect their environment because they can pull up to 50 gallons of water a day through their gills to capture nutrients. They take on characteristics, such as the salinity, temperature and food sources of the waters they live in. That’s why oysters from different growing regions, even from one bay to the next, can have distinct characteristics and tastes.

Butterfield says the farm-raised oysters showcase the fresh ocean flavor and the fauna and flora in the Gulf’s warm waters but in a smaller, more artisanal format than the bigger, wild Gulf Coast oysters.

“They have a nice, clean creamy ocean flavor that pairs well with a white wine, such as Muscadet, as well as champagnes and bubbles,” he said.

What goes good with oysters? Butterfield believes that not only are oysters a perfect pairing for wine, but they’re also essentially the perfect food.

“You know, some people say oysters are one of the few foods you could solely live off of because they are packed full of healthy protein and nutrients,” he said.

Oysters are loaded with omega 3’s, which are critical fats, as well as vitamins D, B1, B12, B3, iron, protein and niacin. They also contain selenium, magnesium, manganese, copper, and phosphorus, which are essential for health and wellness.

Finding the Perfect Spot for the Best Flavor

Growing farm-raised oysters that boast the size, taste and consistency desired by both chefs and consumers is no easy task as Anthony Ricciardone and Chris Head, co-founders of Admiral Shellfish Company, in Gulf Shores, Alabama, can attest.

“When it comes to a farm-raised oyster’s flavor, shape and savory quality, nothing is an accident,” Ricciardone said. “The site you pick to farm your oysters determines all of these elements.” 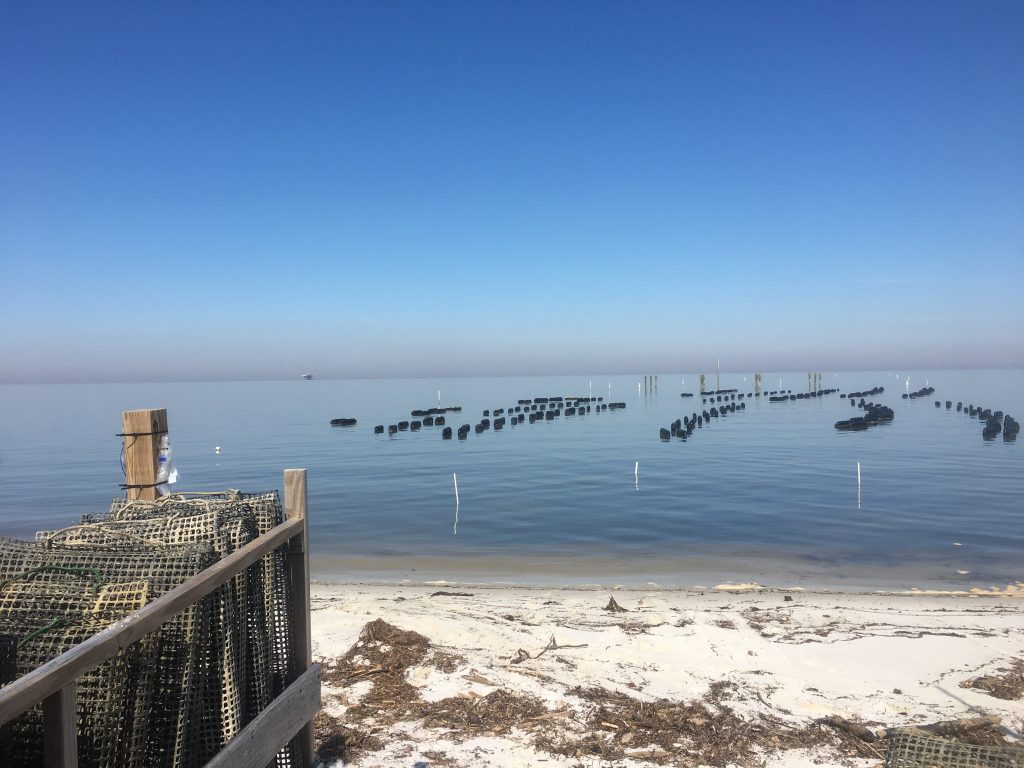 The key to producing delicious oysters is finding the perfect spot for farming. Image by Admiral Shellfish

He said they learned just how important location is to the quality and taste of the oyster with their first attempt at farming oysters several years ago.

“I tried to establish a farm higher up in the bay, 13 miles north of where we are now,” he said. “There was more silt and fresh water coming down the natural river channels. That fresh water, combined with the mud and silt, created a bad flavor profile for the oysters. Freshwater flooding caused die offs and then Hurricane Sally in Sept. 2020, caused us to lose 95% of our crop.”

While struggling with the original farm site, Ricciardone says he’d looked all over the bay for a better location. In his search for the area with the best salinity, substrate, location and conditions, he stumbled upon an ideal piece of property. During his own search, Head had also identified that piece of property as an ideal location for an oyster farm.

Head, who is also an environmental scientist, said that he had pinpointed that same couple hundred feet of beach because it was sandy, shallow and had a good tide.

“It was a pristine, undeveloped site. I knew it’d make an awesome location for growing oysters,” he noted.

Head and Ricciardone agreed to partner on the farm at that ideal site, which is located on a remote stretch of beach near Fort Morgan and benefits from clean, salty tides that flush in directly from the Gulf to the shallow and sandy banks. The conditions promote healthy year-round oyster growth and provide consistent salinity that nurture an impressive crop of oysters.

Thanks to these perfect conditions, Admiral Shellfish’s oysters are easy to shuck and boast a deep cup, beautiful shell, plump meat and a clean salty liquor with a savory seafood finish.

Joe Ingraham, farm manager for Admiral Shellfish, says what many people don’t realize is that even though East Coast oysters can vary greatly in size, taste and appearance, they’re all the same species of oyster, unlike Pacific Coast oysters which include three distinct species. 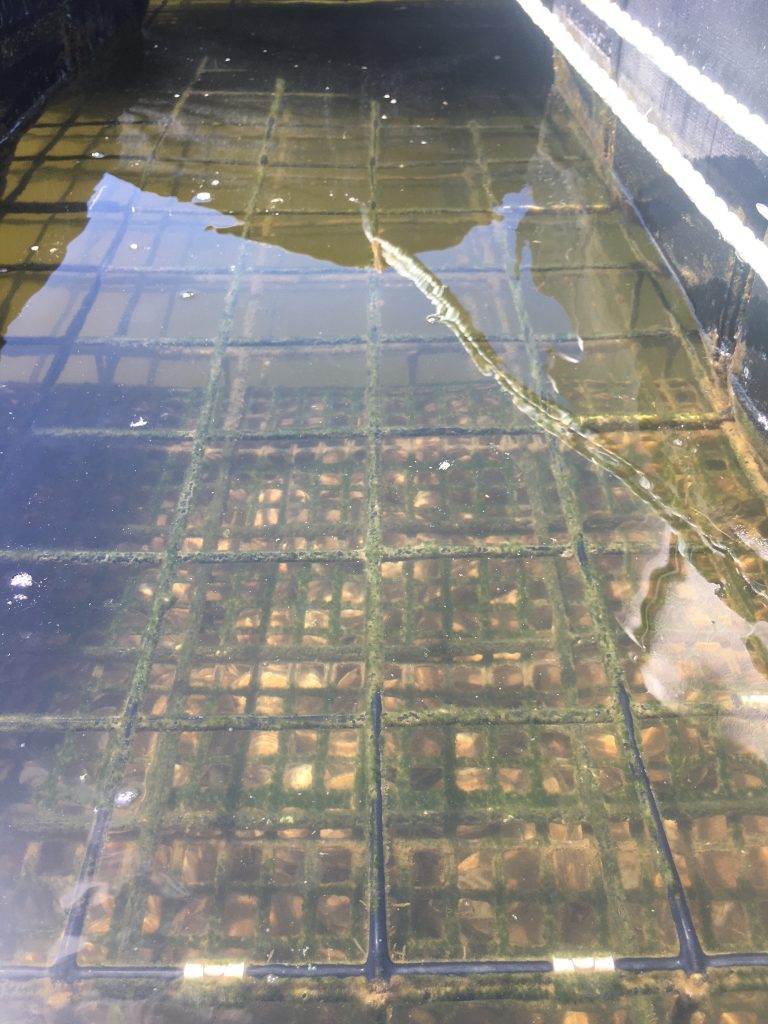 “All the oysters from Texas to Maine are all the same species called Crassostrea Virginica,” Ingraham said. “But if you put one from New England next to one from Texas and then next to a farm-raised oyster, they’re each going to look different to the layperson. There’s so much variety throughout the environment in the region that the oysters are going to look and taste very different from area to area.”

When it comes to the difference in taste between wild and farm-raised raw oysters, both types are recognized for being delicious.

A lot of work goes into giving the Admiral Shellfish oysters that perfect size, deep cup and crisp, savory flavor.

“We want the oysters to have a cup with a flat edge on top to shuck off,” Ingraham said. “Wild oysters don’t grow like that naturally. As they grow, we chip and break off that lip on a weekly basis to help create that deep cup and meatier oyster. A wild oyster will grow much more elongated with a shallower cup because it doesn’t undergo that chipping process.” 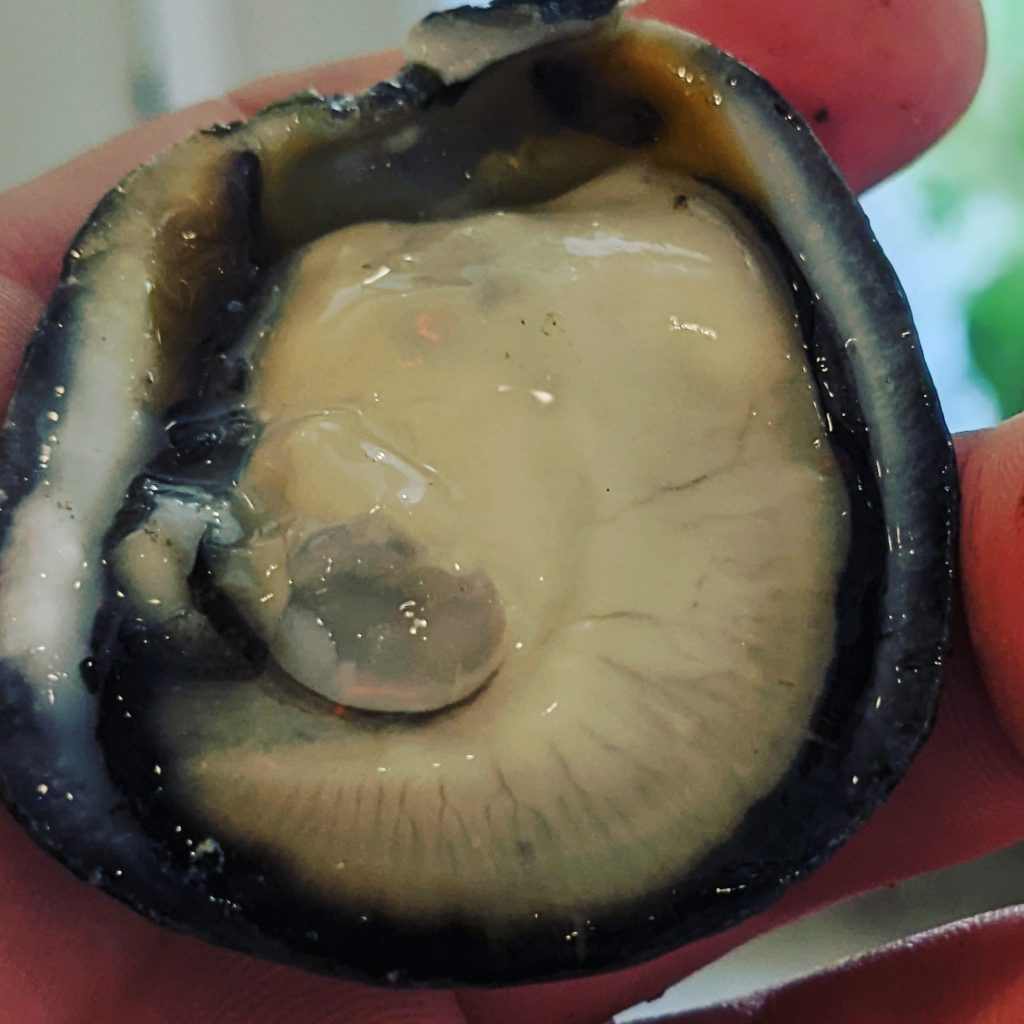 In this close up of an Admiral Shellfish oyster, you can appreciate its meatiness. Image by Lindsay Allday, oyster sommelier at Sidecar Patio & Oyster Bar

Ingraham says that consistent size and deep cups are what chefs love about Admiral Shellfish oysters.

“They want their oysters to measure between 2 ½ and 3 inches for consistency,” he said. “If they go to serve six oysters, they don’t want three oysters that measure 2 ½ inches and a few oysters over three inches. They want a uniform look for their dishes. A deep cup to hold that natural liquor is important as well. If you go to shuck it and the meat slides right out because it’s too shallow, that’s no good.”

Ingraham says if a restaurant is carrying six different types of raw oysters, it wants the average person to be able to tell the difference in flavor between the six oysters.

“Some will have a cucumber or melon-type taste. Some are less salty, while others have more brine. You’ll get different opinions with each chef you speak to. Generally, most people want a brinier oyster. If an oyster has been sitting in water with a salinity level that’s below 10 parts per thousand (ppt), it will taste bland. Its texture will also be softer. Oysters in water with higher salinity will be firmer.”

Lindsay Allday, oyster sommelier with Sidecar Patio & Oyster Bar in New Orleans, runs the oyster bar and does the ordering and menu writing. She says her oyster menu, which features 20 different types of oysters at any given time, reads like a wine menu.

“I have 20 different types of oysters on the menu at all times from all over the country,” she said. “Our menu is like a flavor rollercoaster.” 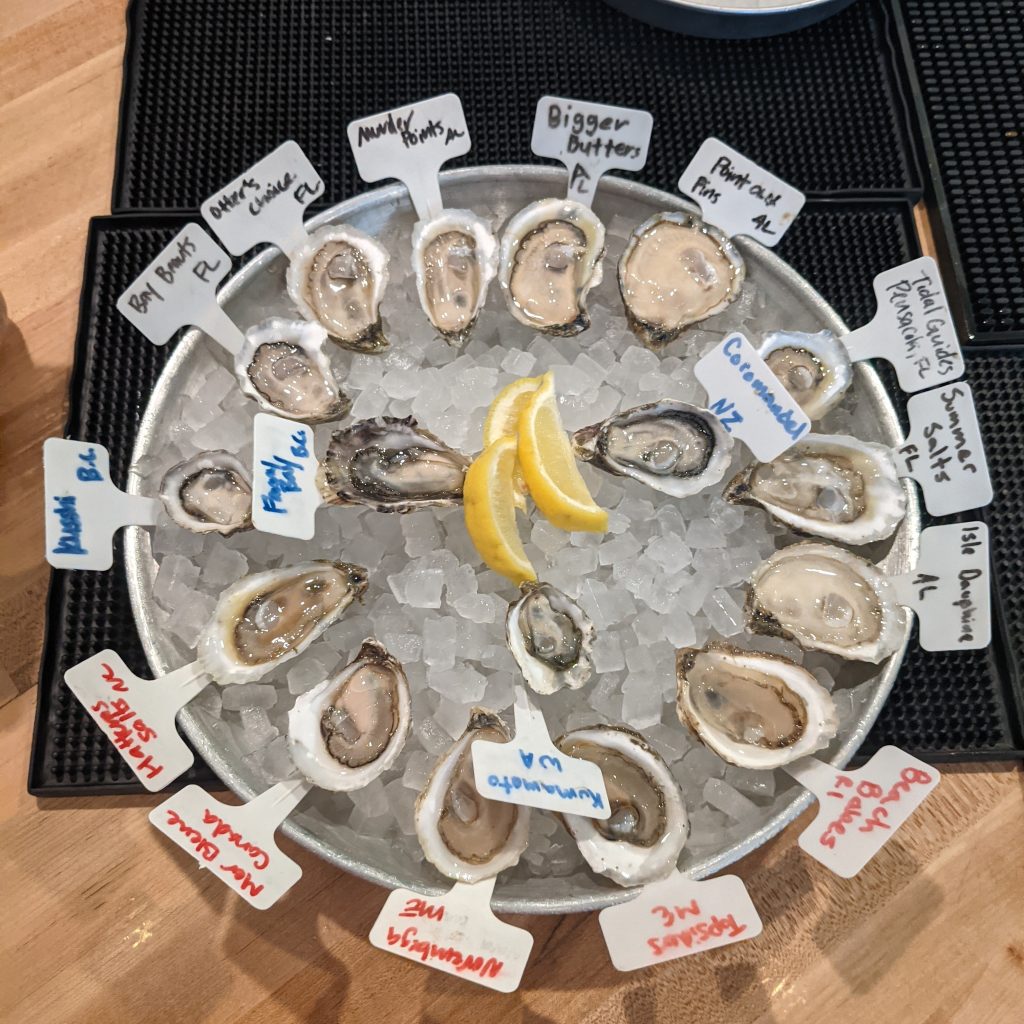 She says most of her customers want a small raw oyster that is clean, crisp and meaty and that’s exactly what she gets with Admiral Shellfish oysters.

“Admiral’s oysters are beautiful and immaculately clean,” Allday said. “The meat is almost bigger than the shell. I call them ‘chunky boys.’ The oysters are about the size of a quarter, which is what people want. And the flavor is excellent thanks to their ideal farm location near Fort Morgan, which is out in the Gulf where they get that fresher, saltier water.”

When asked what it is about raw oysters that people love, she says if they’re like her, it’s the taste of the ocean.

“When I taste an oyster, I can truly taste where it comes from, and I love that because I’m a beach person. I also truly appreciate the oyster for the amazing creature that it is. They help with pollution by filtering the water. And, oysters not only feed us, but their reefs feed numerous aquatic species. Their beds literally create a whole ecosystem, which I think is beautiful.”