A lot of anglers from outside Alabama have never heard of Neely Henry Lake Reservoir, but it’s a highly-productive lake that doesn’t get nearly the pressure of better-known waters like nearby Guntersville, and that can be fished when the bigger lakes around the state are blown out with strong winds and cold fronts.

Neely Henry is an 11,000-acre reservoir on the Coosa River, near the towns of Gadsden and Ohatchee. It extends over 77 miles from the Neely Henry dam upstream to Weiss dam.

The upper portion looks much like the Coosa River, narrow and winding, but below Gadsden the lake fans out to plenty of fishy bays and open water. It’s been a magnet for bass and crappie anglers and boaters for decades, and fans would like to keep it that way.

When it comes to bass, local anglers like guide Lee Pitts, who won one of the highly-competitive Alabama Bass Trail (ABT) tournaments here in 2019, says there are basically two lakes attached to each other.

The upper stretches are mostly spotted bass county where anglers who understand current fishing tactics and finesse baits load up on some of the fattest spots in Alabama. The lower stretch, below Gadsden, fishes more like a lake, with lots of winding side bays, grassy shores and stump flats where largemouths thrive.

When the water flows, the spots bite, and it’s possible to know when those flows are coming thanks to the generation schedule provided by Alabama Power; https://apcshorelines.com/our-lakes/neely-henry. The company has also put many brush piles into the lake to act as fish habitat.

Head for gravel bars, points, bends and underwater obstructions when the flow is on and probe with crankbaits, swim jigs and soft plastics on shaky-head jigs and you’ll connect. When the flow stops, you’re better off heading downriver to fish for largemouths, which are not so current-conscious. 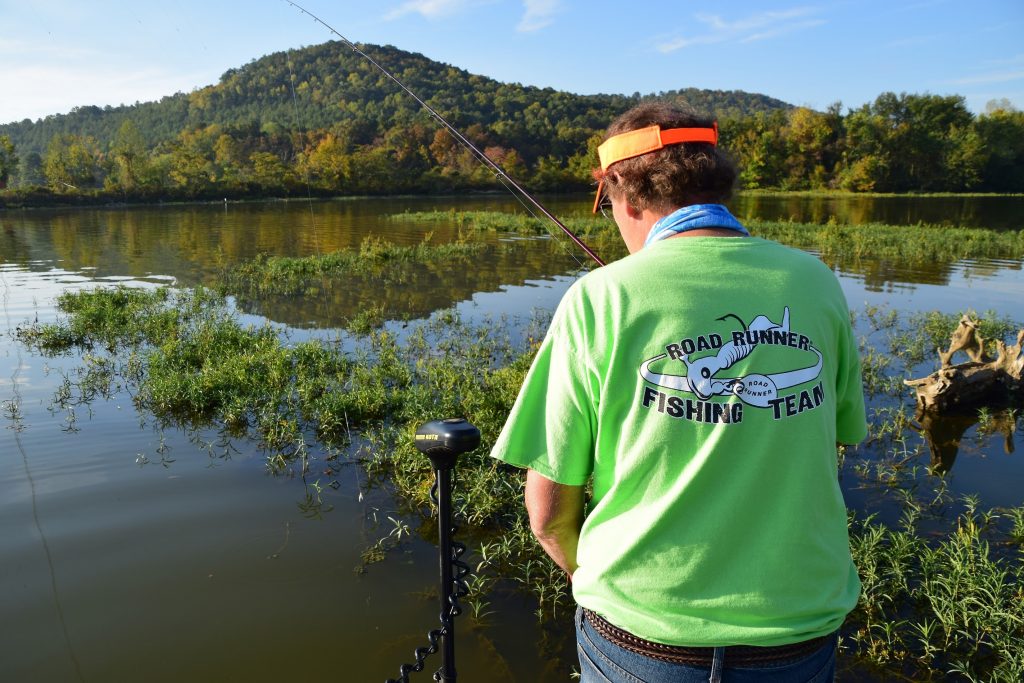 Pitts notes, though, that the largies do like flowing water, especially when it comes in from a feeder creek or drain.

“The mouths of those creeks can be great pretty much anytime there’s enough flow to wash out minnows and crawfish,” Pitts said. “Imitate those baits and you’ll connect.”

Otherwise, find largemouths in the usual locations—hit the shorelines with scattered grass with spinnerbaits and weedless frogs, the stumps and laydowns with jigs, soft plastics and squarebills to connect. Pitts won his ABT event here flipping 3/8 ounce jigs to submerged grass in June.

In fall, both spots and largemouths turn to chasing shad on top, and anglers who love to run-and-gun can frequently get in on fast action by throwing noisy topwaters or fast-moving lipless cranks to these outbreaks.

Though Pitts catches plenty of bass when that’s the order of the day, his specialty is crappie fishing, and for that he’s convinced there’s strength in numbers—he routinely puts out 8 to 10 rods to slow troll tiny jigs, mostly Bobby Garland’s in 1/24 and 1/32 ounce sizes. 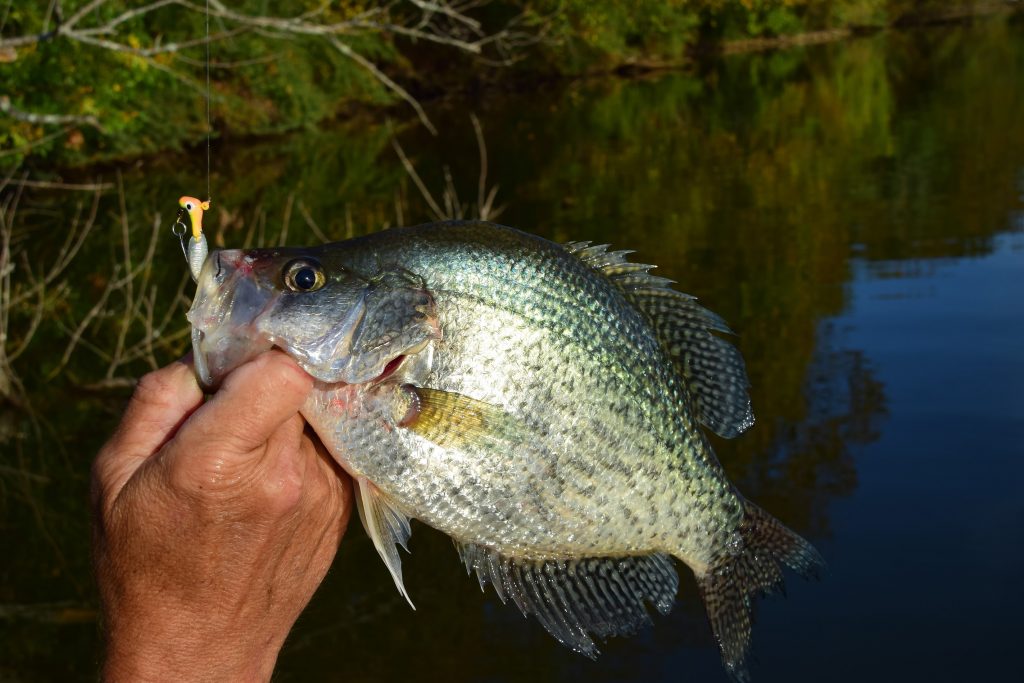 “Except when they’re spawning, the crappies here are schooled in the channel, both on the river and in the large creeks,” Pitts said. “I put out a spread of different weights, which lets me cover various depths, and I use rods from 8 to 12 feet long, which lets me cover a lot of water on every pass. We go slow, less than a mile an hour, but we cover the water and we find them.”

He suggests putting out all line, six  pound-test Hi-Viz Vicious mono, to the same length, which allows making repeated turns with less chance of tangles as the boat passes back and forth over likely water. He likes the high visibility line because it allows him to watch for tangles.

Another Neely Henry Fishing tip is “shooting the docks”, using a bow-and-arrow cast with light spinning tackle to skip a jig far back under a boathouse dock.

“There are brush piles around almost every boat house on the lake, and the crappies hang on these almost year around,” says Pitts. “If you can skip a 1/24 ounce jig way back under the decks, you’ll get bit almost every time.” He uses seven foot  light-action rods and six pound test mono for his shooting trips. 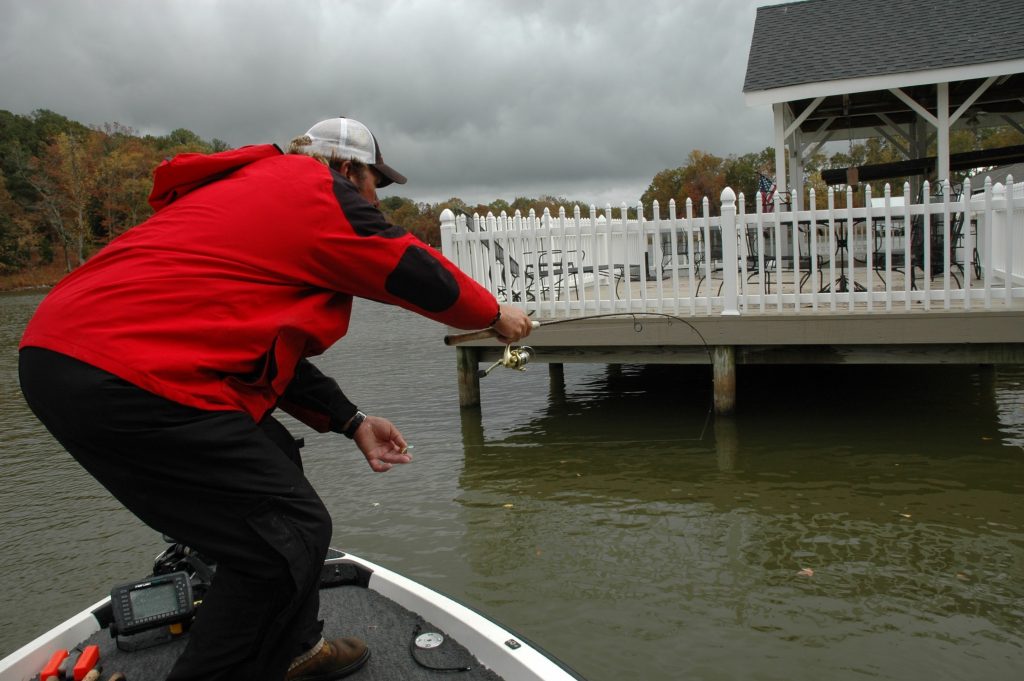 Lee Pitts fires a jig under a Neely Henry dock.

In spring, when the fish head to the shorelines, he switches tactics to a float-n-fly arrangement, with a little fixed float four to six feet above a 1/24 ounce jig.

“I cast this on an eight foot rod, which allows me to swing all that line better than a short rod would,” Pitts said. “I cast it around brush or standing trees, and then just sort of shake the rod to move the float a little—a crappie usually doesn’t like a lot of movement in the lure. I fish it just five or six  feet around the brush—once I’m clear of that I reel in and make another cast.”

Pitts says the crappies run large in Neely Henry, with many considerably fatter than in other lakes on the chain. His best ever Alabama crappie came from the lake, a giant three pound,eight ounce fish that was 17.5 inches long. The fact that Pitts sometimes leaves his home lake, Weiss, which is known as the “Crappie Capital of the World”—to fish Neely Henry says a lot about the quality of fish here. (Contact Pitts at www.pittsoutdoors.com.)

Unfortunately, there’s currently concern that Neely Henry’s productivity could take a hit from a proposed chicken processing plant a short distance from the shore, built in the watershed of a creek that drains to the lake.

Pilgrim’s Pride, the processing company, says the plant adjacent to Northeast Alabama Regional Airport would bring 100 jobs to the area, and would employ state of the art technology to prevent odors and harmful effluent from leaving the facility.

But locals are massively opposed. A Facebook group called “Opposition to the Gadsden Airport Rendering Plant” has drawn some 9,500 members in just a few months and the Greater Gadsden Area Tourism Commission has passed a resolution opposing the plant, which they feel could reduce the area’s appeal to visitors including anglers and boaters according to executive director Hugh Stump. 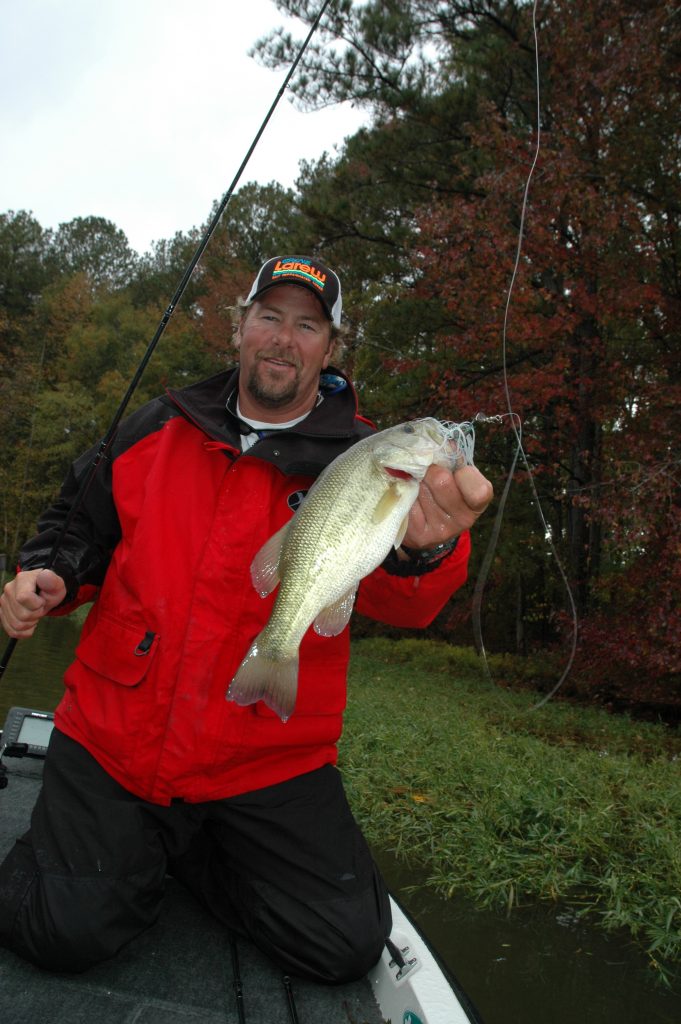 Justinn Overton, executive director for Coosa Riverkeepers, says the group’s concern is that adding over 600,000 gallons a day of additional effluent to the city’s already burdened sewage system would almost surely increase overflow issues which have already added excessive nutrient to the lake periodically, clouding the water and reducing fish production.

“We should be working to clean up these problems that already exist, not potentially adding to the problem,” Overton said. “Residents are starting to ask whether we want to be a recreationally-oriented river town, or a factory town. This industry would push us in the wrong direction.”

Buck’s Island Marine, one of the largest and oldest freshwater boat dealers in Alabama, includes a tackle shop where the staff truly understands fishing Neely Henry, since the huge facility is just a few hundred yards from the lake. 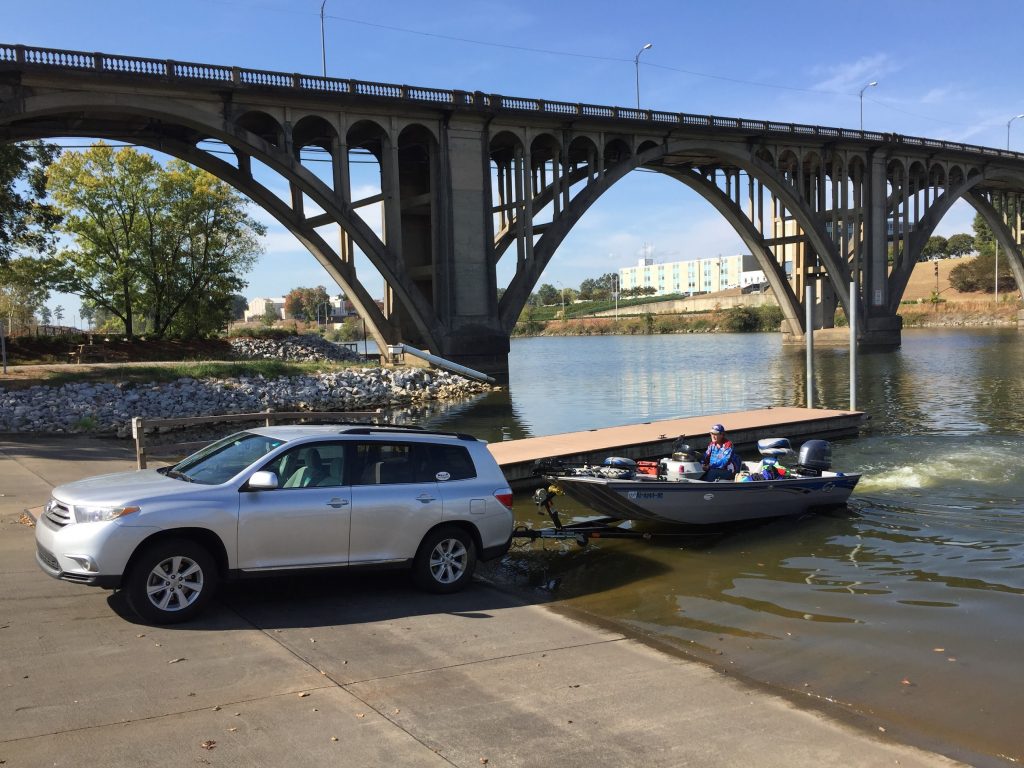 Launching your bass boat at Neely Henry is a breeze at the ramp near the bridge.

Their Tackle Loft stocks all the latest lures from Bill Lewis, Booyah, Rapala, Heddon, Storm, Lucky Craft, Missile Baits and dozens of other well-known tackle companies, and even includes the hard-to-find (and expensive!) Bull Wake Shad that’s such a killer for dawn patrol anglers fishing shoreline submerged grass at the lake. They also carry a full line of Daiwa and Lew’s rods and reels, Costa polarized glasses and kayaks rigged for fishing. They also sell fishing maps of the lake, of course, and you can shop their extensive online store even if you don’t visit the area;  https://shopbucksisland.com.

For information on lodging, boat ramp location and other things to enjoy in the area, including hiking trails and Noccalula Falls Park, visit the Greater Gadsden Area Tourism Commission here: https://greatergadsden.com.