Summer crappie fishing can yield some of the biggest crappie of the year, if you know where to find them and how to catch them.

GDO interviewed two of the state’s top crappie guides, Brad Whitehead of north Alabama and Tony Adams of south Alabama, on how to catch crappie in the summer and how they produce limits of crappie when most folks are sitting in air conditioning, drinking sweet tea. 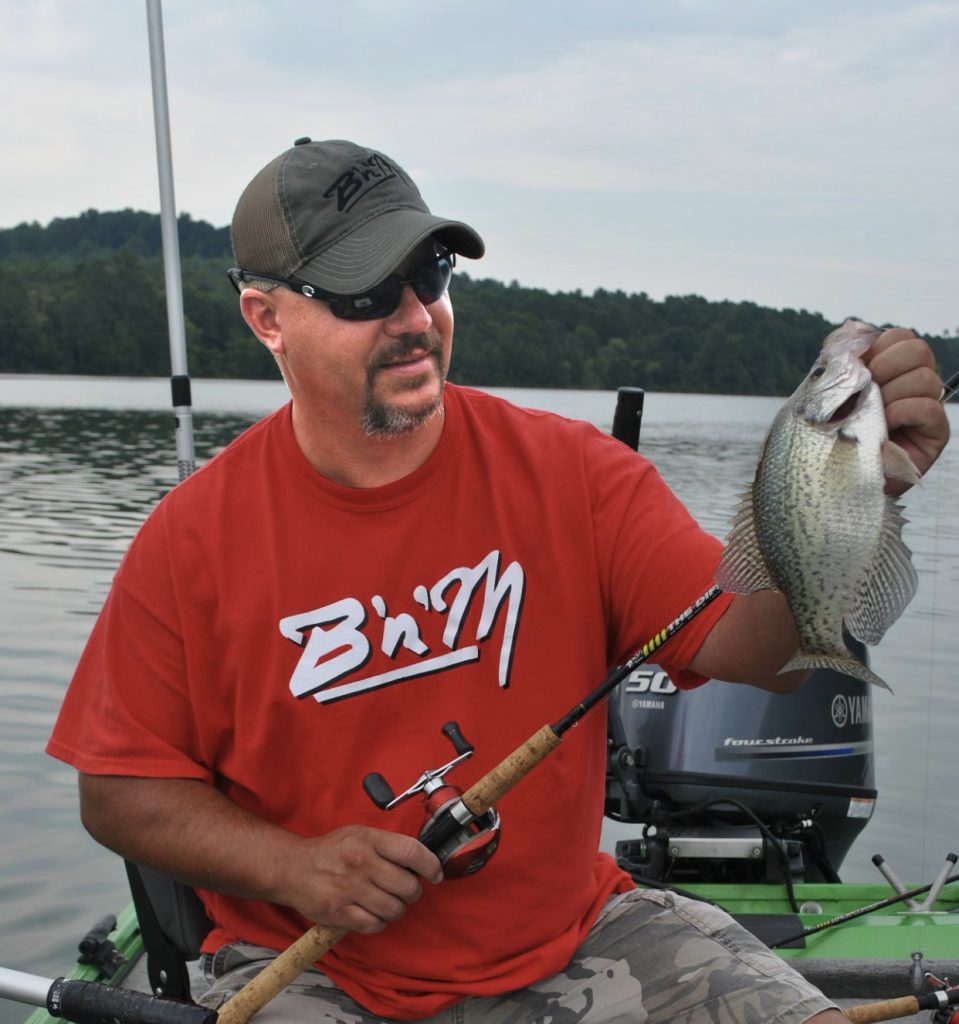 Brad Whitehead and his customers have fished B’n’M poles for many years.

Brad Whitehead of Muscle Shoals, Alabama, has guided for crappie in north Alabama for about 20 years.

“When I first started fishing for crappie, I was one of those guys who thought you only could catch crappie in the spring. However, through the years, I’ve learned that you can catch crappie every month and every day of the year,” Whitehead said.

“This pole is very sensitive and allows the angler to see even the slightest bite when fishing. I’ll use a 1/16-ounce jighead with a Slab Magnet (soft-plastic lure) on it. My favorite colors of this do-nothing jig with a wide tail are Sho Nuf, Percy, Salt and Pepper and Fast Lane. I fish a 1/18-ounce No. 5 split shot about 18 inches above the jig. I also add to the hook one of the best lures for crappie in summer, a Crappie Magnet Slab Bite that’s impregnated with scent and glitter that dissolves in the water to imitate scales coming off a baitfish.”

Currently Whitehead’s fishes the B’n’M Duck Commander poles, since they’re some of the most-sensitive and lightweight ones, however, they’re strong enough to put a  two pound crappie in the boat.

“I like my Humminbird Helix 12 to locate structure and also to keep up with the crappie. On a windy day, crappie will pull out of structure and suspend, often 10-15 yards away,” Whitehead said.  “On windy days, I’ve caught just as many crappie on the sides of structure as when my boat’s sitting right on top. Without good electronics, you may not be able to pinpoint those crappie holding on that brush.”

“I have a jig on each of two rods per person and fish out of my 754 War Eagle Blackhawk boat.  It’s a crappie boat designed for side pulling. I like clear six-pound-test Vicious line, since the water is usually clear in August where I guide on Pickwick and Wilson lakes, as well as the small lakes at the Bear Creek Development Authority.” 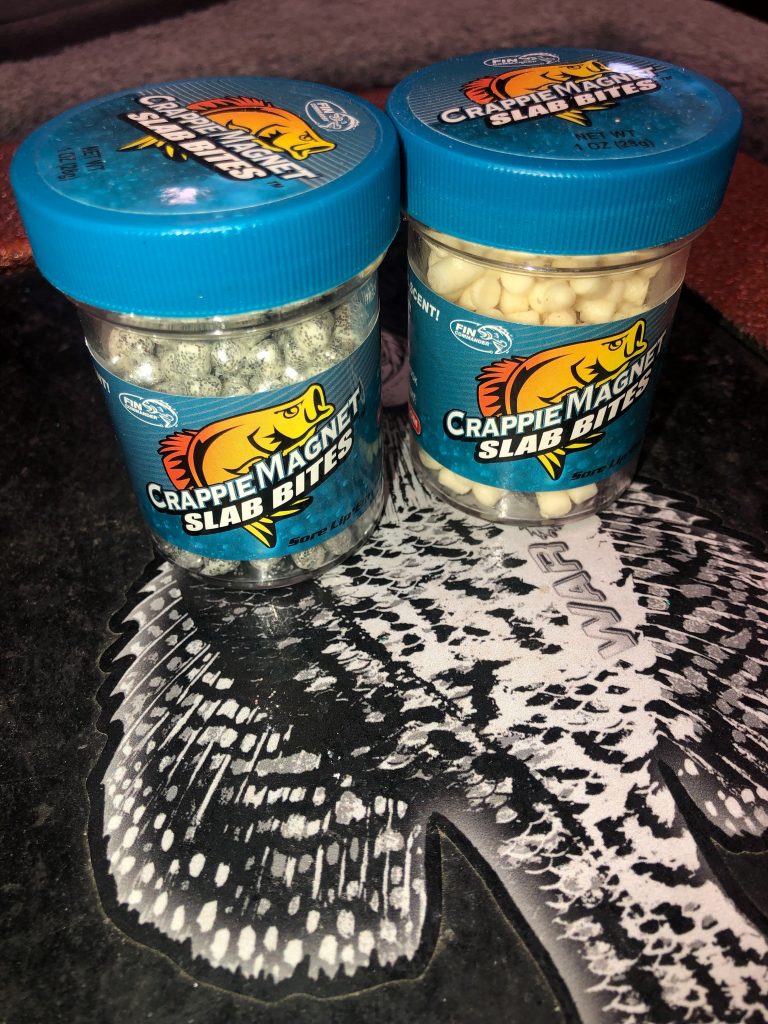 Because crappie are somewhat sluggish in the summer, just above the hook’s barb, Whitehead adds a Crappie Magnet Slab Bite.

Patterns of Summer Crappie and Tactics for Catching:

Whitehead explained that post spawn crappie are looking for the first deep-water structure where they can hold that creates an ambush point to attack baitfish. He fishes in 14-20 foot deep water over brush piles or stake beds he’s sunk. He lets the boat float over the structure, and when the jigs are above that structure, he stops the boat.

“The key to success is to keep the boat as still as possible, so our jigs sit dead still just above the structure,” Whitehead explained. “If you’ve ever watched crappie in a hog trough or an aquarium, you’ll see they’ll hold on structure. Minnows added to that tank will suspend just above the structure and not move at all or only slightly. In summer, most of the crappie you catch will be holding tight inside the structure, looking up and pulling out of that structure to attack baitfish. Generally you’ll get a violent strike in hot weather when crappie attack a bait, making your line jump and the tip of your pole bounce.”

Whitehead says this pattern usually will hold up until the middle of September. 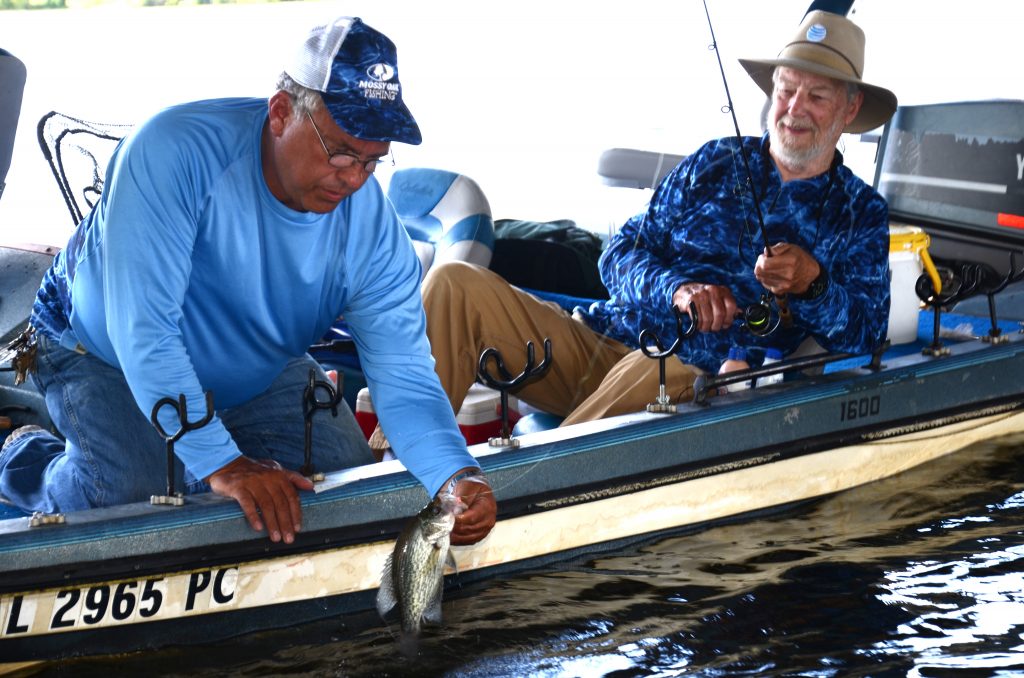 Tony Adams likes B’n’M Poles because during the summer when the crappie bite is light, his customers can see that subtle twitch on the ends of these poles and set their hooks.

“Crappie are much like us. When north Alabama temperatures reach 90+ degrees, we all get somewhat sluggish. However, when someone brings ice cream to us, we’ll eat it,” he noted.

Catching 8-10 crappie from each piece of structure isn’t uncommon in summer.

According to Whitehead the best day to fish this tactic is when there’s no wind and your jigs will look more lifelike, suspended above the cover.

“I generally catch the most hot-weather crappie in the morning’s first 5 hours – 5:30 am until 10:30 am. A lot of boat traffic on the lake often seems to make the crappie quit biting,” Whitehead pointed out.

Whitehead mentions that many crappie fishermen choose to fish with guides during the summer because the guides are on the water every day and have identified the most-productive structures to catch the most crappie. To locate other underwater brush piles, he recommends taking your wife and children boat riding, turning on the side-scan feature of your electronics and looking under piers and drop-offs and on ledges and points.

Tony Adams of Eufaula has gone summer crappie fishing on Lake Eufaula for 30+ years. He first started fishing with his granddaddy and his uncles at night for crappie and during the spring crappie spawn. In 1989, he moved to Eufaula and started seriously fishing for both crappie and catfish – realizing crappie, just like people, have to eat every day.

According to Adams, summertime crappie concentrate on:

2) Ledges that drop-off into the main river channel. Immediately after the spawn, the crappie usually will move-out to the first ledge away from the spawning grounds and concentrate there until the weather becomes hot, swimming into the shallow water of the spawning flats to feed and moving back to the ledges once the weather warms-up.

Next the crappie will move out to the ledges in 14-21 feet of water in creek and river channels, holding on their shady sides. As the baitfish come up above those ledges, the crappie move up to feed on those shad;

3) Underwater humps (mounds and hills). In the mornings, when the sun rises in the east, the crappie generally will be on the west side of the humps, out of the sun and more or less hidden to ambush bait. In the afternoons, once the sun is setting in the west, the crappie will swim to the east (shady) sides of the humps. Crappie also will use the humps as current breaks, holding on the downside when current’s being generated; 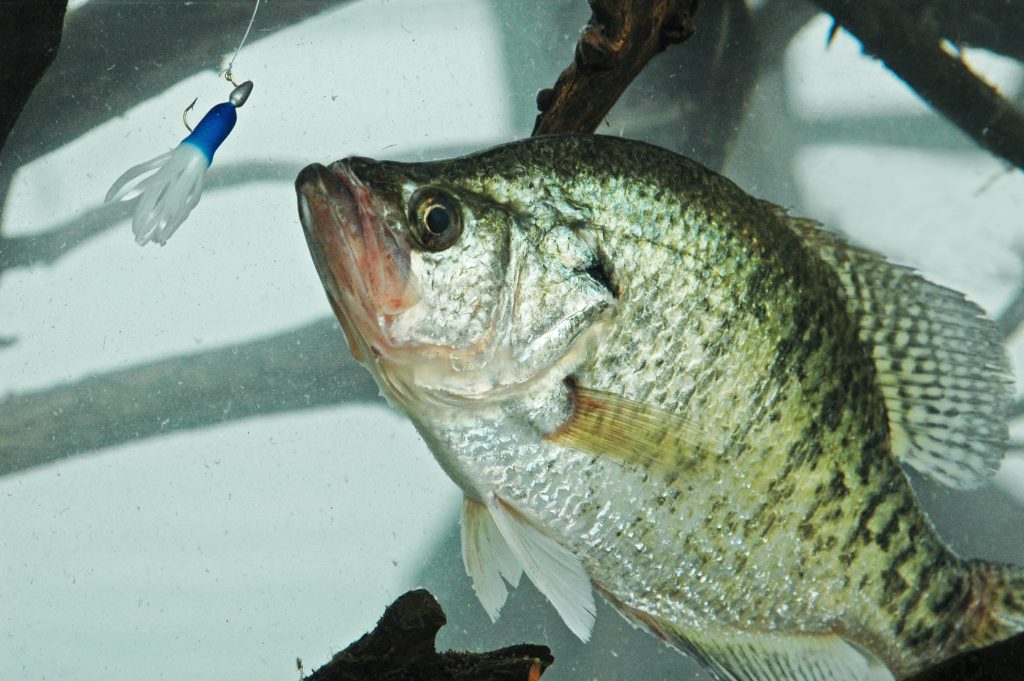 Most often Tony Adams will fish a soft-plastic crappie jig at the water depth his Humminbird Helix 12 depth finder reports the crappie to be holding.

4) Structures that Adams has put out before, during and after the spawn and placed in areas to give crappie more cover where they can ambush baitfish, including his 2,400 crappie spots he’s built. Adams started putting-out structures in Lake Eufaula in about 1994 to create crappie hot spots and has learned so much about what kind of structure draws the most crappie and where to place it.

“I started by cementing used Christmas trees in concrete blocks and sinking about 75-100 at or near some of the spots described including underwater creek channels and ditches, ledges, underwater humps and structure,” Adams reported. “I learned quickly that crappie only would hold on sunken Christmas trees for about 1 to 1-1/2 years. Later I used all types of material for hot spots, including French drain type pipes with holes in them. I’d place a 2-liter plastic bottle in the top end of the pipe, put foam in the top to hold the bottle in place, wire the pipe to a concrete block and sink it. But when the wire rusted and broke, the pipe floated away.”

Next Adams used PVC pipe, but this construction only produced a few crappie. Adams finally learned that the river cane (bamboo) he dried and the crepe myrtle limbs cut by neighbors worked best by concentrating this straight wood into 5-gallon buckets and sinking them.

“I’ve learned over the years that I want the brush to stand up to half the depth of the water column where I’m sinking the brush,” Adams says.

For instance, if the cane and crepe-myrtle limbs stand up straight 10 feet tall out of a bucket, Adams sinks them in 20-foot-deep water. This kind of straight-limb structure is much easier to build, carry out in his boat and sink. He also sinks 12-16 foot tall magnolia trees and has identified that the best depth for summertime crappie fishing is 15-25 foot deep water.

“On bright summer days, the crappie will concentrate in 12-16 foot water. On cloudy or rainy days, crappie will hold out away from the structure, usually in more-shallow water,” Adams explained.  “My summertime crappie fishing begins in December to February, when I’m building places to catch crappie during the hotter times of the year.”

To keep his most productive spots viable, Adams puts out additional structure on them about every two years. 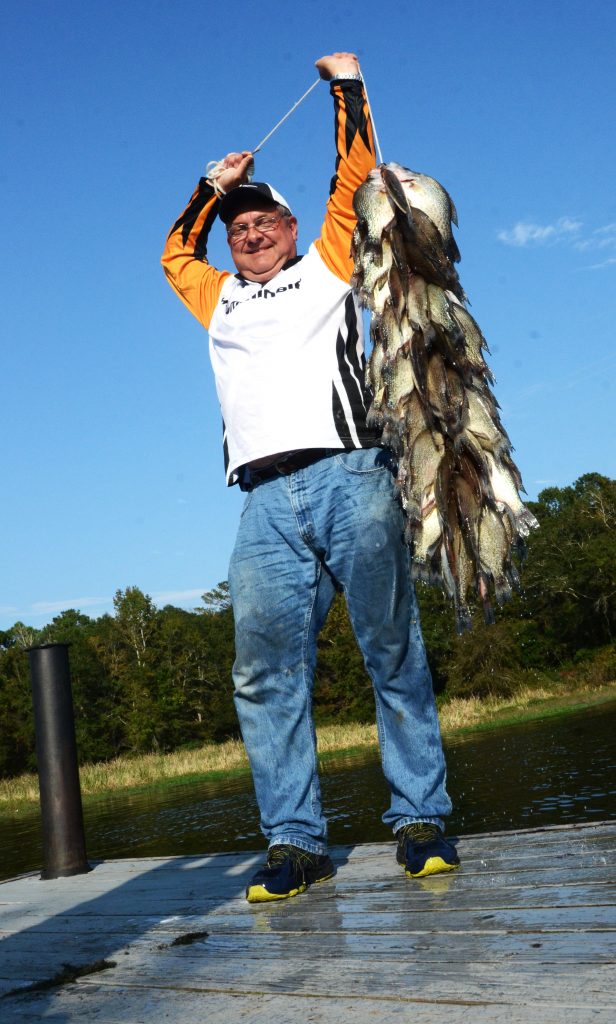 To produce limits of big crappie for his customers throughout the summer, Tony Adams will put out more than 100 crappie attractors each year from December-February.

“Most of my structure is arranged in a 30-foot diameter circle on the bottom,” he said.” When I pull up to fish on a spot, my customers from the front of the boat to its back all have structure on which to fish. I want everybody in my boat to catch crappie.”

How To Jig For Crappie – Equipment:

Adams fishes for crappie out of his War Eagle Blackhawk boat, model number 2170.

“I prefer a 10-foot jig pole to hook and pull crappie into the boat and also to judge the depth of water where I’m fishing a jig or a minnow,” Adams explained. “For instance, if you pull out enough line, so that your hook is at the end of your 10-foot pole, then once you put it in a rod holder, the tip of the rod generally is two feet out of the water, which means my anglers are fishing in eight-foot-deep water. If you need to fish in 16-foot-deep water, you can pull off another 10-foot length of line to the end of the rod’s butt to fish at 16 feet. However, the ladies who fish with me tend to prefer the shorter rods like the eight footer.”

“I also like the way these tips are made and the small orange-colored paint on the end of the rod, which makes seeing the bite much easier than a black color. In the summer months, the crappie don’t bite as aggressively as they do in the fall and spring, so being able to see the slightest movement of that rod tip when the crappie takes the bait gives the angler the advantage of setting the hook quickly” Adams explained. “Although the tips of these two rods are sensitive, there’s plenty of muscle in their back ends. These poles enable my anglers to set their hooks and pull the crappie that may be 3/4-pound up to two pounds each into the boat without having to use a net.”

Both Whitehead and Adams agree that, when summer crappie fishing, being on the water at first and last light enables them to fish and catch crappie in cooler weather.

If you enjoyed learning some of these Late Summer Crappie Fishing Tactics, check out my E-Book, the Master’s Secrets of Crappie Fishing, Tactics to Catch Crappie Year Round. Just click the book image above or HERE to check it out on Amazon.