Fish prefer some type of cover. Bass, crappie, bream, and catfish all feel at home around some type of cover. Just like humans have basic needs for survival, so it is with fish.  Obviously, fish need clean oxygenated water to survive. They need an accessible forage fish food source. They need cover, either natural or man deposited pond structure, such as Christmas trees, rocks, fish attractors or whatever will provide cover and protection.  Natural features, such as drop-offs, cuts, shoals, shelves and other things work great at building fish habitat.

Unfortunately, in a lot of ponds, especially those older bodies of water, cover isn’t always available. It may have been there back in the good old days but nature has run its course and now they have eroded down to a shadow of their original stature. Or it may still exist in deep areas of the pond where, during the warm months, is depleted of oxygen so harbor no fish.

Norman Latona is president of Southeastern Pond Management (SEP) headquartered out of Calera Alabama.  SEP offers a wide range of pond and lake management services, including pond stocking, pond construction, liming, and lake mapping, just to name a few along with a range of products, such as fish tagging kits, SportMax, which is a nuisance aquatic vegetation control, and even custom designed Pond-Toon fishing boats. 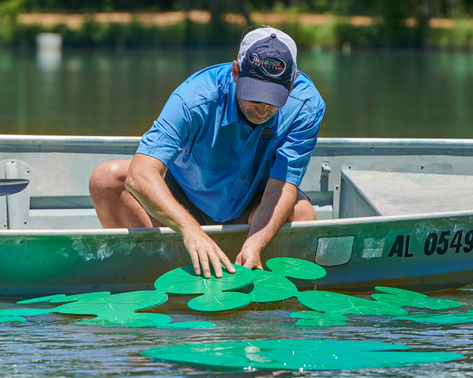 Artificial fish habitats are a great addition to your lake or pond.

Chris Blood is marketing manager for Texas Hunter products.  Texas Hunter has been a well-known name in the deer stand/blind and feeder industry for years and also offers a comprehensive line of fish feeders, fish attractors, and other accessories.

In the last few years, they have been working “hand in glove” with SEP along with Auburn University to develop fish structure for ponds and attractants to enhance the fish habitat.

“Fish are pretty adaptive and don’t necessarily care what the cover or habitat look like, they just know that they can hide in it, ambush forage fish from it and escape predators in it,” Latona said.  “Texas Hunter has taken a scientific approach in developing habitat structure that is easily deployable into the lake and very angler friendly in that it is almost snag proof, lasts a long time and is very effective in attracting and holding fish.”

Blood said that working with the Auburn University school of design resulted in 185 different fish attractors and structure designs which was then whittled down to six new products.

“We’ve boiled it down to about six new products that we’re proud of and feel like they’re very effective and we’ve got a little bit of everything including top water, midwater shallow water, there’s even a spawning device. So this is our initial launch into the fish habitat market.”

While pond owners can create their own diy fish structure out of Christmas trees, rip-rap, pallets, old lumber, and all different kinds of materials depending on how creative the depositor is and how effective they are at scavenging stuff, it is a huge job sinking all of that material and much of the time they don’t last and it is a continuous and strenuous effort. 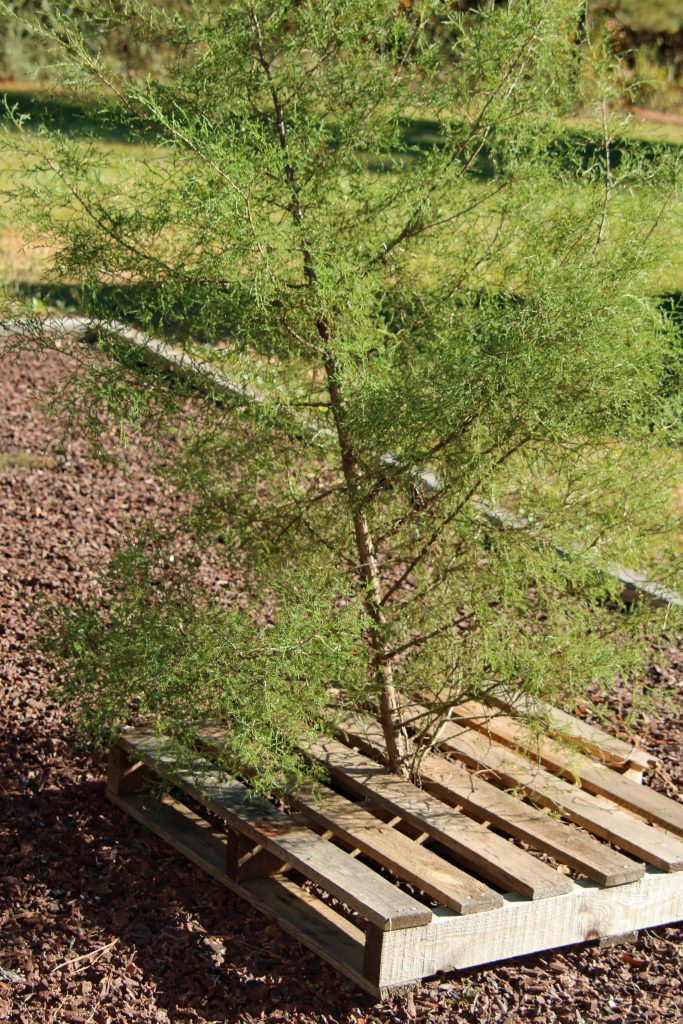 Trees and brush can be secured to old pallets and sunk in your favorite fishing hole to attract any species of fish.

“Our products are made out of the same materials as kayaks and floating docks and are environmentally friendly and they are easy to assemble so you can get them out on a boat, put them together, drop them in the water knowing that you won’t have to do this job again for a long time,” Blood said. “They are basically lifetime products and once you get them in the water, they aren’t going anywhere.”

One of the new Texas Hunter fish habitat products is the “fish pyramid”.  The best way to describe these fish attractors is that they look like a pyramid but squared on the top.  It is full of slots similar to a colander, so forage fish, like shad or bluegill, have a place to escape from predators and it offers insertable “shade blades” that provide shady spots for fish to hold in.  The unit has teeth on the bottom that anchor it to the ground to keep it in place or, since it is constructed of floatable material it can be attached to a weight, such as a cylinder block and be suspended at different depths.

“We make two sizes of fishing pyramids. The first one is about three and a half feet tall and an extra large version that is about four and half feet tall and four feet wide at the base and has a surface area of 146 square feet,” Blood pointed out. “You can suspend them by just simply attaching them to a cinder block and dropping them off the side of the dock or the side of the boat. Or you can attach the cinderblock inside, with some cables that come with it and drop it in, it’ll sink to the bottom.”

“You can put it on the bottom, and or you can suspend it out there to create even more shade and structure in that vertical water column and, and the bass will hang out under it and crappie and other fish will swim around that unit.” So there are two ways to install it, depending on what you want to achieve,” Blood added. 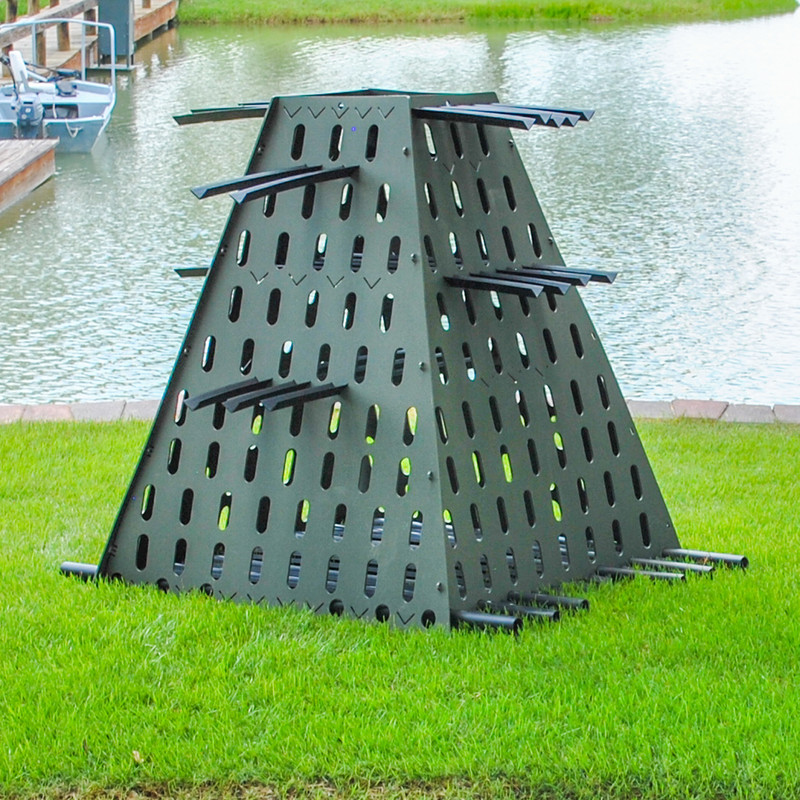 Forage fish can easily get in a out of the slots in this fish attractor pyramid.

Latona emphasized the importance of structure, especially in shallow water.  The issue all revolves about “lake stratification” which basically means that the water starts to warm up in the late spring and early summer and by the time we get to the heart of the fishing season most of the fish are living in the upper several feet of the water column because that is where the oxygen is.  While they would prefer to be in the cooler water, unfortunately the colder the water is the less oxygen there is for the fish.  They might make an occasional dash into the colder water to attack a forage fish but there is not enough oxygen in the water for them to survive.

“Larger items like the pyramids, with the ability to keep them up off the bottom ensures that fish can use them year-round, particularly in the part of the season, when we’re typically doing a lot of our fishing.  You could take these pyramids and rather than drop them in 10,12,15 or even 20 feet of water, where in the summertime, that depth probably doesn’t have many fish, if any, we can take that pyramid and suspend it in eight or 6, 8 or even 10 feet of water, wherever location and depth we choose and those fish will absolutely utilize it.”

“They can even be stacked at different depths or used in conjunction with some surface products like artificial lily pads and artificial fish grass,” Latona pointed out.

To a point, aquatic vegetation is a good thing.  It provides cover and shade for predator and forage fish and the nutrients help a pond prosper.  Still, it can become too much of a good thing and make fishing, especially topwater fishing, problematic.  Too much aquatic vegetation, either floating or “creeping” can be controlled with proper liming and fertilizing, introduction of carp and even with herbicides.

To replace the loss of floating vegetation Texas Hunter has introduced their pvc fish structure designs – “Lily Pads” and “Fishing Lilies”.  The Lily Pad is a large 30”x30” single pad while the Fishing Lilie is a cluster of different size pads attached together and measures 33” x 38”.

Artificial cover for the fish in your pond will allow you to continue topwater fishing without having to maintain overgrown aquatic vegetation.

“They’re made out of a PVC foam material and are a bright green color like a natural lily pad,” Blood said.  “They come in a six pack and you can drop them in and anchor them with just a half cinder block with a marine bungee cord that expands and contracts. So if you have a big rain and the lake level rises, the pads will keep floating on the surface.”

“This is really a great solution for top water action. And we’ve actually got a couple of these things in a lake that fish fairly frequently and it didn’t take but just a few days, literally, to have fish using it and now we know where we can catch fish,” Latona said.  “Now, most days, it’s the destination point, be it morning afternoons or whenever we go out, we just head for the lily pads.  They really, really work.”

“They’re also pretty much snag proof and you’d have to try hard to get tangled up in one of these things, which is even nicer than natural vegetation. Theoretically, you could put them in as deep as you want and I think fish would use them in any water depth and they just tuck themselves underneath them.” Latona said.  “They’re looking for that cool, shady spot that lends itself to ambushing forage and they’ll just lay there and wait for that frog to come mopping across the top of them.”

“Fish Grass is made out of a polymer material that is buoyant so it floats. The total strips are 16 inches wide and mount to a 16-inch square platform and you can drop them in and they’re just instant snag free vegetation,” Blood said. “We have two and four feet high models depending on the depth of the water you are placing them in. You can drag your lure through without being hung up and it just makes a great bass hangout.”

The final fish attractors offering is the “Spawning Colony” which is basically a three-foot round, six-inch-high device that once filled with gravel, allows both predator and forage fish to spawn. It even features slots where fry can escape into to avoid predators. 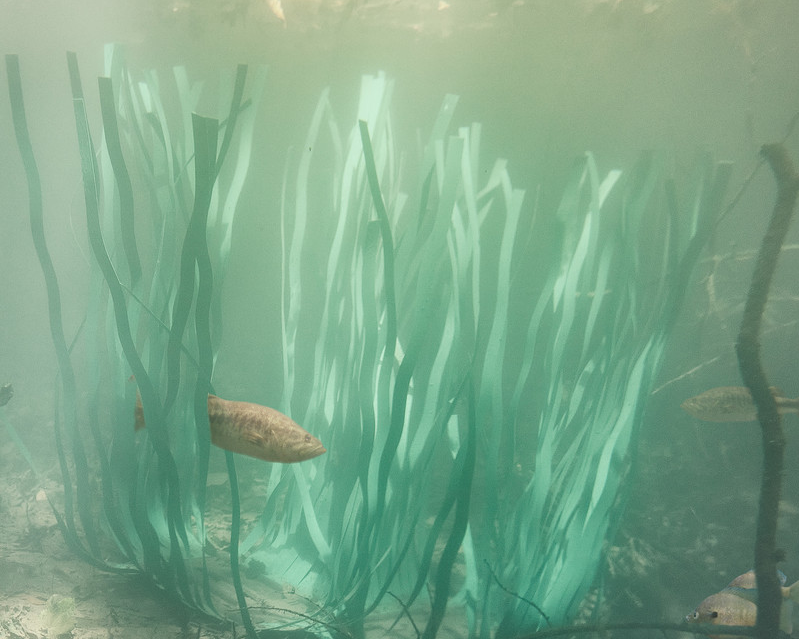 Fish are naturally drawn to the artificial fish grass.

“We designed the Spawning Colony, which is a three-foot round device that’s elevated up off the bottom surface by about six inches and you can put your gravel in there and the fish will utilize them to attach their eggs and spawn on these devices,’ Blood explained. “In addition to the spawning feature, we designed fish slots, so that when the fry, when they hatch, can escape into the base of the Spawning Colony.”

“What happens in a lot of cases is that fish predators will be there ready to poach those fry, when they hatch and this gives them a chance to grow a little bit bigger and escape from predators,” he said.