It is said that you are what you eat. While that statement is normally meant to refer to a person’s health it is also applicable to every living creature, including largemouth bass. Norman Latona is founder and president of Southeastern Pond Management (SEPond), a full-service pond management company with locations in Calera and Auburn AL, Canton, MS. And Jackson, TN. He points out that largemouth bass are extremely efficient and opportunistic predators that can quickly deplete the natural forage base of a pond if there are too many of them and not enough bait.  In order to keep a good ratio, pond owners need to pay attention to harvesting the surplus bass and focus on selecting the best forage fish for ponds.

“Largemouth bass like to eat, eat and eat and they can eat themselves out of house and home especially if pond owners don’t make sure that there is a good balance between the predator bass population and the forage fish population,” Latona said. “With largemouth bass it is hard to keep groceries around. 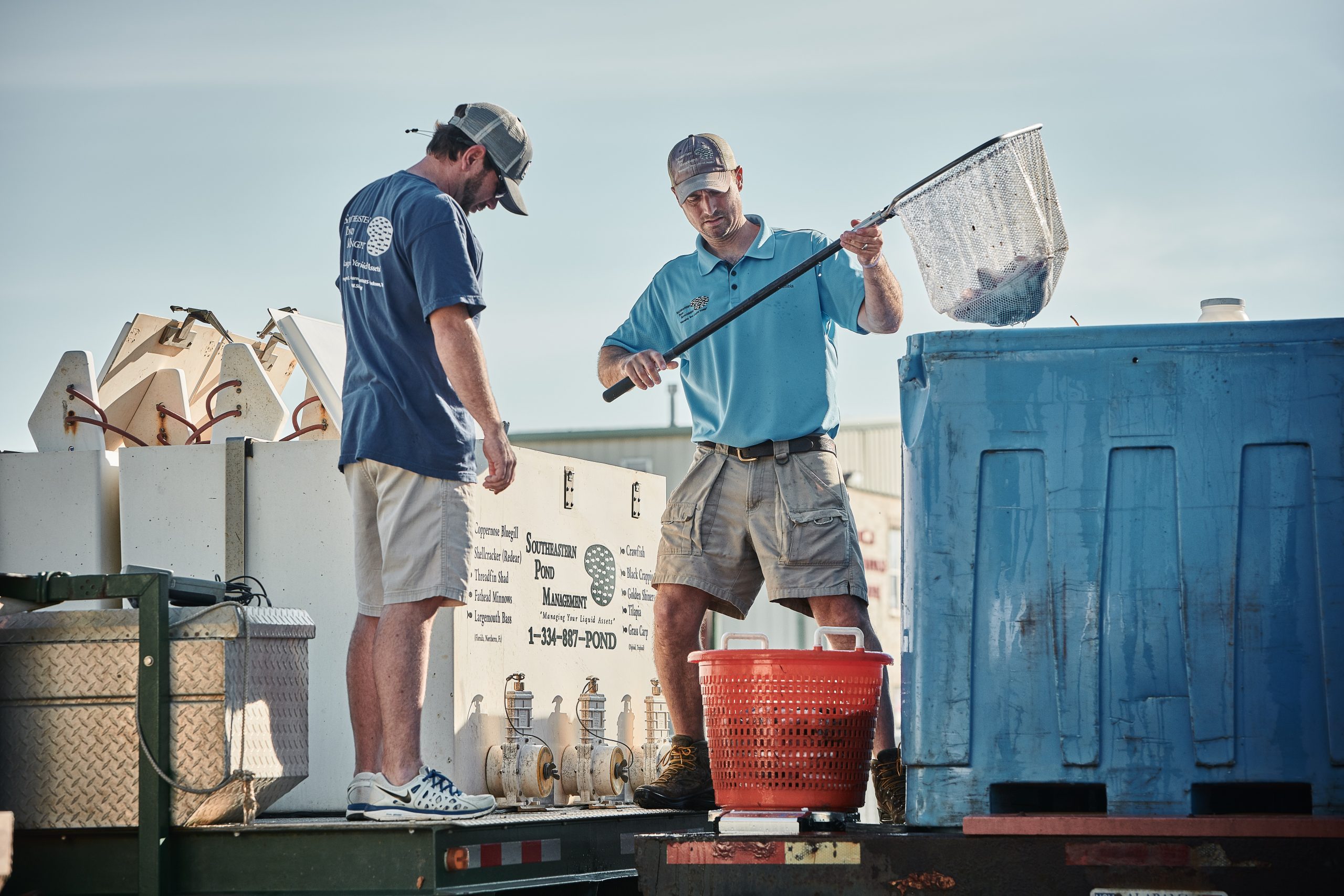 SE Pond stocks forage fish in ponds for a number of reasons including to establish a fish base in new ponds, to control vegetation, to increase the diversity of species composition, to just give a pond a food “shot” and to establish a sustainable forage fish population.

“A common condition that we encounter is what we call ‘predator crowding’, which is where the bass are abundant but they are skinny and run in the 12-14-inch range and harvest is the first line of defense with forage fish stocking coming afterwards,” Latona noted. “Harvest removes mouths and stocking adds food to the mouths we have.”

SE Pond stocks forage fish in ponds for a number of reasons including to establish a fish base in new ponds, to control vegetation, to increase the diversity of species composition, to just give a pond a food “shot” and to establish a sustainable forage fish population.  To that end, when selecting the best forage fish for ponds, their stocking inventory includes bluegills, threadfin and gizzard shad, trout, fathead minnows, golden shiners, tilapia and others, including crawfish, which is a healthy “snack.

Latona has found that the best times to stock forage fish for ponds is in the early spring in order to increase the edible nutrients prior to bass spawning and in the fall, but stocking forage fish is pretty much a year-round endeavor.  The only exceptions are with “seasonal” fish such as rainbow trout and tilapia. 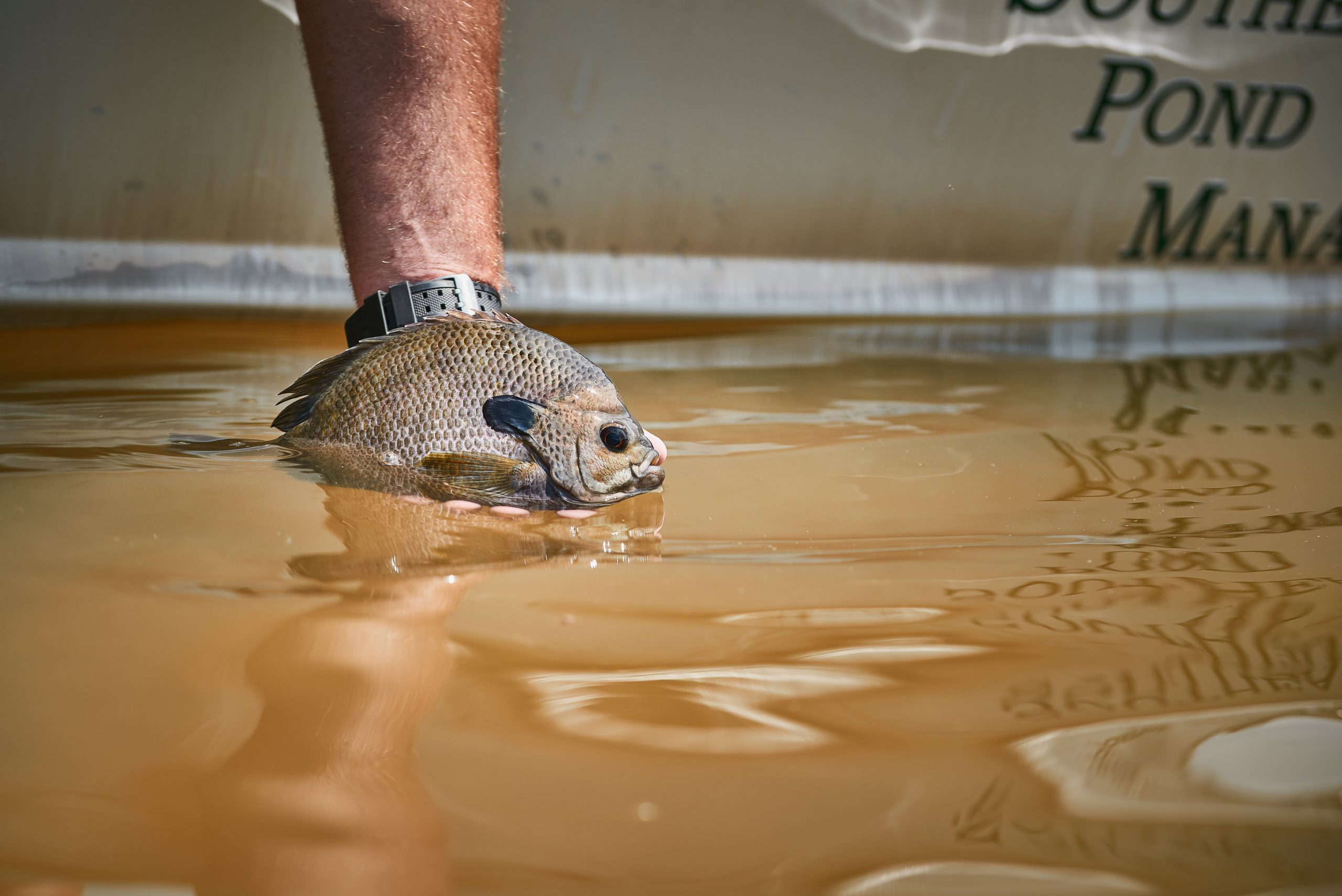 The best forage fish for ponds are the venerable bluegill and threadfin shad, primarily because they spawn multiple times and can grow to become a good bass mouthful.

“We stock tilapia, where they are allowed, in April and May and they will spawn multiple times all the way up to the fall but they can’t tolerate it when the water gets down to 40 or 50 degrees,” Latona said.  “It is the opposite for rainbow trout which we stock in the fall because they can’t live in the summer water temperature but they do great in the winter and are fun to catch and eat and are good short-term forage for trophy bass.

In the fall, Latona’s best forage fish for ponds are the venerable bluegill and threadfin shad, primarily because they spawn multiple times and can grow to become a good bass mouthful. That active reproduction and quick growth rate makes them an “enduring” forage fish that can produce a sustainable population and not have to be re-introduced every year.

“Forage for us in the fall is primarily intermediate size, sexually mature three to five-inch bluegill,” Latona said.  “They are a sizeable piece of food for a bass and they are sexually mature and ready to reproduce as soon as they get in the pond which they frequently do”

The goal is to create and maintain a balanced aquatic ecosystem to make sure that the fish are not exceeding the “carrying capacity” of the pond and that the bass have enough forage to eat to achieve the objectives of the pond management plan. That could be quality bass, which Latona describes as fish in the 16-20 inch range or even trophy bass which is anything larger than 20 inches.

Latona explained that when the science of pond management was first being developed, the goal was to manage farm ponds for protein, as in “meals”, so there was greater emphasis on the harvesting of bass for food.  Down through the years, with the advent of the “catch and release” movement, which makes sense for heavily fished bodies of water with a diverse species composition, harvesting fish from normally lightly fished ponds for consumption was largely replaced by the recreational aspect.  Today, for the most part, people don’t eat what they catch and they fish for fun.  That makes harvesting excess bass from a pond incidental and sometimes even non-existent. 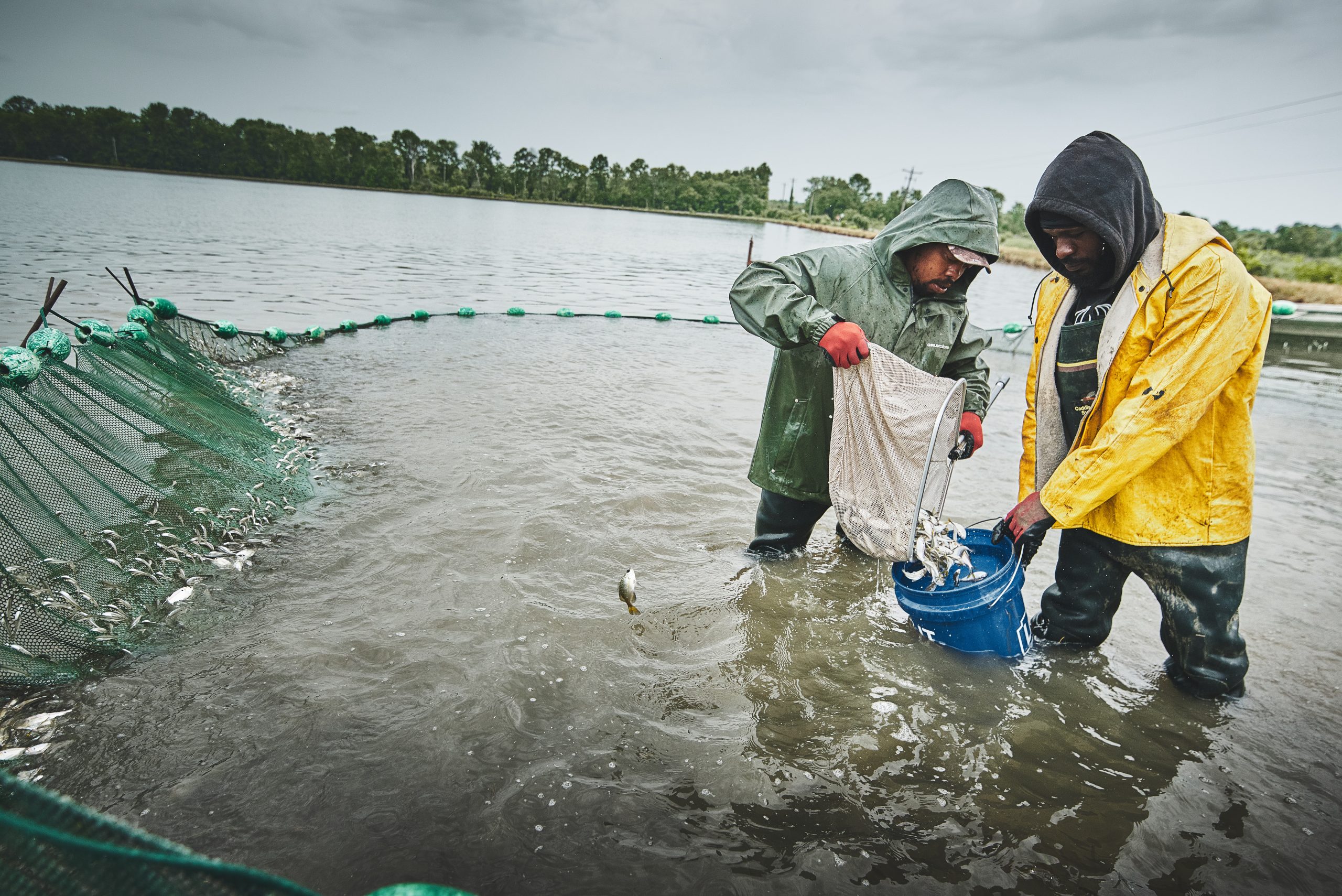 Consequently, because of that, the ratio between predator or “consumer” fish and forage or “consumed” fish can get out of kilter.  The result is either a preponderance of skinny undersize bass and possibly an overload of “slab” bluegills, which the majority of bass can’t fit in their mouths.  Or both.

“It’s the same thing with stocking threadfin shad.  We are stocking the best forage fish that will reproduce in abundance with the goal of creating more sustainability and that is where harvest comes in,” he said.  “The more effective we can be in terms of harvest to keep those bass numbers under control the greater the results will be in terms of sustainability of the forage we stock.”

According to Latona, depending on the dynamics of the pond, a normal bass harvest, in order to keep the predator/forage ratio on track is about 30-40 pounds of bass per acre per year.

“We’ve found that stocking of bluegill and threadfin shad when coupled with adequate harvesting and predator removal that we can actually reverse or prevent this trend toward a predator crowded environment,” Latona noted.

So, selecting the best forage fish for ponds has happened, now the question is how many fish need to be stocked and the “rules of thumb” are different for bluegills and threadfin shad. 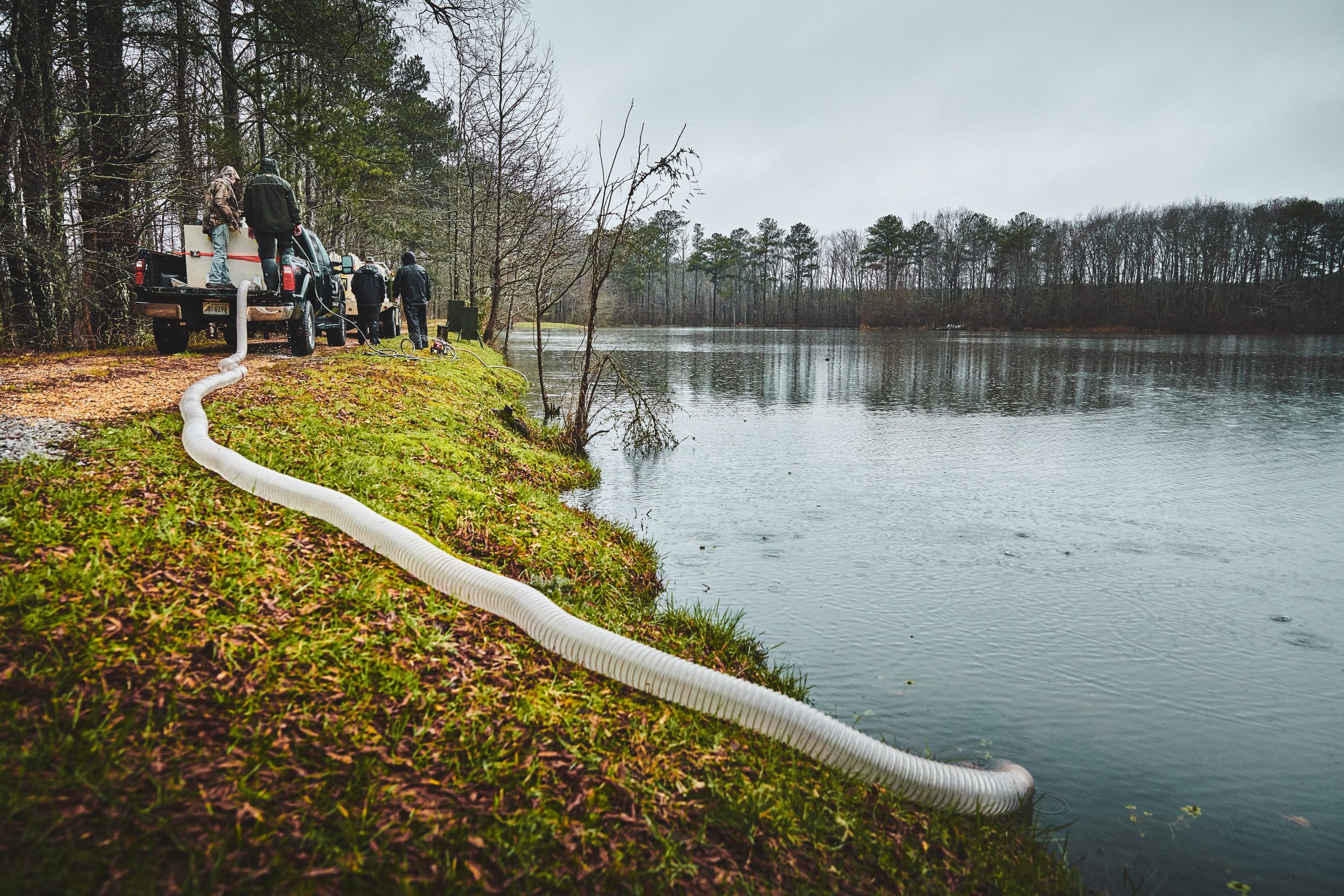 With bluegills, the stocking level of sexually mature intermediate size 3-5 inch fish range between 250-500 per acre.

“With bluegills the stocking level of sexually mature intermediate size 3-5 inch fish range between 250-500 per acre,” Latona said.  “For a 10-acre lake we may put in between 2,500 -5,000 fish but it depends on the pond.  In some cases, we may find that 250-300 fish is adequate and others may require 400-500 per acre.  We typically find that in larger bodies of water, like 35 acres and up we stock at a little lower density but some of that is just cost management.”

Latona pointed out that unlike bluegills which gravitate toward shore, structure and cover, threadfin shad are not shoreline fish and pretty much hang out in open water in schools.  So generally, the larger the body of water the lower the stocking density when selecting the best forage fish.

“In a 10-acre lake we might stock 1,000 threadfin shad per acre or roughly 10,000 total, in a 20-acre lake we may stock the same number even though it is twice as much water and half the rate,” Latona explained.  “Larger lakes tend to have more open water than smaller lakes and allows the shad to stay away from structure and habitat where ambushing largemouth bass hide and wait until food swims by.”