Dealing With Too Many Small Bass In My Pond

Dealing With Too Many Small Bass In My Pond

As the host of the Great Days Outdoors Alabama Freshwater Fishing Report, every week I get to talk to expert anglers and guides as to what fish are biting, where they’re biting, what lures, bait and tackle to use, when and how to use them and a bunch more. We also cover topics like, too many small bass in my pond, how to fix an overstocked pond, bass pond management, and electrofishing. I’m a lucky guy.

We also interview individuals who are in businesses that directly relate to fishing and the outdoors and one of them was Norman Latona, owner of Southeastern Pond Management, headquartered in Calera, Al. with offices in two other states.

One of the biggest issues that listeners have shared with me, as it relates to pond fishing is that when they fish ponds, ranging from three acres up to 15 or even 20, is that they are “catching too many small bass in my pond” but aren’t catching any big fish. It’s frustrating to catch lots of little fish but not one big fish.  By little fish I mean one weighing a pound or so but no ‘braggers”. 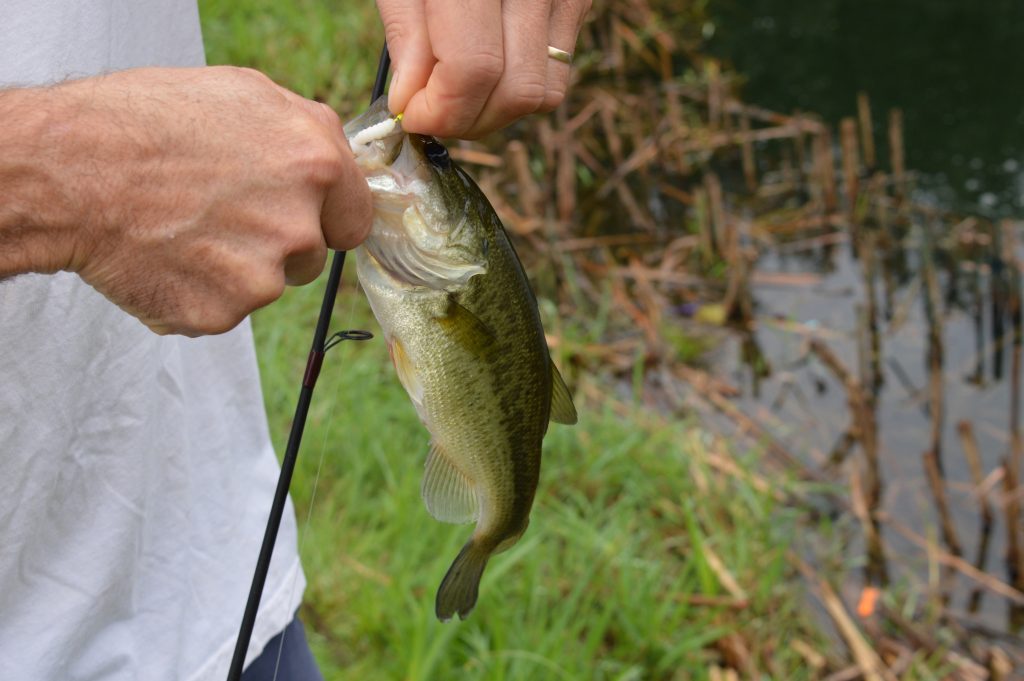 Latona maintains that if your pond is producing a lot of 10-14 inch “skinny bass” with bucket mouths your pond is most likely “bass/predator crowded” and is out-of-balance.

“If you are catching a fish that has a bucket mouth, a five-pound head and yet he weighs a pound and a half or catch a fish that weighs two pounds that isn’t plump and has a sucking belly, there probably is a balance issue,” Latona said.

“That is what we refer to as bass or predator crowded and it is the most out-of-balance condition we run into,” he said.  “The fish may be easy to catch, but it is frustrating and not that much fun when small bass is all that you catch.”

Latona pointed out that bass are voracious predators and, if left to their own devices, would eat themselves out of house and home and that there are very few forage species that are capable of keeping up with their appetites.  He remembers a college professor who referred to bass as the “saber-tooth tiger” of the 21st century.

According to Latona, while a 10-12-inch bass can survive eating little bluegill fry and other small forage, they are not going to grow a lot by doing that.  That means they will “stunt” in the 10-14-inch size range.

“It’s kind of like having a bowl of rice sitting at the end of your driveway.  You have to walk down there and eat one piece of rice and then walk back to the top of the driveway and then, walk down again and eat a piece of rice, again and again and again,” Latona said.  “You might survive doing that but you are not going to flourish.”

Latona explained that once a pond gets into the bass and predator crowded phase it is all about an inadequate food supply and it just snowballs downhill and you have to start to consider how to fix an overstocked pond.

“Crowded ponds and lakes are characterized by small skinny bass, and typically lots of eight to nine-inch bluegill.  The reality is that a 10 or 12-inch bass can’t even can’t get its mouth around an eight-inch bluegill, so they’re forced to eat what they can get their mouth around, which is the tiny stuff. There’s just not a lot of intermediate size forage available.

“And it gets worse and just perpetuates because there’s so many small bass. Bluegill are spawning and doing their job but before they get a chance to grow to that important intermediate size to three, four or five inches long where those 12-inch bass can actually nutritionally benefit from them, they all get eaten, because there’s so many small bass,” Latona explained. 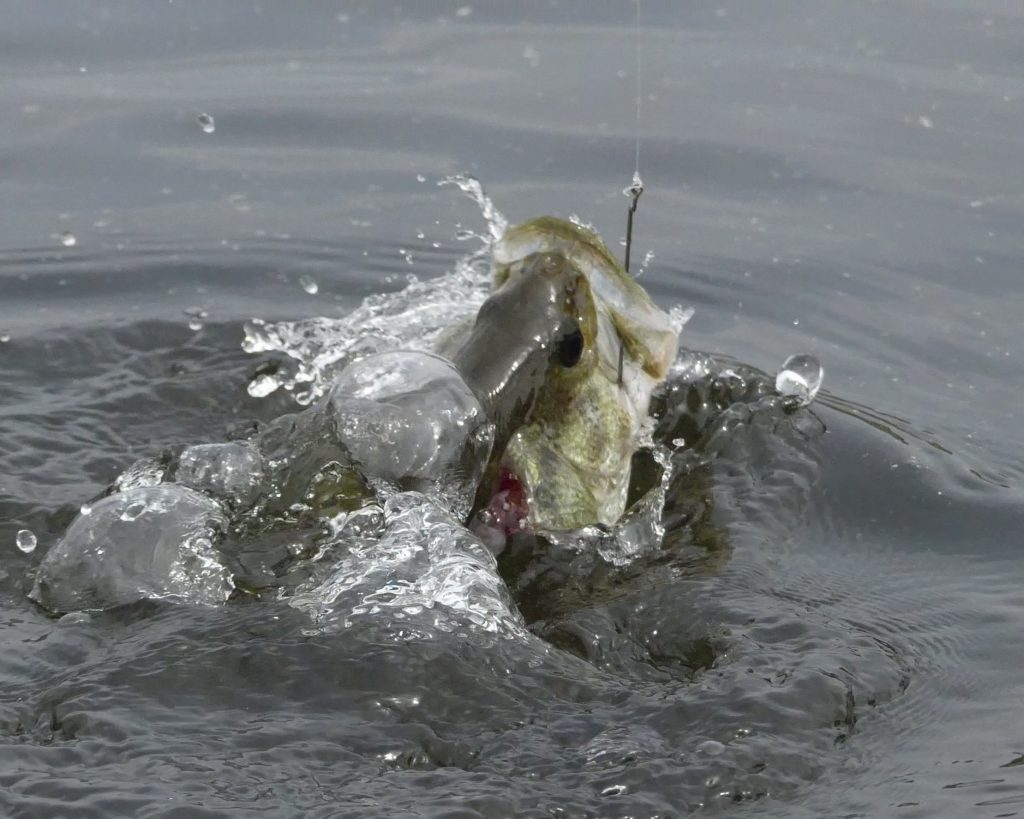 Latona said that ironically, he finds that a lot of over-populated bass pond owners worry that if they add more forage, as in threadfin shad or bluegill, with so much food available for the bass to eat, that they won’t be able to catch any fish.  After all, with all of the edible natural bait swimming around, why would any self-respecting bass strike and artificial lure or baited hook.   What they fail to consider is that bass are cold-blooded and plentiful “table fare” makes for more aggressive, bigger fish and better fishing.

“The opposite is actually true, because bass are cold blooded and the more abundant the food, the more frequently they feed and, the less abundant the food source, the less they feed,” Latona said. “A bass that is in an environment where there is very limited forage is content to hunker down in a brush pile or hang by a stump and sit there for hours, days or longer waiting for something to swim in front of them.  They are not going to utilize energy chasing around food.”

“Largemouth bass don’t care about your bass pond management, don’t know that they’re supposed to weigh five pounds when they are five years old, and they are happy to eat what is available and they conserve energy,” Latona added.

On the other hand…

“Whereas you put bass in a lake that’s full of food with a really dynamic forage base, they’re feeding all the time. They feed more aggressively, they’re more apt to bite your lure or bait and we see that time and time again. Also, bass in lakes with plenty of food are easier to catch. So, it’s a win-win.”

The solution to the problem of having too many small and undernourished bass resulting in no big fish is simply to “break the chain” and “cull the school”.  In other words, when considering how to fix an overstocked pond you have to get rid of surplus fish and make the pond more competitive based on its carrying capacity. 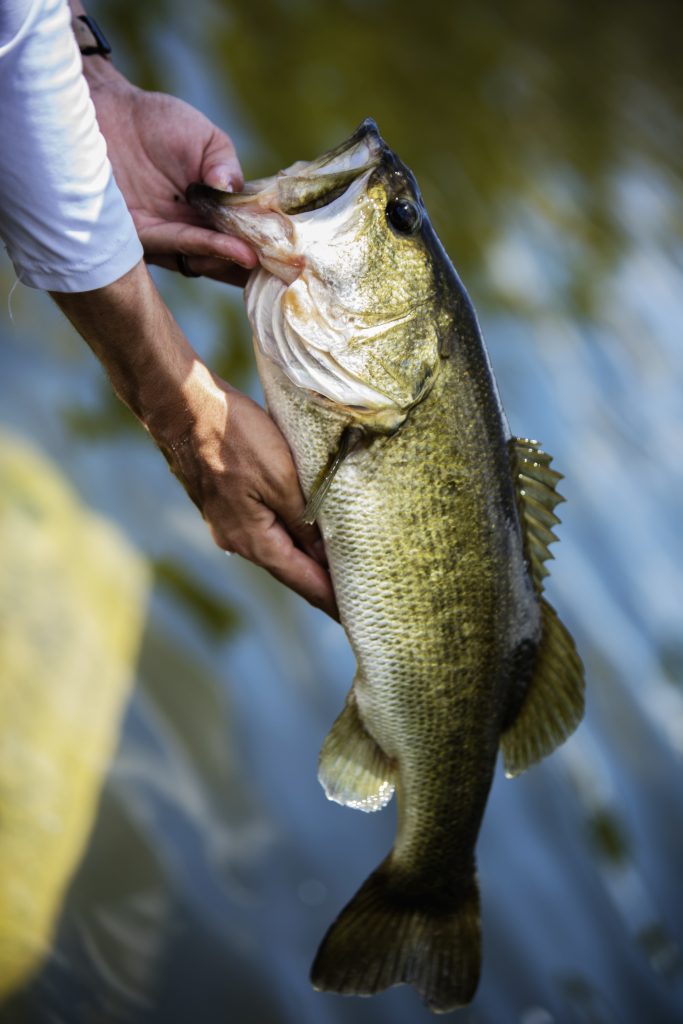 Proper bass pond management will have you catching good size bass and not have you dealing with too many small bass in your pond.

“You’ve got to break that chain, and remove a bunch of small bass and then the forage population will begin to flourish,” Latona said.  “You may have to remove 30 to 40 pounds of bass per acre to keep them in balance and it can be a daunting challenge.  If you’ve got a 20 – 30-acre lake, that can approach 1,000 pounds of bass a year.”

Depending on the size of your pond, that can amount to a lot of fish. While hook and line fishing can help alleviate your stunted bass problem, you will need to spend a lot of fishing hours on the lake to make a sizable dent in the bass population. When considering how to fix an overstocked pond, another down-side of using hook and line to reduce the bass population is that the fish you catch may actually be the fish you want to keep.

“We’ve got a rule on the lake I fish all the time. If we catch you on the top water plugs, I don’t care how big you are you get released back in the lake because I want those fish who bite top water plugs in the water,” Latona said.

Luckily, if you are thinking about how to fix an overstocked pond, Southeastern Pond Management has an interesting, alternative technique for to help with bass pond management. Electrofishing.

“We utilize electrofishing and we can be very selective. It doesn’t hurt the fish. It just stuns them and we can pick and choose which fish we take out.  So, in that respect, it’s probably even a better approach than hook and line and the process doesn’t damage any fish that we don’t want to remove,” Latona explained. “Electrofishing doesn’t really discriminate when used for bass pond management; it removes fish, not just the aggressive fish, not just the fish that don’t tend to be aggressive, we just select based on size.  Obviously, we don’t take the seven to nine-pound fish, since these are the ones we are trying to produce.”

“We tend to look at harvest in terms of how many pounds per hour we can remove from a target range,” Latona said.

“Depending on the season, we can remove upwards of 75 or sometimes even more pounds of fish per hour using our electrofishing technique.  Depending on the size of your pond, if we do that a couple of times over the course of the year, you would be close to your harvest quota and be achieving your goal of proper bass pond management.”

When it comes to the best time of the year to “fix” your small bass pond management issue, Latona noted that spring is the most productive time of the year for electrofishing simply because the fish are in shallower water.  In the summertime they go in the late afternoons or evening when it is cooler.

“In the springtime, as the water is warming and the bass are in the shallows, it’s certainly easier to utilize the electrofishing shock and it’s more efficient in terms of the number of pounds that we can roll up,” Latona said.

Brian Senn
Brian Senn is the CEO and founder of YUDU Outdoors social media platform. He is also a Land Agent for National Land Reality focusing on timber and recreational properties through the state of Alabama. Brian is married to his beautiful wife Brenda and together they have like “all” the kids legally allowed in most states.