By and large, when it comes to December, fishing takes a back seat to hunting and the holiday season.  The water temperature is dropping and that means that your pond bass won’t be as aggressively feeding.  They, like humans, could be considered “off for the holidays”.  While pond fishing most likely won’t be in the forefront of your December activity list, it is the perfect time to take steps to improve your ponds health for better spring angling.  Pond liming is one of the best management tools to use in December.

“December is a fantastic time to lime,” says Norman Latona, president of Southeastern Pond Management.  “It isn’t interrupting your fertilization program and you don’t run as great a risk of stimulating nuisance aquatic plant growth. We do a lot of liming in November through February once the water temperature drops down into the 60-degree level or below.”

SE Pond offers services that cover the waterfront of pond development and management including ecosystem analysis, management programs, pond construction, liming, fertilizing, fish inventory assessment, removal processes, stocking of forage and game fish, maintenance and more. They cover the Southeast and do projects in other areas such as Illinois and as far west as Arkansas and Texas. 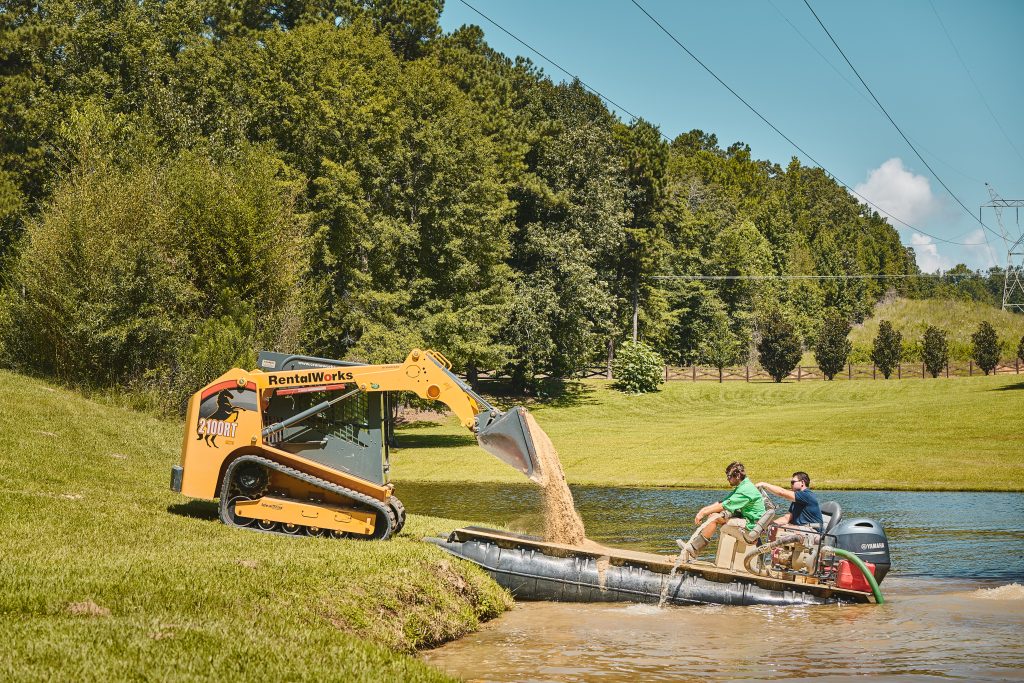 Liming is an important foundational principle of good pond management and is one of the cornerstone management inputs.

What Is Liming A Fish Pond

Latona noted that the concept of liming a pond is basically the same as liming crop fields or food plots for deer.  The only difference is that liming on ground has the goal of changing the alkalinity and pH on the surface soil and in the case of liming a pond, that soil (most of the time in the form of mud)  is underneath the water on the bottom.

When you lime a pond you apply lime to the surface. As it “rains” down to the acidic bottom soil it neutralizes the acidity, increases the hardness and stabilizes the pH, and the result is a bottom that is more conducive to uptake the nutrients to the organic fertilizer that can be applied to grow plankton.  With the proper water alkalinity and pH the fertilizer will release into the water better and it is taken in by the planktonic algae that gives the pond that desirable green color that is called a bloom and why liming is essential in fish culture.

“Liming is an important foundational principle of good pond management and is one of the cornerstone management inputs, and if you’re not liming and fertilizing your pond you’re really not managing it,” Latona pointed out.

“It’s not the most glamorous stuff to do you know you don’t see anything happening instantly.  It’s not like adding fish or putting in food and watching the fish come up and eat or even spraying for weeds where you see the stuff die over a short period of time.  You don’t really notice it but believe me that has a huge impact on the water chemistry which ultimately is what fish production is tied to.” 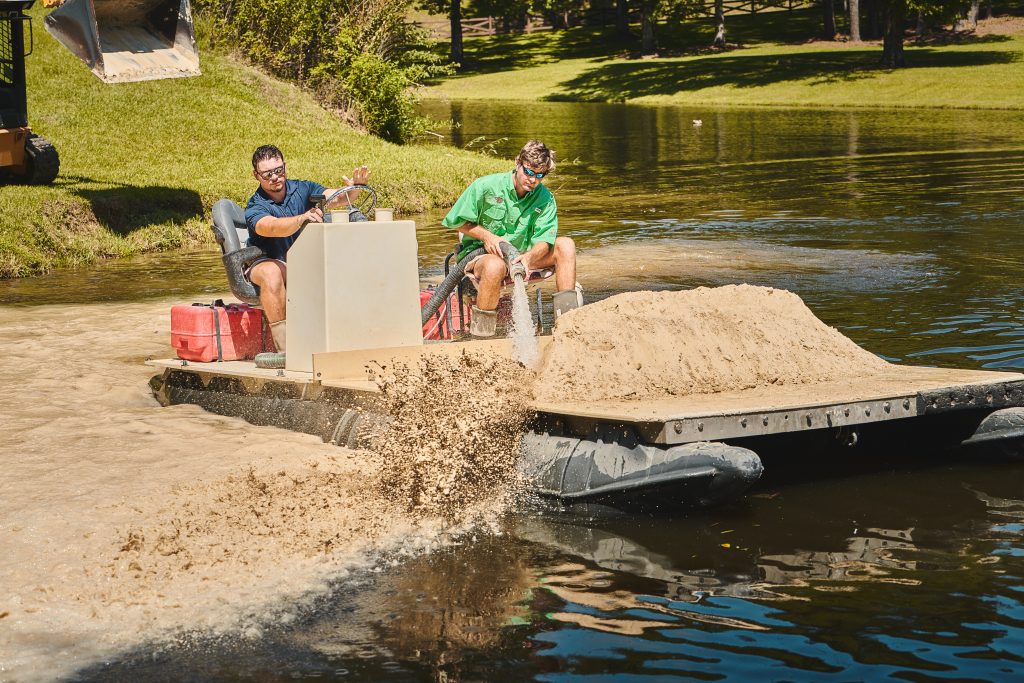 SEPond has developed a specialized boat (lime barge) that is capable of holding a ton or so a load.

Latona stressed that while fertilizing without liming isn’t a completely wasted effort there is a massive difference in results.  Using fertilizer exclusively can produce an ideal plankton bloom but they are what is called  “flash blooms’ ‘ and just as quickly as they come, they are gone and you have to keep pouring more and more fertilizer in.  With adequate liming and healthy alkalinity, the bloom tends to stay.

“You still have to add fertilizer periodically because you will get flow through but if you maintain that level the result is much more consistent and reliable results,” Latona noted.  “Ultimately what it’s doing is when there’s more plankton in the water, over a longer period of time, there’s more food for the little zooplankton which are the little tiny insects and animals that feed on the phytoplankton.

“Then there’s more zooplankton for the bream and the forage fish to eat and so they grow faster and they reproduce more. Because of the liming the bass will have more forage to eat so it’s that old food chain. And liming is not only a link in the food chain, it’s like the first link in the chain and a chain is only as strong as its weakest link.”

Depending on rate application which may range from four to even eight tons of lime per acre, In order to distribute the lime evenly in a pond, SEPond has developed a specialized boat (lime barge) that is capable of holding a ton or so a load. The outboard motor powered barge has a trash pump that creates a lot of water pressure and as it is driven around the crew knocks the lime off of the deck with a hose and the lime just rains down and settles on the bottom.

“I’ve seen a lake that had a dam rupture not long after we limed and it looked like it had a dusting of snow on the bottom of the lake,” Latona shared.

Latona has found that most ponds and lakes in the southeast need about a ton of lime per acre to maintain an alkalinity of the desired threshold of about 20 parts per million of calcium carbonate and SEPond continuously tests to make sure everything is in sync. Since liming is such a labor-intensive process and somewhat messy, instead of liming every year they will distribute more tonnage per acre so that each application will last four to five years. 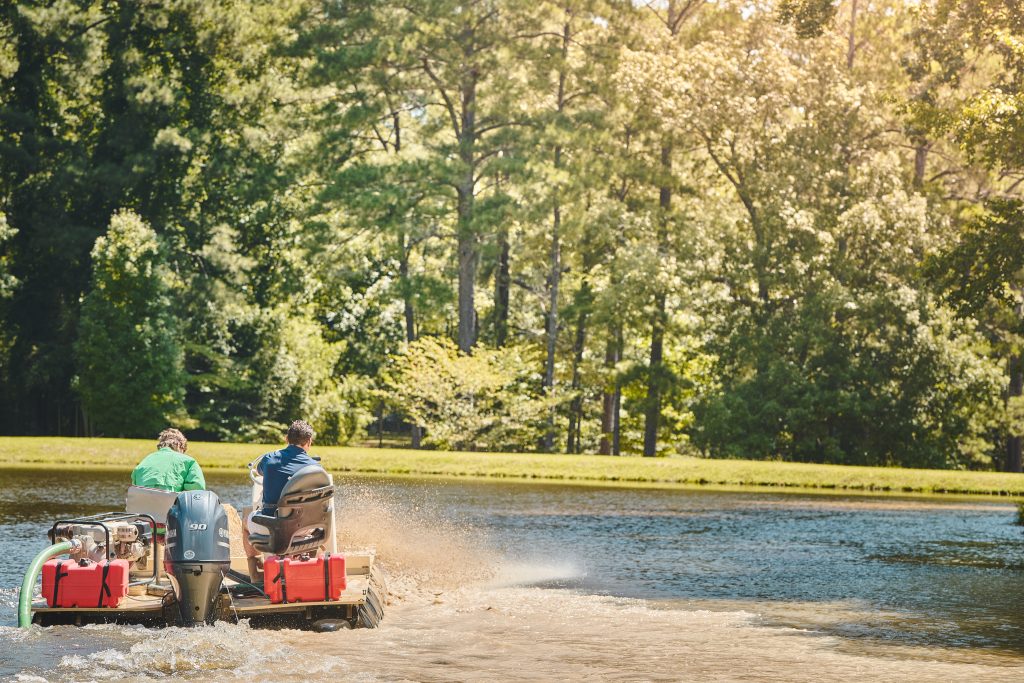 Crushing the lime allows for it to be spread further and absorbed more into the soil at the bottom of your pond.

One of the common misconceptions about lime applications is that you can just dump some lime in the pond in selected spots and that is that.  The reality is even if the lime is finely ground, if you just put it in various sections of a pond, at the mouth of a creek that flows into the pond or even around the pond edge, while it will dissolve over time the effects won’t permeate the whole pond.

The fact is that lime is just crushed limestone and that is rock. While water can dissolve pretty much anything over time it is not going to dissolve rock quickly enough to effectively change the water chemistry when it is randomly placed.

In order to get the maximum effect, fine lime has to be distributed across the whole pond so that it evenly coats the bottom of the lake. Doing it like this is one of the best ways of liming a fish pond.

“You could dump a load of pebble sized limestone in one spot in a lake and 10 years later 90% of that pebble limestone is going to be still sitting there,” Latona observed. “With the right rock, properly applied liming can have a dramatic effect on water quality, improve the aesthetics of the water and result in healthier and better water for fish production.