As president of Southeastern Pond Management Noman Latona has pretty much seen and heard it all when it comes to pond management FAQs.

On a recent GDO Alabama Freshwater Fishing podcast we were able to ask Latona a couple of the most common questions sent to us by listeners.

Why are all the bass in my pond small?

Latona pointed out that if it is a new pond that is only one or two years old, the bass are small because they are not very mature.  On the other hand, if it is an established pond that has been around for a while, the reason is most likely that the pond is “predator crowded”.

In other words, there are too many hungry fish and not enough or not big enough food for them to all eat to grow.  They have exceeded the “carrying capacity” of the pond to grow large fish.

“What happens is that every year the bass spawn and multiply and a new crop of bass comes out and this just adds to the overall number.  They grow fairly well until they are six, eight or up to10 inches in size,” Latona explained.  “Typically, these ponds are full of bluegill and they spawn like crazy, every 30 days or so and they supply an ample supply of fry for the bass to eat until they transition to a size where they need larger forage to continue to grow.”

The reality is that in predator crowded lakes the bass, which are voracious feeders, eat all the big stuff and then are forced to eat the little fish which doesn’t really do much to stimulate growth so the fish adapt to a leaner environment.

“The bass don’t know that they are supposed to weigh two pounds when they are about a year old or five pounds at two or three years,” Latona said.  They adapt to whatever conditions are present in terms of foraging.” 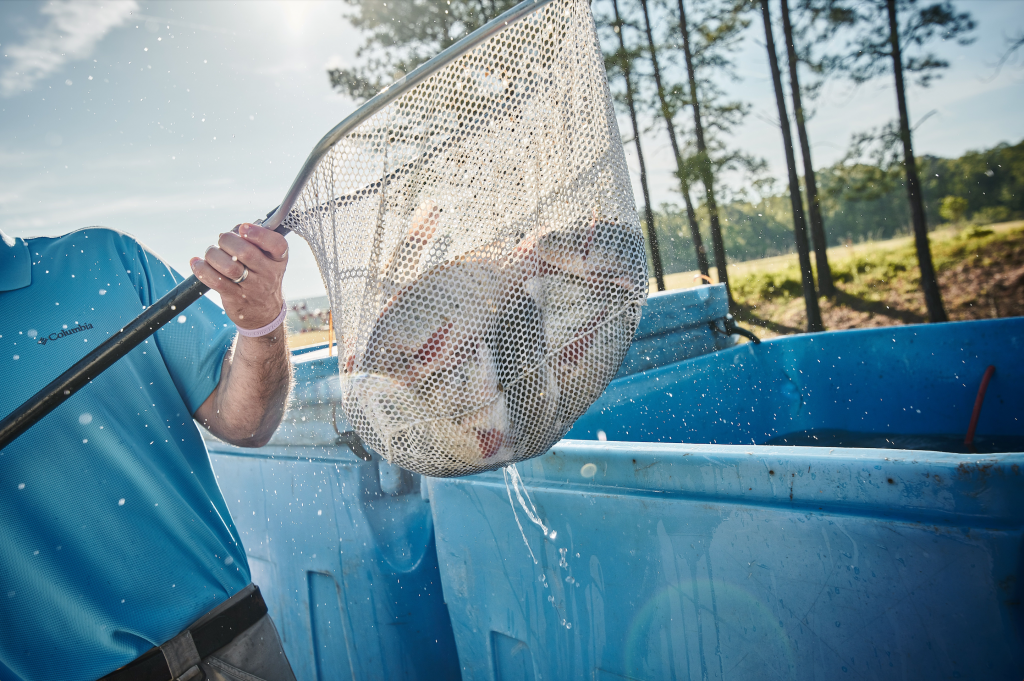 As a pond owner, it is a great idea to get in touch with experts to answer any questions you may have.

Bass respond to this scenario by becoming semi dormant.  They will seek out the coolest, quietest water where they can duck under cover and just wait for something to swim in front of their mouths.  They are not actively searching for food since it is inefficient and a waste of energy.

So, it seems logical to think that if these fish are in a “starvation/survival mode” but are hungry why don’t they hit every bait or lure you throw out to them?  You would think they would attack anything that resembles a decent meal.

According to Latona, when bass adapt to an environment with a limited amount of food they have changed and adapted their behavior.  They might not eat much of anything for days or even weeks and just shut down to a point and that makes catching fish in predator crowded lakes actually harder than in a balanced pond, even though there are more fish.

Even if there are forage fish in the pond, that forage needs to be of a size that will provide the nutrition to help grow a respectable bass.  While bluegill fry may be wonderful for two- or three-inch bass, it is like popcorn for larger fish and just isn’t worth the time or effort and certainly isn’t going to sustain any sort of real growth rate.

Latona said it is the same as if you put a bowl or rice at the end of your driveway and then run down from the garage to the bowl of rice and eat one grain and then run back to your garage.  If you keep repeating that you are just wearing yourself out and certainly not beefing up.

“They are not putting their mouth on something that benefits them beyond the energy it took to catch it,” Latona said.

One of Latona’s key indicators of a “predator crowded” pond is the presence of a ton of fry and a lot of eight- and nine-inch bluegills but nothing in between.  That is critical because the three-to-five-inch bluegills will do the 12–14-inch bass the most good.  The larger bluegill are pretty much “predator proof” since it takes a fairly big bass to swallow an 8-inch bluegill.

The answer to the stunted bass problem is simply to increase the amount of forage but the solution is twofold.

The first step is to decrease the number of predators.  In other words, remove 30, 40 and even 50 pounds or more of bass per acre per year.  The second step is to add intermediate size forage fish in the three-to-five-inch range that will most benefit the stunted 12–14-inch bass.  Doing one doesn’t work very well without the other.

“Corrective or supplemental stocking of forage is critically important but the harvest side is equally as important,” Latona said.  “If we start adding forage alone and we don’t do anything about the overcrowding, we’re going to be right back in the same boat and it is a losing proposition.”

Latona feels that it is best to target the crowded segment of the bass population which is typically in the 10 to 13 and maybe, depending on the pond, up to 14 inches.  When you couple the removal of fish with the introduction of suitable forage is where you will see dramatic results.

What is the best way to harvest excess bass?

The most obvious answer is to catch them by hook and line. That sounds well and good but unless you want to open up your pond for a bunch of fishermen, maybe hold a fishing tournament or two or devote a lot of time trying to catch them, taking out 40,50, 60 or even 70 pounds an acre annually is a daunting task.

“There’s a little bit of a concern when you start harvesting with hook and line and you’re keeping everything you catch which may be the most aggressive fish, the ones that bite artificial lures and the ones you don’t want to eliminate,” Latona said.  “Hook and line harvesting can be effective but it has to be done consistently.” 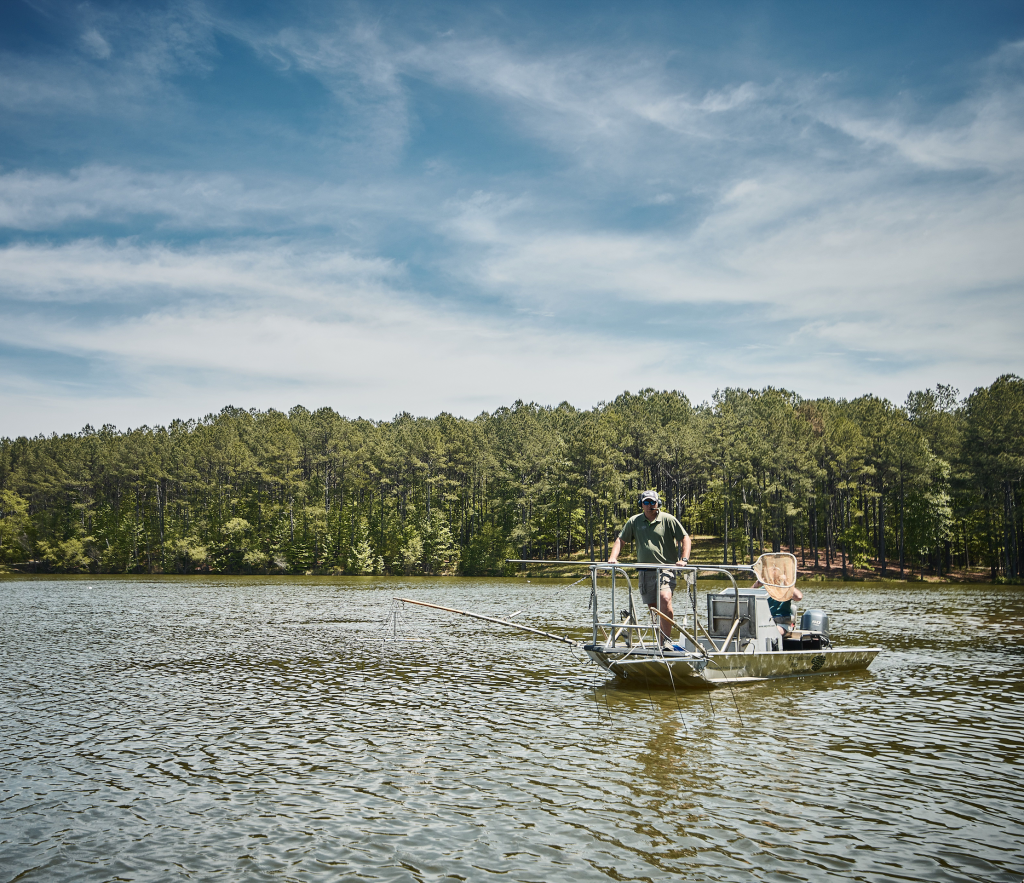 Electrofishing is a unique way to help with managing the fish in your pond.

The answer is electrofishing.

Electrofishing basically stuns the fish and then they can be collected for tagging, measurement, research and even harvesting.  The process doesn’t permanently harm the fish and allows you to keep the fish in your target range and release the others.  It enables you to get a “profile” of your pond and identify the forage base, the predators and is a tool that you can use for your pond management and grow bigger and healthier bass if that is your goal.

I caught a nine-pound bass in my lake, how old is it?

Latona said that there are a number of factors that come into play when it comes to age analysis and it is very difficult to guess how old a fish is without knowing a lot of detail about the fish populations, age, nutrition and genetics.

“Bass are capable of growing at a rate of three pounds a year but that is optimal and kind of perfect foraging scenario,” Latona said.  “It isn’t unusual to see bass grow at about a pound a year in balanced ponds but the only way to know for sure, other than knowing when the pond was stocked is to age the fish and unfortunately, you have to kill it to do it.”

Bass have a little bone in the inner ear called an “otolith” which is a calcium carbonate structure that can be dissected and ground down and, when put under a dissecting scope, shows rings that can be counted much like rings to count the age of a tree.