It is pretty much a given that most pond owners love to stock fish.  Fish pond stocking is one of those things that many people see as a “silver bullet” or “magic pill”: to solve all pond issues.  “Just give them more to eat and all will be fine” is the concept.  Unfortunately, that really isn’t the case.

Successful pond stocking is very much a step-by-step scenario.  The timing, quantities and species that are stocked are all very important and the predator-prey metrics all affect the balance of the pond and the angling quality.

Norman Latona is owner of Southeastern Pond Management and has been helping pond owners in the Southeast get more production and enjoyment out of their ponds for over 30 years.

Latona says that there is a right and wrong way to successfully stock ponds and it is very much a process with identified steps.  Those steps are basically the same for both a new and an established pond except that there are a few more wrinkles when it comes to stocking established ponds.

Make Sure the Pond is Fish Free

The one step common to both new and established ponds is that the pond needs to be fish free.  It should be noted that in the southeast the dominant predator fish is the largemouth bass and while bluegills, shellcrackers and even crappie create their own angling opportunities, most of the forage fish are in place to supply bass with food. 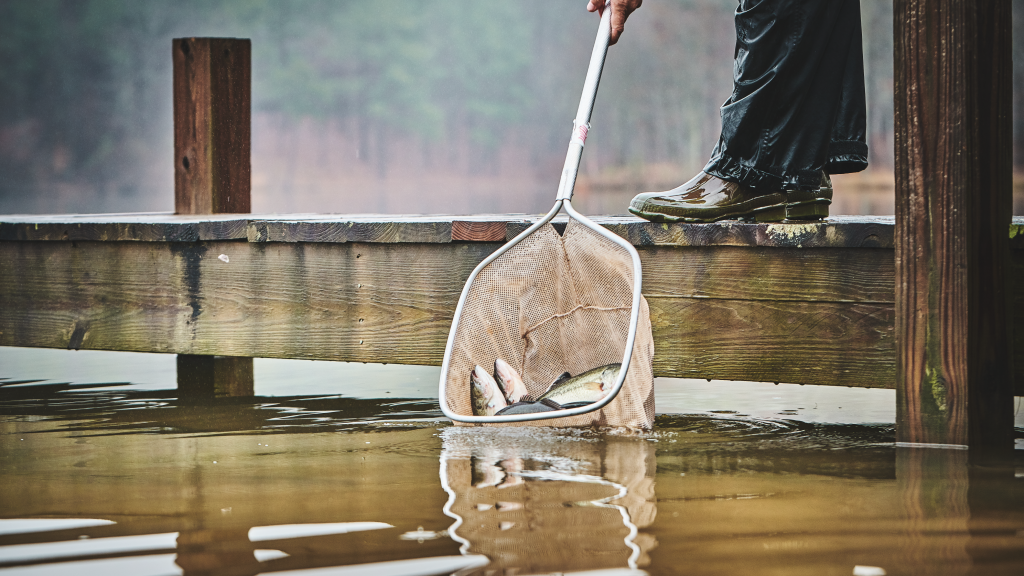 Properly stocking your pond with largemouth bass is the ultimate goal in the fish pond stocking process.

“There is no better opportunity to get the fish community established than start with a clean slate and build a fishery that is sustainable and dynamic,” Latona said.  “There is a definite recipe that we want to follow.”

Latona explained that to rid the pond of its fish he will use a seine net, electrofishing or utilize Rotenone, which is a chemical that quickly suffocates the fish.  The chemical detoxifies in the water very rapidly in a matter of days or maybe even a week or two depending on how quickly the pond is filling.

What and When to Stock

According to Latona, forage fish are stocked before one bass hits the water.  Those include bluegill, shellcracker, threadfin shad, golden shiners, flathead minnows and this normally happens in the later fall all the way to early spring.  The actual timing is dependent on when the pond has enough water to make stocking feasible.

“A lot of these lakes are built or renovated in the summertime and they fill up in the fall and winter and typically we stock them in late winter and early spring to get that forage base established,” Latona said.  “We are going to let that forage swim around predator free and eat, and grow and reproduce and then wake up, do it again all the way until the summertime, maybe as late as June and then we may think about stocking some bass fingerlings.” 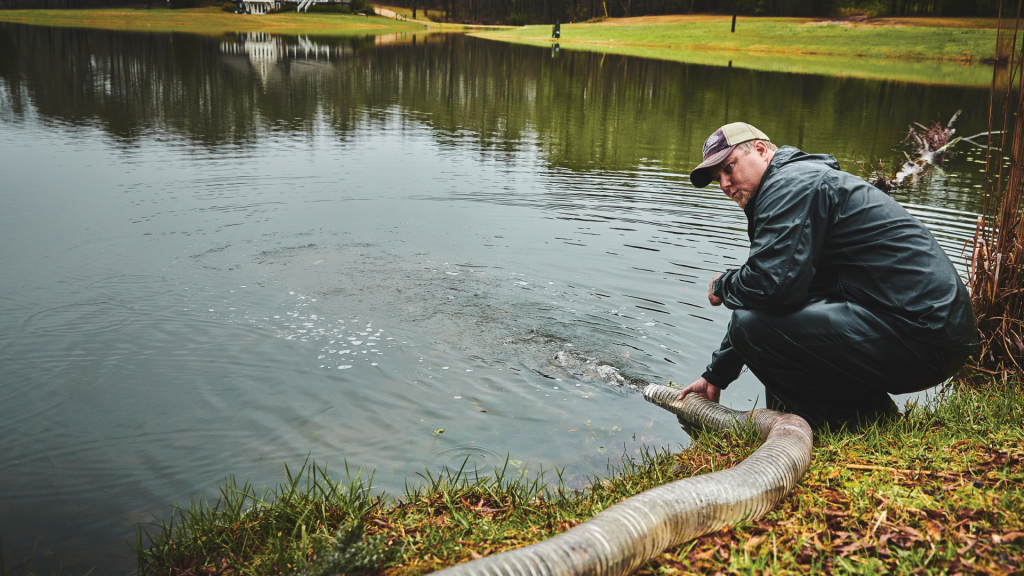 You have to create the proper ration of forage fish to predator fish, when you are stocking your fishing pond.

One of the ways Latona hedges his spawning bets is to stock fathead minnows which don’t get very big but spawn early, as in February and March, which means chances are good these have spawned before bass are introduced.

In terms of stocking ratios of forage to bass it really all depends on the objectives of the pond owner.  Latona has found that in well foraged ponds bass will grow quickly and the result is a predator crowded lake and stunted bass because the food source has been greatly and quickly reduced.  So SEPond started stocking more threadfin shad, fathead minnows and bluegills (because they spawn pretty much continuously) and started to manipulate the diversity of the species and the ratios.  They would even reduce the bass stockings to get things into sync.

“When we have customers who say they want a trophy bass pond we will stock 40 to 50 and maybe even more forage fish to one bass.  We might stock several thousand forage to 50 bass per acre,’ Latona explained.  “The idea is to make sure that not only today but 6 to 12 months from now there will still be plenty for the bass to eat.”

“Once the predators are in the pond it is much more challenging,’ Latona added.  You have to start stocking adult bluegill because if you stock fingerling bluegill they will get gobbled up so quickly it does almost no good.  You have to stock adult threadfin shad and it becomes a more expensive proposition.”

Latona advises that for an established pond which is predator crowded, aside from eliminating all fish, you need to reduce the predator count and adding more forage without a reduction in bass is an expensive act of futility.  The key is to get a balance between forage and bass.

Bluegill comprise the main-stay of the forage base in most ponds throughout the country.

“It will break your wallet to try to overwhelm a pond with food. You can back up a semi-truck every month full of forage and those bass say ‘thank you very much’ and then just gobble them all up,” Latona said.  “We have to take some of the mouths out of the herd and thin down the predators.  When you do those things in concert is when you will see results as in larger and more healthier bass.”

How Many and How to Remove Bass

Latona points out that removing 40, 50 or even 75 pounds of bass per acre is not unheard of in order to get the pond in forage/predator balance.

Fishing is the first remedy that comes to mind but that equates to a lot of angling effort and hours with not much gain.  You can have a bunch of fisherman out there for a few days and catch some fish but it will be quite a challenge for them to haul in that much poundage unless it is a constant endeavor. For example, let’s say you have a pond with stunted bass in the 12-inch range,  each weighing half or three quarters of a pound.  To remove the minimum of 40 pounds you need to catch between 80 and 50 fish per acre.

A more efficient way (but more expensive) of removing surplus predators is electrofishing where direct electricity flows between electrodes, one of which is an anode in the water. Fish are involuntarily drawn toward the anode and are stunned.  They can be scooped up and the unwanted fish are harvested while the others are returned to the water unharmed.

“When I’m fishing and catch a bass on a topwater bait, I always throw it back because that is the kind of aggressive fish that will hit an artificial bait and it is exactly what I want to keep.  The great thing about electrofishing is that it is indiscriminate so it doesn’t just take the aggressive fish and removing predators by electrofishing takes much less time than hook and line fishing,” Latona concluded.