In addition to food, largemouth bass need cover and structure to provide protection and give them the hiding place from which they can ambush bait fish and grow into big fish. Part of that structure equation is aquatic vegetation. The problem with aquatic vegetation is that sometimes it can just get out of hand and take over. When that happens, you need to begin thinking about pond weed control services, companies, products, and aquatic weed control in ponds.

On a recent GDO Alabama Freshwater Fishing Report podcast, Southeastern Pond Management president Norman Latona shared his expertise in how to manage your pond for aquatic vegetation, which you can listen to below, or read on for a synopsis. Suffice to say, if a pond weed control service near you is only recommending herbicides, you need to get a second opinion.

Latona pointed out that since the south has a long growing season, sometimes aquatic vegetation can literally take over and it can be challenging to control it.  The question is, “how much vegetation is too much”?

“There are a number of strategies that pond weed control companies can put in place to control unwanted and over excessive vegetation and it just isn’t about hammering them with chemicals,” Latona said.

While chemicals have their place in the pond management arsenal, there are other more organic ways to control a pond’s vegetation inventory. Latona pointed out that most of aquatic nuisance plants have their origins in the mud in the bottom of the pond and need sunlight to develop and grow.  By coloring the water and limiting the amount of sunlight that penetrates down into the water column to the mud, that alone inhibits aquatic weed growth. 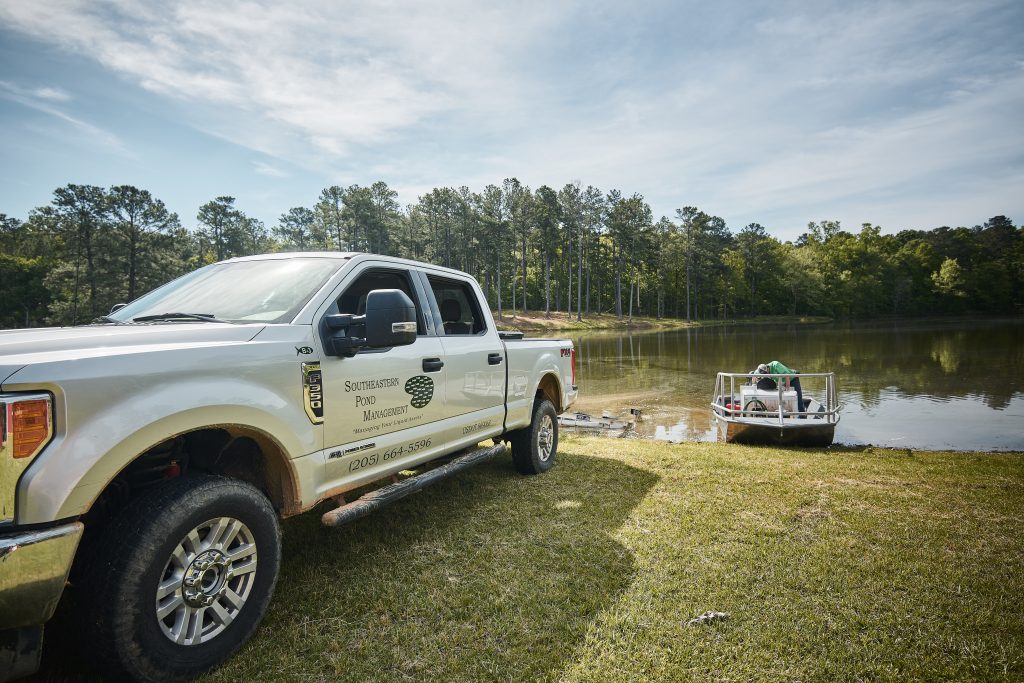 Controlling the weeds in your pond is a big part of a successful pond management plan and can have you asking yourself about pond weed control companies “near me.”

While on the surface, it sounds nonsensical and rather contradictory, applying sound pond management techniques such as liming and fertilizing to support algae growth, can cut down on unwanted aquatic growth and contribute to a healthy, productive and balanced pond.

“When you talk liming and fertilizing to control vegetation, it sounds kind of counterintuitive in that you would think that if you fertilize you will grow more weeds,” Latona said.  “But what we are attempting to do is grow planktonic algae in the water that will give a pond that green tint, reduce sunlight penetration and stop weed growth.”

Latona said that while it sounds crazy to talk about pond weed control products like lime, fertilizer and weed killers in January, it makes sense to start down the path of weed control early and emphasizes that air and water temperature doesn’t really have an effect on weed growth.  He emphasized that pond owners need to realize that once this type of vegetation gets established it becomes very difficult to control so the key is to start early.

“Folks get kind of confused and think that if the water temperature is 45 or 50 degrees that weed growth isn’t a factor and that just isn’t the case.  It’s just like with trees in that it doesn’t matter what the temperature is, it is all about the number of hours of sunlight,” Latona said.

“Weeds will begin to grow in the spring, as the day length and sunlight intensity increases, regardless of air and water temperature. Once that vegetation gets to a certain level of maturity and abundance, you are really fighting an uphill battle to control it.”

For example, from a biological and fisherman’s perspective, there isn’t much of a drawback to vegetation as long as it doesn’t get to the point where it chokes the pond and inhibits the ability of the predators to effectively prey on forage fish and obstruct the ability of fisherman to fish it.

“Bass love vegetation to hide them as predators and so do bluegill and, to some extent, shad who use it to hide from the bass.  It is also a tremendous source of food because of all the tiny little aquatic insects that we call zooplankton and the tiny snails and crustaceans,” Latona explained.

“Where we run into problems is when it gets to the point when it impedes the ability to fish, especially for bank fisherman. In addition, heavy weeds may attract snakes, rodents and even semi-aquatic animals like muskrats and beavers to the water’s edge, which some people consider undesirable.”

“Finally, for people who maintain nice, manicured and maintained landscapes around the pond, a preponderance of overgrown weeds may not be very esthetically pleasing,” Latona added.

While Latona emphasized that while pond weed control products like aquatic herbicides are an effective arrow in his pond management quiver, SE Pond prefers to take a multi-faceted approach to the farm pond weed control problem, that not only includes liming, fertilizing, chemical treatment and, especially in shallow lakes, the more natural pond weed control of grass carp.

“Grass carp are not going to completely eradicate aquatic vegetation unless you stock them at a super high density but they are a piece of the puzzle and part of the strategic solution,” Latona said.

Latona said that for the average pond (if there actually is such a thing) stocking grass carp for pond weed control at the rate of 12 to 18 fish per acre is a good rule of thumb. 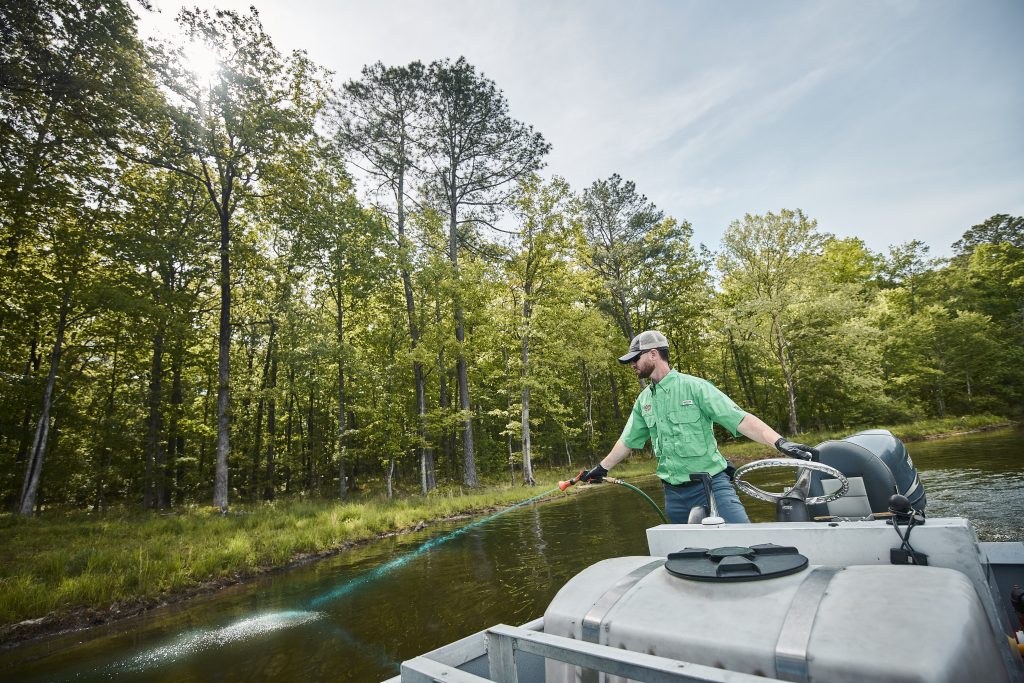 There are many ways to approach pond weed control. A pond management company can help you find the method or methods that work best for your situation.

At the end of the day if liming, fertilizing and the introduction of grass carp just aren’t cutting it, there are always the pond weed control tools of herbicides. In addition, if the pond has the option of drawing down water, the nuisance weeds can be exposed to cold temperatures and that may help do the job.

“We have a handful of approved pond weed control chemicals that, if they are applied properly, are not harmful to humans, pets or wildlife and don’t hurt the fish,” Latona noted.  “We tend to use herbicides more during the heavy growing season, which is the summertime when they are blooming and that is when they can be particularly effective.”

What about water drawdown?

“If we have the ability to control the water level, we can draw down the lake or pond and expose the more susceptible areas with the nuisance weeds to the air and sub-zero temperatures and that can be effective,” Latona said.

According to Latona, when you kill weeds with pond weed control products they decompose and release all of their nutrients, which helps to stimulate planktonic aquatic algae growth which, in turn reduces the need to fertilize to “cloud” up the water to reduce the amount of sunlight reaching the floor (mud) of the pond.  It is like an aquatic compost pile and part of a big interrelated lake and pond weed control management circle.

“So, we herbicide and in a week or so, the pond will be as green as pea soup because of all the dead vegetation that is basically organic fertilizer and ‘boom’, we stimulate a big plankton bloom without even adding any fertilizer,” Latona said.  “We’ve accomplished two things at once.”