The gentlemen waiting for me at the dock on this June morning was a friend of a regular charter client of mine. He seemed a nice enough guy until he told me he not only didn’t want to use live saltwater fishing bait; he didn’t even want any on the boat.

“That’s fine with me, but we’re really going to be at a disadvantage.” was my response. My trepidation was increased as I watched several other anglers leaving the bait shop with live wells full of beautiful shrimp and croakers. The only consolation was that I was saving about 50 dollars on the charter, but I still wanted to catch fish- see, I’m wired that way.

Our first stop was an area called the “shoals” which is a system of shell bars and cuts that run west of the Dauphin Island Bridge. Although condition sensitive, the “shoals” are probably the best 1 square mile of inshore fishing on the Alabama coast. Quality trout are landed with regularity from late March through the Holidays- but mostly on live bait. There were already several boats on the shoals with some already catching fish using live shrimp under popping corks which is the most effective technique there. 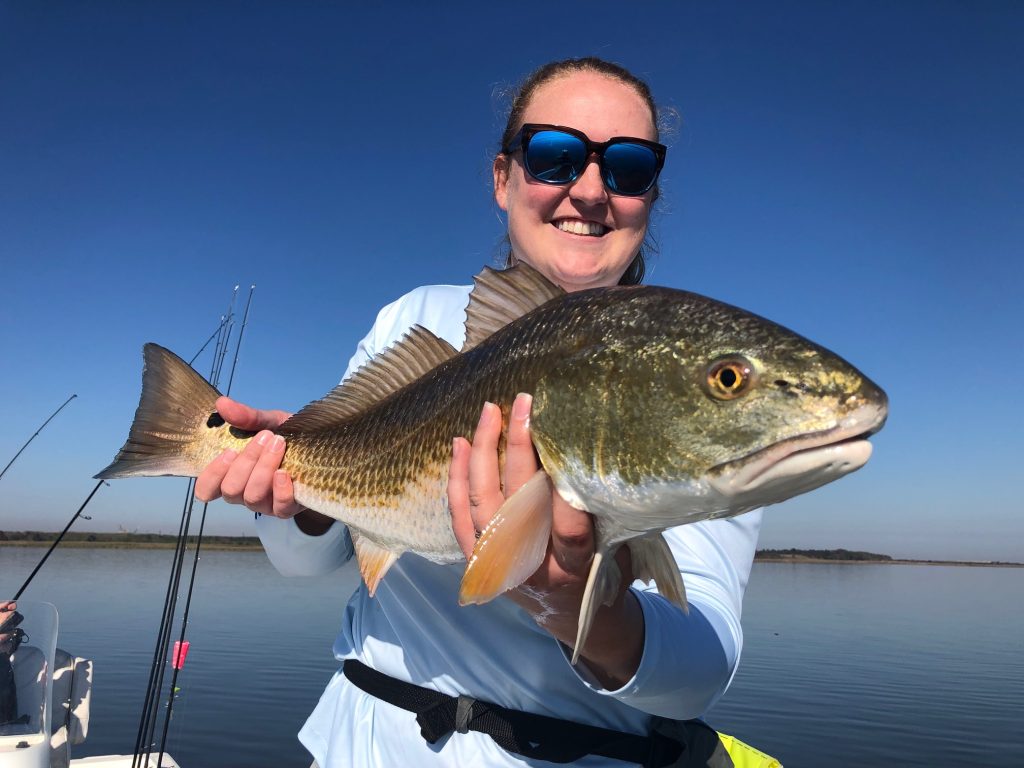 Focusing your artificial bait on the banks is a great way to land redfish.

I started weaving the boat through a trough while we casted a variety of hard saltwater fishing bait like top waters and broken back jerk baits. Our first drift resulted in seven nice trout and a few more blow ups on top. A couple more drifts yielded the same results and when the bite slowed by 9:00ish,  we had landed and released 20 or so fine speckled trout. Based on what I had seen while looking at the other boats, we had done almost as well as the other boats and maybe even a little better in terms of quality.

The next stop was Alabama’s legendary Dixey Bar in hopes of some action on bull reds.  We lucked up and ran into a giant school of bull reds on the surface catching a couple each, me using GULP swimming mullets with my charter catching two on a fly rod. We eased back to the marina late morning and I am sure I was more surprised than he was at how great a day we had just experienced.

It’s always important to be fishing at daybreak when targeting speckled trout, but never more so than during the summer months. One advantage to using artificials is that there is no need to wait for the bait shop to open or wait in line at a bait shop. You can be where you need to be at daybreak. Have the lure you are planning to use tied on (preferably the evening before) this lure almost always being a top water at daylight for me. Of course, top waters are going to be most effective in water depths less than seven feet, so again in the hot months, you’ll want to be fishing early.

If you haven’t had a chance to scout, look for areas that have active bait on the surface as places to start. If you can scout and are planning to fish a beach, put a marker on the beach like a piece of driftwood that can be seen from the boat. Beaches all look the same in the dark and especially from a boat. Whether you are wading or fishing from the boat, set your casts up from upwind to downwind. This will allow for longer casts which will let you get a bite before getting too close to the fish. When you get a bite, stop wading or stop the boat and make multiple casts before moving on. Even big trout are school fish and very often there are several in the area where the bite occurred. 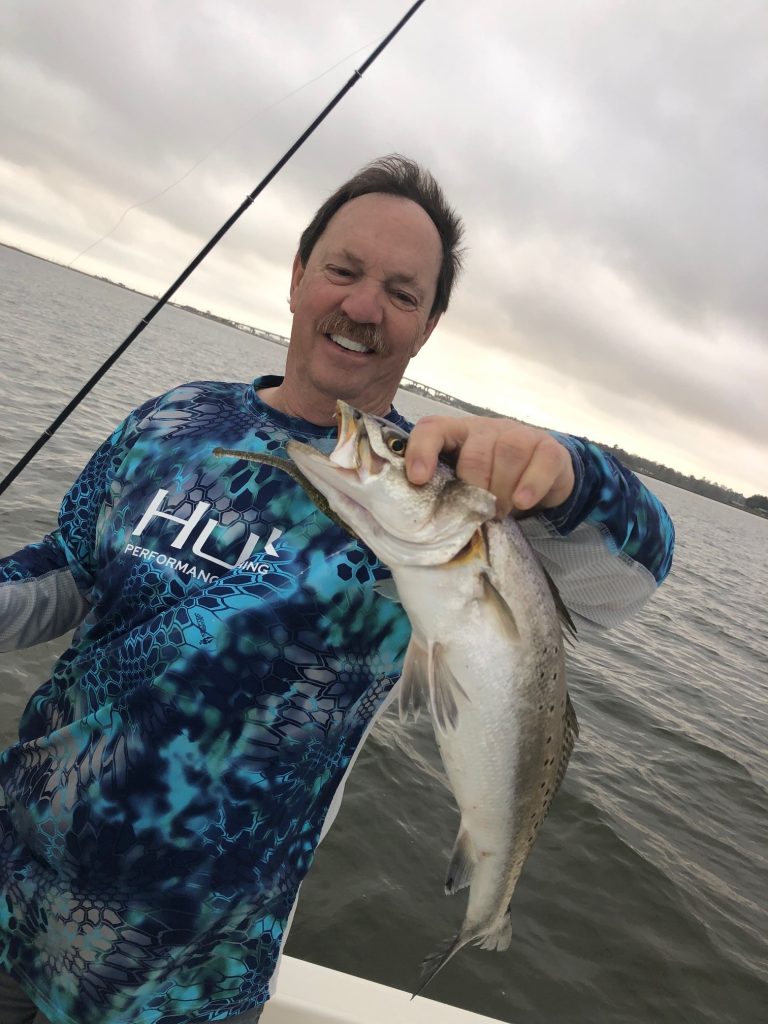 You need to get out early, around daybreak, to have the best chance to land speckled trout.

The fish will let you know when they no longer want it on top, but keep in mind that that doesn’t mean the bite is over. In the same areas that you top water fish, go back over them with a Slick Lure or some other type of fin fish imitation. Besides the fact that the Slick catches the heck out of fish, one functional advantage is that colors can be changed very quickly without the need to re-tie.

Take a look at the water clarity. If it’s stained try the  Slick “Bcat” or “Dirty Ice” colors and if it’s clear try more subtle colors like “Goblin,” “Cool Beans,” or the new “Croaker” colors. The fish will let you know what they want. If I think I am around fish, I make 5-10 casts before changing colors and start over if I get a bite or catch a fish.

Unless it’s cloudy or windy, later in the morning, the shallow bite will slow during the summer. If you’re not ready to go home, another effective year-round technique is to use a shrimp imitation under a popping cork. This is a deadly combination when fished over shell or grass- or under a bird school. My favorite is the Vudu Shrimp in the “Baby” size under a Fairhope Rattle cork. The small Vudu tends to slip down on the hook after a fish or two, so I super glue the lure to the hook and let it set up for at least an hour or so- and usually overnight. This prevents it from slipping for hundreds of fish. I use about two feet of 20# Berkley fluorocarbon leader and 12# Berkley Nanofil main line on a 2000 sized Penn Conflict spinning reel. As with the top waters, try setting your casts up from upwind to downwind while searching for fish. Look for fish slicks or diving gulls and be ready to stop the boat if you get a bite with a Power Pole or other anchoring device.

Don’t forget about other species during the summer either. Redfish, white trout, flounder are all game fish that can be found in the same areas as the speckled trout. For all of these there is no better saltwater fishing bait than GULP. The aforementioned fish use their sense of smell as much or more than their eyesight. GULP literally dissolves in the water releasing a tremendous amount of bite-stimulating scent.

For reds and flounder, I like to “beat the banks” with a four inch GULP swimming mullet rigged jig head on a spinner harness. Focus on banks that have grass and/or shell that also have features in the form of points and drains. Slow rolling the spinner will get the attention of the predatory fish and the GULP seals the deal. This technique is so productive that I use this it even if I have bait when I have to catch a red or flounder. 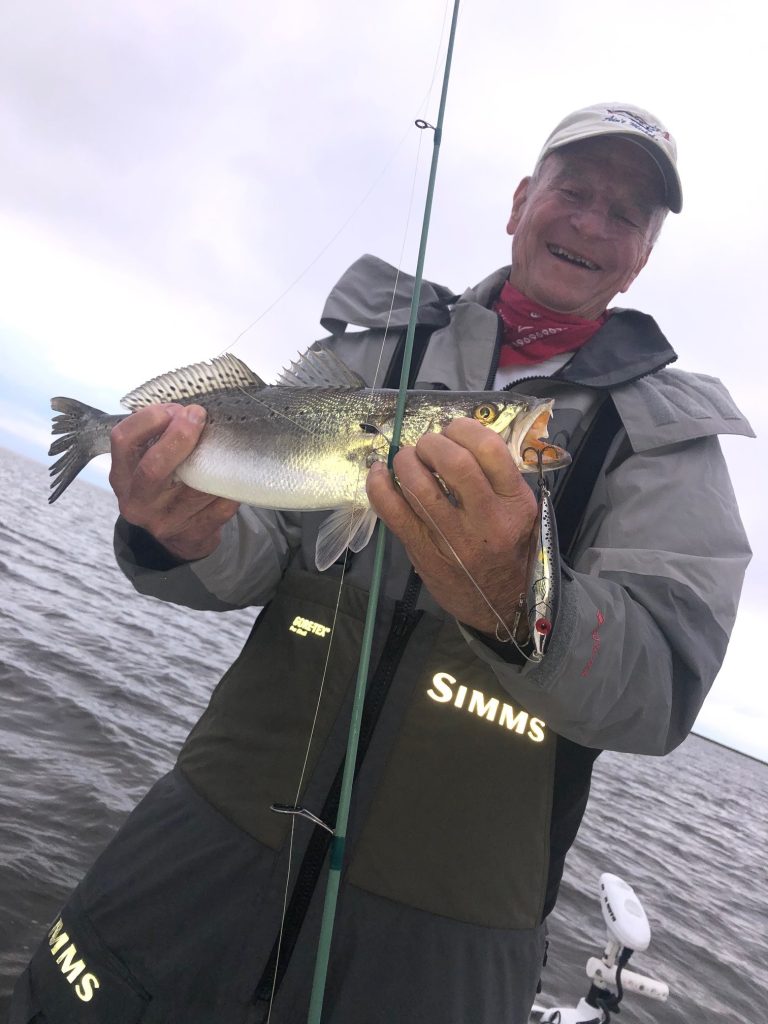 Artificial bait is a great choice when fishing for specks in the summer.

White trout gather in huge numbers on structure in the Bay or Sound during the summer. Here again, I use GULP on a jig head even if I have live bait. There is so much competition in these massive schools that you’d burn through your life savings in bait if you used it. White trout are almost always willing to bite as well and have saved more than one slow speck trip for me. They will let you know when you are around them as they are very aggressive and will bite usually when the bait gets anywhere near them If you get bit as you work around structure, figure out how to get set up to make the most effective casts and have some fun.

White trout make fantastic table fare for a fish fry if kept cold and cooked fresh and they’re a staple at the Abruscato household fish fries! Keep in mind that they don’t freeze particularly well, so although there is no size or creel on them, it doesn’t do anyone well to let them go to waste.

So, it’s still great to get live saltwater bait during the summer months if you can, but don’t pass up a summertime fishing trip by hassling over getting bait or not getting bait at all. There is still plenty of opportunity to have a great trip when using artificial fishing bait for saltwater!