It’s a big ocean out there. And as many beginning offshore skippers soon discover, finding pelagic fish in all that blue water sometimes makes locating that elusive needle in the haystack look simple. There are only so many hours in a fishing day and it takes lots of time and fuel just running out to the likely areas, before the search for fish even begins. Tools that can cut the search time and the fuel use are a huge advantage. Reading chlorophyll charts, SST water temp charts, and SST maps can all be utilized to put you on those pelagic fish and maximize your, actual, fishing time.

Fortunately, these days there are some technological assets that can help to pinpoint daily hotspots and make the learning curve a lot easier to navigate. Among the best is Hilton’s RealTime Navigator, developed some 15 years ago by Texas angler Thomas Hilton and now, after many advances and enhancements, has made it a favorite electronic tool for hundreds of offshore skippers in coastal waters around the U.S. 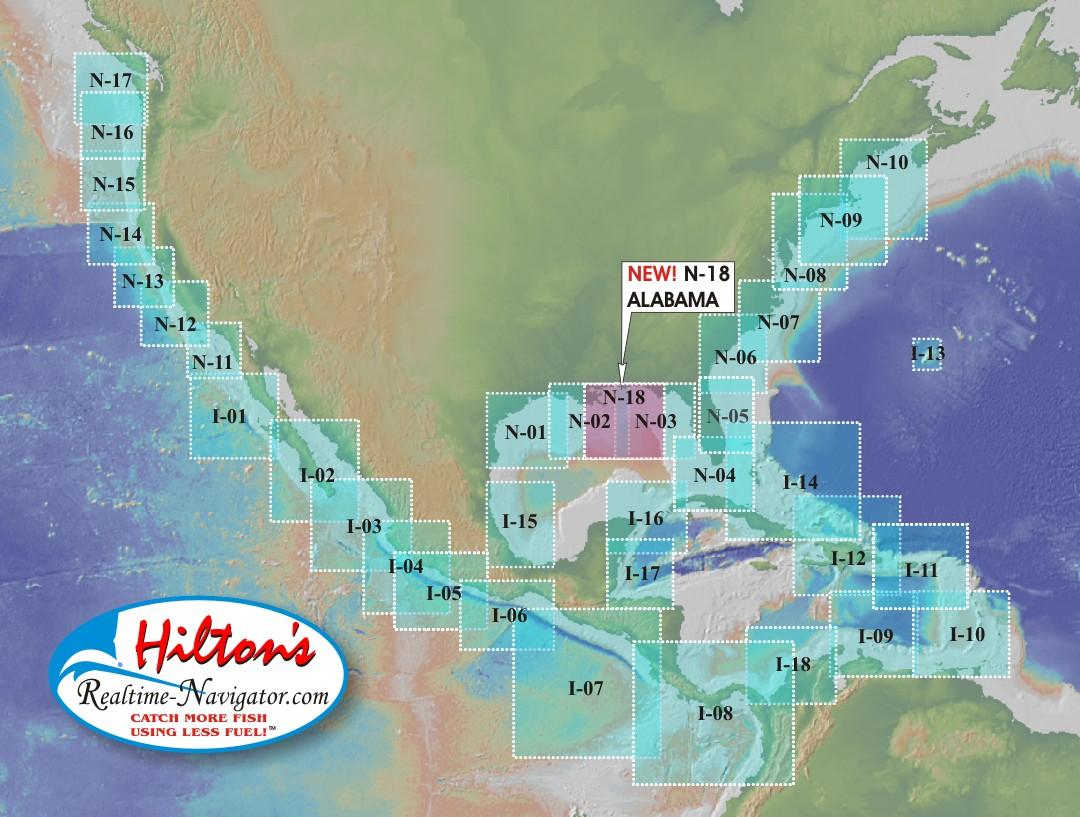 Hilton’s RealTime Navigator system is a valuable weapon in any angler’s arsenal.

Hilton says his system breaks information down into what might be called the “Four Z’s”, allowing anglers to analyze, customize, utilize and realize factors affecting their success in finding and catching pelagic fish. Those factors include sea surface temperature (SST), chlorophyll charts, current breaks and altimetry, which measures the relative height of the sea surface.  Altimetry provides an indication of downwelling and upwellings. Upwellings brings food to the surface from the inky depths, beginning with the base of the food chain that progresses from algae and zooplankton to baitfish and ultimately to the largest of bluewater gamefish.

The Hilton RealTime Navigator program allows anglers to monitor and analyze offshore waters in the days prior to planned trips via a website that can be viewed on computer, tablet or smartphone at home or on the boat. This allows watching SST charts and maps, looking for SST lines, and reading chlorophyll charts for the build ups and changes that are likely to affect bait and gamefish movement during the fishing trip. A newly added data stream provides hourly sea surface temperature monitoring, in addition to the longer-term trends. The program also allows an instant look at real-time conditions from all the offshore weather buoys. This provides insight into actual conditions in terms of wind and wave height and current speed and direction rather than the speculative weather forecasts that sometimes lead boaters into tough conditions. Just move the cursor to the buoy, click on it and you’ve got instant information.

The Hilton RealTime Navigator system also makes it possible for anglers to zero in on specific attributes they’re interested in and make them pop out for easy navigation and review. Optional colors make clear at a glance, when reading the chlorophyll charts, where optimal temperature breaks are forming, and temperature breaks mean differences in current, rip formation and likely gatherings of big game fish. High-resolution satellite shots of chlorophyll, and the relative water clarity resulting, can be viewed in three- or seven-day increments.  These increments can be animated which clearly shows what’s out there now, and what anglers are likely to face on their fishing days.

Current direction and strength are clearly shown on this graphic, which also indicates where there are likely to be rips and weedlines forming due to currents of different speeds meeting.

The RealTime Navigator program also allows the skipper to see the boat’s position relative to all of the different parameters allowing him to put the whole picture together and run to locations exactly where the varying conditions give the best odds of success. Reading chlorophyll charts and SST water temp charts or maps also makes it easy to create routes, waypoints and bearings to allow for easy navigation to a particular chlorophyll color change or SST temperature break. It’s also easy to mark locations where fish are caught or seen, and to make screen shots for future reference.

In the final analysis, it’s all about putting pelagic fish in the boat, and the Hilton RealTime Navigator system makes it far easier to make the best use of available time and boat range to get to the fish fast and to stay on them all day long, realizing success. In a single day of fishing offshore, anglers can easily save far more on fuel than the cost of a subscription. They’re no longer wandering around the blue hoping to luck into a good spot—instead, they can utilize SST water temp charts or maps, chlorophyll charts, or altimetry charts to navigate directly to the locations that give the best chance of success with pelagic fish.  In tournament fishing, this can mean a huge payday. In charterboat fishing it can mean happy clients who will come back repeatedly. And for weekend warriors, it means more angling action, less frustration and lower fuel costs.

Hilton launched in May of 2004 covering three regions in the northern Gulf of Mexico.  The success of the concept has rapidly grown and now they offer 36 regions covering not only the Gulf but also the Atlantic Coast and the Pacific Coast.

Contrary to logic, upwellings are the slight depressions in the sea surface, measured by satellites overhead, where the water is pushing to the surface from the deepest parts of the ocean or gulf bottom, bringing nutrients with it. Upwelling currents bring nutrients from the deep up to the surface where they interact with sunlight, creating the beginning of the food chain that ultimately results in populations of pelagic fish, which are natural targets for anglers. There are also “downwellings”, which again counter-intuitively, are slightly higher than the surrounding sea surface area, have few nutrients, little bait, and consequently few gamefish.

The relative height of the sea surface can indicate upwellings, which are areas where nutrients from the depth are brought to the surface, forming the base of the food chain that ultimately results on big game fish.

Putting it All Together

The multiple levels of information available through Hilton’s system makes it possible to seek out zones where a number of fish-attracting factors come together, increasing the odds of success.When viewing SST water temp charts and maps, an area that has a sharp temperature break, an abrupt change from opaque green water to crystal-blue-purple clear, strong currents and an upwelling is a high-percentage area to troll, while those areas lacking one or more of these features may be less desirable.

Areas where there are well-defined color changes, from the high-chlorophyll fertile waters to clear blue deeper offshore waters, are often gamefish highways.

Of course, finding a big offshore oil rig like the many in the Gulf of Mexico can make a day successful, even if it has fewer of these factors since these structures attract bait which attracts gamefish, including blue marlin. Hilton’s can also help you with these semi-submersibles and drillships in the Gulf. They currently track around 50 of these each week as they move, giving anglers the latest intel on the position of these structures.

Many pro skippers, including those who specialize in big money billfish tournaments like Captain Johnny Dorland of Orange Beach, rely heavily on Hilton’s services.

“I use it every time I leave the dock,” Dorland said. “It saves so much time because it lets me know right where I need to start fishing to put the baits where those pelagic fish are most likely to be.” 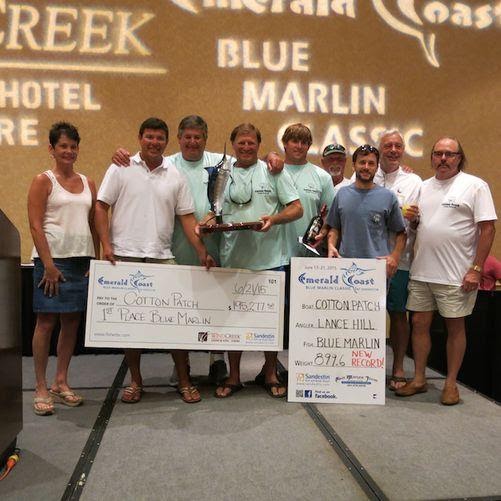 Captain Johnny Dorland of the Cotton Patch is noted for guiding his team to giant billfish, including tournament winners like the 899.6 pounder that won the Emerald Coast Blue Marlin Classic in 2015.

Dorland says he particularly leans on Hilton’s in tournaments.

“In a tournament, every minute you save can be critical.  By reading chlorophyll charts and SST maps, you’re spending your time in high probability areas instead of cruising around looking for those areas and that is saying nothing about the fuel you save by going direct to your most likely spots on any given day.”

Dorland said he’s been using the service for over a dozen years.

“The other thing I like is that Tom Hilton is a really helpful individual, always ready to explain a new feature or a technical detail.  It’s just a good system, all around.”

Captain Mike Canino, who is based in Galveston Texas, regularly fishes throughout the waters off Central America.  He says that Hilton’s RealTime Navigator is a huge help when visiting waters where you’ve not fished recently.

“Instead of starting from zero, you know the zones where there are most likely to be bait and fish straight off, so you’re not wasting your owner’s time fishing 50 miles from the hotspots,” Canino said. “I also like it that Tom is so helpful when we need a bit of advice, because he’s such a whiz at figuring out where the conditions are going to be best and he’s always willing to share that information.”

The learning curve for using the Hilton RealTime Navigator system is short for most anglers.

Simply choose the location you like best for your coming trip and click “Save Map” while on the dock and within cell range, and that image is saved to your account to the Hilton server.  You can save as many charts as you wish. Then, open up the RT-NAV app on your smart device and click “Refresh” and the app will download the saved charts into your smart device. It will then say “Ready For Navigation”, click “Navigate” and head for your chosen areas. The iPad 4G or iPhone 4G have their own satellite GPS system to navigate by so you don’t need to worry about staying in cell range. Now pick which imagery you want to navigate upon(e.g. reading chlorophyll charts, SST water temp charts or maps).  It’s just like looking at the website; same exact images, same waypoints, same icons…except now you are an icon. Create waypoints, routes to temp breaks/color changes and compare your vessel’s position to all of the different parameters while out there on the water. It gives you the whole picture of what is happening.

If you happen to be one of those of us who are technologically challenged, you can call Thomas himself and get an instant primer. The number is (713) 530-2267. He’ll not only walk you through the basics but also show you how to customize and pinpoint where weedlines, current breaks and other features attractive to fish will likely be located using this imagery.

Pricing for both the National Regions and the International Regions start at $200.00 per year for the first region plus $30.00 for each additional region.