Whirling white puffs of mist rise to meet the sky. Their voyage is short as morning rays of sunlight diffuse their escape. Tiny water bugs make the only ripples on the surface of the dead calm water. In a matter of minutes, the coolness of the new day is but a memory. The weather forecast for the next several weeks is basically the same: warm nights and hot days with only a slight chance of a thunderstorm in the afternoon. Summer is here in the Cotton State and it’s time for some topwater bass fishing using the best shallow water bass lures. 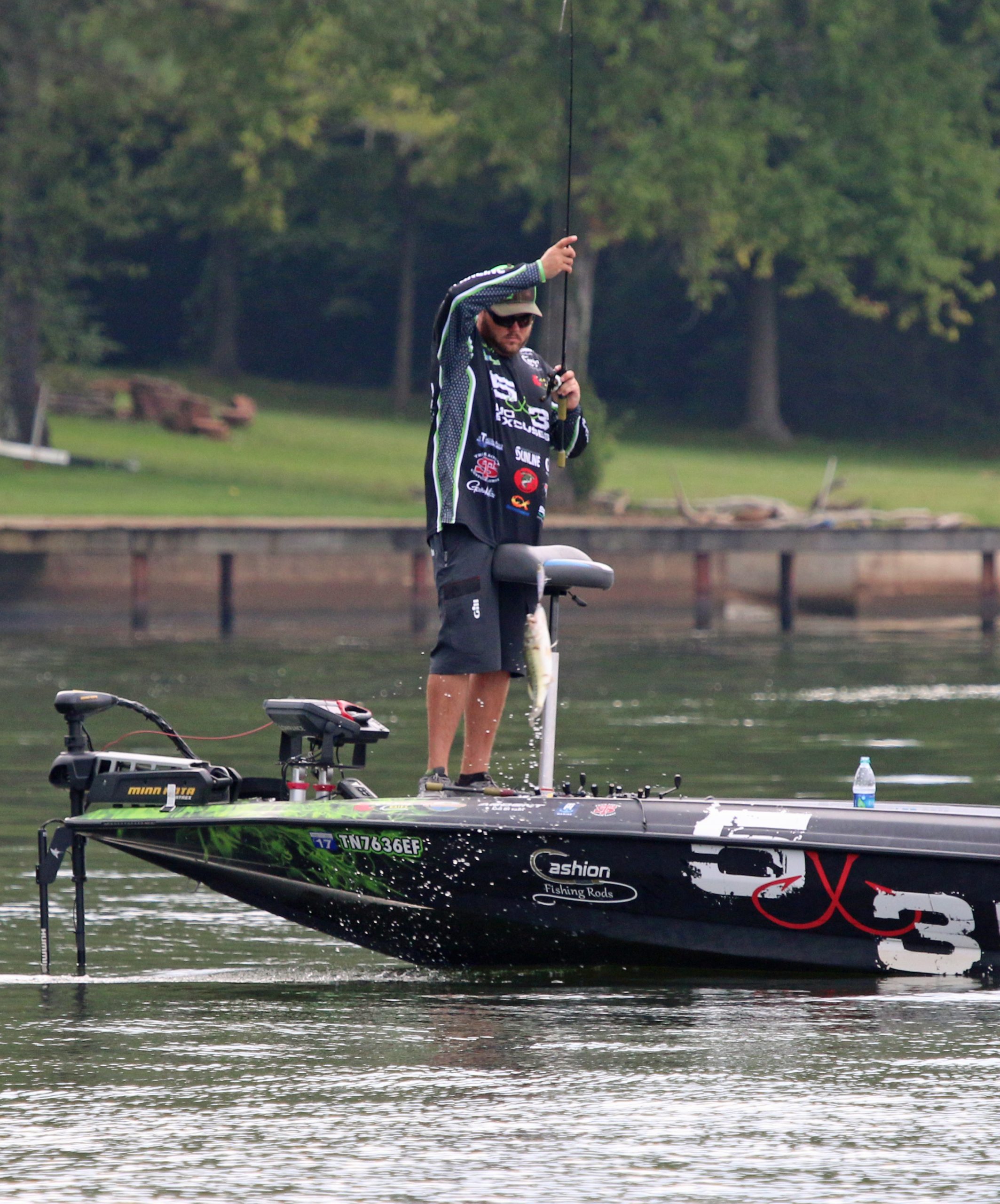 In the back of a small feeder creek, the air is heavy and muggy. It feels like you must tear a hole in it to catch a breath. Thoughts of a soft chair and air conditioning come to mind, but those thoughts vanish quickly as the turbulent action of a bass in pursuit of a shad breaks the silence.

A quick flip with a weightless worm to the remaining rings of the whirl seduces a strike. Raring back on the hookset, the angler sees his quarry in the shallow depths. A stocky, hard-fighting bass breaks the surface again, but is soon in the grasp of the angler. Only moments before the bottom was visible, but now brown-colored pools of mud stain the water.

During the heat of summer, many bass anglers cover the deep water along ledges of river and creek channels in search of summer bass. While their work may not be in vain, savvy anglers are reaping the benefits of good catches of bass in shallow waters.

Going Against the Grain

During practice for the 1996 Bassmaster Classic on Lay Lake southeast of Birmingham, the majority of the competitors felt the tournament would be won by fishing the ledges of the Coosa River impoundment. One professional angler went against conventional thought and opted to fish shallow. This Classic took place during the heat of early August. 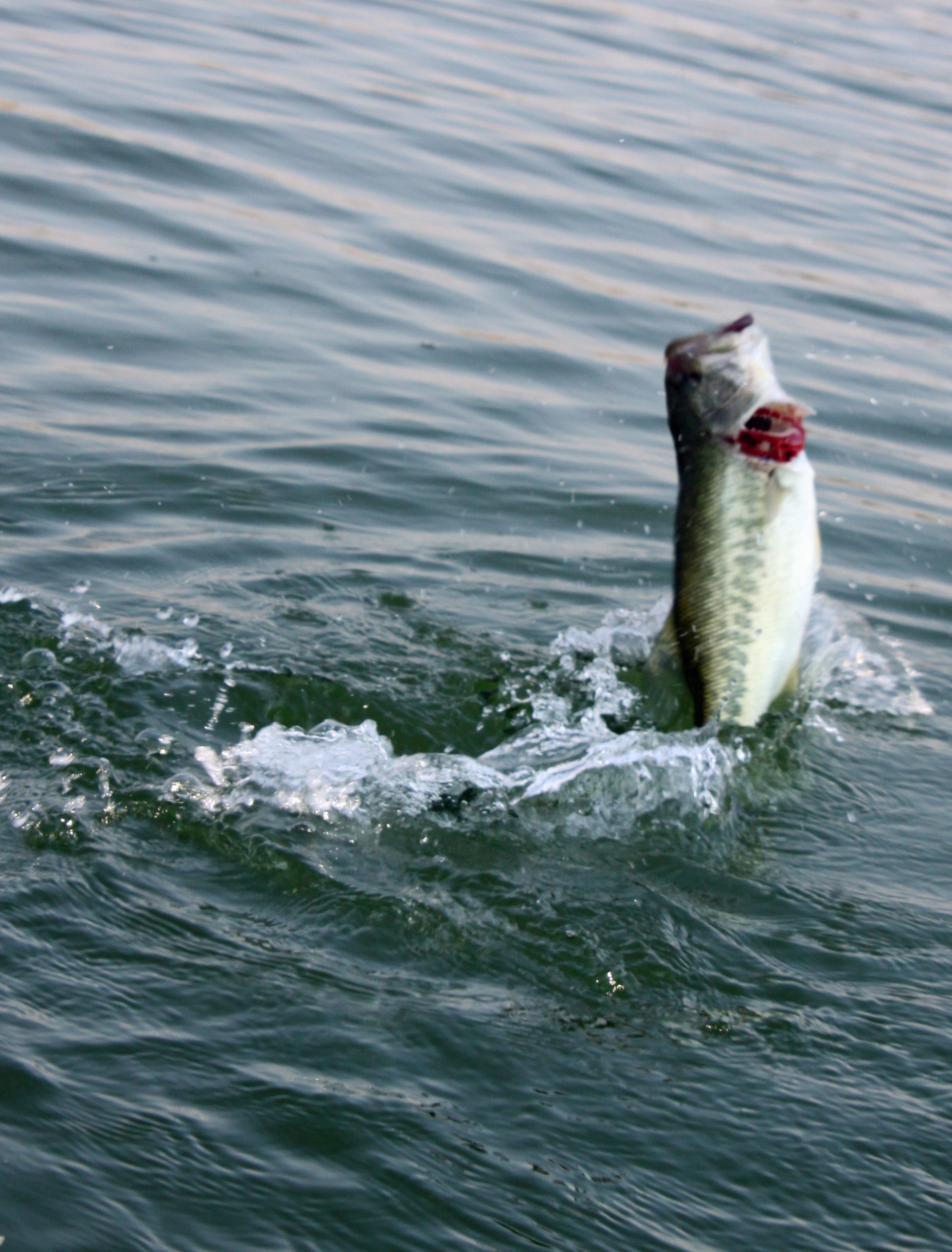 In clear water use a more natural looking bait and make long casts to shallow cover.

“I had located a bay that was shallow and full of stumps,” revealed B.A.S.S. pro angler George Cochran of Arkansas to Bassmaster magazine. “There were fish there, but I didn’t know if they would be big enough to win.”

Now retired from professional tournament angling, Cochran is one of just a handful of anglers who have won both the Classic and the FLW Cup. The most recent championships won by Cochran were in the summer and he fished shallow in both events.

Understanding the biology and habits of bass helped Cochran catch enough bass to win. Over three days in the 1996 Classic, he brought 15 bass to the scales that weighed just over 31 pounds. Cochran beat second place by a pound.

The average depth of the bay where Cochran concentrated was three feet. Some of the stumps were inches below the surface. Some of the other Classic contenders overlooked the potential of this area. They were thinking summer heat and deeper water.

One key to topwater bass fishing in skinny water is finding cover. Stumps, grass, logs and rocks will provide the necessary cover to hold bass during the heat of summer. Throw in a ditch or small creek and the area can be even more attractive to bass. 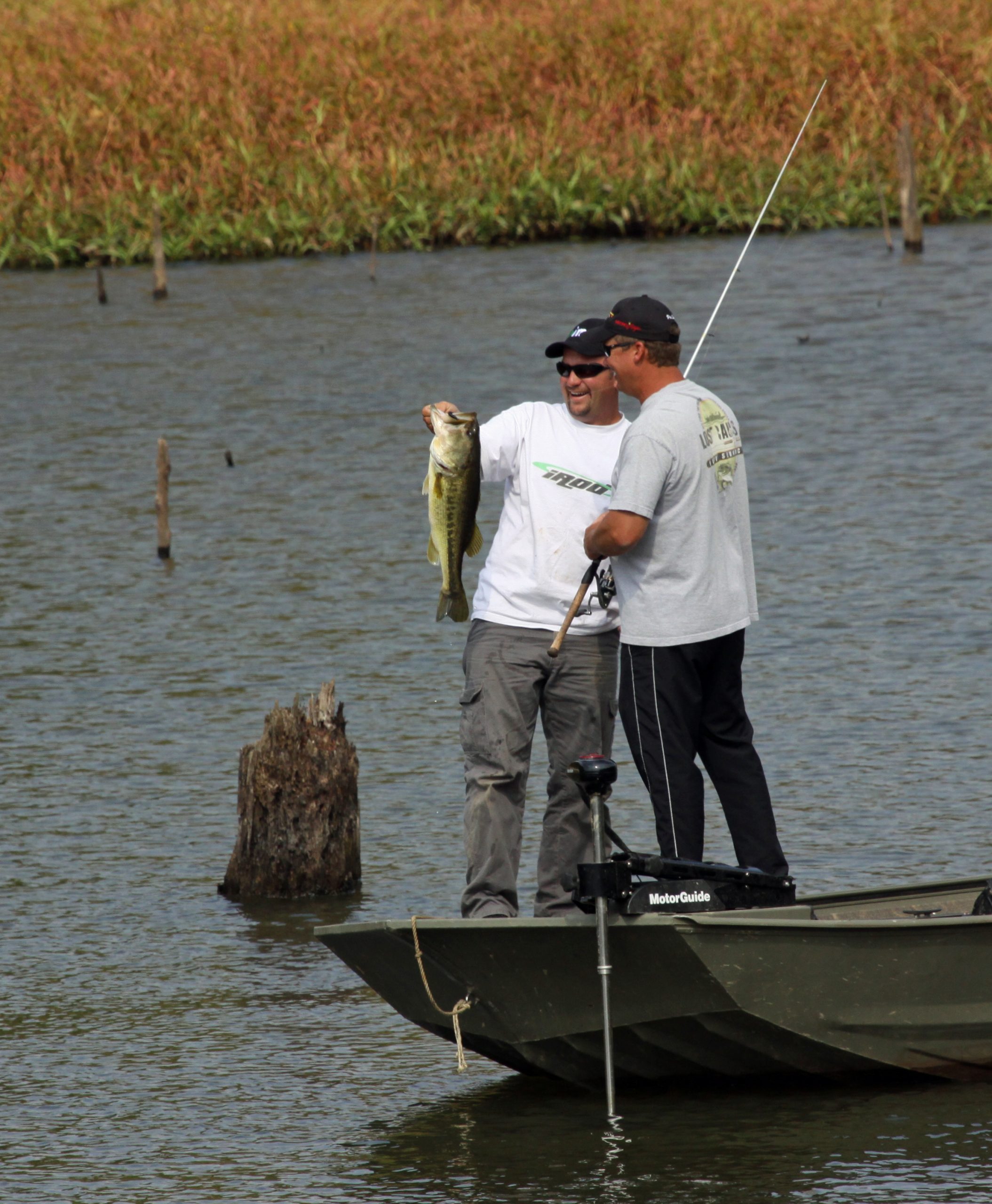 Stumps are prime targets for catching bass in skinny waters.

Sometimes the cover is not visible. Stumps can be hiding beneath the surface. Grass patches too may be growing on the lake bottom, but haven’t pushed to the surface. A change in the makeup of the lake bottom can also hold fish. Careful observation by an angler will be rewarded in dividends of bass.

This past August on Lake Wheeler, FLW Pro Michael Neal of Dayton, Tenn. found a shallow flat with a hard bottom. He found the area during practice for the FLW Cup when he spotted a batch of schooling bass near the shoreline.

“I put my Power Poles down in about three feet of water,” Neal mentioned. “I positioned my boat about two cast lengths from the bank. The fish were less than two feet deep.”

The key to bass holding on Neal’s shallow flat was the harder bottom and the presence of baitfish. During the summer months, shad and other baitfish will frequent the same areas almost every day. With the baitfish present, the bass won’t be far behind. 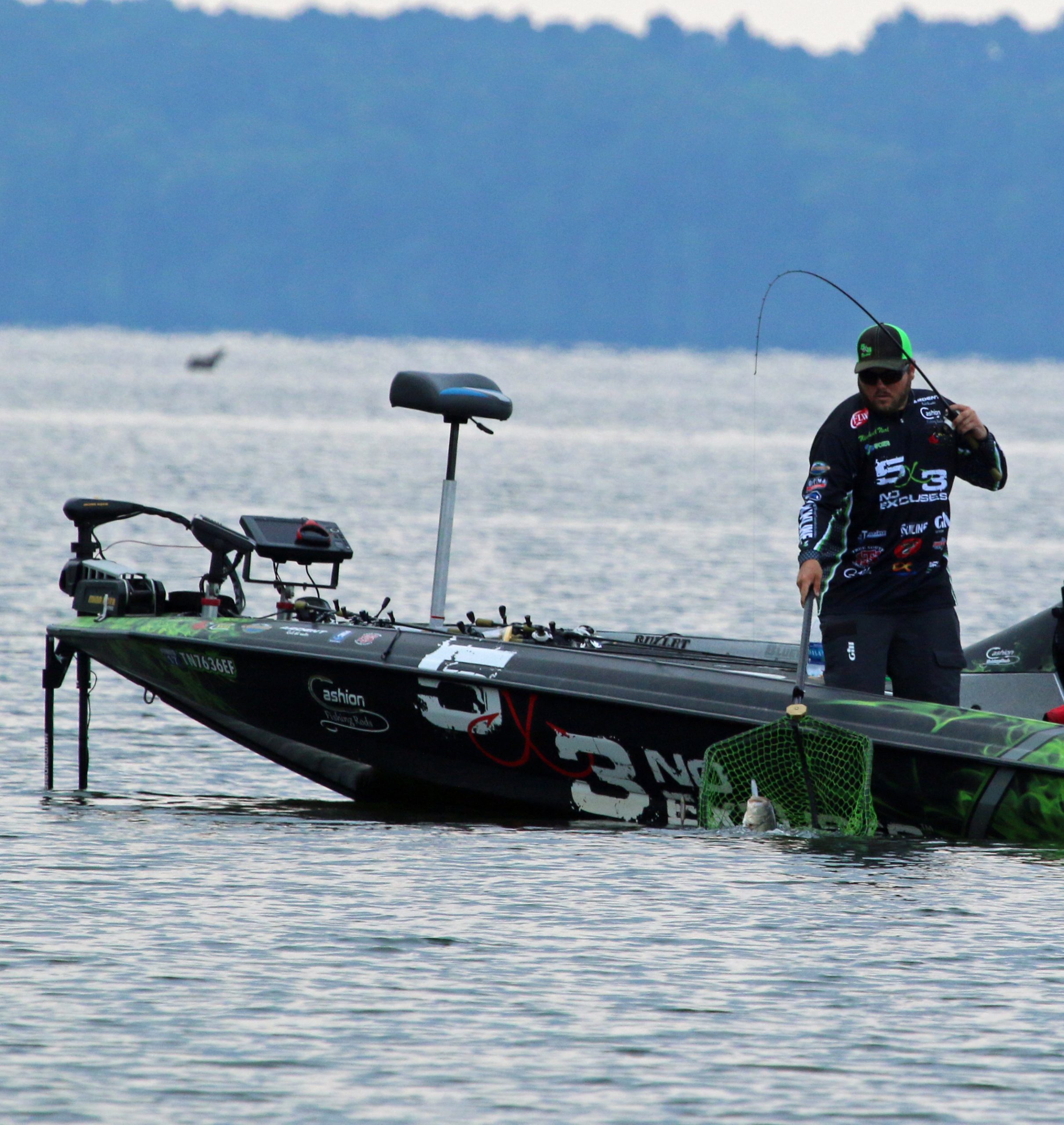 Baitfish can be a top clue as to where the bass are active in the shallows.

When topwater bass fishing, there are a couple of simple methods to locating shallow pockets, coves and bars on any lake. The first is a good topographical lake map. Paper maps of lakes can be found in local tackle stores or on the internet. Also, software companies like Navionics and Lake Insight offer chips for GPS mapping and sonar units for just about any lake in the country.

The second method is satellite photos. Google Earth will show the layout of the lake and possible shallow water hideouts for bass. The backs of coves, pockets and the upper reaches of creeks are prime starting spots. The access to the satellite imagery is free.

Lure selection for topwater bass fishing should be kept simple. Topwater baits, soft-plastic lures and spinnerbaits are great choices. Some days will require experimenting to determine the mood of the fish as to the offering they prefer.

“I caught all of my keeper fish on two different Strike King spinnerbaits,” Cochran reported of his Classic success. “One was a 3/8-ounce white and chartreuse with a Colorado kicker blade and a larger Indiana blade. The other bait was a 1/2-ounce with two willow-leaf blades.” 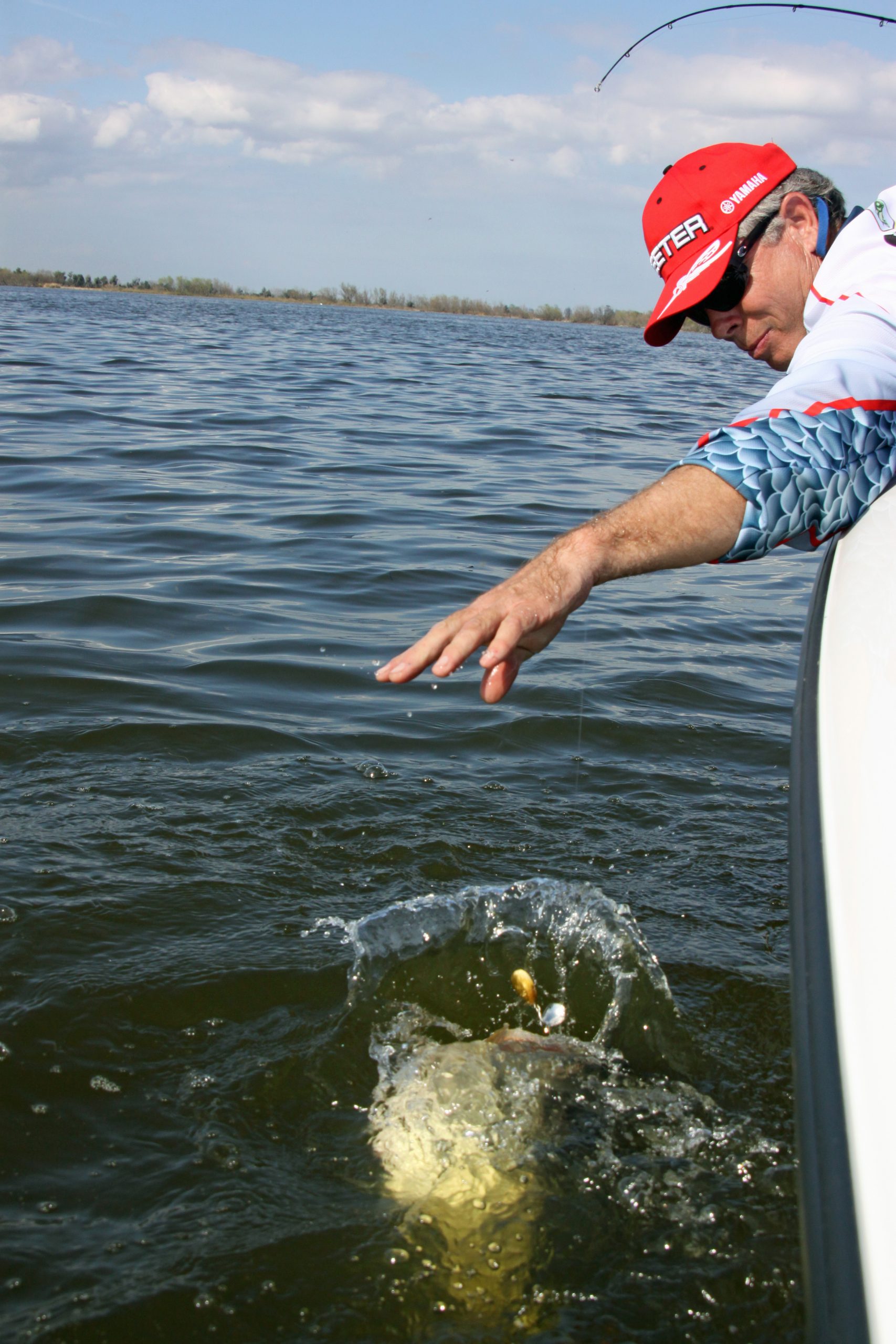 Spinnerbaits allow anglers to cover plenty of water in search for shallow bass.

Cochran noticed the bass would swirl at this spinnerbait and he wouldn’t hook up with the fish. On Day 2 of the Classic, he added a trailer hook. He discovered he could bump a stump with the bait and then kill it and he would get more strikes.

Several years later Cochran was fishing a tournament on famous Lake Guntersville. He motored his Ranger boat into a small cove about 100 yards across. He pitched a dark-colored worm about six inches long rigged wacky style to submerged stumps. Within 30 minutes, he had a limit of bass.

The bass were very finicky. The lure had to be placed very close to the stump. At the first indication of a strike, he would set the hook. With the exposed hookpoint, Cochran was able to stick more bass even on lighter strikes.

On Lake Wheeler, Neal’s approach to topwater bass fishing was a little different. He used a rotation of three of the best shallow water bass lures throughout the day to catch a limit of bass. 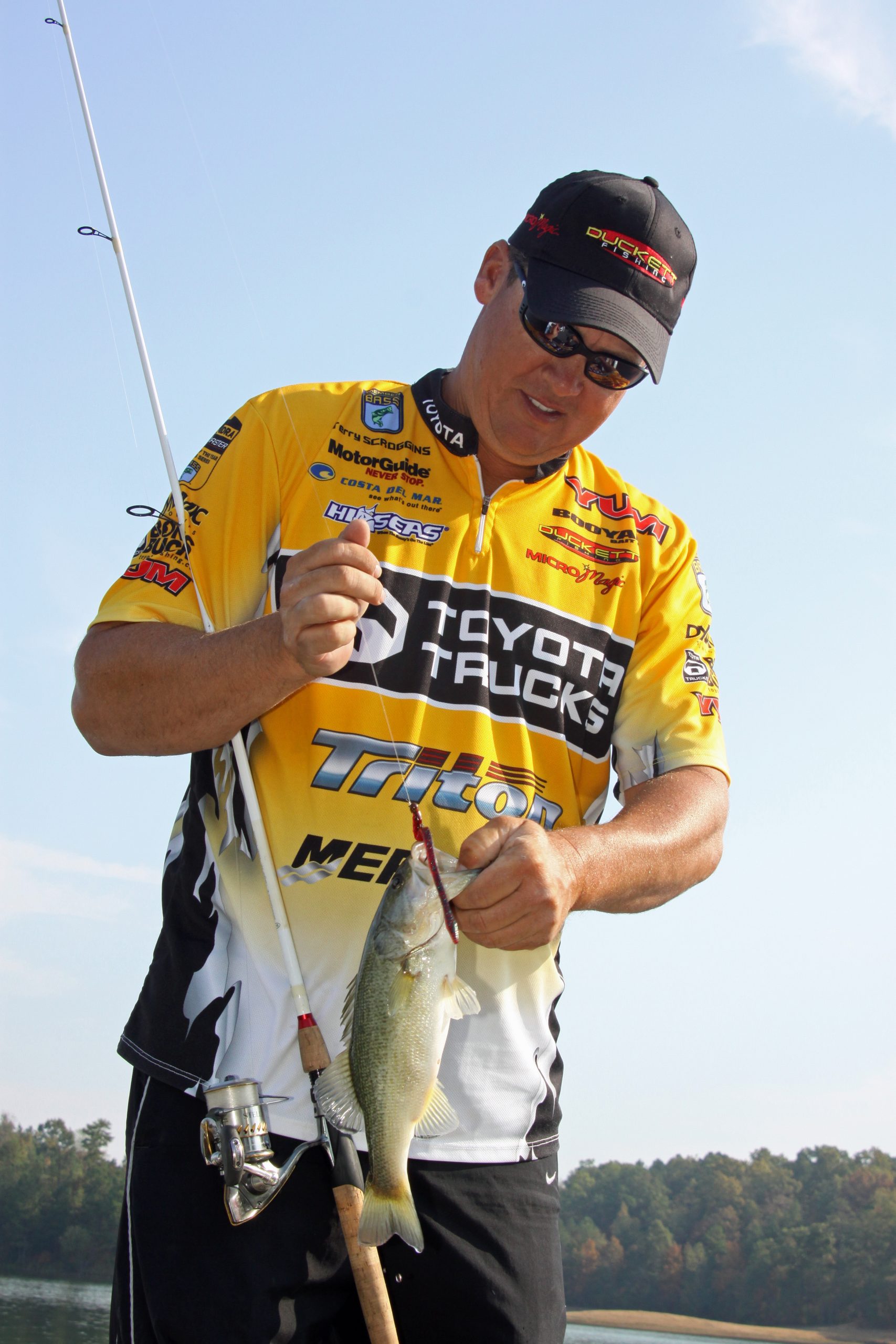 Soft-plastic baits are a top choice in coaxing bass from shallow cover.

“I would start off each morning with a Carolina-rigged Big Bite Baits finesse worm to get a quick limit,” Neal comments. “Later I switched between a topwater walking bait and a swimbait.”

Neal says he changed out the rear hook on the topwater bait. He replaced the hook with a white-feathered Gamakatsu treble. He would watch for the wake of a shad being chased by a bass and cast in front of the fleeing shad. He says he fished the lure with very slow cadence to trigger strikes.

When the bite slowed, Neal would reposition his boat and make casts in a different direction. Sometimes he would stand on the deck and wait on the baitfish or bass to surface before casting. Often when fighting a hooked bass back to the boat, the school would get fired up.

Over the course of the 4-day FLW Cup, Neal milked enough bass from his shallow point to catch 50 pounds and finished in second place. He advises the use of his Power Poles allowed him to hold his boat on the shallow flat without drifting off.

One of the best shallow water bass lures employed by anglers for is a Zoom trick worm. The standard size is around seven inches. The worm is rigged Texas style and usually with no weight. Many thin water bass anglers opt for a 4/0 or 5/0 size extra-wide gap hook.

The trick worm rigged in this fashion is generally weedless. Cast it to stumps, rocks, brush and grass. The worm is allowed to fall slowly and given light twitches with the rod tip. This action simulates a wounded baitfish to draw strikes. Top colors for shallow bass are white, limetruse, black and green pumpkin. 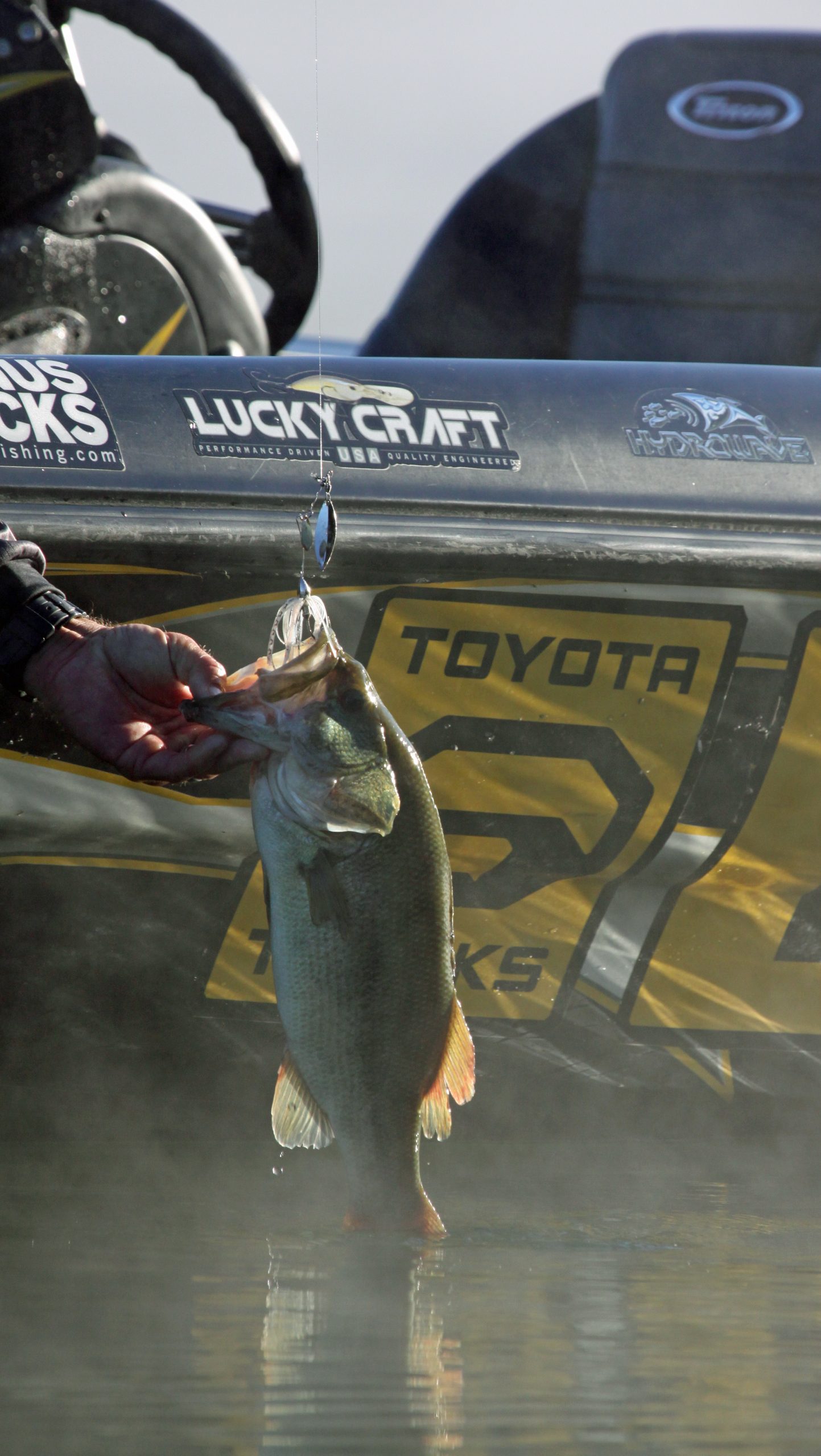 When using a spinnerbait, bump stumps and rocks to trigger a strike.

Another lure for shallow water bass action is a long minnow lure like the original Rapala floating minnow. The shallow-running cigar-shaped lure can be fished on top or with a slow retrieve a few inches beneath the surface. A winning color is black back with silver side.

When the sultry days of summer arrive, don’t be shy about topwater bass fishing in shallow water. A few key lures with the right presentation will make bass catching fun and a great day outdoors. 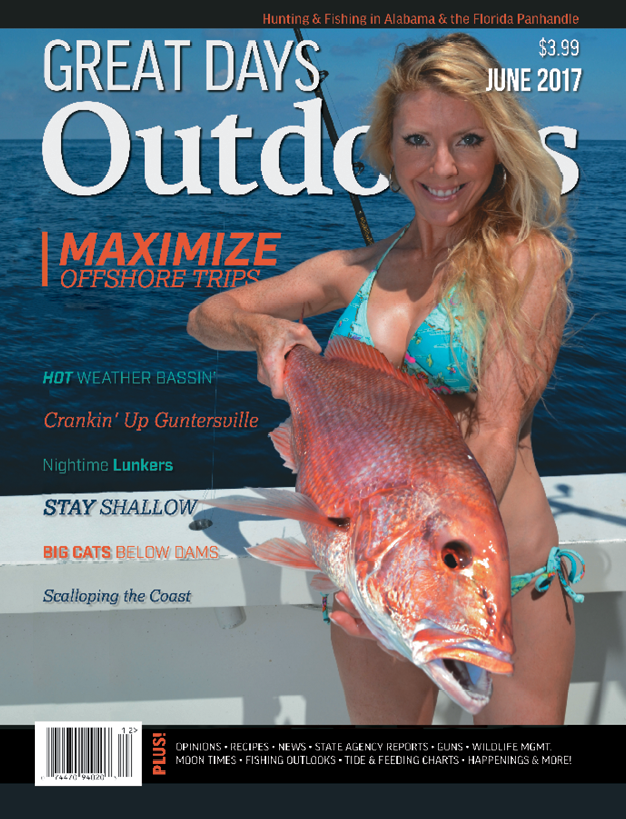 This article first appeared in the June 2017 print issue of Great Days Outdoors Magazine. For more great hunting and fishing content for the deep South, subscribe to Great Days Outdoors print and digital editions or click the image to download this issue.