Insider Secrets to Yellowfin Tuna Fishing the Gulf of Mexico

Insider Secrets to Yellowfin Tuna Fishing the Gulf of Mexico

When it comes to yellowfin tuna fishing in the Gulf of Mexico, the truth is that the best time to catch them is when you find them and therein lies the challenge.

These pelagic fish roam the briny blue in search of food and they don’t get beefy by being shy.  Gulf yellow tuna can weigh upwards of 100-200+ pounds and are tough and stubborn fighters. Still, the battle is worth it, as they are delicious eating, not to mention the challenge of the pursuit and the excitement of the catch.

Before you can try to catch yellowfin tuna you have to locate them and that is where Hilton’s RealTime Navigator comes into play.

Hilton’s RTN is an on-line website and system that allows anglers to remotely monitor natural conditions and identify productive fishing locations before they even pull away from the dock.  While Hilton’s promises no guarantee of fishing success, it can help eliminate spending time and burning gas motoring out to what could very well end up being non-productive fishing areas. 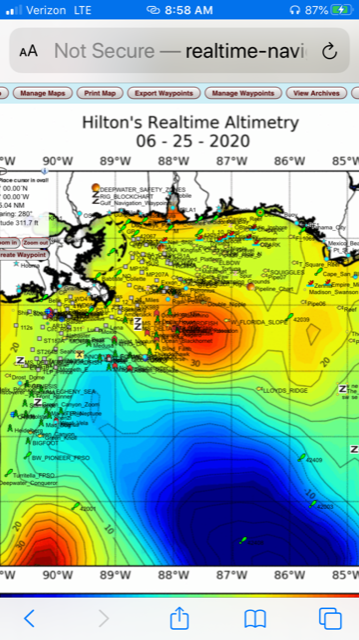 Utilizing science and technology will save you a lot of time searching for fish.

Altimetry is basically the measurement of the height of the sea surface and it shows whether the currents are “upwelling” or “downwelling”.  This is significant in that “upwelling” currents bring nutrients up from deeper waters where it interacts with the sunlight and is the foundation for the food chain.  On the other hand, “downwelling” where the water is pushed downward, holds few nutrients and subsequently, your chances of hooking a fish in this environment is lessened.   This water movement is a major component in fishing success but it is affected by other factors.

Hilton RTN founder Thomas Hilton explained that when you are targeting yellowfin tuna there are really two ways to go about it.

“You are either going to be out there in open water rip fishing along weed lines and color changes or you can target surface structures, like drillships, semi-submersibles and spars,” Hilton said.

Hilton advises that anglers start with altimetry to identify the upwelling and downwelling ocean current that you will find in open water.  In this environment your bait will be free-floating with the ocean’s currents.  The big kink in the works is when you fish deep water structures because your bait is no longer free flowing and it is staying within the refuge created by the structure. 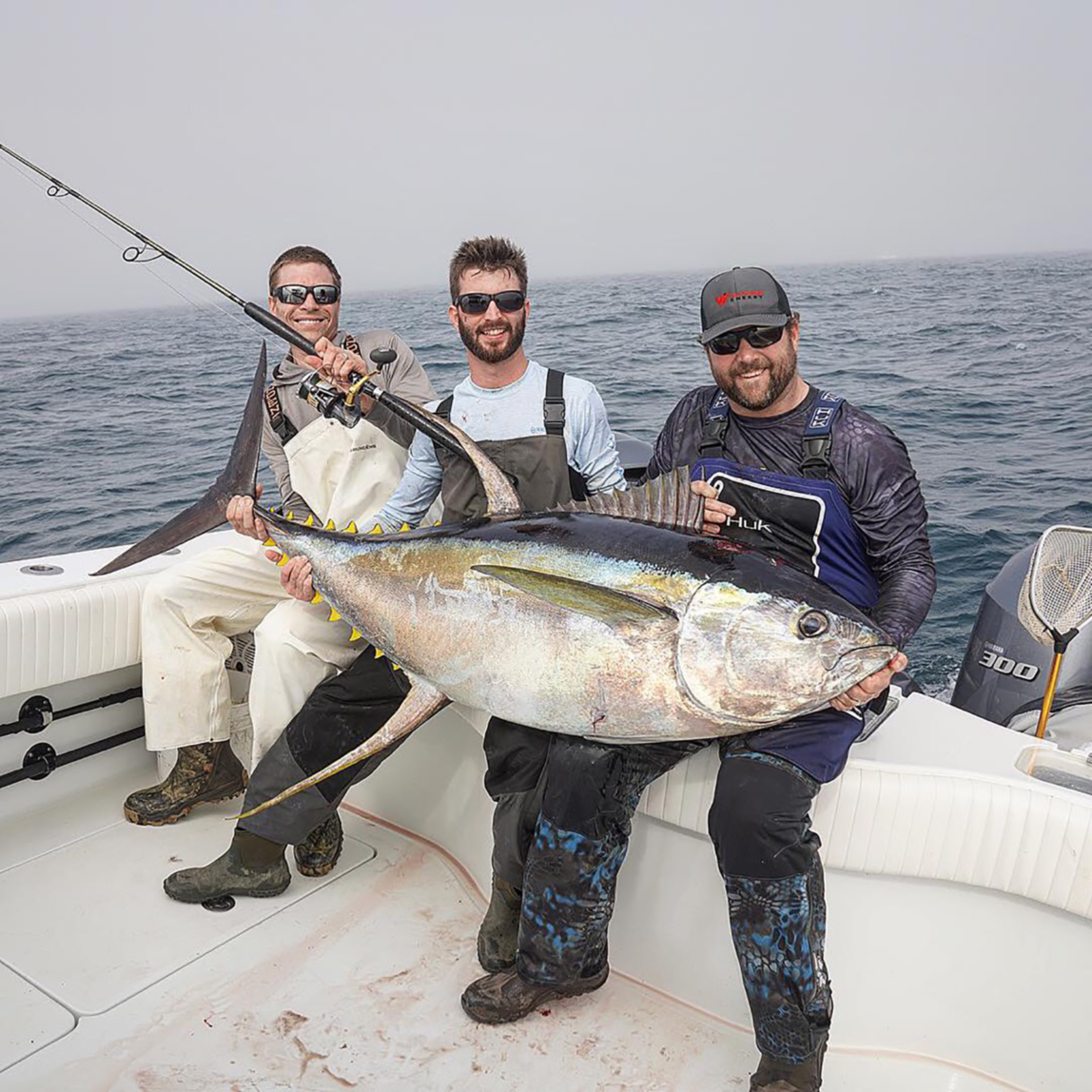 Catching yellowfin tuna like this takes a good amount of knowledge, as well as patience.

“If you are fishing the rigs you can pretty much throw the altimetry data out of the window because the bait is no longer flowing in the current and if the baits are not leaving the predators are not leaving either which means you can still catch fish.” Hilton said.

How to catch yellowfin tuna in the Gulf of Mexico – How Hot is it?

A “temp break” is where warmer water meets colder water resulting in a temperature change.  This could be a result of a current passing over varied topography, in canyons, drop-offs, kinks, ridges, bumps, etc. and the sudden change in depth creates turbulence.  These nutrient rich water “breaks” attract baitfish which attract predators such as yellowfin.  Subtle changes of even half a degree may be enough to trigger a bite.

“SST charts are useful in a variety of ways.  You can define which areas are within the preferred and tolerated comfort temperature zones of the species that you are pursuing,” Hilton pointed out.  “You can put in a minimum and maximum temperature range for and it will focus in on those parameters and it will only show the water in the region that is inside of that range.” 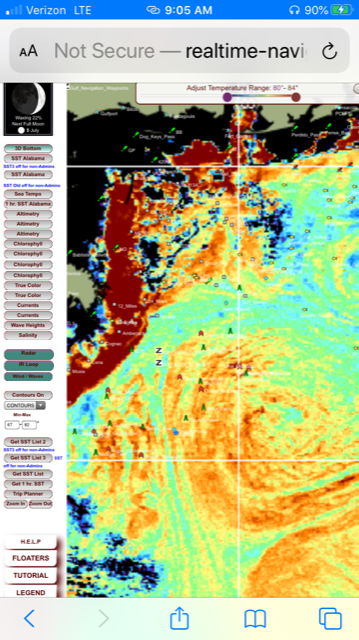 Realtime charts and data will help put you on the yellowfin’s much quicker.

Hilton noted that the regions are fairly large being about 250 miles across on average and because they try to optimize the sea surface temperatures based on the entire region, that results in a fairly large range of temperatures.  To address this, the system allows you to go in and focus on the area you want to go to and correlate the cool and warm colors with a cool and warm temperature scale.  You can insert that into your range and tell the system that is the only water you want to look at.  It will repaint the shot and anything that is cooler than your minimums and above your maximum gets marked.

“It is all about playing the odds when you think about how to catch tuna in the Gulf of Mexico and every time you get an additional overlapping favorable layer for a spot the greater your chances for fishing success becomes,” Hilton said.

Now that we have identified where we think we can catch them, how do we go about catching yellowfin tuna in the Gulf of Mexico?

First off, you need the correct tackle when yellowfin tuna fishing.

‘Heading off shore I always ensure I am equipped with the Shimano reels. Specifically, I use a Shimano Tiagra 30 reel on a 50-80 class, fully roller guided straight butt stand up rod,” Scruggs said.  ‘The reel is spooled with 500 yards of 80# Ace Hollow Ace core with a top shot of 60# fluorocarbon leader 300 feet but no less than 75 feet.”

“I also pair a 50-80 # stand up roller guided rod with a Shimano 50 Tiagra reel; spooled with 50-pound Ande monofilament. I secure my ball bearing swivel with a 15-foot Bimini twist,” he added.

Scruggs pointed out that hooking the fish is key to any successful fishing story and that’s why he uses 5/0 and 6/0 Mustad 39943 NP-BLN 4X offset circle hooks, tied to the leader with 5 wrap Uni knot.

The most popular ways to catch yellowfin are live baiting, trolling and chunking and all of them center around bait.

Veteran Gulf fisherman Angelo Depaola out of Orange Beach, Al. likes to use small live hardtails about the size of his hand to put yellowfins in the box. 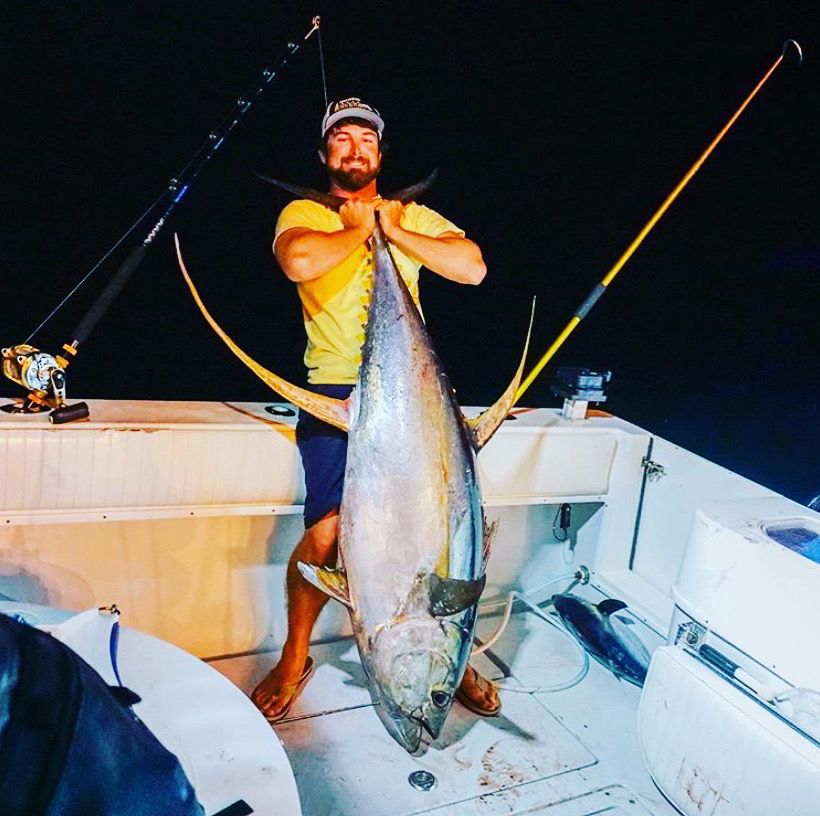 Trolling for yellowfin tuna is a viable strategy.

“With baits that size I like a small 5/0 circle hook.  For my main line I like anywhere from 60 to 80-pound mono with braid backing on a Shimano Talica 25 or even a Talica 50 baitcasting reel, “he added.

“I find the easiest way to catch yellowfins on live bait is put a few of them behind my boat and slowly “bump troll” them by bumping your engine in and out of gear around an oil rig,” Depaola said. “I’ve found that the up-current side of the oil rig is most likely where the majority of the bait will be.”

“When it comes to trolling for tuna and rigging the bait, I prefer a full ballyhoo spread with all 100-pound fluorocarbon leaders, some baits naked skipping and others rigged on blue and white Ilanders,” says Scruggs from Team Aquatic Charter Fishing.

Scruggs’s optimal weather for tuna fishing in the Gulf of Mexico is overcast with a slight chop on the water and during the new moon or right after.  He also advises anglers to do a little exploring.

“The tide and current are what congregate the bait and moving bait is where fish like to feed.  Scouting the right destination for fish can be scary but don’t hesitate to try new locations,” Scruggs said.  “Just be sure to avoid areas that aren’t thriving with signs of marine life, like fish, whales, birds flying, sea grass and things like that.”

Chris Vescey is an accomplished angler and also the writer of the GDO “Coastal Report”.

“Successful yellowfin fishing often involves several techniques in one trip. You may start out trolling, then switch to chunking, then live baiting or even throwing poppers to feeding fish on the surface,” Vescey said.

“Learning to identify tuna on your depth-finder is critical. I’ve pulled up to rigs before and marked fish as deep as 600 feet,” he said.  “While many boats will move on after a lack of surface action, I like to drop baits and jigs deep and start a chunk line to work those fish up. Patience pays off when tuna fishing in the Gulf of Mexico and I’m a big believer in the saying never leave fish to find fish.”