A near-miss is still a miss. Here’s how turkey hunters can evaluate (without excuses) what went wrong.

In a 12 gauge shotgun shell with two ounces of No. 6 shot, there are 405 pellets, on average. With this amount of shot, how is it possible to miss a turkey?

“There are many excuses, ahhh…make that reasons…a hunter can miss a turkey with a shotgun.”

Yet, we have missed and wonder why or what happened. Misses on turkeys may not be commonplace but when they do happen, the event has us scratching our head as to what went wrong.

There are many excuses, ahhh…make that reasons…a hunter can miss a turkey with a shotgun. Some instances are clear and simple, while others are a little more perplexing. Let’s look at some turkey hunting tips as to why, as turkey hunters, we are eating a sandwich instead of roast turkey.

Too Close for Comfort

Recent advances in shotgun choke technology have delivered some super-tight turkey tubes for almost any brand and style of shotguns. Some choke tube manufacturers claim 70- to 80-percent pattern efficiency at around 40 yards. Shot efficiency is the amount of the shot load in a 30-inch circle at 40 yards.

“With a super-tight choke tube, a hunter can shoot right past the turkey at close range,” says Richard Patty of Shotgun Sports in Anniston, AL. 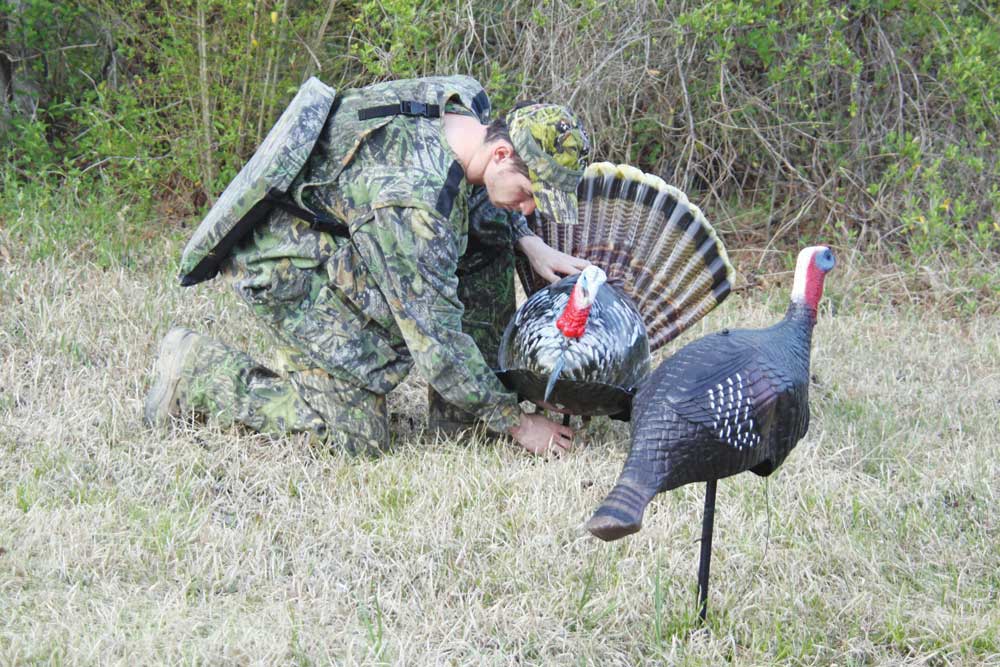 Set up your decoys at a known distance. Photo by Charles Johnson.

Patty explains the shot does not have a chance to spread into an even pattern at close range. That range can vary depending on (1) make of the gun, (2) choke type and size, and (3) the shotshell. Most folks would agree this is around 15 yards or less. In reality, it’s almost like shooting a rifle bullet at the range.

Super-tight shotgun chokes can be effective out to 50 yards, depending on the size of the shotshell and the amount of shot. Most of the super turkey tubes offer their best efficiency for taking down a gobbler at around 30- to 40-yards. The tighter constriction chokes or tubes perform better with smaller shot sizes such as #5 or #6.

Holes in Your Pattern

Another one of the turkey hunting tips as to why you’re missing the big bird is poor patterns from their shotguns. Not all scatter-guns shoot the same even with the same brand and shot size ammo. Two different guns of the same make, model and barrel length can have a different pattern.

“Turkey hunters should pattern their guns,” explains Patty. “Use a standard turkey target and shoot from around 40 yards to check how the shot will pattern.”

The National Wild Turkey Federation advises the ideal pattern for turkey hunting is 100 pellets in a 10-inch circle at 40 yards. With this shot density, there should be enough pellets in the vital areas of the head and neck to effectively kill a turkey.

The NWTF has set 40 yards as the standard range to make an ethical shot on a gobbler. 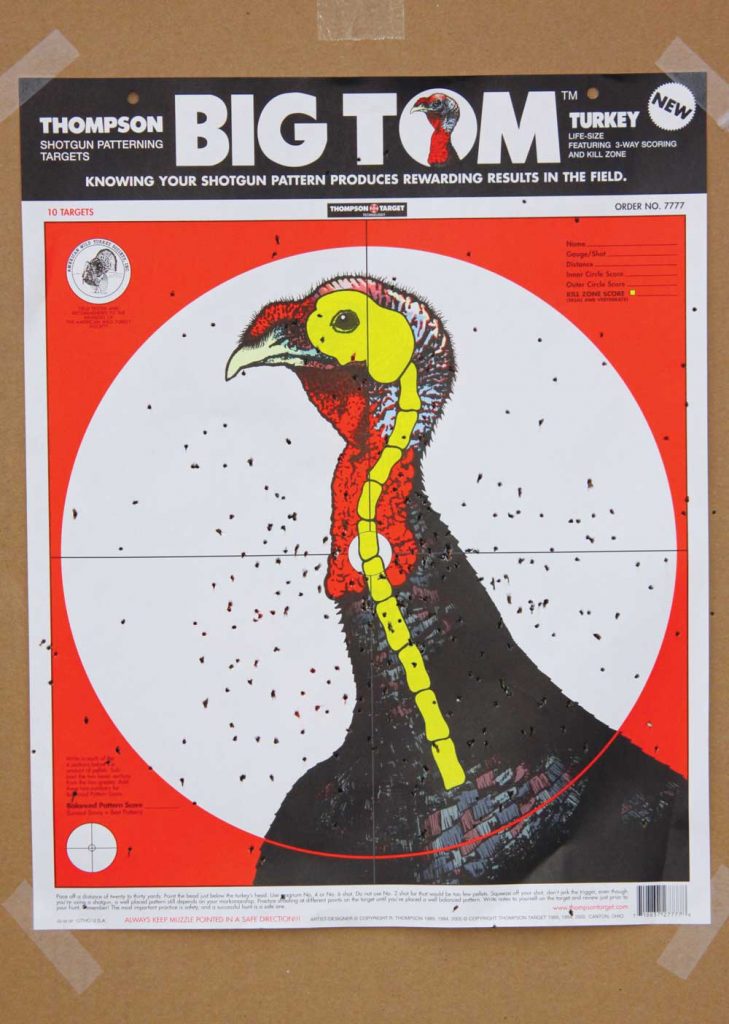 Is your shot pattern causing you to miss? Photo by Charles Johnson

Hunters can make their own targets to check the pattern on their shotguns. A large piece of cardboard or butcher’s paper around 36 inches square will suffice. Draw a 10-inch circle in the center of the paper and then draw a 30-inch circle using the same center point.

A small circle around one to two inches in the center and colored in black will give a good aim point.

Set up the target with a safe backstop and measure off or use a range finder to mark the 40-yard spot. Take careful aim and shoot your favorite turkey load at the target. Check the shot pattern for the number of pellets inside the 10-inch circle.

Also, look for any holes or open spaces in your pattern. If there are “holes” in the pattern, a rushed shot at a bird with the sight slightly off center could result in a miss. Or worse, a crippled turkey.

All Shot Shells Are Not Equal

You may be using the same brand of shell and shot size as dad or granddad have used for years. But that doesn’t mean your shell will perform the same in your gun as it does in theirs. Turkey hunters should shoot several different shell brands, shot sizes and loads to determine which particular shell delivers the best pattern at the target range before setting foot in the turkey woods.

Also, different shot weights in the brand of a shell can throw different patterns. A 1/34 ounce load could produce a more uniform pattern than 2 ounces of the same shot size. It’s important for turkey hunters to experiment with different shell loads and even choke tubes to discover which one is the optimum setup for your shotgun. 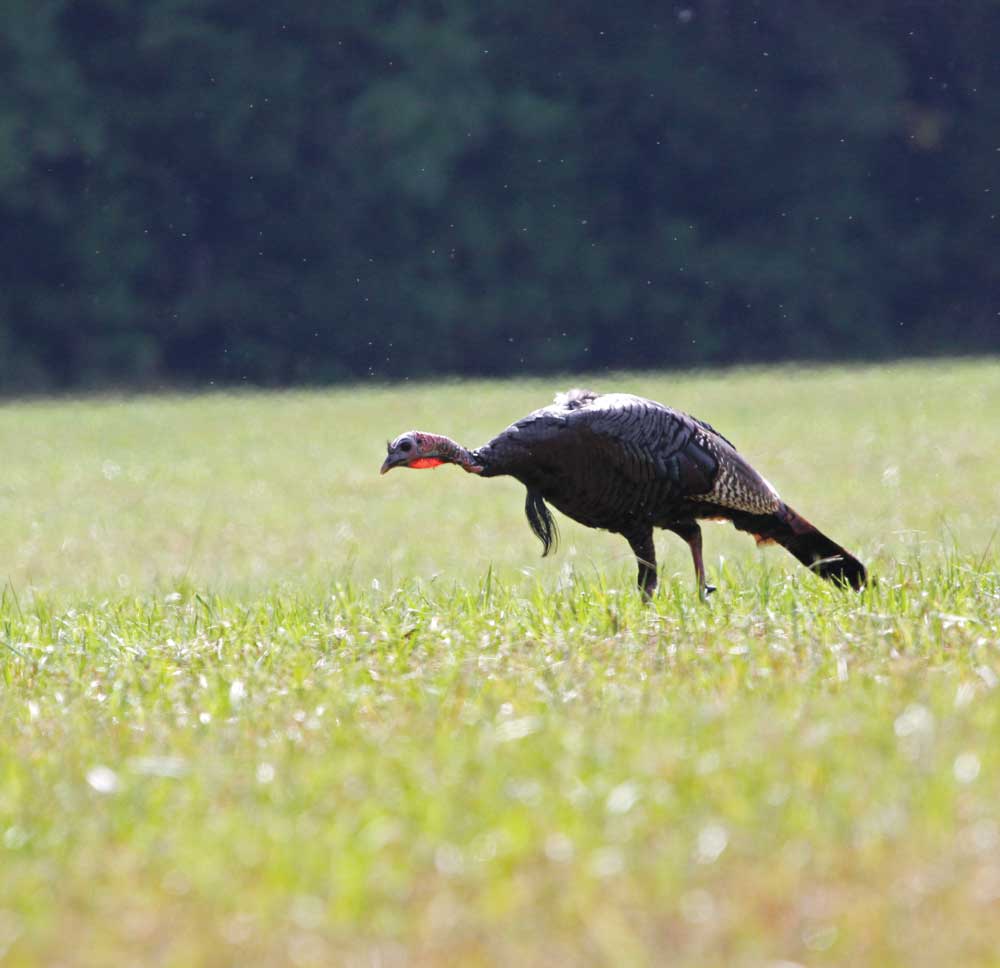 Turkeys may appear closer than they actually are in open fields. Photo by Charles Johnson

Other Excuses for Misses

There is a lot running through a turkey hunter’s mind as an old gobbler approaches. Should I call again or wait? Which way is he going to turn? Is he close enough? These and a thousand other questions can clutter the thought process of even a seasoned turkey hunter. And sometimes we just get in a hurry and rush the shot causing a miss.

“What went right and what went wrong?”

One of the main factors in blanking a turkey is misjudging the distance to the bird. A large gobbler in an open field or food plot may appear closer than he actually is. If possible, use a laser range finder to obtain the distance to a couple of objects. Or step off the distance from a rock or clump of grass. Some hunters set their decoys around 20 yards out and then they have a known distance from which to judge.

Another cause for a miss is small trees, limbs, or brush. Our eye and mind tends to focus on the bird and we do not see all the objects between us and the turkey. I missed a gobbler last spring when my shot load shredded a small sapling about thumb size between my barrel and the bird. Apparently, the head and neck of the turkey aligned perfectly behind the small tree.

Call it nerves or turkey fever, but there are instances in every turkey hunter’s log where he has missed one or two. One thing a hunter can do is evaluate every miss and every kill. What went right and what went wrong? As impossible as it may seem, we can miss a turkey with a shotgun.