How To Catch Wahoo At High Speed | Great Days Outdoors

How To Catch Wahoo At High Speed

How To Catch Wahoo At High Speed

Because they are arguably one of the most vicious predators in the sea with their lightning fast speed, bad attitude and a mouth full of razor-sharp teeth, wahoo fishing is without a doubt one of the most prized catches for sport fishermen around the world.

High speed wahoo trolling provides constant excitement to anglers and crew members as they suddenly skyrocket 8 to 10 feet in the air behind the boat with a lure in their mouth, the crew not realizing what they just saw until the reel starts screaming as line rips off. These fish use the element of surprise as they ambush prey at the blink of an eye and the flash of teeth, a shower of sparkling fish scales the only evidence of the attack left behind.

They are notorious for sending even the most experienced crews into frenzied delight as several fish attack the spread at once, resulting in a multiple hookup of two, three, or even four fish. They also provide excellent table fare, being considered by most anglers as one of the best-tasting fish out there. 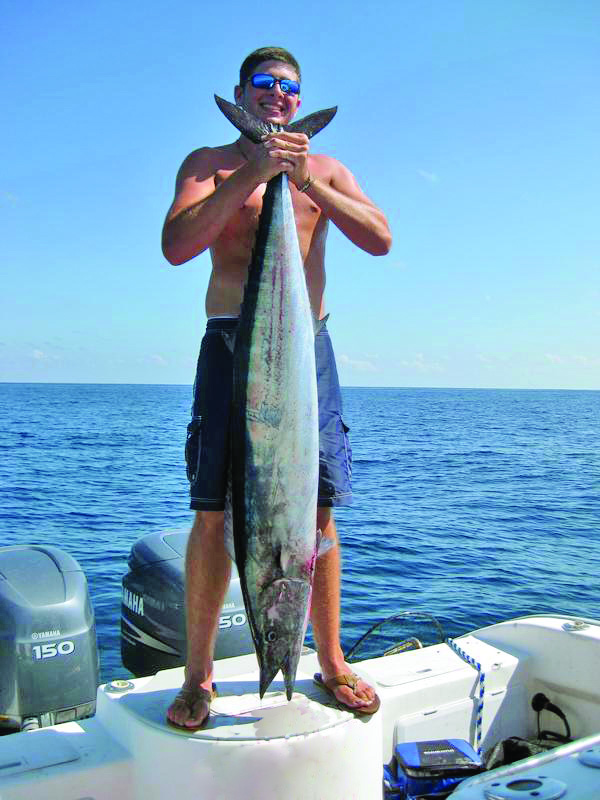 Chris Mowad shows off a wahoo he caught in the Gulf. This photo was taken by Chris Hood.

Trolling For Wahoo Tips – When and Where to Go

Wahoo are one the few pelagic game fish found in the northern Gulf that can be consistently targeted and caught year-round. However, the best time of year for catching wahoo is February and March. The only drawback to fishing offshore this time of year is that weather windows (periods of time in which the weather allows for a safe and/or comfortable fishing experience) are often few and far between due to the high number of winter fronts that hammer the Gulf Coast every winter and early spring.

Those who know how to catch wahoo trolling and are tough enough to brave the bitter, cold ride offshore are instantly warmed up with one of the hottest wahoo bites found anywhere in the world with boats catching as many as 20 to 30 wahoo in a day. Obviously, those fortunate enough to experience such a day are able to practice catch-and-release, keeping only the biggest fish caught because it’s just as much work to try and give all those wahoo fillets away before they spoil as it is catching wahoo and cleaning them.

“Trust me; I’ve been among those who learned that lesson the hard way.”

Using any of the numerous online marine weather forecasting sites is imperative for any offshore trip, but even more so during the winter months. A hard lesson learned can come to someone who heads offshore on a seemingly nice day without first checking a forecast, only to have a front follow behind them, bringing very high north winds with it.

Being such a shallow body of water relative to other saltwater bodies around the world, it takes very little energy to kick the seas up in the Gulf of Mexico, and it can go from slick calm to 12- to 14-foot seas in a matter of an hour. Trust me; I’ve been among those who learned that lesson the hard way.

When a weather window presents itself, and it’s time to decide where to go, there are certain clues to look for that can help narrow down locations where you’ll find the best fishing. First, for catching wahoo, it’s important to fish areas that are in blue/green, blended blue or blue water. Online services such as Hilton’s Realtime Navigator are excellent resources to minimize the guesswork when planning a trip offshore—numerous tools and analysis pinpoint the hot areas to fish.

Although they can be caught in the deeper areas of the Gulf, wahoo tend to congregate in areas where either natural or man-made structure exists in 150 to 450 feet of water. Natural structure being the dramatic bottom contour changes that can be found all along the 100 fathom curve, and man-made structure being oil/gas platforms, artificial reefs, and even floating debris. Areas in which all three of the previously mentioned factors exist provide the best opportunity for filling the boat with trophy wahoo.

There are several spots that match such criteria. Using Orange Beach as the reference point, to the southeast, fishermen can troll along the 100 fathom curve, specifically areas where the most drastic bottom features are present. The Oriskany is another hotspot for catching wahoo in that area. However, heading southwest provides substantially more options such as The Steps, Alabama Alps, any of the fixed platform rigs in 150 to 450 feet of water, and contrasting bottom features along the 100 fathom curve.

When looking for the best bottom contour changes to fish, fishermen can use the chart on their GPS. The older GPS software has lines that represent bottom contour change, so if fishing with an older unit, look for areas in which there are several lines close together. Most of the newer GPS machines feature a 3D bottom contour map that shows fishermen exactly what they are trolling over and makes finding fish much easier. 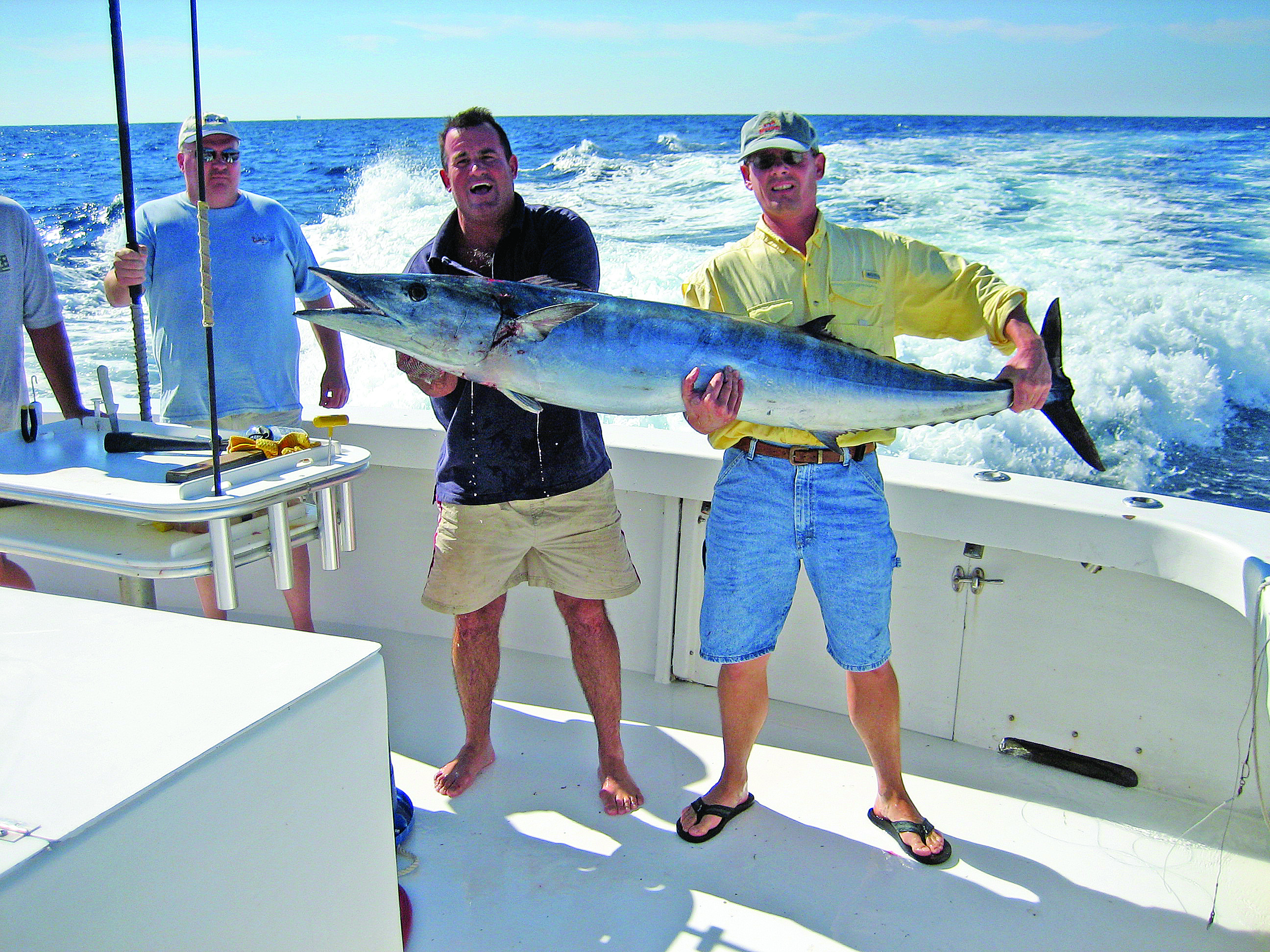 The vicious wahoo puts up a tenacious fight and provides constant excitement to anglers. This photo was taken by Chris Hood.

With the proper high speed wahoo rig, catching wahoo is fairly easy since they can be enticed with shiny, fast and erratic swimming lures such as Rapala diving plugs. Although they can be consistently caught using heavier monofilament leaders (300-pound test or more), your best bet is to employ short wire or cable leaders, especially for diving lures like a Rapala, Yo-Zuri Bonita, or a Mann Stretch +30. Cable leaders around 400 to 500 pound test are the best option because if heavy wire is accidentally bent at a sharp enough angle, it will break. Cable is much more flexible.

Several manufacturers make wahoo trolling lures specifically for catching wahoo. A typical wahoo lure has a tapered and/or jet head that is made to troll at high speeds and commonly features hair-like skirt material because those sharp teeth will rip a traditional plastic skirt to shreds. Black Bart has several of the top wahoo lures, including Rum Cay Candy, San Sal Candy, and Crooked Island Candy. When targeting wahoo, it’s hard to beat the good ol’ Ilander-ballyhoo combo. A real or artificial ballyhoo can be used here as well. Other deadly lure brands include Bahama Lures and SevenStrand.

All the best wahoo lures mentioned above, except for the diving plugs, work well when rigged with a trolling weight that serves to keep the lure in the water and/or under the prop wash at higher speeds. When trolling for wahoo, a 16-ounce trolling bar weight should keep most lures in the water at high speeds, but sometimes a heavier weight might be necessary.

Due to the high speed and amount of weight being trolled through the water, a 20- to 30-foot-long monofilament leader around 200 to 250 pounds is suggested to serve as a shock absorber to prevent line and tackle damage that could result in not only losing a nice fish but all the tackle, too. Attach the high speed wahoo lure to the trolling bar, then the other end of the trolling bar to the shock cord leader. Lastly, attach the shock cord to the snap swivel on your rod. Another key piece of wahoo fishing tackle is a ball-bearing swivel that will turn smoothly at all times, thus preventing your line from twisting.

Hi-Tech Wahoo Hunting“Wahoo are much like their cousins king mackerel in that they like to hang around structure such as surface platforms, wrecks, rocks, salt domes, and ledges.  Yet they can also be found on open water rips and weedlines,” says Thomas Hilton, president of Hilton’s Realtime-Navigator.  “Offshore conditions are dynamic and continually change, so it’s important to know what the water conditions are on those spots when wanting to venture out and target them,” Hilton said.  “We track as many variables as we can; sea surface temperature, water color (chlorophyll), surface currents, upwelling and downwelling currents (altimetry) and other factors all presented in relation to known fishing spots and underwater topography.”  Hilton pointed out that each image will have favorable and unfavorable areas and the key is to find where there are the most overlapping favorable conditions for increased chances of success. “While wahoo can be found from inshore waters to well over 100 fathoms, their preferred depth is 30 to 40 fathoms,” Hilton said.  “They are warm-water fish, primarily inhabiting blue Gulf Stream waters, but can tolerate temperatures as low as 65 degrees as long as a warm water rip is close by.  These rips, collecting flotsam and sargassum are continually moving and Hilton’s provides the tools to ascertain which way and how fast they are moving so that you can interpolate how to intercept them.”