“I got him!” Mike Carter of Cedar Bluff, Alabama, who guides for bass and crappie at Guntersville and Weiss lakes,  yelled as we did a little bass fishing at night in the summer of 2020. “Get me the net.” I immediately found the net, handed it to him and watched as he skillfully played the bass down. Using his rod, he dragged the big largemouth into the net and lifted the fish into the boat. We only had been on the water for about an hour and a half before Carter caught this 6-1/2-pound largemouth. Mike definitely has tons of night fishing tips and knows what lures to use for bass fishing at night. 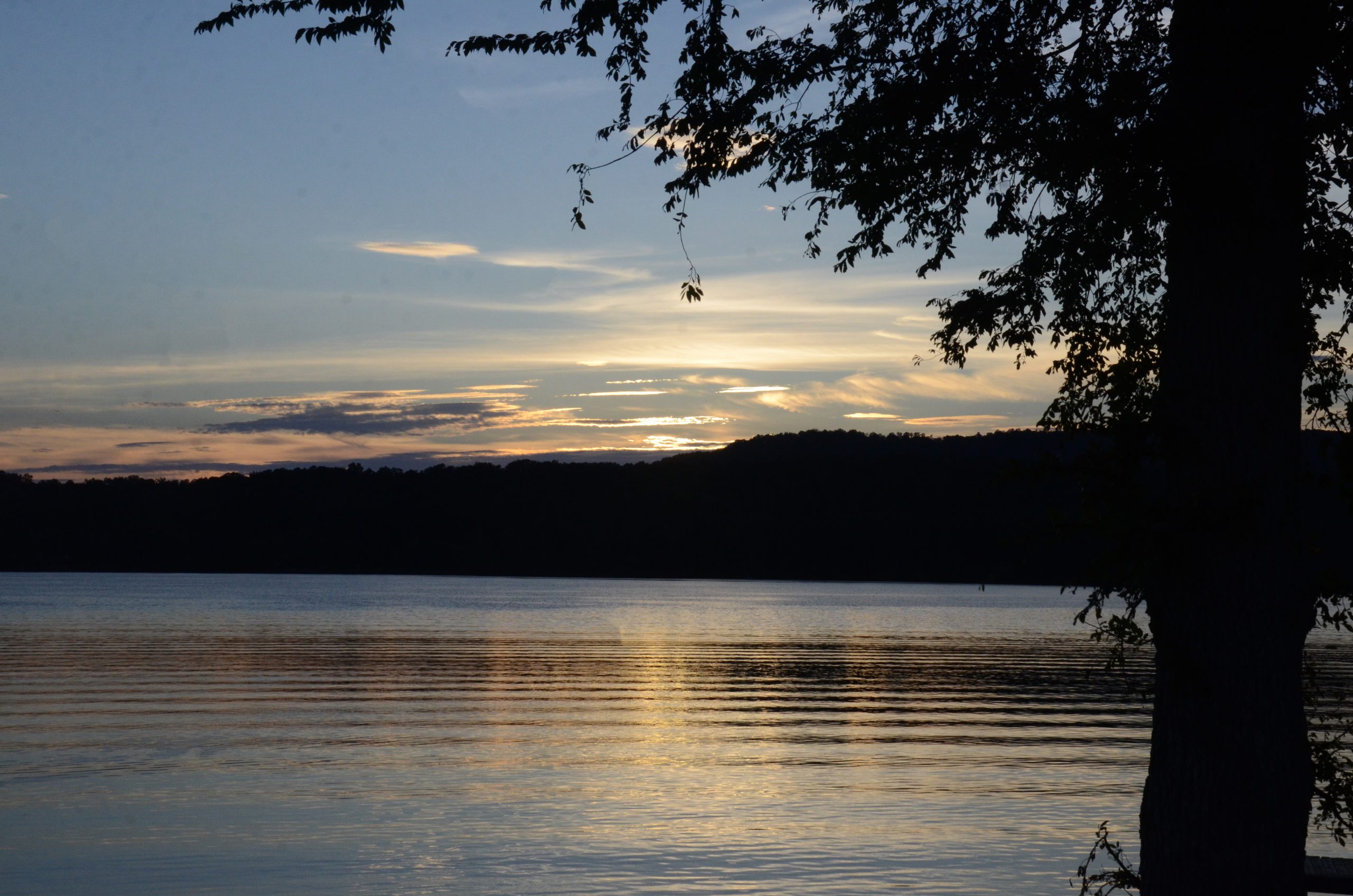 When the sun goes down on beautiful Lake Guntersville in north Alabama, most bass fishermen leave to go home for supper and a good night’s sleep, but not Mike Carter, who believes that’s one of the most-productive times to fish for bass.

Once Carter had the bass in the live well, I asked him to tell me what just happened and why.

“Just now I was slow-rolling my 3/4-ounce Choo Choo spinner bait with a Bob’s Frog trailer made by Fish Bites above the eel grass in 8-10 foot deep water,” Carter explained. “As soon as the spinner bait came out across the top of the grass and landed on top of the mussel shell bed, the bass annihilated it. Using this technique, it’s unbelievable how many bass my party catches. On a four hour night bass-fishing trip, two people catching and releasing 15-20 bass isn’t unusual. We have caught more bass than that on other nights, and they were quality bass as well.”

Carter reports that by fishing at night, the bass aren’t nearly as spooky as they are during the daytime. Therefore since the big bass also bite more readily and more aggressively at night, Carter and his clients will catch a good number of bass – often weighing 6-8 pounds each. Carter emphasizes that his fishing party at night can get away from the crowd and dodge the heat, which sometimes may be over 100 degrees in the daytime. One advantage that Carter has too is that he fishes underwater grass lines, well away from the bank, that he pinpoints with his depth finder. We were 200 yards away from the nearest bank when he caught the 6-1/2-pounder. 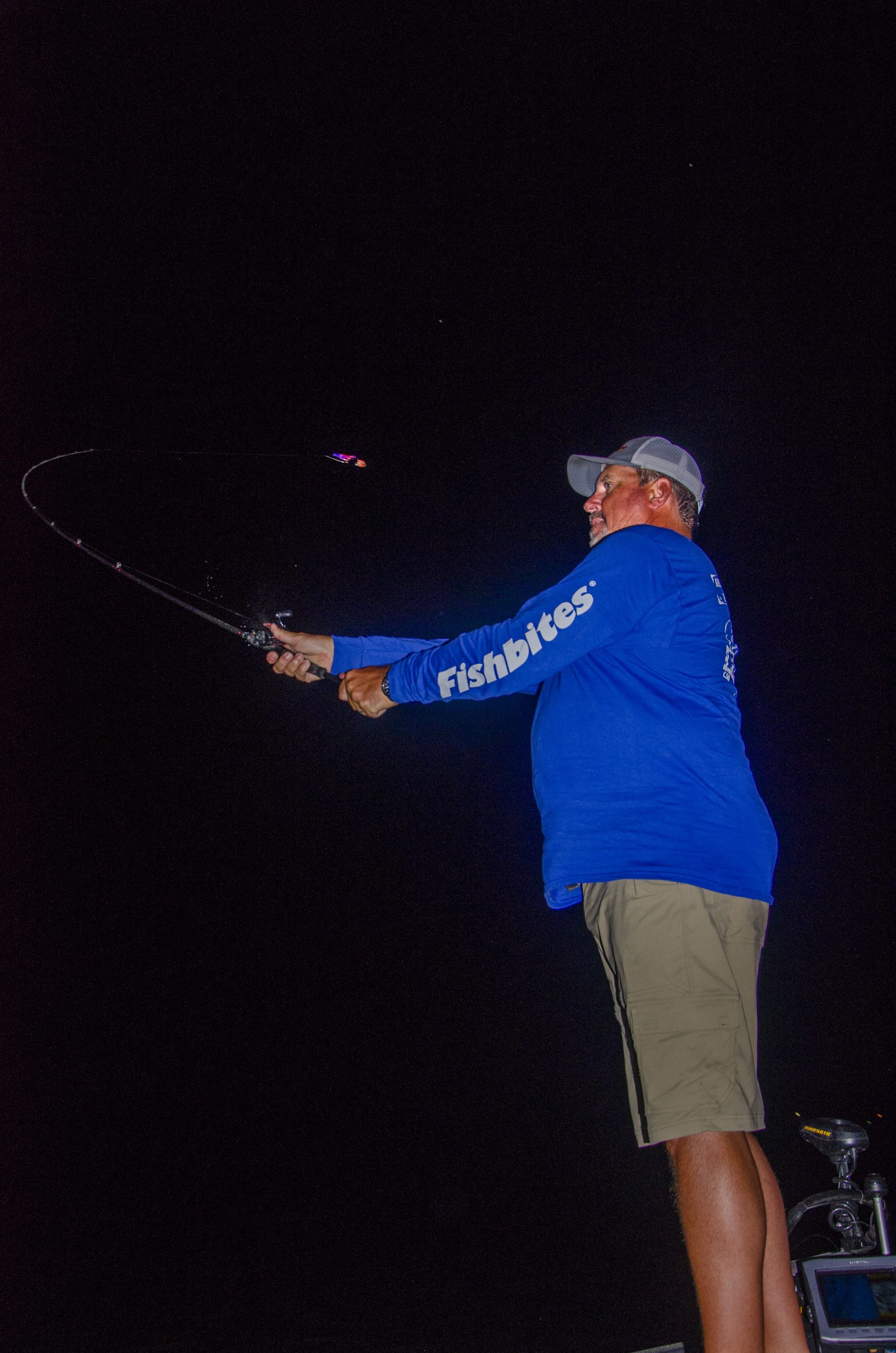 Mike Carter makes long casts and reels in his spinner bait just above the grass and over the tops of shell beds where the bass lay in wait at night at Lake Guntersville.

“The real sweet spots for night bass fishing in the summer on Lake Guntersville are where there’s underwater grass in 8-14 foot deep water with current breaks that have been created by mussel shell beds,” Carter said. “The bass will hold in the grass just off the edges of those mussel shell beds looking up toward the surface for bait coming out of the beds.”

During the day in the spring, the summer and early fall, the power plant upstream at Lake Guntersville will start generating current, but this rarely happens at night. If the current does run at night, the points on the main river can produce large numbers of bass. However, Carter believes that the best place to fish when the current’s not running is where shell banks break-up the underwater grass. Carter usually fishes from 8 pm until 12 am but mentions, “If we find a good school of bass, and my clients are catching them, I’ll stay longer until the bass bite stops.”

One of the reasons that Carter is so productive is because he’s enjoyed fishing day and night for bass on Lake Guntersville since 1989. Although he’s spent plenty of time on the water, he’s still willing to try new lures and techniques to catch wall hangers.

Bass Fishing at Night in Summer: Finding the Fish

“I use Lowrance depth finders and even though my units have a night mode, I turn the brightness of my screen down very low at night,” Carter explainsed. “I follow the contour lines that my depth finder shows me and try to stay in 10-14 foot deep water, since that’s where underwater grass generally will be. Anytime I see an irregularity in the contour lines in water that deep, I’m certain that a mussel shell bed is there. Mussels attract plankton, plankton attracts minnows, shad and crawfish, and those critters attract the bass. So, even though I’m fishing down an underwater grass line, I’m looking for those shell beds on underwater current breaks as well. Almost all of the lakes on the Tennessee River are famous for producing bass on their shell beds.” 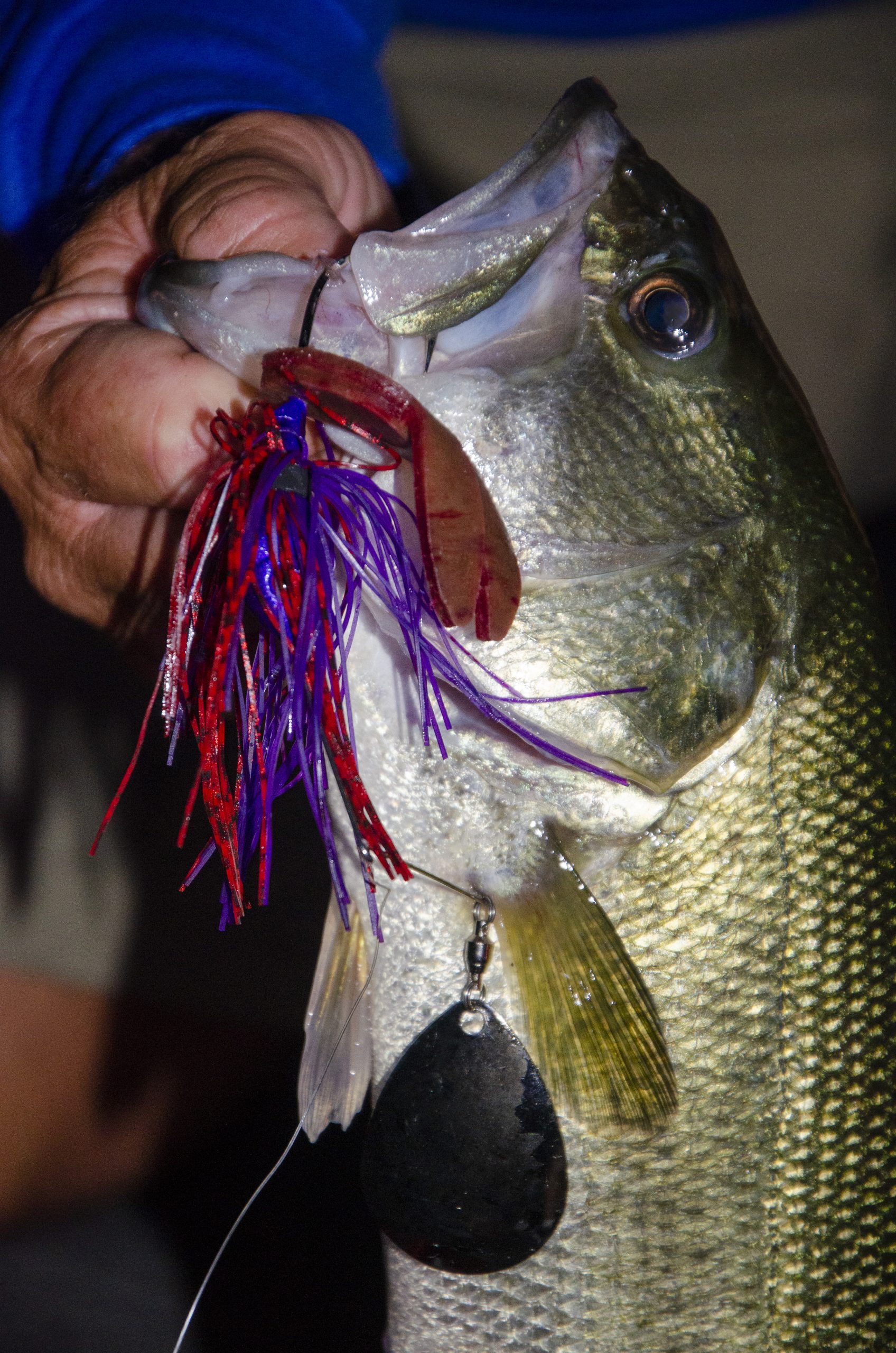 Mike Carter’s secret weapon is a Choo Choo spinner bait with the red-and-purple skirt, a No. 7 Colorado blade and a brown Bob’s Frog trailer that’s been dipped in red dye, like the one seen here.

“I retrieve my spinner bait very slowly,” Carter reported. “I want that spinner bait to barely tick the top of that underwater grass. If I feel the spinner bait getting hung in the grass, I’ll pop it with my rod and continue my retrieve. Even though I’m constantly clearing grass off the lure, I’m sure to stay in contact with the grass because as soon as the spinner bait is out of it and over the shell banks, those bass will attack.”

“I just started using the Bob’s Frog trailers made by Fish Bites Lures, and they’re somewhat stiffer than most trailers,” Carter said. “They’re also impregnated with a fish attractant that definitely causes the bass to bite. I like this trailer because it makes the spinner bait float somewhat higher in the water than other trailers will. That action allows me time to reel the spinner bait above the grass before it reaches the underwater shell banks. Not only that – this kind of chunk trailer gives the bait bulk and buoyancy to solicit strikes.” 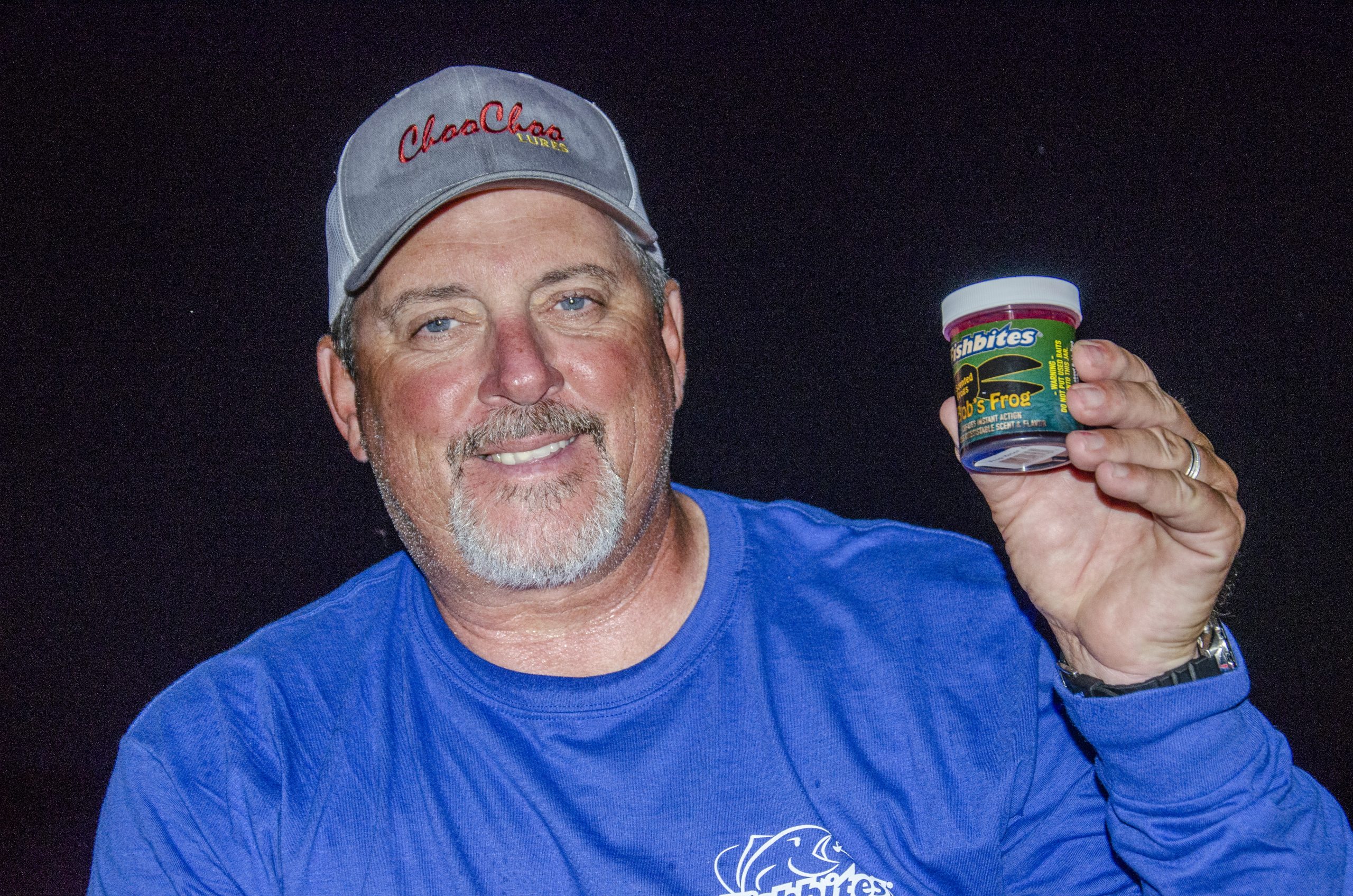 Although Bob’s Frog comes in several different colors, Carter’s favorite color for a night bass fishing lure is brown. When he fishes, he dips the brown bait in red dye to give that brown trailer an orange-like color. The Bob’s Frog is similar to the old Uncle Josh pork chunk in many respects.

“One of  the similarities between the Bob’s Frog and the Uncle Josh pork chunk is that after you catch three or four bass on it, the bass pulling on that trailer will wallow-out the hole where you’ve put the hook in the trailer, causing the trailer to slide off the hook,” Carter emphasizes. “To solve this problem, I take a paper punch, cut out some really-small pieces of plastic from a milk jug and put them behind the trailer. This way, the trailer is secured to the hook, and you can fish one trailer for several nights. The good thing about this Bob’s Frog trailer is that it’s tough like the Uncle Josh pork chunks, and it won’t be damaged in any way.” 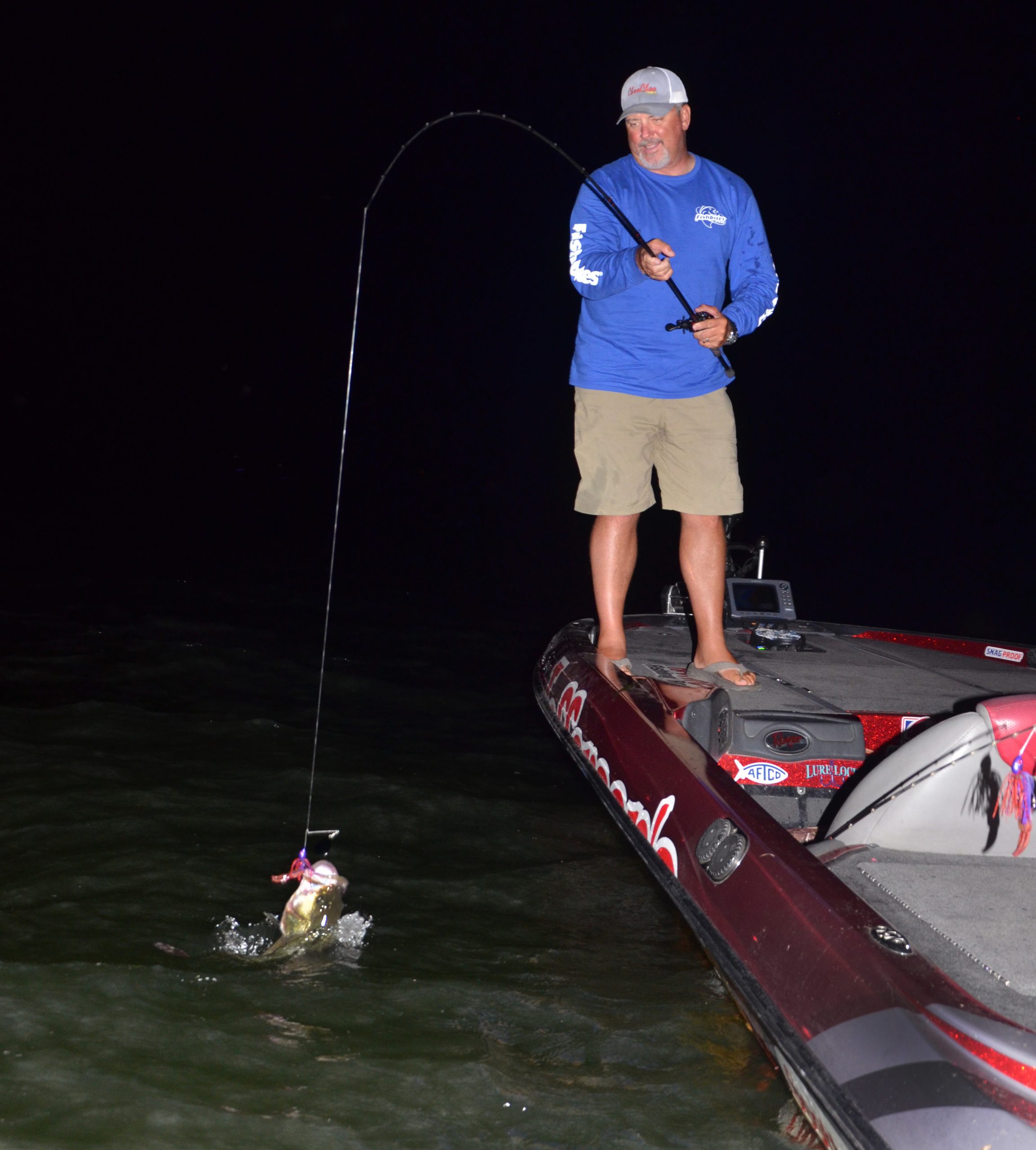 When Carter has a 6-pounder on his line, he doesn’t jerk the bass into the boat but rather lips or nets the fish.

Carter came up with this idea of using a paper punch and milk-jug plastic disk on the first night  he fished with the Bob’s Frog trailer when he caught eight, 4-6 pound bass before he lost the trailer.

“I know of other fishermen who have tested Bob’s Frog trailers during the day and have found that it tends to be too stiff to fish for bass in the daytime. I do believe this bait can work during the day, but I’ll just have to experiment more with it and use different colors,” Carter added.

After Carter put a picture of a 6-pound largemouth and a 4-pound spotted bass on his Facebook page, caught from the first time he fished the Bob’s Frog, he was overwhelmed with the numbers of calls and emails he got from anglers, looking for night bass fishing lures and tips, wanting to know where he got the Fish Bites Bob’s Frogs. Carter posts on his Facebook page just about every day he fishes. Although he’s primarily a bass guide, he also conducts quite a few crappie-fishing trips during the winter months on both Guntersville and Weiss.

More Info on Bass Fishing At Night In Summer

To learn more about Mike Carter’s fishing adventures, you can contact him at 423-802-1362 or follow his Facebook page for more bass fishing at night tips and tactics. For more information on Bob’s Frogs and where to order them, check out Fish Bites website at https://fishbites.com/freshwater/.