How To Catch Triggerfish And Beeliner | Great Days Outdoors

How To Catch Triggerfish And Beeliner

How To Catch Triggerfish And Beeliners

You’ll never see a sign on the Gulf Coast docks that says “Triggerfish and Beeliner Charters”.

On the other hand triggers and vermilion snapper, the other name for beeliner, have saved thousands of reef fishing trips over the years on those days when the grouper and red snapper are hard to come by. They also add a nice variety to a catch of bottom fish.

And some anglers say they prefer triggers—which mostly eat coral, crabs and shrimp—and vermilions on the table.

Triggerfish are medium-sized reef fish with small mouths armed with cruncher-type teeth somewhat like a parrotfish. As you’d expect, they are coral grazers, eating crabs, sand dollars, shrimp and other crunchy critters on the bottom.

Triggerfish get their name from spines on the dorsal fins that can be used as a predator defense and for anchoring. The needle-sharp front spine is like a little ice pick, and when the fish pops it up it stays that way until the fish deflexes the smaller second spine, “triggering” the first.

Triggers are not giants, but they can get to respectable size. The IGFA all-tackle record is 13 pounds 9 ounces for gray triggerfish, the most common Gulf and Atlantic species. They reach lengths to 28 inches at the fork, per the National Oceanic and Atmospheric Administration Fisheries (NOAA). The ones most of us catch are two to four pounds. 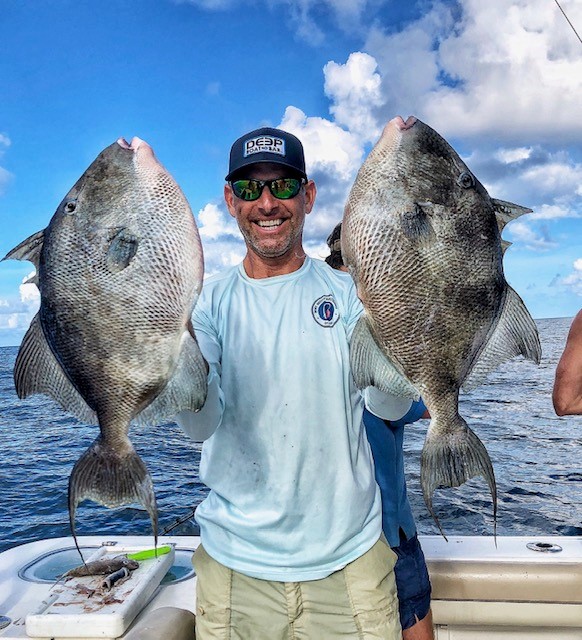 Triggerfish are a great fighting and a great tasting fish.

NOAA Fisheries says the Gulf of Mexico stock is not overfished but still rebuilding to target levels. Tight harvest limits should help the species continue to rebuild.  Alabama and Florida’s Gulf of Mexico shore both have a limit of one per angler per day 15 inches or more to the fork of the tail.

Scott Bannon, Director of the Alabama Marine Resources Division (MRD), says state studies indicate triggerfish numbers are going up in state waters and that numbers are higher than estimated by federal fishery managers, just as with red snapper. The state’s “Snapper Check” app, which requires mandatory reporting for all anglers catching reef fish in Alabama state waters to 9 nautical miles offshore, will provide a more accurate picture of the populations in seasons ahead.

All anglers 16 years of age and older who possess gulf reef fish including triggers and beeliners are required to have an Alabama Gulf Reef Fish Endorsement.

Beeliner snapper make up for their lack of huge size in numbers. Schools of hundreds sometimes swarm over the same reefs where triggerfish, red snapper and other reef species are found.

They average one to three pounds in most waters. Some anglers use five or six hook beeliner fishing rigs, giving them a shot at catching multiple on each drop. The extra hooks and baits also mean that if the fish nips off the bait on several hooks, you might still get a hookup on any given drop due to the remaining baited hooks. 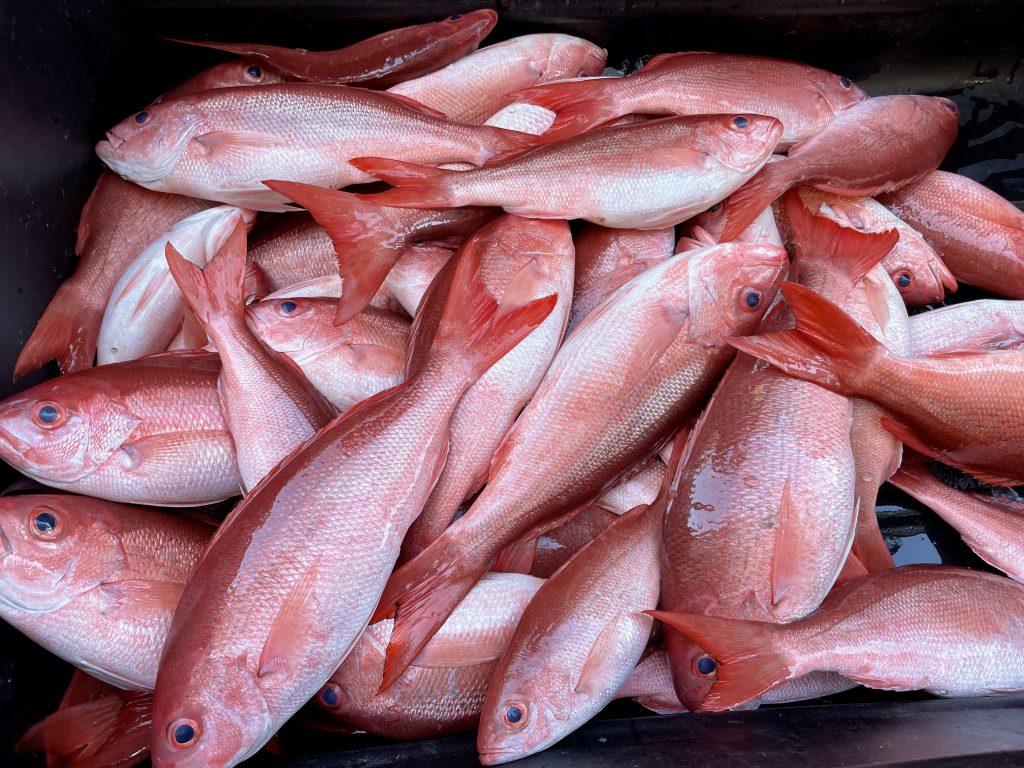 With the proper rig, you can catch multiple beeliner in one drop.

Beeliner are frequently found on the down-current side of structure, so be aware of where you position your boat to connect. There’s no need to keep the bait on the bottom. You’ll get snagged less if you reel up about 10 feet after each drop as beeliner frequently feed well above the structure.

You can sometimes chum beeliner right to the surface, where you can easily catch them on 10-pound-test spinning gear. This is a whole lot more fun than cranking them up on heavy gear all the way from a hundred feet down. Just a slight pinch-on weight is needed to slowly sink the bait in front of the fish, or in slack water maybe no weight at all. Watching them eat the bait adds a whole new dimension to harvesting these tasty reef fish and it’s a huge hit with kids.

Gearing Up For Beeliner and Triggerfish

Most triggerfish and beeliner are caught on heavy grouper/snapper rigs, but if you want to make sure to load up on them, it pays to go light. Triggers in particular have small mouths, so a little 2/0, 1/0 or size 1 circle hook will stick them a lot better than a jumbo 7/0.

Maybe rig one or two light rods for these great table treats and let the kids crank them up while the adults in the crew try to winch up some reef heavyweights on stouter gear.  (Sometimes getting the bite going on the smaller fish can trigger the bigger species, so you win both ways.)

Downsizing the standard slip sinker or in-line sinker rigs to 20-pound main line with one to two ounces of lead and a 30-pound fluorocarbon leader is one option.

Knocker rigs also work fine, with the sliding sinker above a bead and swivel to the leader and hook. Depending on depth, knockers with ½- to 2-ounce weights over 1/0 or 2/0 circle hooks will do the job. If you want to specialize in triggers, smaller size 1 hooks may get you more hookups, but are also likely to get straightened if you hook a grouper or snapper. 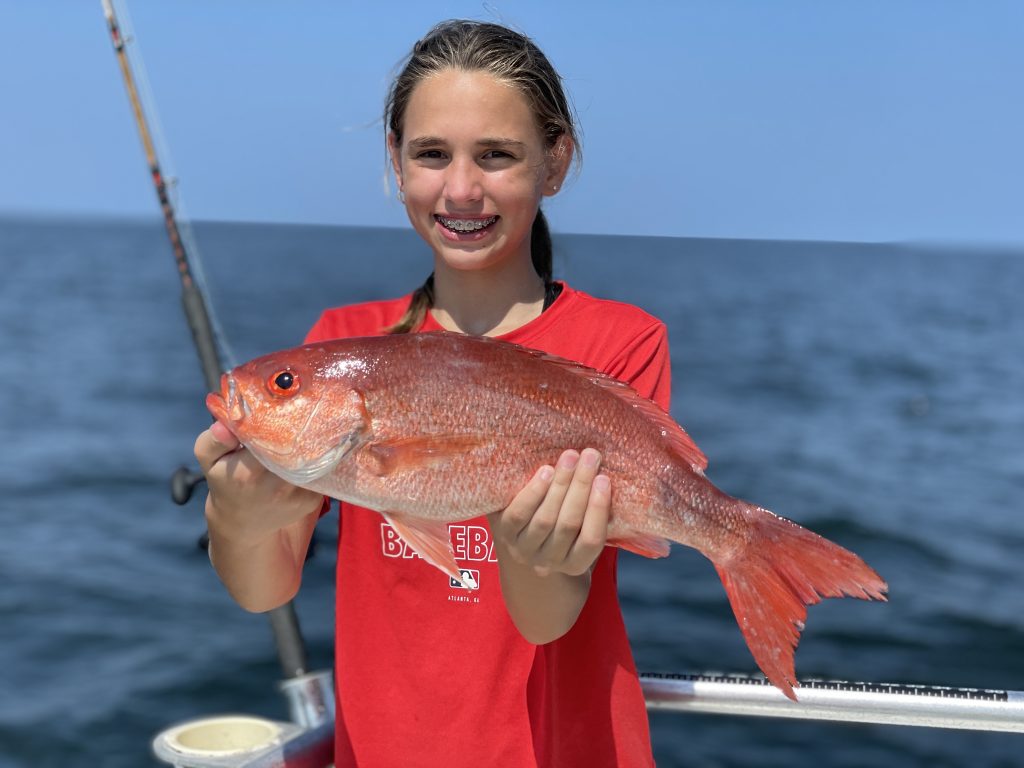 Among natural baits, fresh-cut squid strips are a favorite, as are bonito belly strips, pieces three inches long and a half-inch wide are just right for beeliner.

Also don’t ignore the chicken rig, which is two or more single hooks on dropper loops with a weight below. This allows you to feel the bite even if the fish doesn’t lift or move the weight, and also keeps the bait a foot or so off bottom, depending on leader length.

Circle hooks are required, remember, for all reef fish.  Also remember that you don’t “set” a circle hook if you want to catch fish. Just tighten up slowly until your rod tip starts to bend and then reel rapidly. The hook rotates into the corner of the fish’s jaw and the fight is on.

Among natural baits, fresh-cut squid strips are a favorite, as are bonito belly strips, pieces three inches long and a half-inch wide are just right for both species. Cut cigar minnows, sardines, LY’s and pinfish also do the job, but most who target these species say fresh squid works best.

While natural baits do the job on both triggers and beeliners most of the time, there are often periods when most of us are “fishing on credit” after the bait has been nipped off but we may not realize it for some time. Particularly in deep water, this wastes a lot of angling opportunities because you’re soaking a bare hook for extended periods.

Adding a couple pieces of FishBites EZ Squid, which is incredibly tough as well as loaded with fish-attracting scent, makes it more likely that every time you drop your rig to bottom you’re going to get a hookup. The bait comes in 12” x ½” strips and can be cut to any length you like. Again, a three inch piece is right for vermilions and triggerfish. 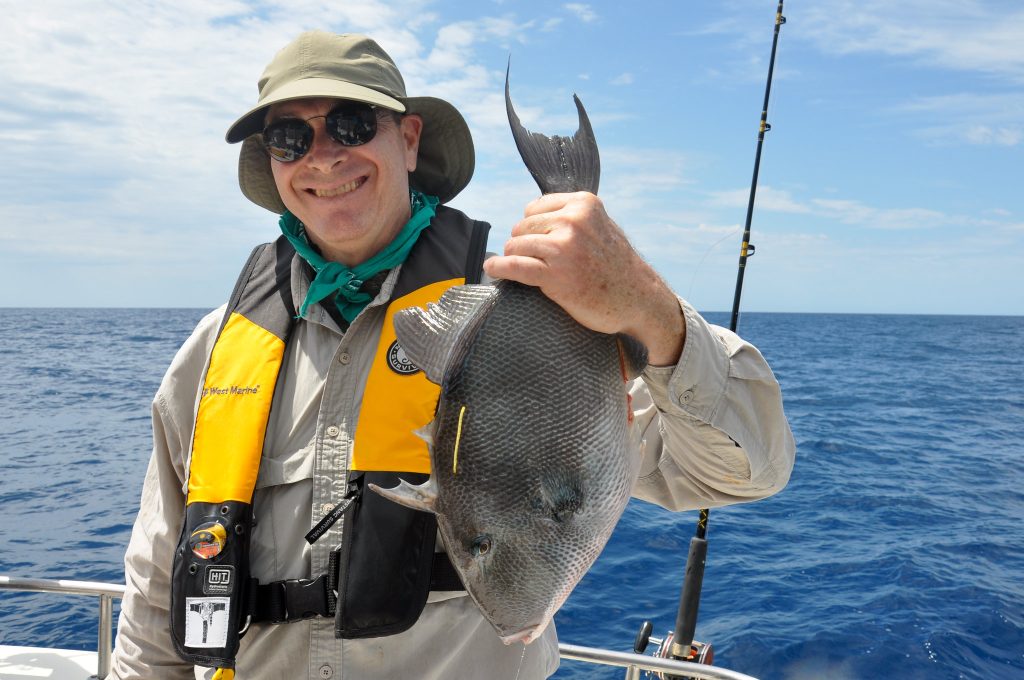 Adding a scented lure to your fresh bait will increase your chances of of landing triggerfish or beeliner.

The scent and flavor of FishBites was developed by University of Florida Marine Science professor Bill Carr. In some cases in the lab the formula proved to be more attractive to fish than natural foods, according to the company. It’s now a staple for anglers fishing the surf all along the Gulf and Atlantic Coasts, but also is highly effective when fished offshore.

The company makes both a fast-acting variety designed to dissolve quickly and spread widely in the water, and a slow-acting variety with mesh backing that dissolves more slowly but stays on the hook longer. They’re available in multiple colors.

Triggers are delicious, so fine and delicate they’re often used to make ceviche, However, cleaning is a bear—the hide is like armored leather.

Basically you need an extremely sharp 8 to 10 inch fillet knife with a relatively stiff blade to do the job, and of course it must be razor sharp. (Tip: If you don’t have a diamond dust honing stick or stone, buy one—they sharpen your knives three times faster and far sharper than any other devices.)

Punch the knife straight in behind the dorsal fin along the backbone and then, here’s the secret from pro fish cleaners, cut up and out, rather than down and in, to get through the skin. Cut through the skin all the way to the tail, then you can insert the knife up front and fillet the fish normally.

Both triggerfish and vermilion snapper have fine-grained, tender white fillets without any “fishy” flavor, so they can be prepared any way you like. Just adding a few pats of butter and broiling them is hard to beat.

Triggerfish and beeliner may not be marquee reef fish, but they definitely are at the top of the menu for anyone who enjoys tasty fillets.