Similar scenes unfold daily along the Emerald Coast every time a surf angler casts out a pompano rig for the first time. Confidence is low that an inch long piece of what looks like “dried bubble gum” will catch one of the most prized game fish on the beach. But they stick to the program as recommended, and after a short wait, get a bite and land their intended quarry. Shaking their head no longer in disbelief, but in wonder how that fish found his tiny artificial offering. Can fish smell bait, underwater?

The question begs not so much a matter of “IF” fish can smell underwater, but rather “HOW”.

Olfaction as scientists refer to the sense of smell, includes the ability of fish to detect scents called “odorants” dissolved in the water they swim through. The physiology of fishes’ ability to smell is shared with terrestrial animals in a rudimentary way. Rather though, water enters and exits through two pairs of pores, called “nares” that look a lot like nostrils on each side of the fish’s head between the mouth and eyes. 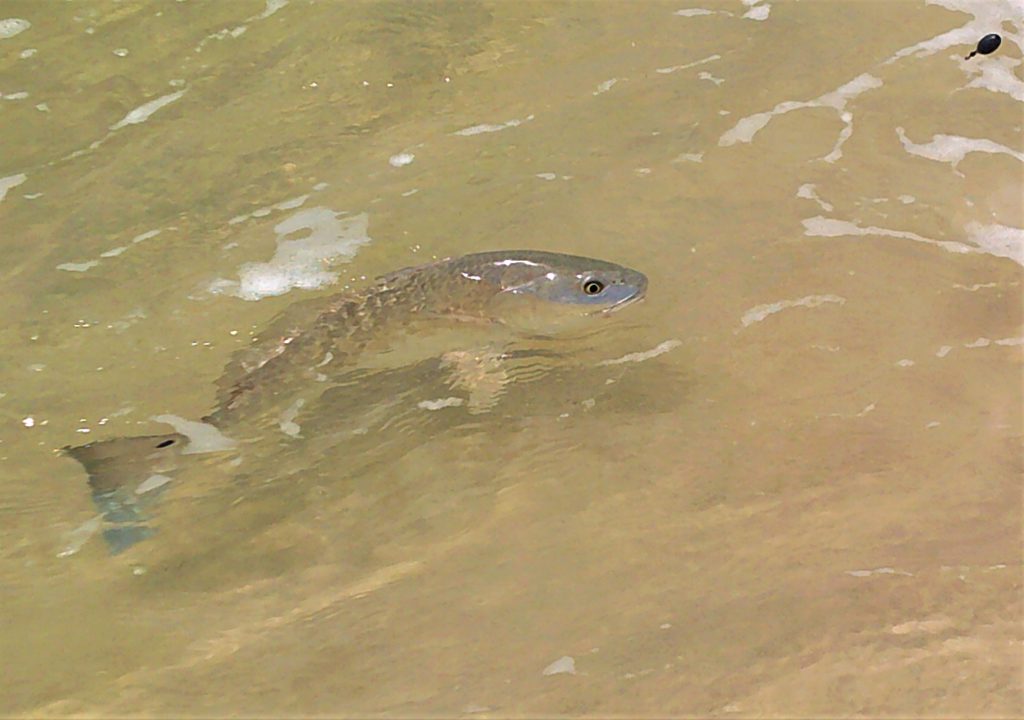 Red drum have two nares (nostrils) on each side of the head to aid in finding food in the surf and at night.

Water is the medium exposed to sensory nerve packs where scent stimuli are collected by these organs and transported via nerve cells to the nearby brain to be interpreted.

A chemical compound named Schreckstoff, which in German means “scary stuff” is released by some fish species when injured. It triggers alarm responses in individuals that peril is near, and serves to elicit immune responses to ward off infections and parasites as well. They literally “smell danger” and respond to it.

The configuration of olfactory sensors in the head of each fish species is a key to how they feed and protect themselves. Some fish species have even evolved with extra sensory organs called “barbels”, from the Latin ‘barbula‘ meaning “little beard”. These slender whisker like appendages are most often near the mouth, thus thought to aid the fish in finding food in low visibility conditions like poor light or high turbidity.

They are most often associated with various fresh and saltwater catfish species which have eight barbels. Members of the king croaker species in the family Sciaenidae may exhibit only one barbel, while black drum in the same family may have 12 or 13. Still, like other olfactory organs, barbels may do more than just help the fish smell food.. They are an extension of the total sensory network of the fish to literally smell or taste changes in their surrounding environment. 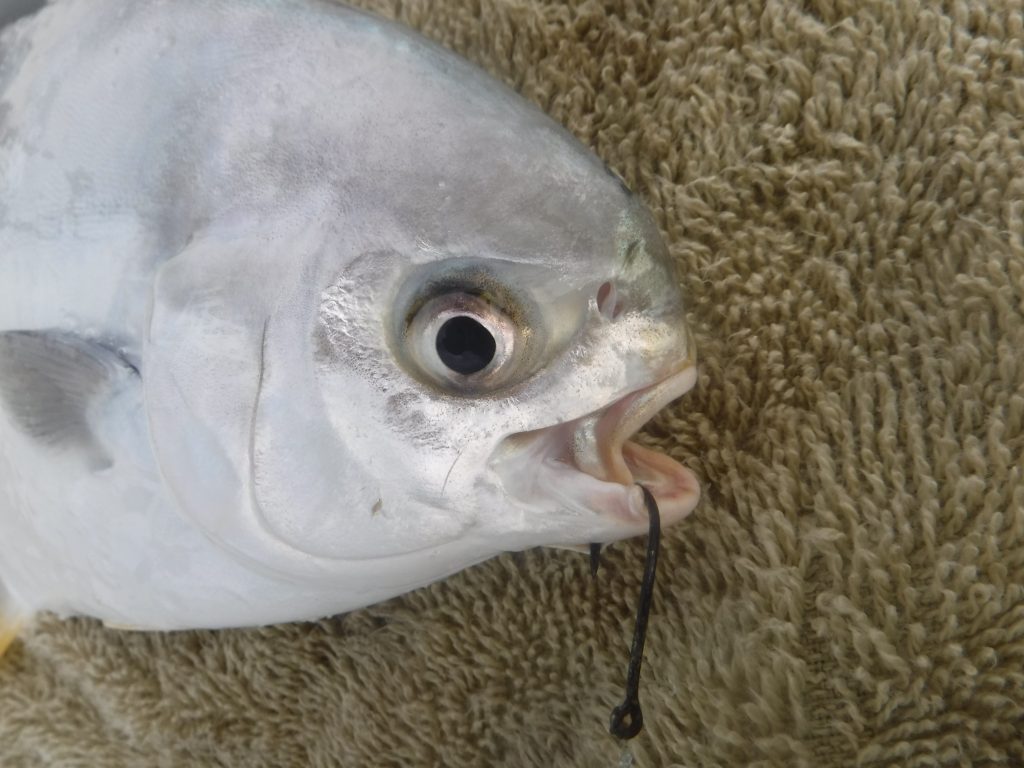 Pompano have large “nares” (nostrils) between the mouth and the brain to aid in finding food in rough surf.

Fishes’ senses are so keen they may detect not only food, but through pheromones find potential mates, or sense hazards nearby in the day or night. Scientific study has considered that fish may be able to smell or detect changes in the chemistry of the water itself, such as temperature, acidity, or trace elements through their olfactory senses.

The migration of salmon to the sea and back to spawn in the very same stream where they were hatched is well documented. Similarly, many saltwater species return yearly to spawn in the same waters, perhaps over the same reefs where they themselves were born.

Environmental variables may well affect the ability of fish to smell. Being cold blooded vertebrates, fish are well aware of changes in the water temperature (as well as dissolved oxygen and many other less obvious trace elements) surrounding them. 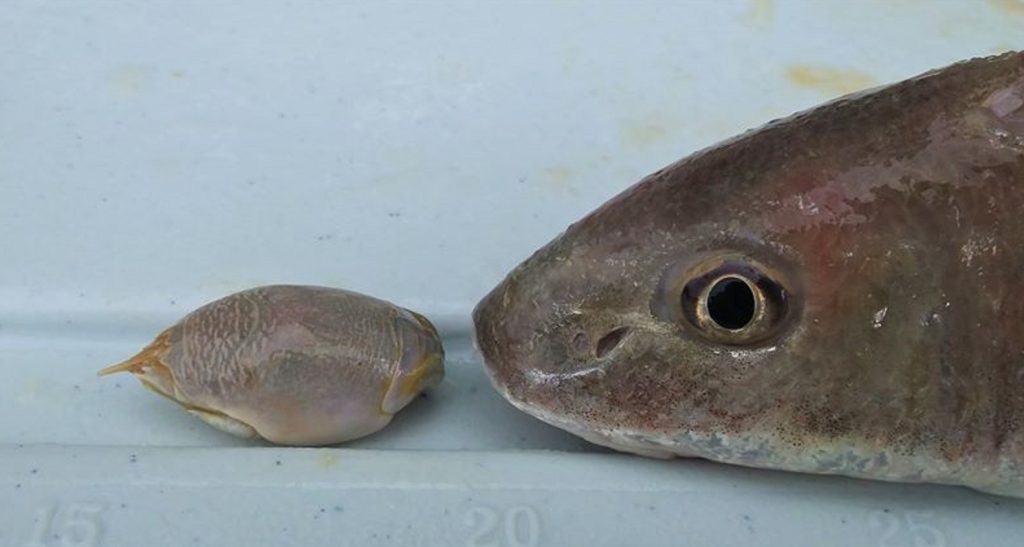 Natural baits like mole crabs “sandfleas” can be detected by the keen sense of smell of fish like Gulf kingfish “whiting”.

Fish also have a preferred range of temperature where most feeding and reproduction takes place. While there may be variations in the rate of chemical distribution through water due to temperature, there are certainly more profound changes in the metabolism of fish to sensory process the water itself simply because there is less need to. They do not eat when they do not smell.

Over 20 years ago a product was developed and marketed by renowned Marine Biologist Dr. William (Bill) Carr which revolutionized fishing. Carr’s discoveries debunked myths of so-called “stink baits” which do not disperse scent the same way in water as in air. After several decades of research into fish feeding behavior, Dr. Carr’s study led to the invention of Fishbites.

These concentrated, artificially replicated natural odorants literally attract and stimulate fish to feed. Since then over 160 of these flavored scent baits and rigs have been developed and used successfully worldwide. 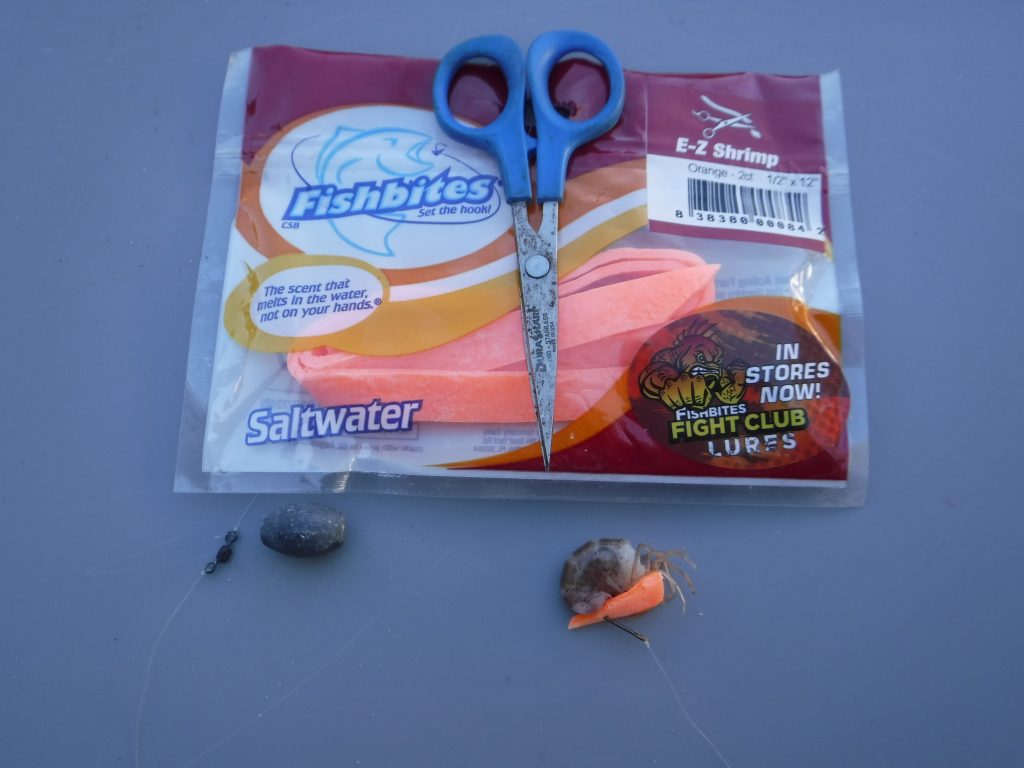 The highly effective combination of shrimp and Fishbites is well documented by surf fishermen.

Here in our quiet little corner of the globe, these products have revolutionized the ease and reach of surf fishermen by providing a durable product that consistently produces fish.

Matthew Isbell, former coastal surf guide and successful videographer, better known as the “Bama Beach Bum” spoke a bit about Fishbites impact on the sport stating “I just don’t see how surf fishermen can be successful, or were as successful without it. What did everyone do before it was invented?”

Indeed, anglers had to (and still do) use strips and pieces of cut bait (like fish, shrimp, or squid) that were subject to spoilage and “washing out”. Hardly the durable and long lasting non-refrigerated offerings we know and love now.

The current product line of Fishbites extends well beyond flavor strips and chunks for “set rig” surf fishing. It is commonly used offshore on drop rigs for snapper and other reef fish. In addition, products like Fight Club grubs are becoming popular for inshore fish like speckled trout, redfish and flounder. Anglers routinely targeting these species find the action, color and scent to be a killer combination and now even freshwater variations are available. 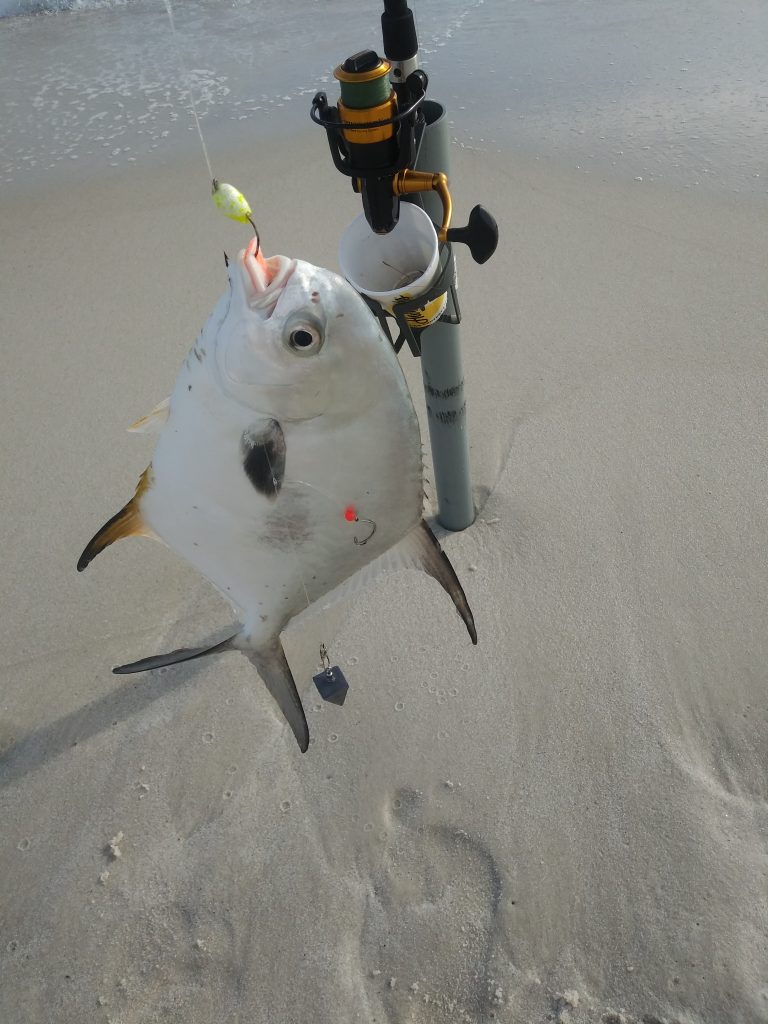 This permit found the shrimp and Fishbites in dingy water.

Often anglers have observed fish “shoppin”’ their lures, where there is a distinct curiosity in the action, but a lack of commitment to try and eat it. Perhaps smell is the final key that initiates this desired effect. How many times have you been in a situation of seeing multiple fish that act interested, yet reluctant to bite your offering?

That is until the feeding  activity of a single individual begins a frenzy. What happened in the water after that first fish stirred to action? Scent is often that unseen trigger that gets other fish to bite.