Choosing the Best Duck Hunting Kayak for Your Area

Choosing the Best Duck Hunting Kayak for Your Area

I’m sitting comfortably in my kayak on the water, and I’m looking for a certain target this dark, early, slow-to-lighten morning. However, unlike most of my many kayak trips, I don’t have a fishing rod of any kind. Instead, I have a shotgun and I have just placed a spread of decoys. It seems that my kayak, which is such a good craft for fish of many kinds, is also one of the best duck hunting kayak.

And as the morning comes, I tidy up the camo material which is spread over my kayak and me, and I see the first flight of ducks approaching. It’s time for me to get ready for hunting. Even super-shallow mud boats which can get hunters to many places couldn’t get where my kayak has taken me. I have this grassy, super-shallow back bay all to myself, and the ducks. 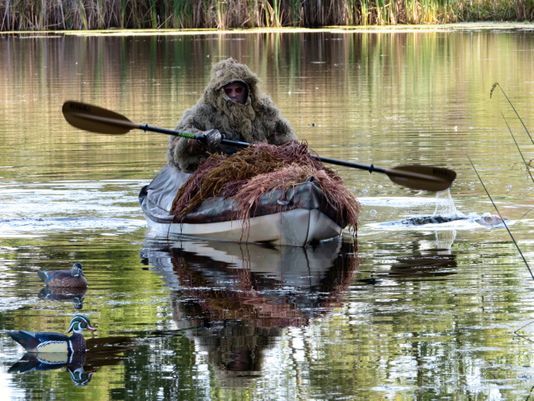 Get ready,  Boss! Kayaks allow hunters to reach ducks that no one else can.

What Type of Water Can We Hunt? 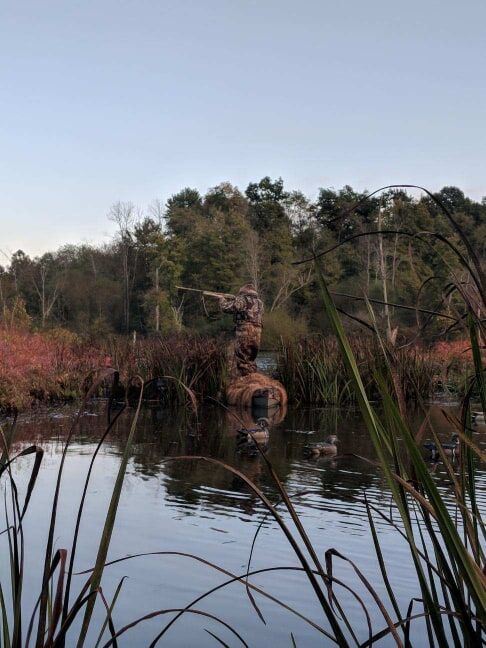 That is, they can access them if they have the right kind of boat. Much of this potential duck hunting water is very shallow, and even mud-boats can go in many places where the ducks can.

However, Kayaks can go in six inches of water or less, and if needed, a kayak can even be pulled across and over dry land to reach hidden duck-holding waters. Kayaks are the ultimate “all-terrain” boat for duck hunters.

Scott Kennedy is an experienced hunter and guide on the Gulf Coast and shared his view on how to use a kayak for duck hunting and the best situations for kayak use.

”The best places to kayak duck hunt are small bays, creeks, and ponds where boats have difficulty navigating shallow waters and where walk-in hunters can’t walk to,” Kennedy said. 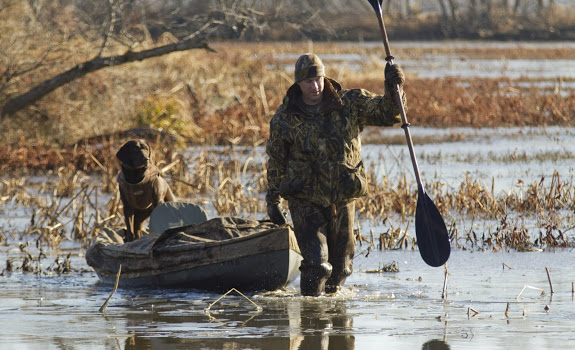 Of course, no matter what kind of water a duck hunter chooses to take a kayak, the paddle boat will allow retrieval of downed ducks much easier than bigger outboard powered boats. After the shot is made, simply paddle the kayak to the bird and pick it up. If a dog is used, most water dogs find leaving and entering a kayak much easier for everyone involved than a higher sided, larger powerboat.

Amount of Gear We Can Take

It would be a lie to say that a duck hunter can carry the same amount of gear in a kayak that can be carried in an outboard powered boat. Still, most kayaks can hold a hunter and a couple of hundred pounds of gear with no problem.

Most sit-on top kayaks have plenty of room for a hunter with gear up front, and even a good-sized lab in the back. Some kayaks can be rigged to have two hunters aboard. By the way, most water dogs take riding and working from a kayak quite well.

As far as the material used to camouflage a duck hunting kayak, it really doesn’t take that much.  The whole idea is to break up the smooth and unnatural outlines of the kayak, and a few cut reeds or branches from the area will work to do that. A sheet of camo cloth draped over the decks of the kayak will cut the reflection off the plastic surface.  Hiding a kayaks is much easier than trying to cover a full-sized duck boat. 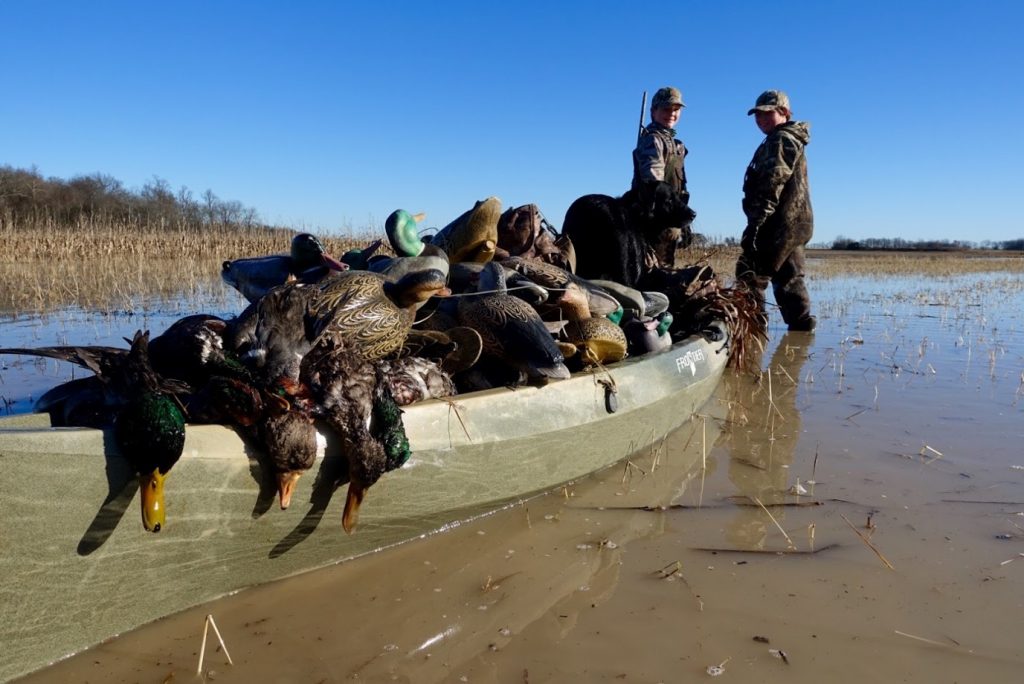 There are lots of ducks that kayak hunters can reach that other hunters can’t.

“I’m able to carry about three dozen decoys on my kayak, and then I pull a JetSled behind me that allows for another three to five dozen decoys.  I always bring a blind bag with extra shells, gloves, face concealment, and most importantly, coffee and breakfast. I do not use a dog. Being able to move around in the water with ease with kayak allows you to get away without a dog.”

One of the greatest parts of kayak duck hunting is being able to shoot birds without having to build a fancy boat blind or having a big mud motor,” Kennedy concluded.

Choosing the Best Kayak for Your Hunting

Most duck hunters find that a sit-on-top kayak works best for hunting. The open design of a SOT kayak allows hunters to move seating and even remove seating for a full lay-out arrangement, or modifying storage areas for decoys, guns, gear, and dogs quite easily. 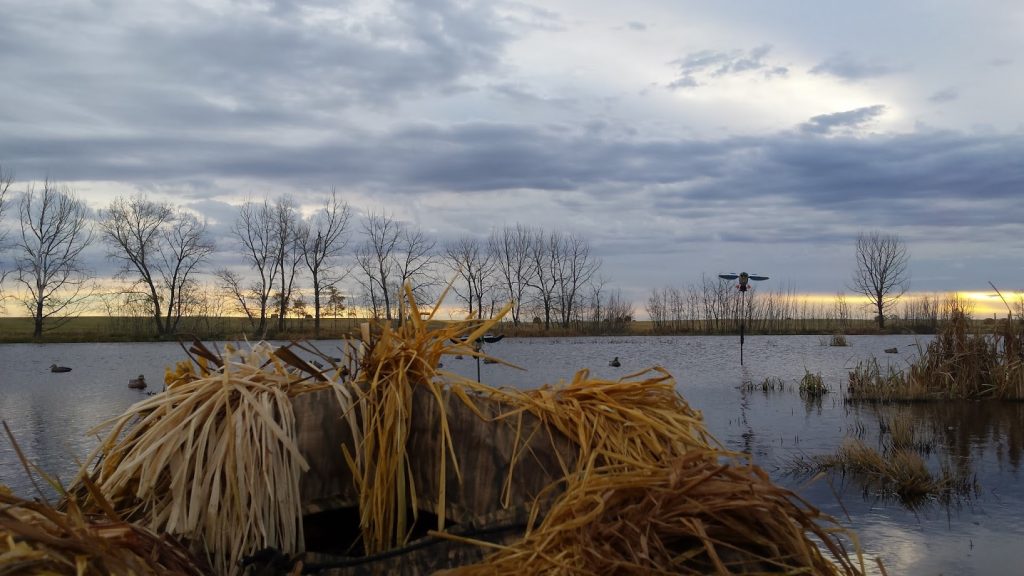 Getting into the right spot is much easier with a kayak.

Just about any kayak that works for fishing duties will also work just fine for duck hunting. However, some kayaks are designed with duck hunting in mind, and these kayaks have features that fishing-only kayaks don’t such as gun holders and tie-down points for camo material to be attached. Many of these kayaks designed for duck hunter come in camo pattern finishes which make concealment a lot easier for hunters.

One of the specific kayak brands which really shines when it comes to duck hunting is the line of boats from NuCanoe. These kayaks are first-rate fishing boats, but they make duck hunting a whole lot easier than most kayaks.

NuCanoe offers several options for duck hunters.  One of the best options offered for duck hunters is a very effective and easy to use layout blind in camo pattern.  This camo soft material blind offers easy access into and out of the kayak, and it gives good coverage for the boat, hunter, and dog. Nucanoe even offers camo pattern seat covers for their kayaks.

Gun bow mounts are offered for Nucanoe kayaks. These allow secure, safe storage and travel positioning for duck hunters’ guns. Positive and secure placing of guns while paddling or towing the duck hunting kayak is very important. This keeps guns safe and out of water and mud while still allowing quick and easy access. 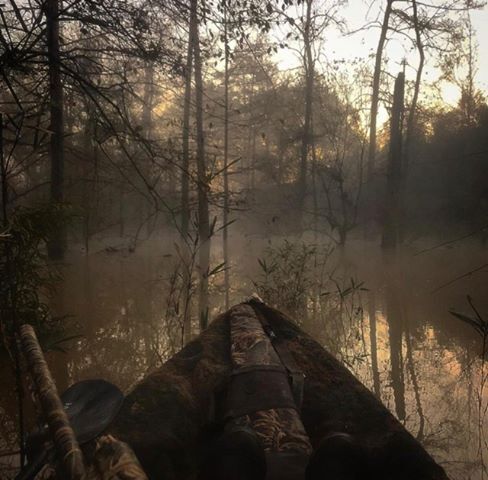 NuCanoe kayaks, like many other kayak lines, can be bought in basic camo patterns as well as a wide range of other colors. One of the best models of NuCanoe kayaks for duck hunting use is the Frontier 12. This very stable boat can be rigged as a tandem. Two hunters can hunt from it, and it can carry 650 pounds of load.  This 40-inch wide kayak is self-draining, and it can go in four to six inches of water.  It can even be rigged to use an electric motor instead of paddles.

Of course, one of the best things about NuCanoe kayaks used for duck hunting is that rigging the boat for hunting is quick and easy, and after duck season has ended, it is just as easy to de-rig the hunting boat and convert it back into a fishing kayak again. 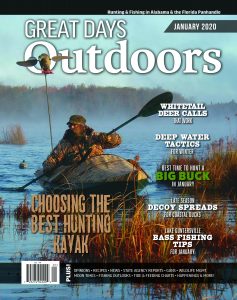 This This article first appeared in the January 2020 print issue of Great Days Outdoors Magazine. For more great hunting and fishing content for the deep South, subscribe to Great Days Outdoors print and digital editions or click the image to download this issue.