How to Catch Blue Marlin in the Gulf of Mexico

How to Catch Blue Marlin in the Gulf of Mexico

Blue marlin are what fisheries scientists call “obligate ram ventilators”, which means they have to swim constantly to move oxygenated water over their gills—unlike a redfish or a red snapper, they can’t pump their gill plates to breathe. Not surprisingly, this results in them covering a lot of territory. So when you consider how to catch blue marlin, any offshore angler knows they can be here today, 40 miles away tomorrow.

Finding them in the Gulf of Mexico, 1,000 miles from east to west and 580 miles from north to south is definitely a challenge, especially in a one-day trip.

According to a study by the University of Miami School of Marine Science, billfish spend up to 75 percent of their time within 50 feet of the surface that can make them vulnerable. That means surface conditions are critical, even though they sometimes dive to feed and can temporarily endure much colder water in the depths.

Blues to around 300 pounds mostly eat small (under 10 pounds) tuna including skipjack, little tunny and blackfins, as well as mahi, rainbow runners, squid and other smaller species. Bigger fish seek bigger prey—that rare grander may gulp down a 50-pound yellowfin! 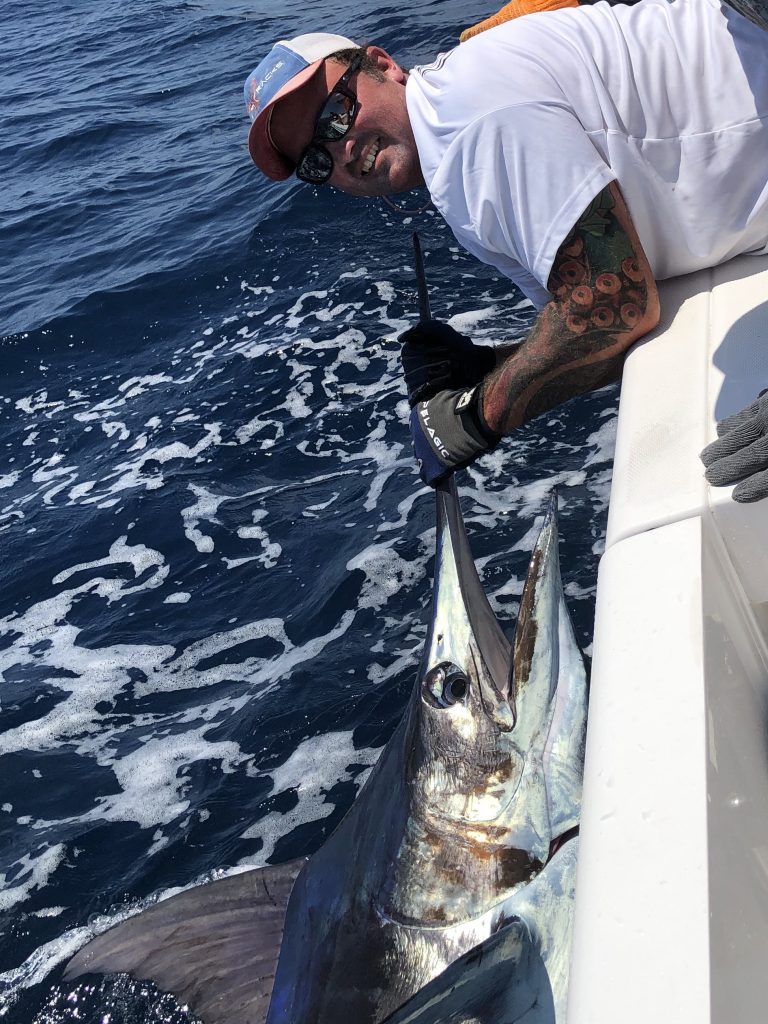 Understanding weather, as well as water, conditions is key to landing blue marlin in the Gulf of Mexico.

The tunas, mahi and other species gather where the conditions for the base of the food chain– water temperature, oxygen level and water clarity–make for easy living. So do the marlin that eat them.

Finding the fish often means finding the prey species, which is why a service like Hilton’s Realtime Navigator is becoming a standard feature on many top sportfishing boats. Founder Thomas Hilton has been monitoring ocean conditions on a daily basis for over 17 years.  His system makes use of the layering capability of satellite photos to record various parameters offshore daily.

“We map the most recent up-wellings and down-wellings, water temperatures, chlorophyll levels, which predicate water clarity-, ocean eddies and currents, wind direction, salinity levels, bottom structure, Fish Attracting Devices (FAD), oil and gas rigs and the actual daily movement of drill ships and other more-or-less permanent structure out there,”Hilton said. “Where the most favorable conditions intersect, the angler has the best chance of finding billfish.”

Hilton said that one of the most important functions his service can provide marlin fishermen is up-to-date, detailed water temperature offshore so they know the best time to catch marlin.

“The marlin are going to move to find the upper 70’s temperature as the lower end of their comfort range, and that trumps everything else in spring and fall,” Hilton said.. “In summer, on the other hand, the water in some areas actually gets too warm for them, in the high 80’s/low 90’s, so the marlin (and the fishermen) are looking for the coolest water they can find.”

The conditions are in constant motion in the Gulf, but Hilton said that his system allows captains to monitor the trends and project where things will be right on their fishing days.

“If you see a temperature break that’s maybe meandering east a few miles a day, that’s likely to continue for some time, so you can plot a course for where it will be on your trip, rather than on where it was in the middle of the week,”Hilton noted. “It saves fuel, it saves time and it saves money.”

The Hilton system includes a navigation tool, as well. Once the angler finds the ideal set of conditions he wants to fish, he can quickly draw the nav route from his home port to that location without ever leaving the program. There’s an additional function called the “Trip Planner”, which allows the user to set up to 15 waypoints and save the route, allowing an accurate estimate of running time verses. fishing time as well as fuel consumption for the day. 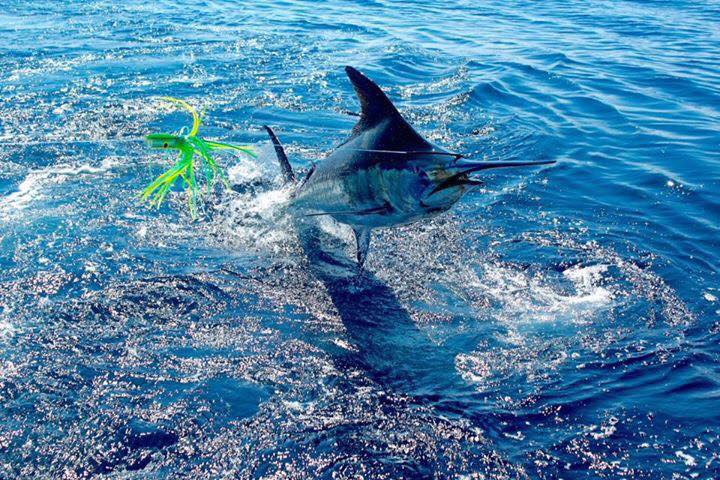 Hilton said that the Gulf Loop Current is the primary current in the Gulf of Mexico, entering via the Straits of Yucatan and hitting the continental shelf just east of the Mississippi Delta. It then curls east to follow the shelf past Destin before turning south about 100 miles offshore of Florida’s “Big Bend” area. This flow of warm, clear water exits the gulf around the south end of the Florida Keys, then flowing north between the state’s east coast and Cuba to become part of the Gulf Stream.

But the massive water motion of the Loop also creates many unnamed whorls and sub-loops, and these are often great spots to find gamefish, defined by water color changes, rips and weedlines. Hilton’s system helps anglers locate these currents, as well as many other fish-attracting conditions.

Even all this knowledge rarely makes billfishing easy. Fortunately, there’s an ace in the hole in the Gulf of Mexico.

Where To Go Marlin Fishing – Structure

There are thousands of fish-attracting oil and gas rigs found every few miles offshore along the continental shelf, and in some cases well beyond. Recently deployed FAD’s,, now add to the bonanza. Fisheries scientists say fish densities are 20 to 50 times higher around the platforms and FAD’s than in open Gulf waters, so they’re clearly a major part of the offshore fishing equation.

“The structures on the edge of the continental shelf and beyond are fish magnets,” Hilton said. “They can sometimes ace all the other parameters, because they have what the gamefish want to eat almost all the time.”

“There are a lot of structures out there and not all of them are good all of the time. We recommend you find a structure that’s at 600 feet or beyond with as many of the other favorable parameters as possible,” Hilton said.. “A structure that’s got a good current flow, upwellings, clean water and the right temperature is usually going to produce, while one without any of those conditions or only one is rarely going to be a hotspot.”

Oil and gas rigs create favorable conditions for marlin fishing, so knowing where to locate them can help anglers, tremendously.

Those who regularly fish the oil structures also note that catching billfish near them is often a live bait regimen, since there’s so much natural food in the water. Slow-trolling a live bonito or blackfin around the structures frequently results in hookups, particularly on those where there are no other boats in sight.

Hilton’s released an updated website in April of this year with many new user-friendly features as well as ties to five new satellites providing up-to-date parameters on offshore waters. The RT-NAV app allows customers to download maps with all the favorable conditions to the smartphone for on-the-water navigation.

Hilton also noted that the H.E.L.P. look-back feature allows users to see what the parameters were last year and the year before, so that they can make a good estimate of where they might find fish at the same time this year.  He calls it “fishing with a rear-view mirror,” a sort of electronic logbook.

And as always, Thomas Hilton himself is always available on cell-phone to talk his customers through the program as well as provide a bit of seasoned advice on how to catch blue marlin and where the fish are likely to be biting offshore.

How To Catch Blue Marlin

Captain Adam Peeples of One Shot Charters in Fort Walton Beach, Florida, regularly charters for blue marlin and swordfish in the Gulf of Mexico and offers these tips for anglers who want to get hooked up:

Peeples has caught and released blues to an estimated 800 pounds in his nine years of marlin fishing the Gulf of Mexico.