How To Catch Redfish From The Beach | Great Days Outdoors

How To Catch Redfish From The Beach

How To Catch Redfish From The Beach

The emerald water just off the white sand beach of Coastal Alabama was perfectly clear in the sunshine. A pair of retirement-age snowbirds from Wisconsin walked along the beach enjoying the warmth of deep South Alabama when they saw something that caused them to walk faster along the beach.

A large patch of “discolored” water with a flock of screaming and diving birds over it lay just off the beach. The visitors wanted to see what had “messed up” the gorgeous Gulf waters.

The northern visitors got closer to the unexpected action. They soon realized what was occurring. Hundreds of big fish that were chasing a school of smaller baitfish caused the golden color of the water.

The angler was smiling. When asked by the northern visitors what was going on, the angler told them, “These are bull redfish; they are lots of fun!”

The older man from Wisconsin was intrigued. “Can you catch them off the beach like this often?” he asked.

I laughed and said, “Nearly every day, somewhere here along Alabama’s beaches.”

As the older couple walked away after watching me land my 20-pound bull redfish, the gentleman from Wisconsin said, “I think we need to go by the bait and tackle shop—right now!”

Anglers can find some of the world’s best big bull redfish very close to the sand and they are never shy about biting, as long as you know how to catch redfish from the beach. 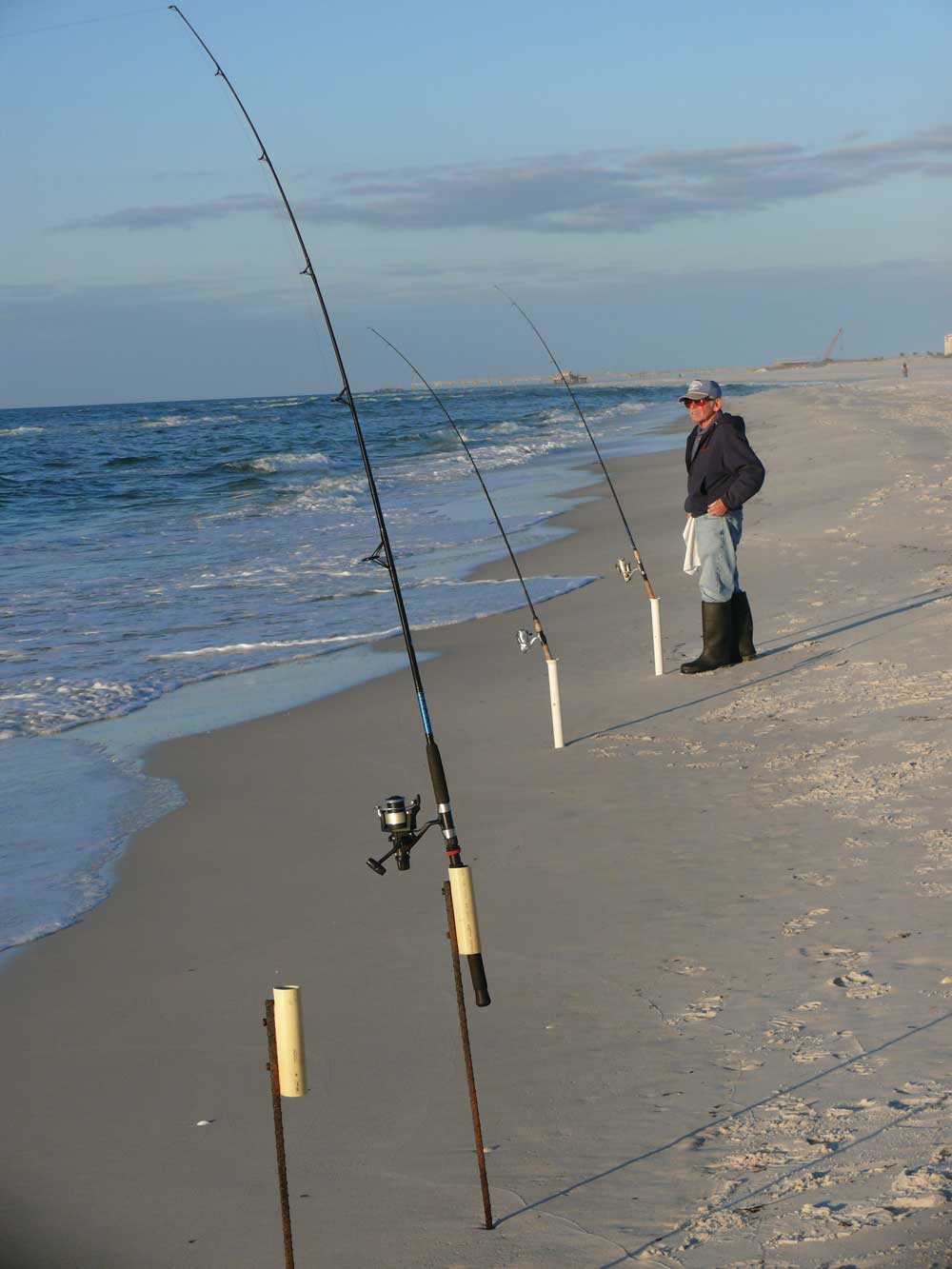 Beach fishing at the Gulf is a splendid thing. Photo by Ed Mashburn

Why Are They So Close?

She says, “the reds have just recently come off the spawn and are close to shore replenishing their fat stores. Around October is their peak spawning time, but a few will go a little later. Not only are they chasing anchovies, but menhaden make up a big part of their winter diet. Menhaden are small, oily fish that are good for keeping up the reds winter energy.”

When the big reds find a school of baitfish, they aren’t shy about working it. In fact, a bunch of big bull redfish feeding on smaller fish is one of the most impressive sights to be seen in the Gulf. Big bull redfish will literally make the water boil with their vicious feeding, and it’s not hard to see the feeding reds from a long distance.

Sometimes, the big reds will be right in the surf feeding, but most of the time they will be from 50 to a couple of hundred yards offshore. At any rate, very often they are within casting distance for beach-bound anglers.

How To Catch Redfish From The Shore?

One of the best things about bull reds, at least as far as we anglers are concerned, is their willingness to hit just about any kind of bait put before them. Any lure that is remotely close to the size of baitfish being chased will work.

Top-water plugs are loads of fun to throw over feeding bull reds, and the reds will work hard trying to get the top-water plug into their mouths. Also, any sort of mid-water swimming plug will work, too.

However, the simplest and often most effective lure for catching bull redfish is a white or chartreuse one- to two-ounce jig. Most anglers can cast these jigs a long way, which is good when the reds are working off the beach. And the single hook on a jig is much easier to remove when the big red has been caught and is ready for release.

A soft plastic trailer on the jig can make a big difference on strikes some days. Most of the time, the reds don’t really care about color; they just want to eat.

It’s possible to hook and catch big bull redfish on fairly light tackle. This light tackle— anything less than 20-lb test line and rods and reels heavy enough to handle big fish—can be loads of fun. But the super-light tackle means the bull reds end up being hooked and fighting for a long time. This can be hard on the big fish.

It’s better to use heavier gear that will allow the angler to work the fish back to the boat or beach in five minutes or less. Any kind of reel that will hold 200 yards of 20-lb or heavier line will work. Just as long as the reel’s drag system is good.

Big bull redfish are not speedsters like big king mackerel. However, they will pull drag for a long distance, and they will do it time after time after being hooked.

The big reds will not be feeding on top sometimes, but they are still around. At these times, especially if the angler is in a boat, it’s a good idea to slow-troll a big deep-diving plug like the Stretch Series of Mann’s lures about a hundred yards off the beach.

Quite often, the big bull redfish will be holding deeper. When the wobbling plug comes by, they will smash it. 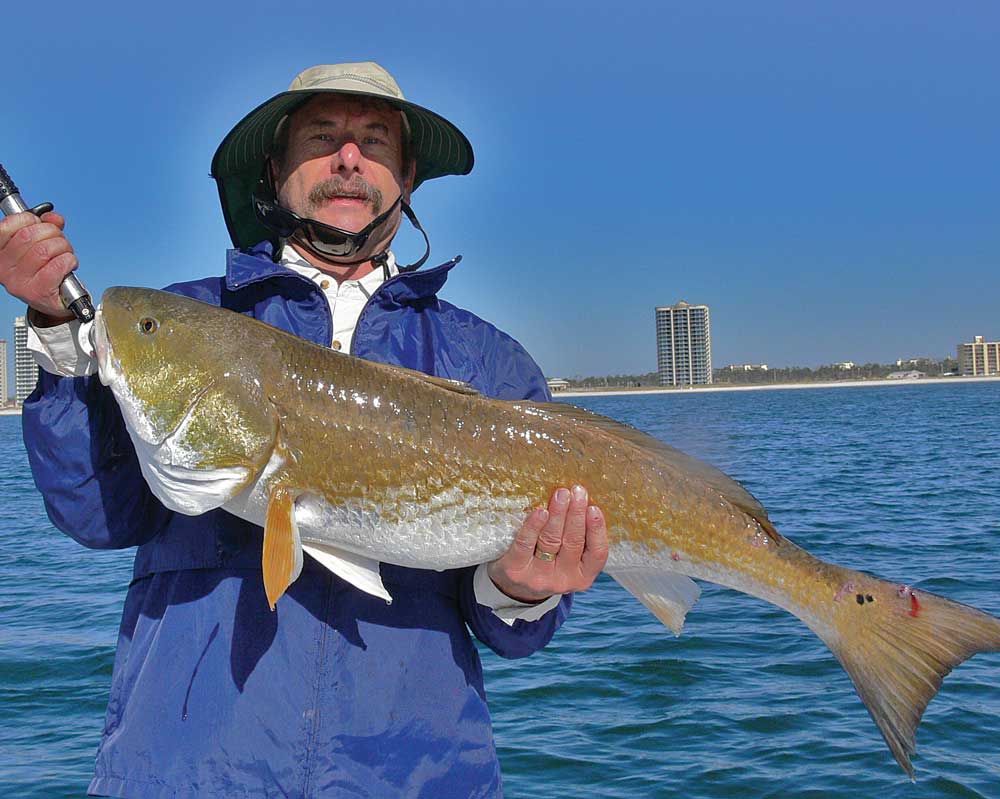 Bull reds are too fine a fish to be caught just once. Photo courtesy of Ed Mashburn

Where Are Good Places To Find Them?

Now, this is the hard part about catching big reds. The schools of bull reds don’t stay in any one place for long. They also don’t visit a particular spot all of the time. Several big schools of bull redfish can be working in lots of places along the Alabama Coast from Florida to Mississippi state lines. Anglers just have to find the fish.

For both boat anglers and shore-based folks, the easiest way to find the bull reds in the surf is to look for birds diving into the water for baitfish.

This time of year, any big fish activity that drives bait to the surface where it can be worked by birds is almost certainly caused by bull redfish. So, find the birds and you’ve found the reds.

There are a few traditionally solid places for shore-based anglers to start their bull redfish search. The jetties and the area around Perdido Pass very often hold schools of bull reds, and it’s not uncommon for anglers to find some nice smaller slot-size reds along the rocks, too.

The pass where Little Lagoon empties into the Gulf is a good place for shore anglers to find feeding bull reds. This is also a good spot for kayak anglers to put in and paddle out a couple of hundred yards to look for reds.

A place for shore-based anglers to find some hot bull red fishing is off the Gulf State Park Fishing Pier. Karon Aplin says of the pier, “When they’re there, they’re really there!”

Fishing for the big bulls off the pier offers anglers the chance to observe the approaching schools of massive reds. Then, to cast into the feeding melee. Of course, it’s rare to have the entire pier to ourselves. That being said a little consideration of other anglers and what they are doing is always needed on the pier.

“Almost always, when a large school of bulls sweeps into the pier area, there are enough of them to go around for everybody to have a chance at hooking a big redfish.”

Almost always, when a large school of bulls sweeps into the pier area, there are enough of them to go around for everybody to have a chance at hooking a big redfish.

For boat anglers, now is the time to run the beaches to find the big bulls. All a boat angler has to do is exit either Perdido Pass or Dauphin Island and look for diving birds. Don’t run the boat too close to the feeding reds. This may cause too much noise will spook them and kill the bite. Hold off a good distance and cast to the feeding frenzy.

One very reliable place for boat anglers to find bull reds year-round is Dixey Bar. It’s located just out of the Mobile Bay Pass between Fort Morgan and Fort Gaines.

Big reds stack up on the drop-offs of Dixey Bar, feeding on small fish and crabs as they are swept along by the strong currents. Fishing a falling tide on the Gulf side of Dixey Bar is just about the most reliable place in the world to hook up with a big bull red.

Some Final Information From Karon Aplin

Bull redfishing can be so hot and exciting that it seems there really isn’t a way it could get better. However, the bite is better at times than others.

Karon Aplin tells us, “The best bull redfish bites usually occur when the tide is moving. It doesn’t matter too much if it’s rising or falling. However, when fishing the passes, falling tides are always the best.”

When asked about the population of big redfish in Alabama, Aplin says, “I haven’t seen any numbers from this year. However, based on last year our bull redfish population is reasonably healthy off the beaches. There are enough bull reds for everybody to enjoy them.”

Anglers fishing Alabama waters can have three redfish per person each day. The slot size is 16-inch minimum to 26-inch maximum length. Anglers are legally allowed to have one oversize redfish as part of their three-fish limit. However, the big bull reds are not nearly as good for eating as the smaller fish. Anglers can still get a trophy mount of their big reds. Simply take a good full-length pictures and get a length and girth measurement. Most taxidermists can make a gorgeous fiberglass mount of the trophy that will look even better than the real fish.