You can turn on any deer hunting television show and find personalities giving ozone generator for hunting reviews that promise that the technology is a “game changer”. Do you believe it? I, personally, was a skeptic, so I set out first to understand, how does an ozone generator work? Once I grasped the science behind it, I had the confidence to take the technology into the field and put it through the harshest conditions possible. The goal was to answer the question once and for all, “Do portable ozone generators work for hunting,” and “what is the best ozone generator for hunting?” Here is the detail on three specific hunts over two years of testing and my results.

How Does an Ozone Generator Work

Do you really want to know how an ozone generator for hunting creates and emits ozone? I personally could care less. What I am interested in is how does an ozone generator work to eliminate, mask, or otherwise prevent my quarry from smelling me.

Nick Andrews of Scent Lok offers up an interesting analogy that is enough explanation for me. “Think of scent like a train, where each different scent is a different configuration of box cars. A human may be an engine with 4 box cars whereas an apple may be an engine with 6 box cars and a caboose. Animals are capable of storing thousands of unique “trains” of scent in their brain,” Andrews said. 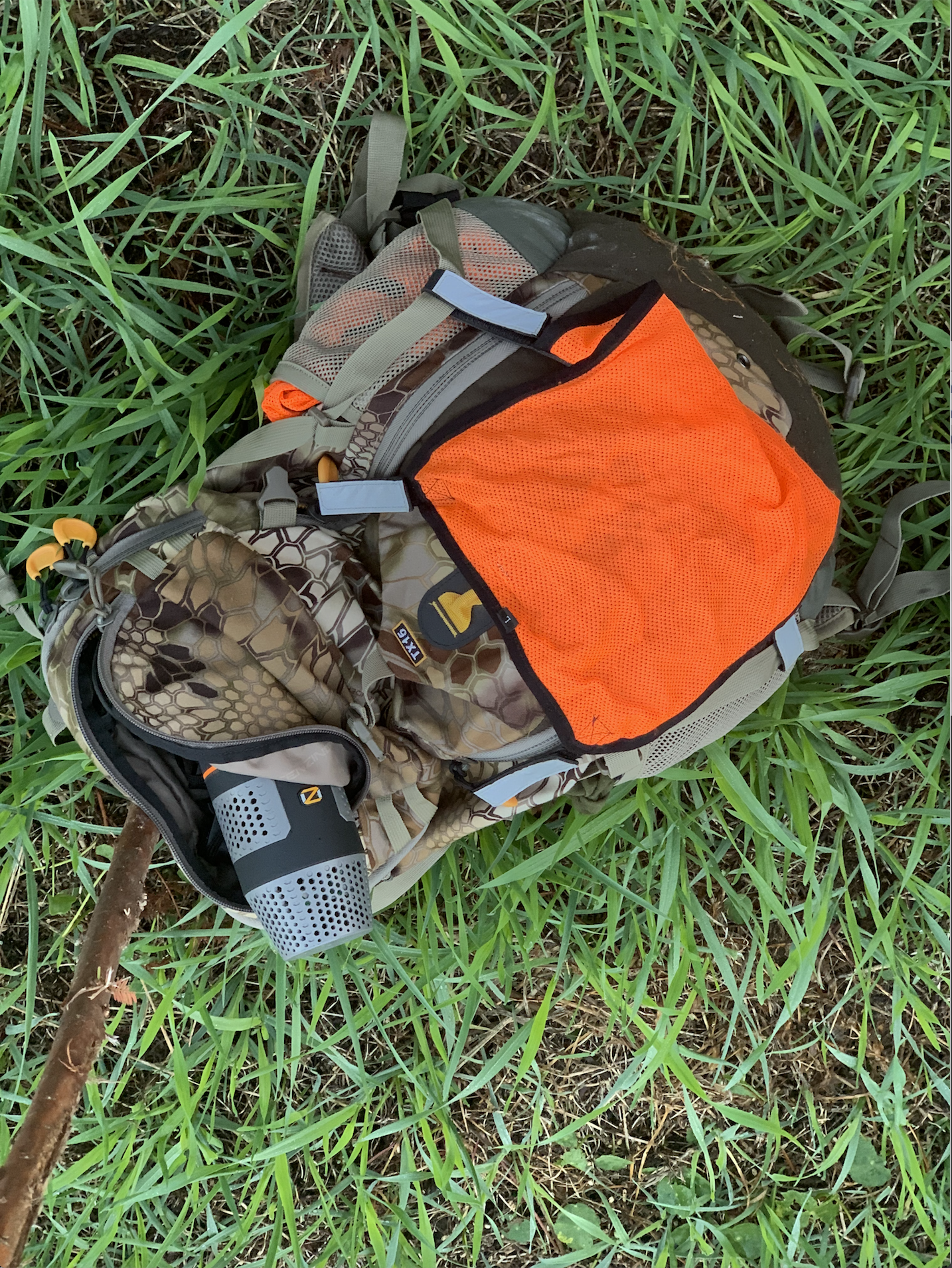 The portability of the ozone generator made testing no hassle at all.

So how are these scent “trains” affected by when ozone hunting?

“Ozone attacks the scent “train” and disrupts the animals ability to process the scents they are familiar with. The ozone actually breaks them apart, like separating the box cars, rendering that scent unrecognizable.” Sounds good, but how does it work in the field?

The morning of November 11, 2018 morning brought a strong cold front to North Florida. My wife Stephanie and I were celebrating our anniversary with a babysitter for our newborn and some crossbow hunting during Florida’s archery season. I had a ground blind set up in an oak flat that funneled deer onto 2 trails that were within bow range. I had been getting pictures of several mature does in this area and some small bucks so we decided we’d give this area a morning hunt to see if we could put a doe in the freezer and get Stephanie her first archery season kill.

There was only one problem, The strong North winds would blow our scent directly to the trails and bedding areas that we hoped the deer would come down. In any other situation I would never have considered hunting here but this was the perfect opportunity to test the effectiveness of an ozone machine for hunting. I was breaking all the rules. 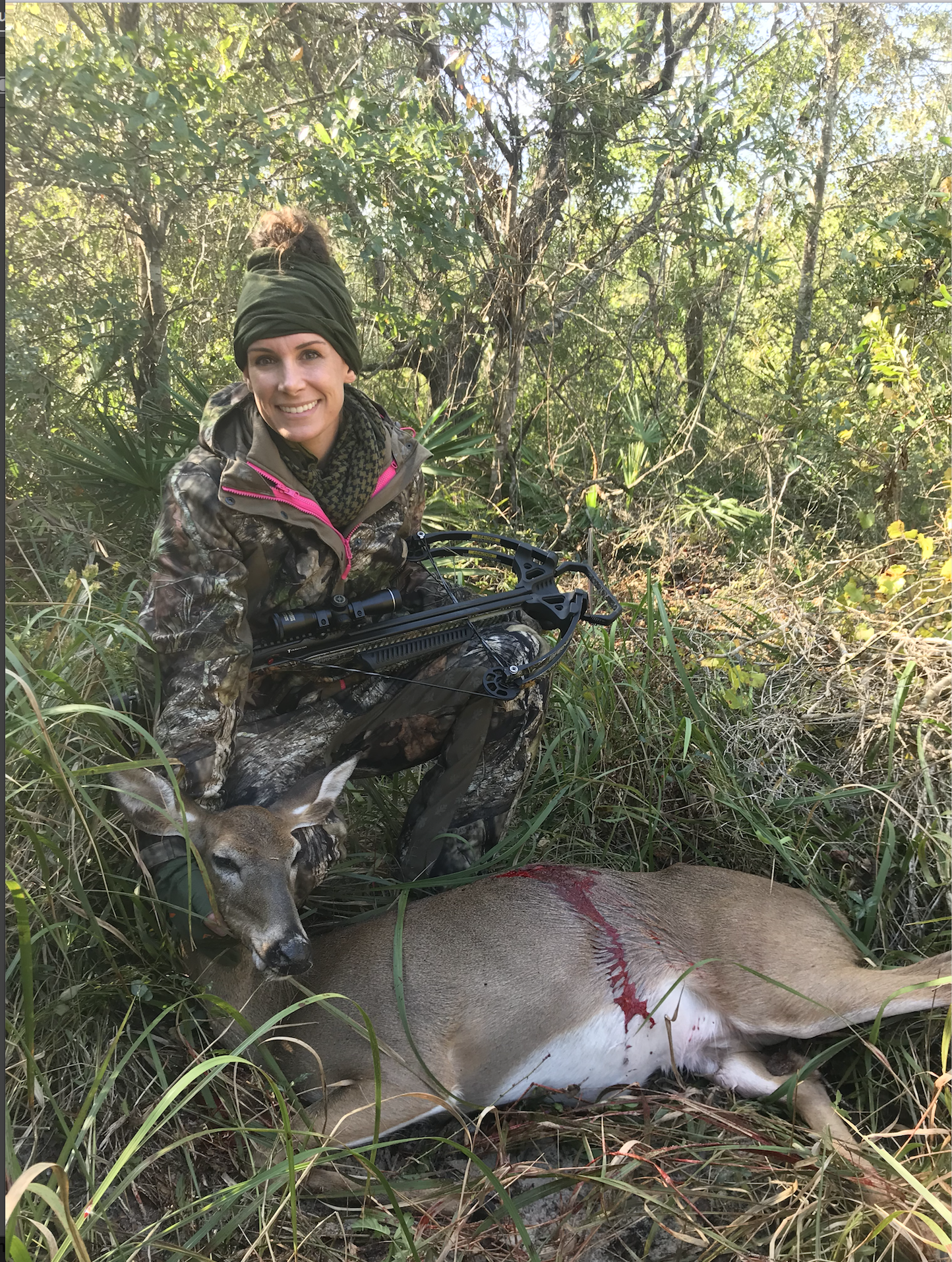 This mature doe was completely unaware of human presence while being only 31 yards away and directly downwind of two adults in a ground blind. .

As the sunrise cleared the treetops we caught our first glimpse of movement. The familiar shape of a deer moving its way west to east in front of us sent both of our hearts racing. I cautioned Stephanie to slowly get her crossbow into position as I ranged the shooting lane one more time. “31 yards, take your time and squeeze the trigger” I whispered as the matriarch doe poked her long neck into the opening.

As the deer came into view, I watched her pick her head up, sniff the air as if she had caught wind of something just slightly off, and then she put her head back down to browse. At this moment Stephanie sent her bolt and I watched as it impacted a little high and back, but nonetheless what would prove to be a quick killing shot.

Was this enough to make me a believer? It was definitely impressive, but maybe we just got lucky. Maybe given another 30 seconds she would have figured us out. It was still too early for judgement. The rest of the 2018 season would prove inconclusive for testing the ozone generator. Frankly, I was still set in my ways and I didn’t hunt stands with the wrong wind any more that season. 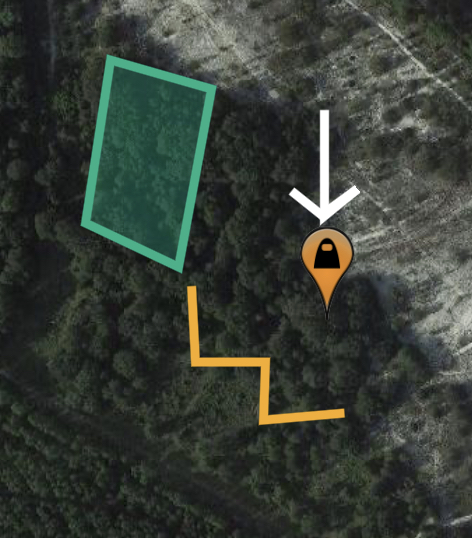 The green block is a known bedding area. The orange line are the common trails from bedding to feeding. The white arrow is the direction of the wind on the morning Stephanie took her doe. Without the ozone generator, we wouldn’t have even considered hunting this ground blind.

There is a hill on the property I hunt that is covered with oak trees. Every year this hill produces many acorns and is a hotbed for deer activity in the early season. I have a stand in the perfect spot on this hill. A west wind is all I need to almost guarantee an opportunity at an animal. We hardly ever get a west wind when I can hunt.

October 27th of 2019 was no different. It was a beautiful cool Sunday morning, with a steady East Northeast wind. I had a kitchen pass, the weather was good, lots of sign in the area, and my favorite stand was unhuntable. I looked at the Scent Lok Oz Radial and said to myself, “what the hell, let’s go test this thing again.” My wind would be blowing directly into a bedding area all morning and directly over the food source I was hunting.

Shortly after daybreak a doe appeared directly downwind and walked in on a string to just below my stand. I raised my weapon, fired, and watched my arrow narrowly miss her. I dropped my bow arm, a rookie mistake I make from time to time. I was frustrated by my error, but I had a breakthrough. There is no doubt my scent had been blowing towards that deer and she had no clue I was in the world. I made no scent elimination efforts whatsoever besides the ozone generator. I was almost convinced.

Portable Ozone Generator for Hunting Reviews Hunt 3: The Slip Up

November 2nd of 2018 I was hunting a new stand over a trail that also gave me a 250 yard view of a road that had several good trails crossing it into some hardwoods. Right about sunrise, a bachelor group of four bucks would cross about 100 yards to my North out of range for my bow. I would go hang another stand on that crossing that day, but I would not see any of those bucks again that season. 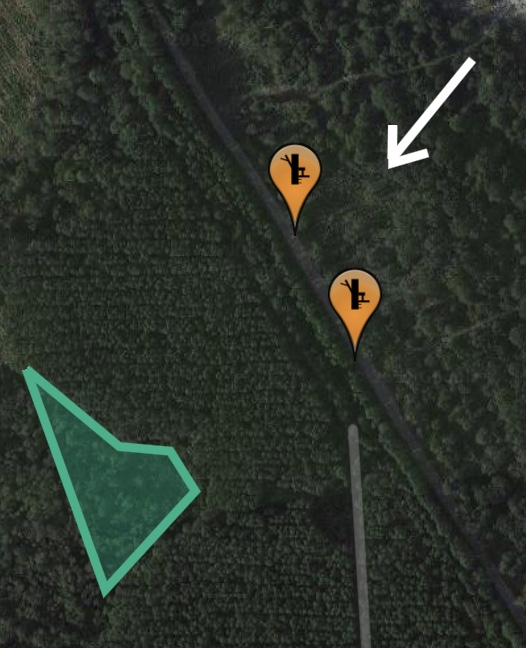 Green is known bedding, orange is the location of my loc-on, the white arrow indicates wind direction.

November 1st of 2019 rolled around and one year later I found myself contemplating where to hunt. I made a quick scouting trip to find several fresh tracks using that same trail, with my stand just 15 yards away. Unfortunately for me, the wind was wrong again. Those bucks bedded in a swamp to the west and I had an Easterly breeze. Hunting this set would mean blowing my scent towards the bucks trail at an angle that would not allow me a shot before they would pick it up.

November 2nd found me in this tree anyway with the ozone generator whirring away just ever so audibly above me. The 1st hour and a half of daylight proved fairly uneventful. At around 7 am I heard the snap of a twig on the trail. I slowly turned my head to catch a glimpse of brown hair and antler slipping up into the shooting lane. The eight point stepped into view and my arrow found its mark. The buck would not go 60 yards before crashing. This deer 100% walked through my scent trail and I was convinced.

All a hunter really needs is a weapon, good boots, woodsmanship and time to take down more than enough game for his needs every year. Not everyone has as much of the latter as they would like. That is where the ozone generator for hunting adds the most benefit. If a hunter with a minimal amount of time doesn’t have to wait for the right wind to hunt a particular stand, he improves his odds for taking the deer he is after with the limited amount of recreational time he has available.

Do portable ozone generators work for hunting? Yes, unequivocally yes they do. Here are three “in-the-field” examples, no science needed, where I hunted a stand that I otherwise would not have and that resulted in an opportunity at a mature animal. 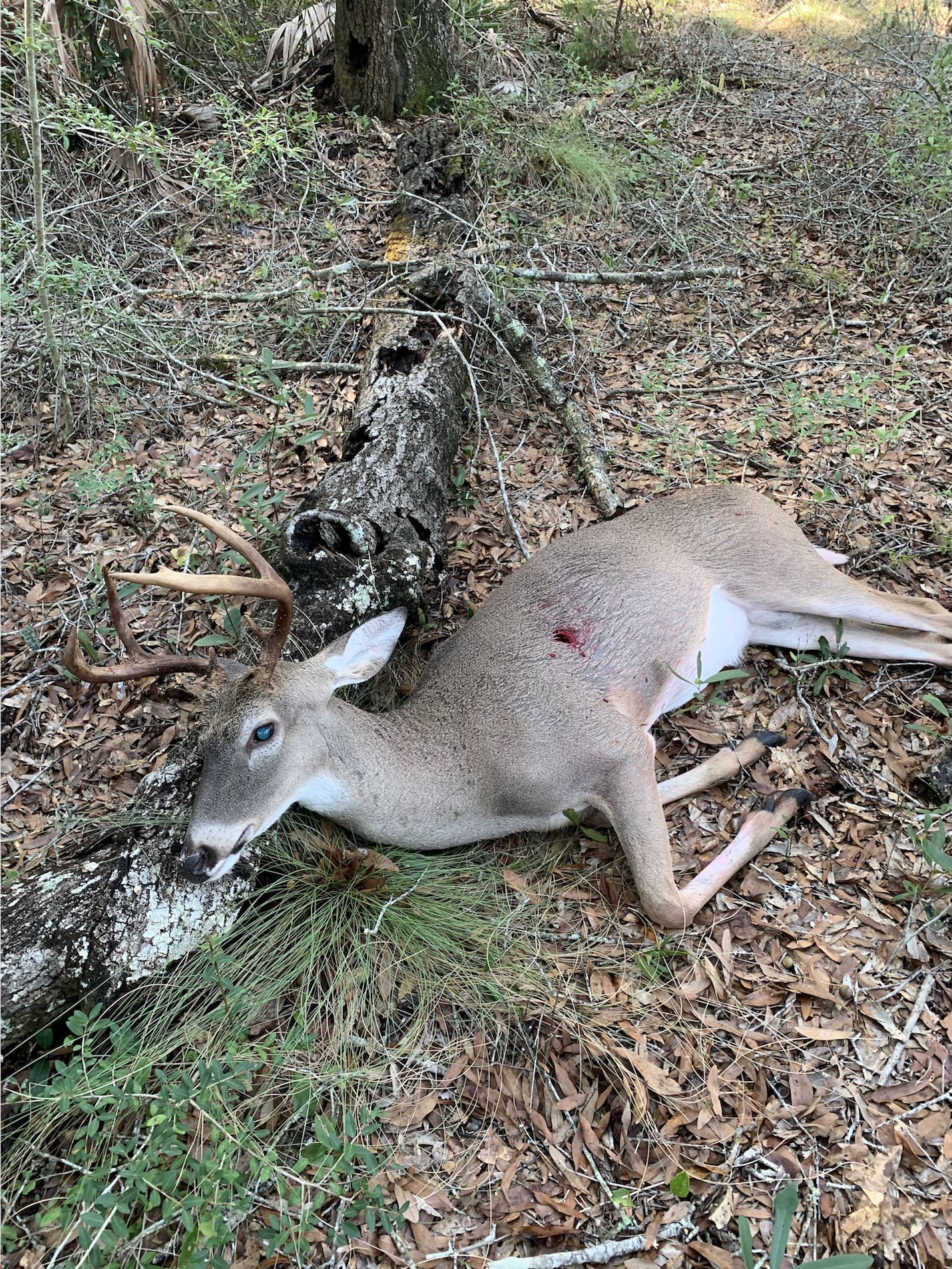 The science behind using ozone generators while hunting turned out to be genuine and helpful.

Honestly, I wish it didn’t work. I feel a bit naked without it now. In the South, we never really know where a deer is going to come from, so every hunt offers an opportunity to get busted no matter what the wind is doing. I can say this, any technology that helps hunters spend more time enjoying a natural resource is a good thing for the tradition of hunting, the wildlife, and the innovators who bring it to market.

While I know I don’t have to have an ozone machine for hunting whitetails, the new opportunities it creates for me during the limited opportunities I have to hunt make it more than worth it to add to my arsenal.

Check it out at Scentlok Oz Radial EZ