How to Stock a Pond with Trout | Great Days Outdoors

How to Stock a Pond with Trout

How to Stock a Pond with Trout

Rainbow trout stocked fishing ponds in the South? No way. Trout are cold water species and do best out west or in the northern climates where the water is more to their liking. Right? With some exceptions, a native trout fishery doesn’t really exist in the Deep South. Having said that, it doesn’t mean that as a pond owner you can’t add rainbow trout to your mix and experience some fun and fishing excitement during the colder months. You just need to know how to stock a pond with trout.

Norman Latona is founder and president of Southeastern Pond Management.  SEP specializes in everything that has to do with ponds and small lakes. SEPond provides ecosystem analysis, management programs, pond construction, liming, fertilizing, fish inventory assessment, removal processes, stocking of forage and game fish, maintenance and more. Pretty much the whole nine yards when it comes to ponds.

Latona explained that SEP got into stocking rainbow trout in ponds about 15 years ago because of a demand from property owners who had water on their hunting land and wanted to have some fun catching fish in the colder months when they were out chasing deer and other game. SEP initially started stocking hybrid striped bass, who are also comfortable in cooler water and then they started playing around with stocking rainbow trout and things just took off. 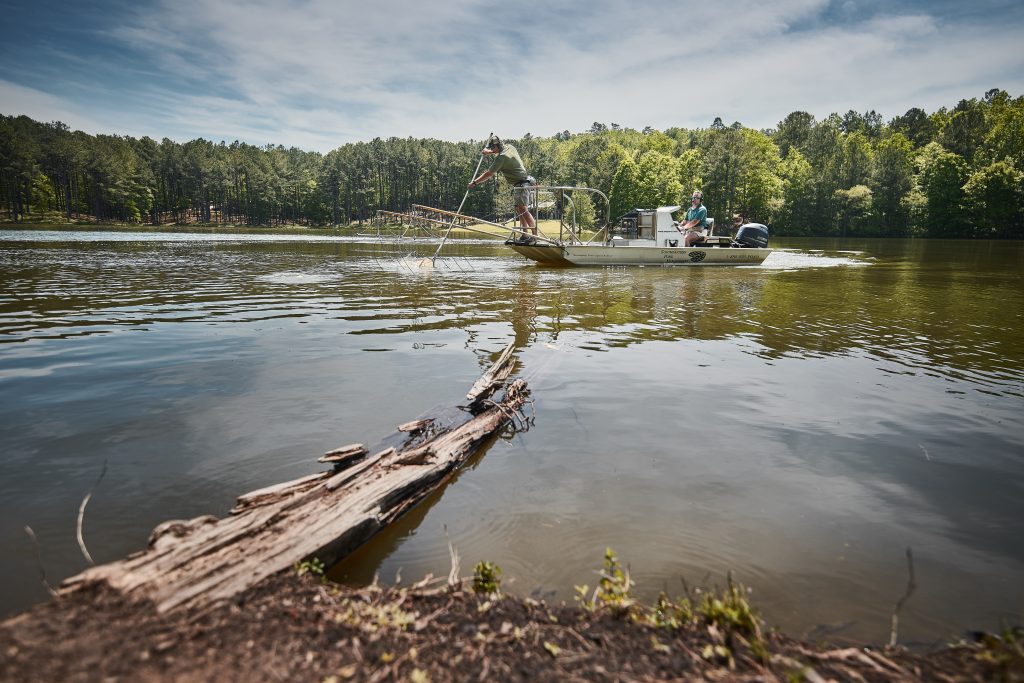 While rainbow trout are a cold water species and are more prevalent out west or up north, that doesn’t mean that they can’t be stocked in ponds in the Deep South.

Trout possess a number of traits that make them ideally suited for use in ponds. First, they are eager and aggressive feeders and will take a wide variety of baits and lures all winter long. Once hooked, trout are great fighters, often leaping from the water in wildly acrobatic displays.

“Rainbow trout feed aggressively in the cold water and they fight and jump like crazy and it is a real kick to catch them especially with four-to-six-pound test line and light spinning tackle or on a fly rod,” Latona added.  “If you close your eyes for a minute, you may think you are on the Colorado river catching trout.”

Latona pointed out that rainbow trout grow quickly when fed a high protein artificial food. Trout feed conversion rates can be close to 1:1 on such a diet, meaning that each pound of feed they consume translates to nearly a pound gain in body weight.

“Over the years we have dialed in on rainbows and are now able to source really high-quality trout from a pound, even up to eight or nine pounds,” Latona said. “Just like bass grow in the spring and summer, these trout grow like crazy in the wintertime. They readily eat high protein pellet fish food and between that and other forage fish they can add three pounds over the winter.”

The drawback for rainbow trout stocked fishing ponds is that they can’t survive warmer water so it is kind of a “put and take” situation.  When the water temperature gets into the 70s the fish start to struggle, so in a typical spring they will be pretty much gone by the middle or end of May.

“We tell folks that in mid-February to April start pulling them out and enjoy them,” Latona said.  “They are fantastic to eat and it is fun to get a little taste of a cold-water freshwater fish in the Deep South in the wintertime.” 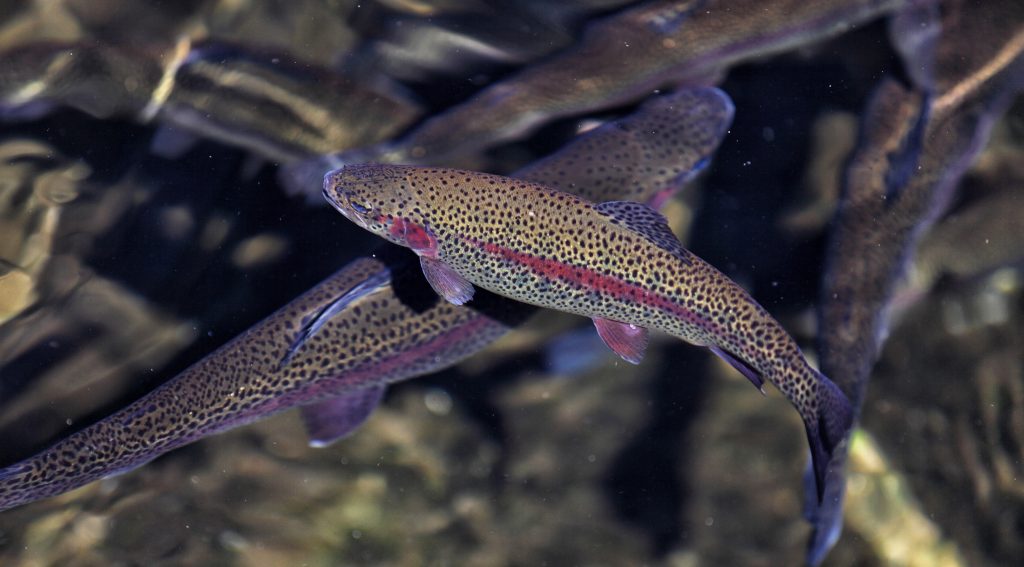 Rainbow trout process many treats that make them ideally suited for stocking in ponds.

While water temperature is really the “bellwether” for introducing rainbow trout, Latona said that there is a definite window period for stocking in order to get the optimum results.

“We try to make sure that the water temperature is below 70 degrees and we try to get as many customers taken care of before Thanksgiving as possible since a lot of folks spend time at their cabins and property with ponds during the holidays so early to mid-November is a busy time for us,” Latona said.  “We can stock trout later but we want to maximize the amount of time in the pond to feed and grow before the water starts to warm up.”

“While you can stock larger fish, unless you have a desire to catch a giant trout you are going to get more bang for your buck with stocking rainbows in the pound to a pound and a quarter size,” Latona added.

When it comes to stocking density, Latona said that if you have a smaller pond, from three to about eight acres, depending on how much fishing and catching you want to do, he can stock 20, 30, 50 and sometimes even up to 100 pounds of rainbows per acre. In larger lakes, because of cost, that stocking rate may drop to 10-20 pounds per acre.

“The cool thing about rainbow trout is that they are attracted to pelleted fish food so even if you stock them in a large lake if you have a feeder out there they will put on weight and are catchable,” Latona said.  “They get a little bit smart and you have to get a little stealthy with them but at the end of the day, they are going to eat and you can catch them.”

Latona said that if you have big trophy bass in your pond that weigh six to ten pounds some of the smaller trout that you stock may become dinner for the bass predators but it isn’t a major concern.

“There is no doubt that because rainbows are long and slender and don’t have any hard fins they can be a perfect meal for a big bass, but for the most part, once we get up to a pound and a quarter or a pound in a half probably some of them do get picked off and eaten but not many overall,” Latona said.  “On the other hand, for people who want to grow big bass, we have stocked ponds with four, five and six inch trout as food for bass. It’s a little bit of a pricey way to feed your bass but there isn’t a nutritionally better way to grow bass.” 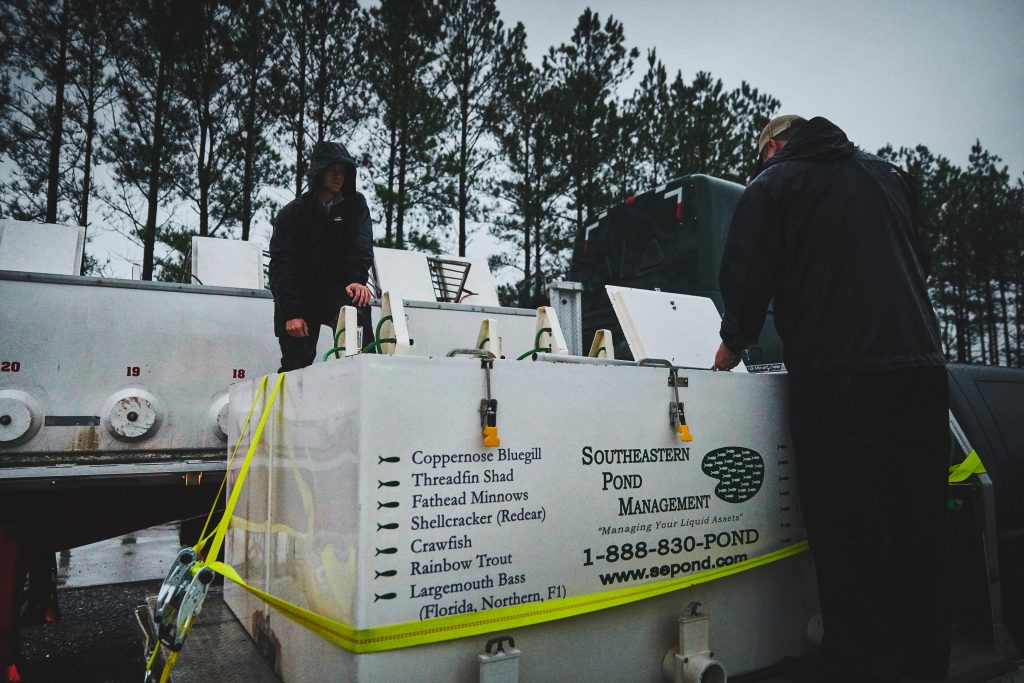 As the water temperatures rise in your pond, the rainbow trout will transition from a game fish to a forage fish.

The bad news for rainbow trout stocked fishing ponds is that they will all die when the water temperature increases.  Still,the silver lining in this cloud is that while you may not be able to enjoy the action of catching a trout your bass will cash in on lethargic trout for dinner.

“Normally, by the end of April and the first part of May in the Deep South, water temperatures will approach 70 degrees and the trout will struggle and you will lose them,” Latona said.  “The good thing about trout is that they are long and slender and you would be surprised what a five or six-pound bass can eat when it finds a rainbow trout that is stressed out from high water temperature and is hardly moving.”

“Some of these large bass can get a one-pound trout down their throat and they take advantage of them while they can,” he added.

“I’ve got pictures of me holding a trout with snow covered banks in Alabama and it is a hoot,” Latona concluded.  “Here I am, holding up a trout caught in south Alabama in the wintertime when we get our occasional dusting of snow.  It’s a hoot and it is cool.”