Tripletail are ugly in the water, beautiful on the plate, which is why every coastal angler would love to invite a few home to dinner.

Tripletail are found in temperate seas in both the Atlantic and the Pacific, and the current International Game Fish Association (IGFA) world record, 42 pounds, 5 ounces, came from the coast of South Africa. Largest reported in U.S. waters was a 40-13 at Fort Pierce, Florida in 1998.

The average ‘tail, however, is much smaller, typically five to eight pounds to eight pounds though 10, and even 15-pounders are not uncommon. While they seem very lethargic hanging around a buoy, barely moving for minutes at a time, when hooked they’re powerful fighters, and it takes a stout line and some quick boat maneuvers to get them away from cover in many cases.

Oddly enough considering their less-than-graceful profile, they sometimes jump like tarpon when hooked.

They’re also called blackfish, for obvious reasons, and also buoyfish and eddyfish because of their correlation to sea buoys, floating debris, pilings and docks. Because they’re not fast swimmers, they rely on camouflage and staying close to cover to avoid being eaten. So they’re often found by anglers within a few feet of a marker or floating cover.

Tripletail are a fast growing species with relatively short lives, ranging from four to eight years for most. Female tripletail reach sexual maturity at one to two years and approximately 17 – 19 inches in length while male tripletail mature at a smaller size of about 10 inches in total length, according to the Florida Fish and Wildlife Commission.  An 18-incher typically weighs about four pounds. 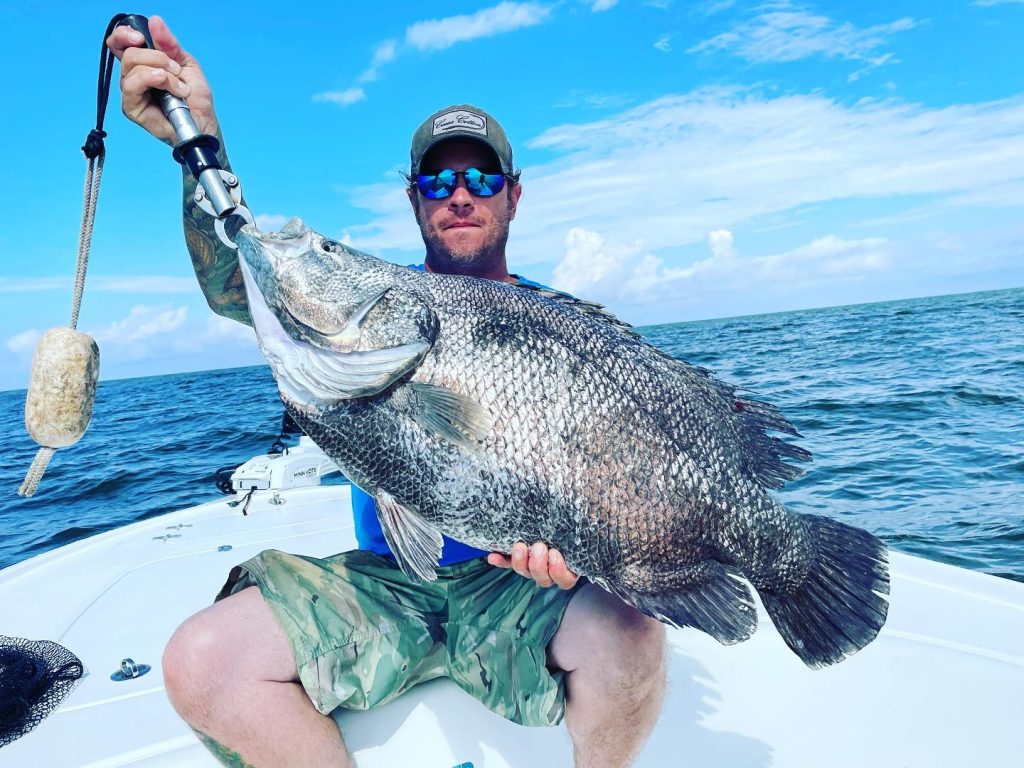 Tripletail are powerful fighting fish that make a great dinner.

Young tripletails are about the color of sargassum weed, and that’s the reason they’re often found in large drifts of it until they’re about six inches long or so their shape and slow movements plus the coloration are excellent camouflage.

How to Find ‘Em

Though tripletails can seem dumber than bluegills at times, at other times they can be maddeningly difficult to fool. Cold Blooded Fishing’s Captain Richard Rutland, who fishes lower Mobile Bay and Mississippi Sound, frequently guides his anglers to a few bonus ‘tails during his redfish, trout and flounder charters.

“We always take a look at any markers or floating debris, of course, but I’d say the majority of fish we catch are what I’d call free-swimming, just hanging there in open water and not close to any cover,” Rutland said. “They look like a black plastic bag, if you’re seeing the dorsal side of them, or a white plastic bag if you’re seeing the belly, just hanging there and not doing much at all.”

Whether he sees them on markers, crab trap buoys, weedlines or free-swimming, he says it’s always worthwhile to turn around and make an attempt to catch any tripletail sighted near the surface. 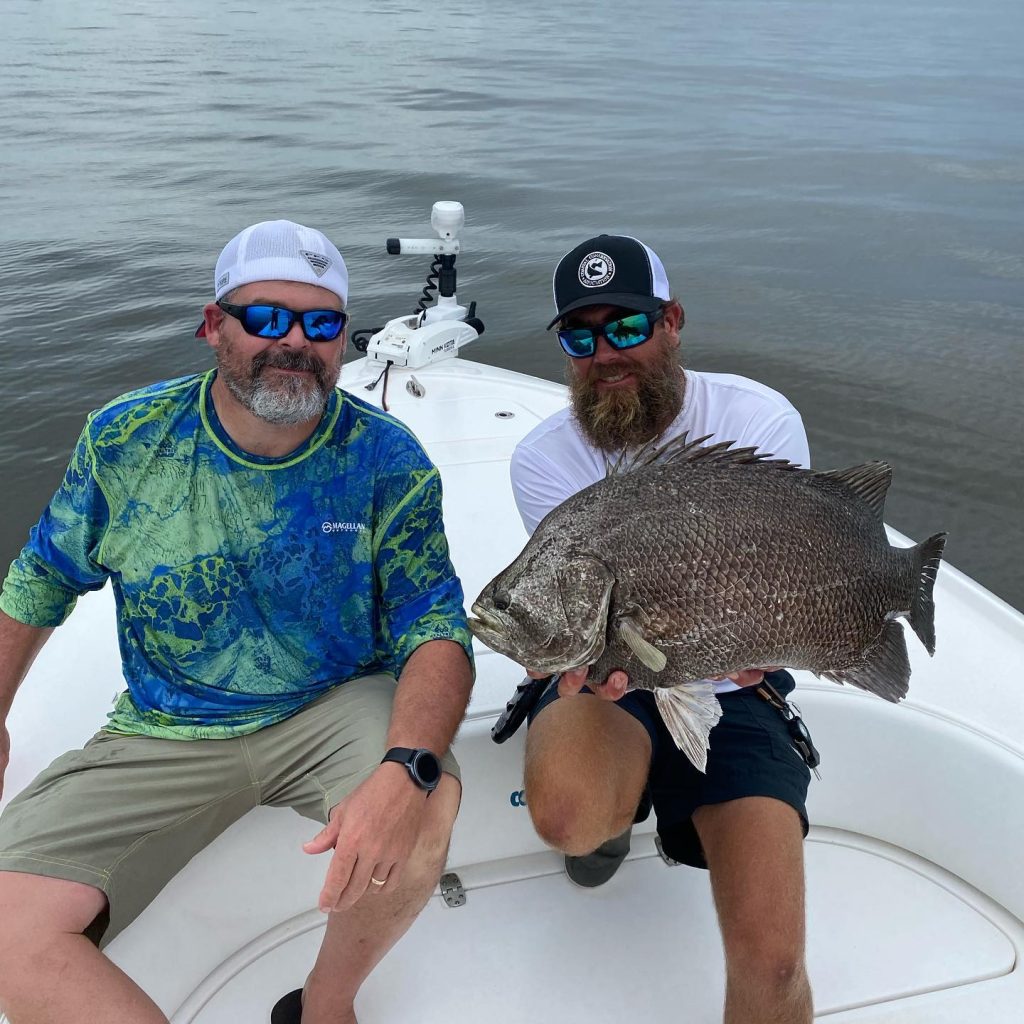 Tripletail can be a good fish to go after during your speck and redfish trips.

“They will go down if you pass too close to them with the outboard running, but if you circle around and come back to that spot on the trolling motor, you’ll usually see them very close to the same spot,” Rutland noted. “Ease in just close enough for a cast and you’ll catch a lot of those fish.”

Most anglers catch tripletails on the gear they’re already using for trout and reds which is a medium-light to medium seven foot  spinning rod, 3000-sized reel and 15-pound-test braid with a 20-pound-test fluorocarbon leader about the length of the rod, tied in with a double uniknot.

If larger tripletails are the target and they’re sighted around markers or buoys, heavier gear might be necessary to prevent them from wrapping around the structure and breaking off, but for most the lighter gear does the job.

“My favorite bait is a large shrimp, fished with no weight and no float, just free-lined,” Rutland explained. “If you get that bait close enough to a tripletail for them to see it, they’ll almost always take it.”

Rutland pointed out that on those days when you don’t have shrimp large enough to cast alone, it will be necessary to fish smaller shrimp about 30 inches or so below a popping cork.  While this sometimes spooks the fish, if it’s cast uptide and allowed to drift to the fish, it often scores.

Either way, Rutland recommends fishing the shrimp hooked under the horn on the head with a size 1/0 Kahle style big bend hook. He also likes the Owner SSW hook in 2/0 size. He notes that a size eight treble is also highly effective, but is difficult to remove for any fish that are to be released.

“If there are a lot of floating weeds around, you might do better to hook the shrimp in the tail,” he said. “It comes through the weeds better that way.”

Some anglers also catch tripletails by tossing small pinfish, croakers of pilchards near them on similar gear. 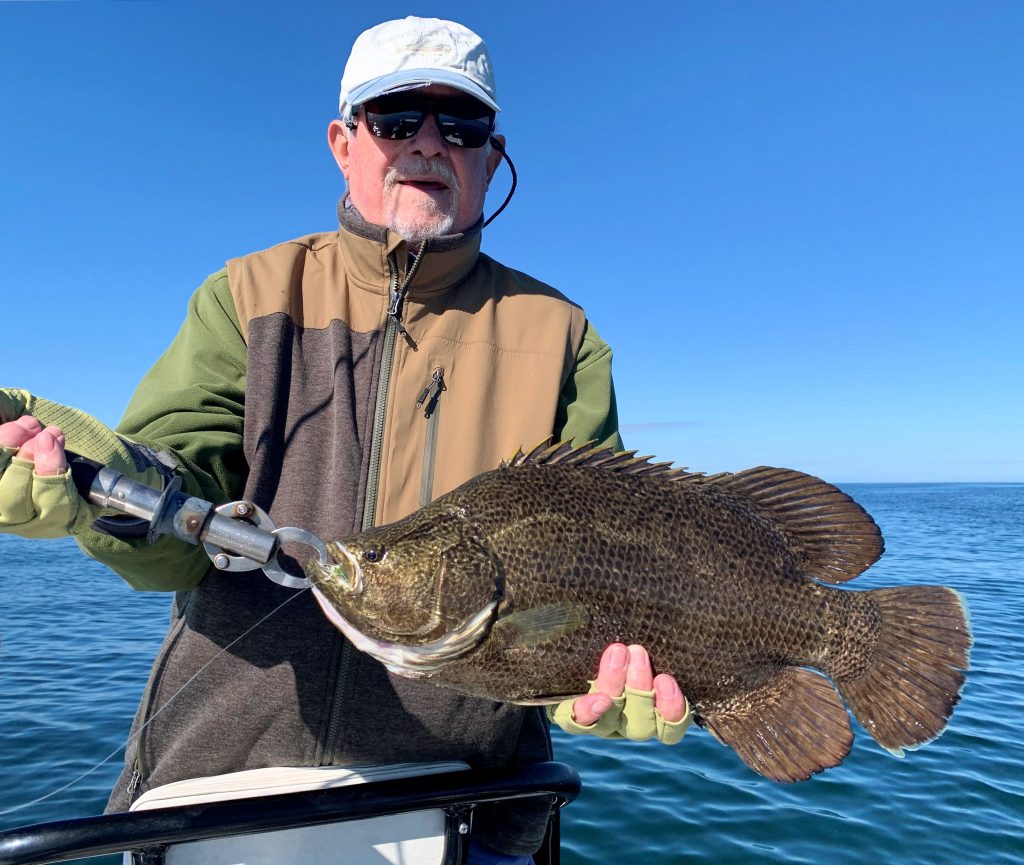 You can fish for tripletail using your speckled trout or redfish setup.

For those who prefer to use artificials, which is more difficult but definitely possible, shrimp imitations like the DOA Shrimp or the Vudu Shrimp are among the best choices. Scented shrimp like the Fish Bites Fight Club Shrimp or the Berkley GULP! Alive Shrimp are also effective, fished on very light jig-heads or weighted hooks.

Of course a big part of catching tripletails is seeing them, and Rutland has some advice on that, as well.

“The higher you can get above the water, the easier it is to see the fish. I have a tower, but if your boat doesn’t, you can make do by standing on the console or putting an ice chest on the bow and standing up there,” Rutland pointed out.

It’s easier to see fish between 9 a.m. and 3 p.m., and also much easier to spot them if you keep the sun behind you.

Rutland is also a fan of quality polarized sunglasses.

“I’m wearing Bajio’s now, which are the clearest that I’ve found. I like the glass lenses, amber with green mirror, which works best for the green water we have off the beaches here in Alabama. Of course you’ll want a cap to shade the lenses, too,” he pointed out.

Bajio makes a number of models specifically for sight fishing, with large side frames to shade the lenses. They recommend blue or gray lenses for spotting fish in clear water, copper, green and rose lenses for more murky water.

In south Florida, tripletails are most commonly caught from November through April around the stone crab trap buoys that are everywhere just off the beaches during the cooler months. Best time is during a warm spell in winter with calm seas and high sun.

In the northern Gulf of Mexico, however, they’re primarily a summertime fish, with action best March through September from Panama City to the Mississippi Delta. The largest tripletails of the year are often caught in July and August, when fish of 15 pounds and up often appear around the markers and buoys. Biologists say this is spawning time for the species, and many of the jumbos are big females.

Again, trap floats are always a good target, but here they’re mostly blue crab traps. The traps are usually laid out in a long line, with buoys a few hundred yards apart, so you can follow a line a long way once you find one.

Tripletail can also be caught by well-placed flies, with shrimp and crab imitations like the Merkin. The light impact of the flies gives them an advantage over heavier lures, though it takes a quick cast with a minimum of backcasting to avoid spooking the fish in most cases. Most use 9- to 10-weight rods, floating lines and level 25-pound-test leaders to allow them to pull the fish away from markers and buoys. 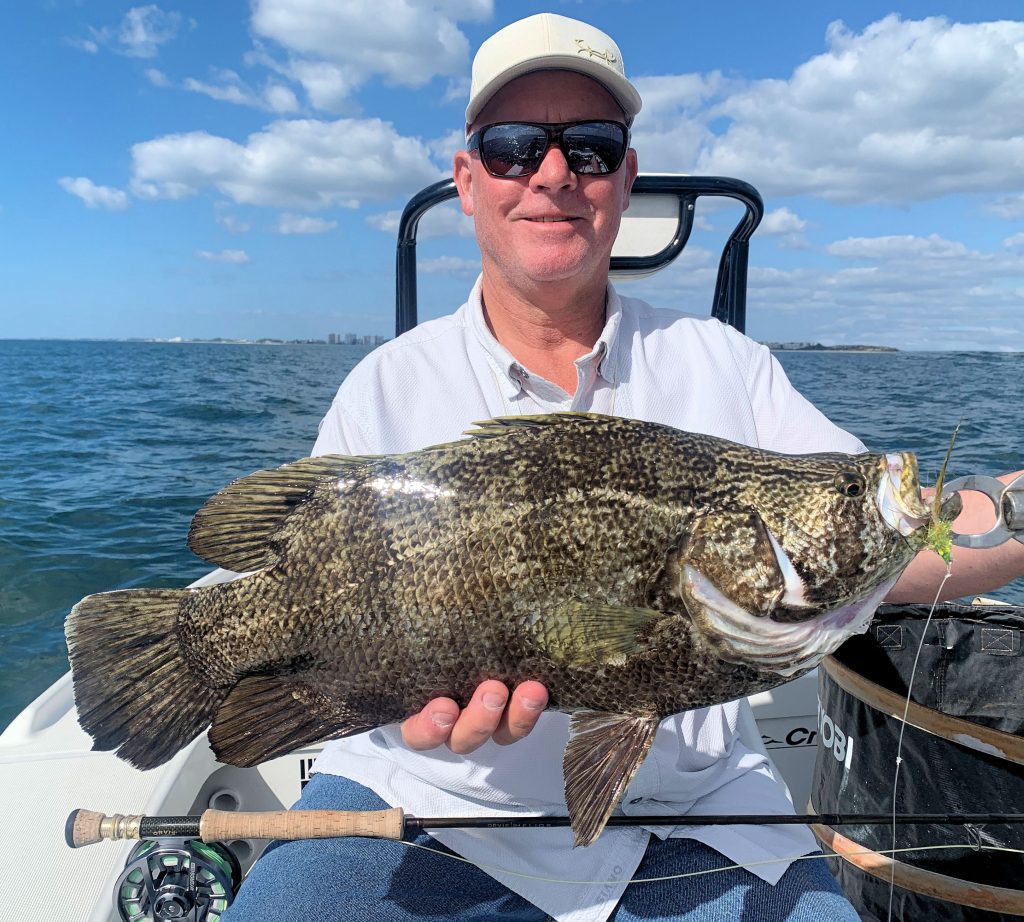 Tripletail can even be caught on well-placed flies.

Captain Rick Grassett, who fishes out of Sarasota, Florida, is a master at putting his clients on fish in that area with fly tackle, with most found around the stone crab trap buoys between mid-October and the end of April, as well as into summer.

Though tripletails are easy to clean, the depth of the body means that it takes a long blade to make the job efficient—a 10” to 12” blade honed razor sharp is the best bet.

The fish should be iced immediately when caught, as with all species. Be sure to put ice on top of it, the broad, thick body won’t chill well otherwise.

As with most fish, ‘tails can easily be skinned with the scales on if you just leave a “hinge” on the fillet at the tail, flip it over when clear of the ribs and then run the knife flat down the table between skin and meat to do the job.

They can be cooked any way you like—best might be just to baste with salted butter and broil until just done, then serve with lime slices.