For those of us who love leaving the docks before dawn—as well as the night stalkers who head out at sundown—navigation can be a real issue. If you can’t see where you’re going or what’s ahead, you and your crew can be in real danger. Still, there are a lot of reasons to head out in that seemingly impenetrable darkness. This is where marine night vision systems for safe navigation are key.

For one, the early bird often catches the marlin—being far offshore when the sun comes up can make the difference between a dry run and a successful trip and that may mean leaving the docks in pitch blackness. The same can be true for being the first boat to a distant drill ship, Fish Aggregating Devices (FAD) or oil rig.

Not only that, but swordfish are known for coming to the surface and feeding after dark, and many species of snapper feed avidly after dark on the reefs at the edge of the continental shelf. 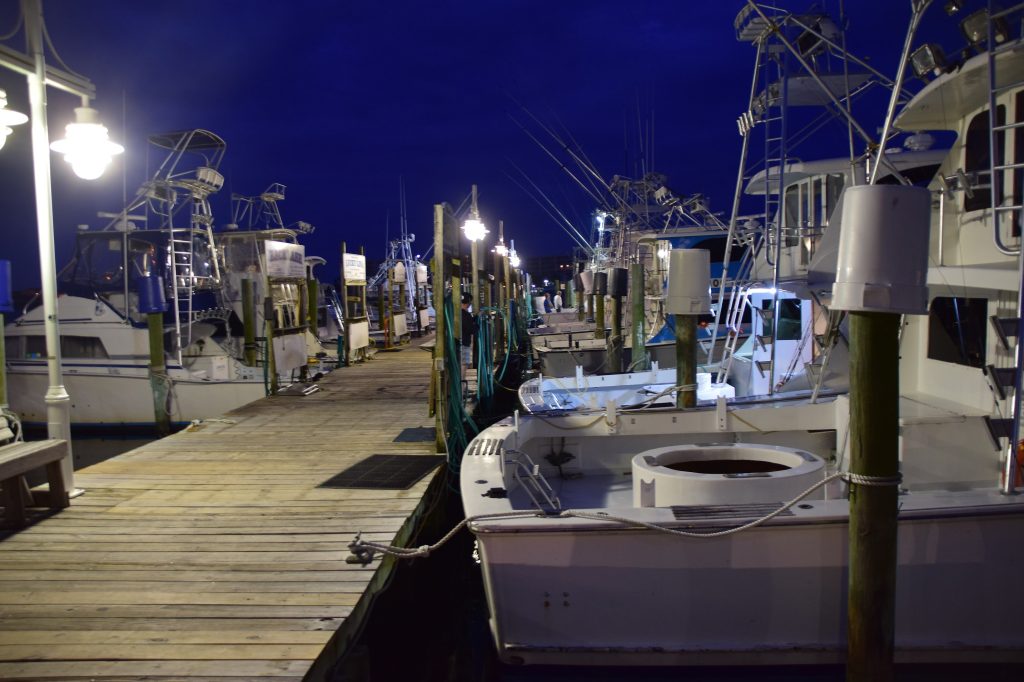 There’s plenty of light at the docks before dawn, but when you pull out early, quality night vision equipment can keep you safe.

Inshore spotted seatrout and redfish stack up under residential docks after the sun goes down, while tarpon like nothing better than to school into a deep pass on outgoing tide after dark and eat the crabs and baitfish flushing out the channel.

Fortunately, there are now many night-vision and thermal imaging systems capable of turning night into day, and making navigation between sundown and sunset not only safe, but fun.

The systems not only allow you to clearly see unlighted channel markers but also floating debris that might damage your running gear.

They also reduce the danger of running into other boats—particularly anglers fishing from kayaks and the like, who can be very hard to see even if they have lights due to their low position on the water.

While quality marine night vision systems are not inexpensive, they’re a minimal investment considering the cost of most boats today. Top-end night vision for boats can be seen as an added form of insurance for those who operate in low-light conditions. To say nothing of the safety factor—avoiding a channel marker can be a life-and-death moment when you’re running on plane at night.

There are two routes to allowing our eyes to see after dark with current technology.

Conventional night vision gear intensifies reflected star, moon or manmade light electronically. It works in the faintest of lighting, but in complete blackness, it cannot “see”. 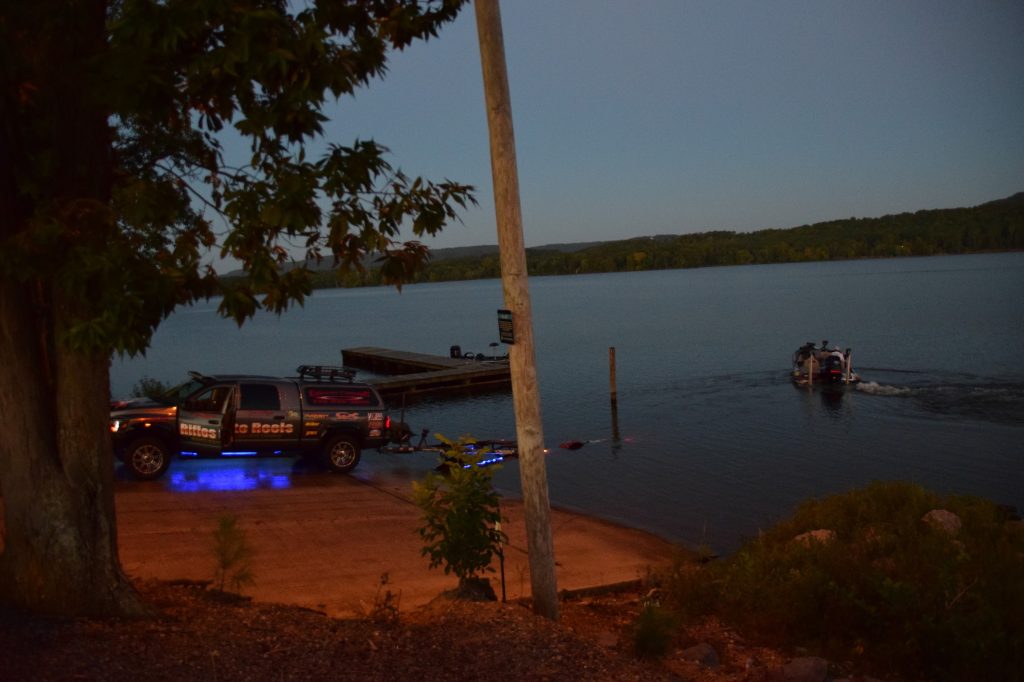 Heading out for some night fishing on your favorite bass lake is much safer with night vision gear.

Thermal imaging equipment reads residual heat radiated from an object. The slightest amount of heat greater than the surrounding area—water for example—will show up, even in complete darkness. However, if there’s no difference in the heat levels of the objects you want to see and the background, thermal imaging can’t “see” what’s ahead.

You’ll see a considerable variety in pricing on various makes of marine night vision systems. While the least expensive might be OK for novelty use or for the kids to enjoy some night games in the backyard, they’re not what you want to keep you and your family safe on the water, or to ensure the security of a boat that may have a six or seven-digit price tag.

What are sometimes called “civilian style” night vision systems can be found starting around $200. At the other end of the scale, the best mil-spec systems can cost well into four or five figures. As usual, you get what you pay for, so don’t be penny wise and pound foolish, as they say. The best systems not only provide a much brighter and clearer view, but also are built to take whatever the elements throw at them.

Night vision systems are classified by “generations”, based on when they were originated and on their capabilities. 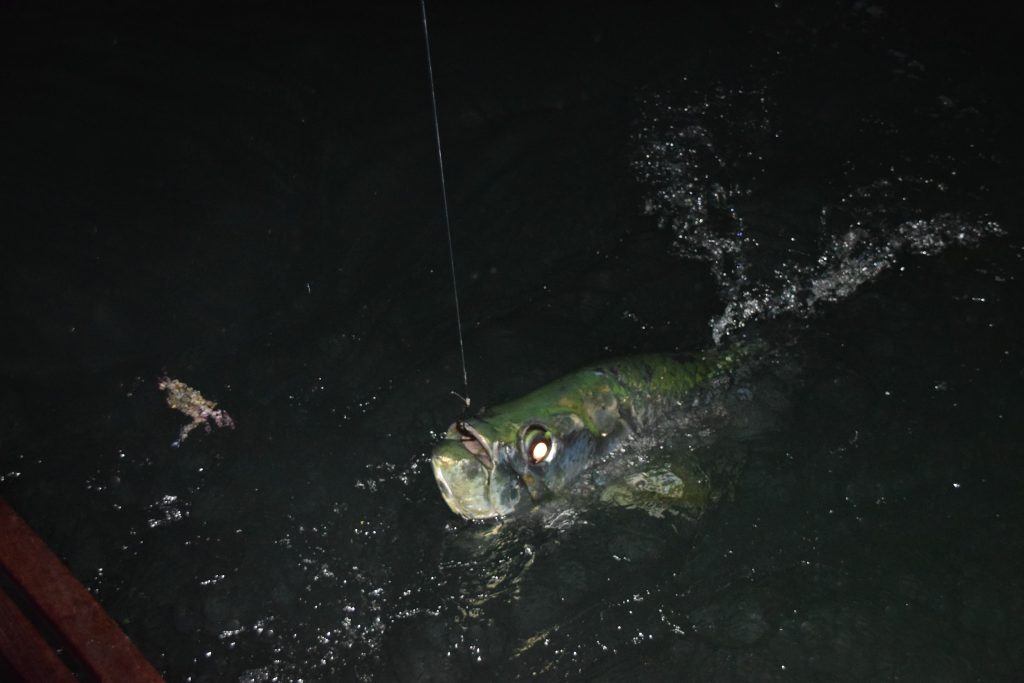 If you’re after night-prowlers like tarpon, night vision gear makes it easy.

Least expensive Generation I equipment increases light about 500 fold, and range is 75 to 100 yards in good conditions, which might be adequate for small boat operation in lakes, rivers and nearshore coastal use.

More expensive Generation II products amplify light about 10,000 times but at lower resolution and have ranges to around 200 yards, depending on conditions.

The newer—and most expensive–Generation III units amplify light 30,000 to 40,000 times and provide sharp images at longer ranges, up to 300 yards in favorable conditions. (However, rain, fog, smoke and mist can cut down visibility dramatically).

Among the best are the new PD systems from Photonis Defense, a company that for over 40 years has supplied night-vision equipment to military operators around the world.

Built to survive battlefield conditions, including some models that function as weapons sights, Photonis gear is more than capable of surviving conditions on any sportfishing boat.

According to company vice president Sean Kirk, in clear air the Photonis PD systems, available in both monocular or binocular models, allow excellent viewing with only starlight to aid the equipment.

Why Not Thermal Imaging?

Thermal imaging can definitely be useful for night operations, allowing you to see objects that generate any sort of heat—including other humans, outboard motors, almost anything that’s somewhat warmer than the background—even in complete darkness. In that way, thermal imaging has an advantage over night vision systems, which require at least some slight hint of light, such as moonlight, to be fully functional.

However, you can get a better quality night vision system for less money than the cost of a quality thermal imaging system that will provide equally satisfying performance. A good thermal imaging system may cost $6,000, while a monocular night vision system delivering similar quality can be found for about $3,500. (The best in class are more pricey.) 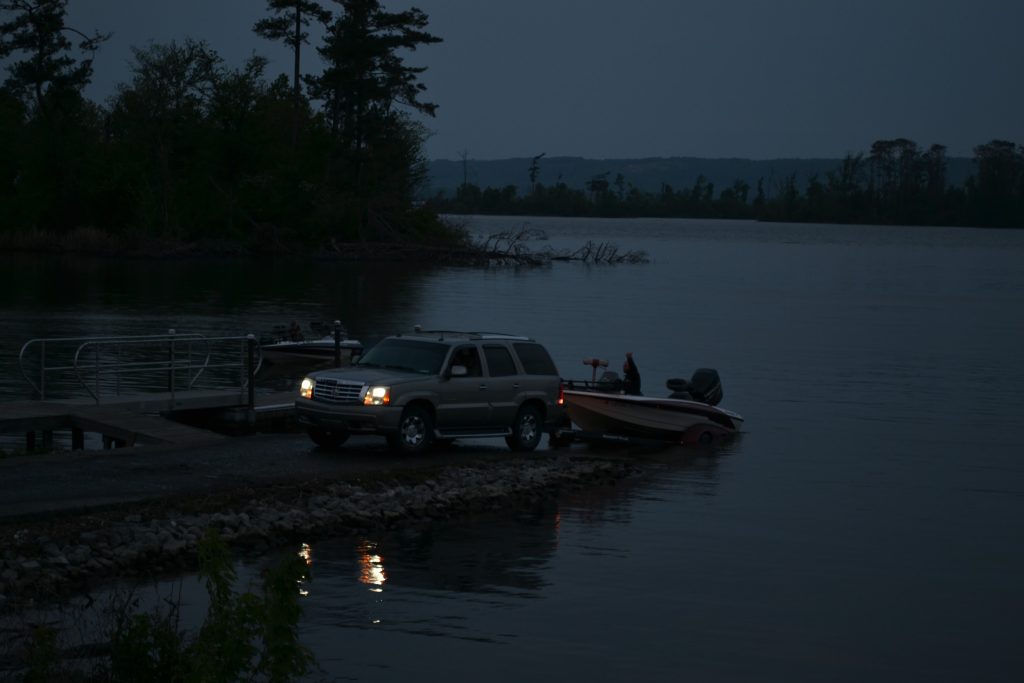 The early bird catches the bass—make an early start with night vision gear.

Also, good thermal systems tend to be much heavier than night vision systems, and while you can readily detect any object hotter than the surroundings with thermal, seeing much detail is usually a problem. Night vision systems deliver images that our eyes can better identify.

Thermal imaging also burns through batteries much quicker than night vision systems, and most units are also less durable. Bouncing around on a console occasionally showered with saltwater is not good for their longevity..

Another benefit of boat night vision over thermal is that night vision can be used behind glass, whereas with thermal, you cannot see through glass. That means it’s less useful behind a windshield or in a wheelhouse. (However, thermal imaging cameras can be exterior-mounted with a feed to an interior screen for viewing, avoiding this issue.)

The PD Pro M 16mm Monocular is 58% smaller and 38% lighter than competing premium night vision monoculars, making it easier to carry, handle and stow than others, according to the company. It can be used like a telescope, or mounted on a helmet for hands-free operation. 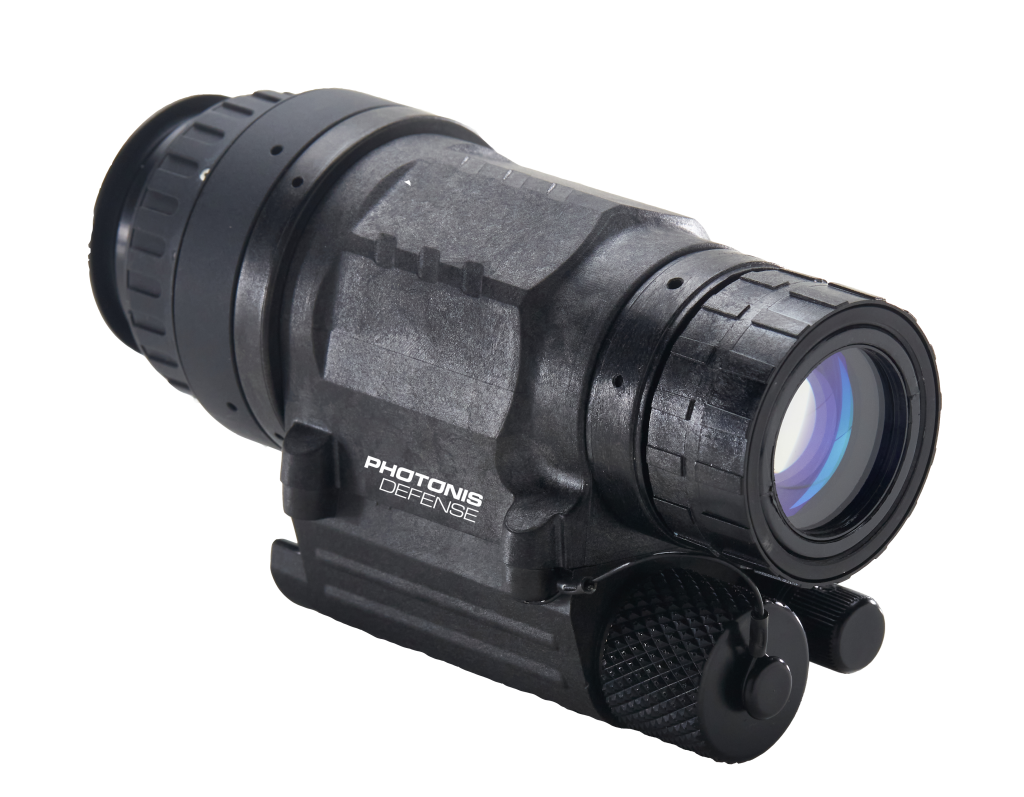 German proprietary optical coatings on the lenses add to the clarity and color of images. Battery life with a lithium battery is about 25 hours of steady use at 72 degrees Fahreheit, according to the company. The weight is just nine ounces, and it’s small enough to fit in a jacket pocket.

It should be durable– an aerospace aluminum alloy housing makes the system environmentally resistant to extreme heat, cold and salt.

The company says that the 4G image intensifier tubes are equipped with the fastest “auto-gating” in the industry. This is a system that reacts over three times faster than the blink of an eye to sudden lighting transitions, such as a lightning flash or someone turning on a spotlight, conditions that can temporarily blind a viewer with less effective night vision systems.

Photonis Defense also makes a binocular system, the PD Pro B 16 mm Binocular, which functions like standard binoculars with two tube viewing. It’s 32 percent lighter and 25 percent smaller than any competing night-vision binocular, according to Photonis—light enough to be worn on a lanyard around the neck, at hand anytime you need a quick look ahead while underway. 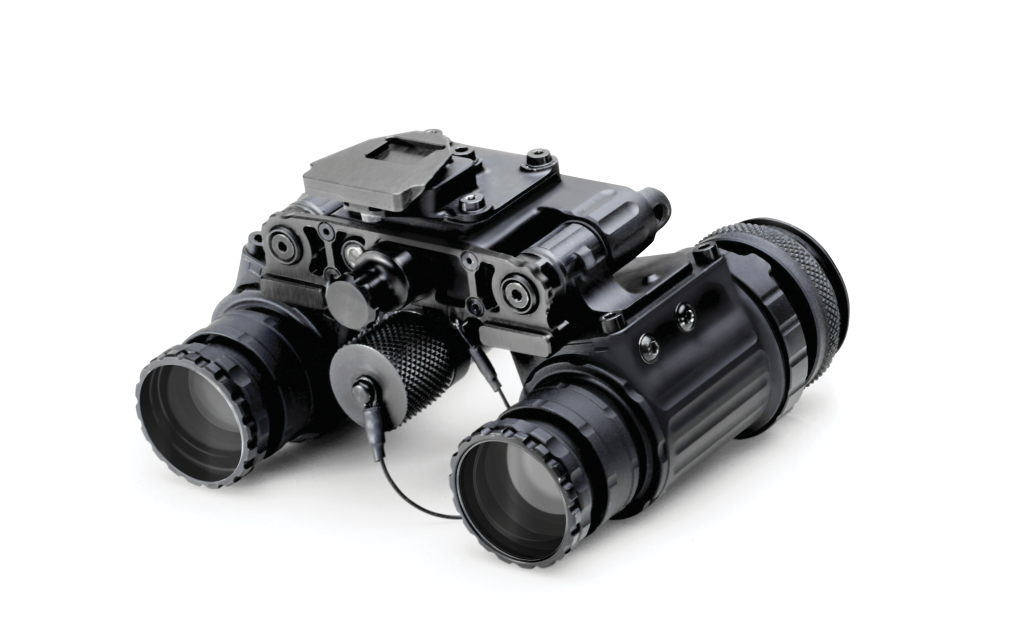 It reportedly allows users to see 30% more of the visible light spectrum in low light conditions, and also has the coated, precision-ground German lenses like the monocular model. It functions for up to 20 hours with a lithium battery.

Both models are available in exterior housing colors including standard black, desert tan and olive green. These are premium systems with premium pricing—they’re designed for those who want, and can afford, the very best on the market. Price for the monocular is about $5,000, and for the binocular about $10,000. Visit www.photonisdefense.com for details.