Traditionally, in southeastern ponds and lakes the largemouth bass reigns king followed by crappie and bream.  While that is still overwhelmingly true, in the past dozen or so years, believe it or not, the rainbow trout is gaining ground. With this in mind, it would be beneficial to learn more about rainbow trout pond requirements.

It sounds nonsensical because rainbow trout are cold water fish and won’t thrive or even survive in the warm waters in the south, with a few exceptions such as Sipsey Fork. Still, even though they won’t live year-round, there is increased interest in stocking them not only for sport but for good eating.

“We’ve been stocking rainbow trout for the better part of a dozen years but every year it gets bigger and bigger as more and more folks find out about it,” said Norman Latona, founder and president of Southeastern Pond.

Latona said that the requests for stocking trout are divided into the “small” and “large” categories.  Small rainbows run from about 3/4 of a pound up to 1 ¼ pounds. For “large” rainbow trout, he means fish upwards of five, six or even seven pounds. Still the majority of the time customers request smaller fish. Stocking in the southeast typically occurs in the middle part of November when the weather turns brisk.

“Since we charge by the pound you get a little more bang for your buck by stocking smaller fish simply because you have more of them to catch,” Latona pointed out.  “As our water temperatures start to dip down into the 60’s that is when we start the stocking efforts and you can grow and catch these fish all winter even into March and April depending on your location.” 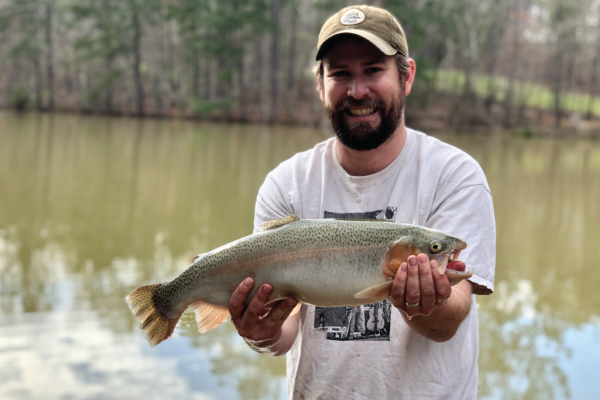 Adding rainbow trout to your pond opens up a whole new opportunity for fishing in the winter months.

“These fish are conditioned to grow in ponds and to eat pellets from a very young age and you can use the same feeders that you feed your bream with.  Some of our customers add a little richer ration, what we call ‘trout chow’ which is higher in protein and enhances fish growth,” Latona added.  “It isn’t unusual at all to see trout that we stocked in November that weighed a pound and by late winter or early spring to weigh two or more pounds.”

“Rainbow trout are the ‘Bass of the Winter’ and they really open up a whole new opportunity to fish your pond during the cold weather,” he added. “They are very active, fight like crazy and are typically fairly easy to catch, especially with feeders that bring them into a specific area routinely.  Of course, let’s not forget that rainbow trout are fantastic to eat.”

The question becomes if these trout are conditioned and trained to eat pellets what can you catch them on and what baits should you use?

Latona explained that these trout are very aggressive feeders and he thinks that, in their minds, anything that hits the surface is fair game and fishing for them actually makes them more aggressive.

“We have folks that fly fish for them and others who catch them on little jigs, spinner baits, small crank baits, even on rattle traps and worms,” Latona pointed out.  “They will eat shad and bluegills but they don’t tax the forage base terribly and they put on quite a show if you catch them on a fly rod or a lightweight spinning outfit, in the six-pound class.”

Since trout don’t have hard spines and are long and bullet shaped, they become the perfect forage for bigger bass that can fit them in their mouths. So, what size rainbows and how many should you stock to ensure that they will grow instead of becoming a bunch of bass dinners?

Latona said that he has found that as long as the trout are in the “small” category which is ¾ to 1 ¼ pounds and in the 10–14-inch range they are pretty “predator proof” and have a good chance of surviving and growing until warm water causes their demise.  Of course, there are no worries about the three-to-eight-pound rainbows being eaten by bass.

There are a couple of variables in this equation.

The cost of stocking smaller rainbows is pretty close to the cost of stocking the larger ones simply because it is pretty much based on the same “food market cost” cost per pound as you would pay for a processed trout. The larger fish, which come out of the brood stock inventory, may be a little cheaper per pound.

“For the larger fish there is not as much of a food market for them and as they get older they are not as efficient and are being cycled out of the brood stock pen and replaced with younger fish so we may be able to get them for a little less per pound, ”Latona said.

When it comes to the actual price, the fact of the matter is that trout are in the food arena and the costs are going to reflect that based on the ups or downs of the market and the supply chain which is currently rather volatile. According to Latona the “smalls” will cost between seven and nine dollars a pound. 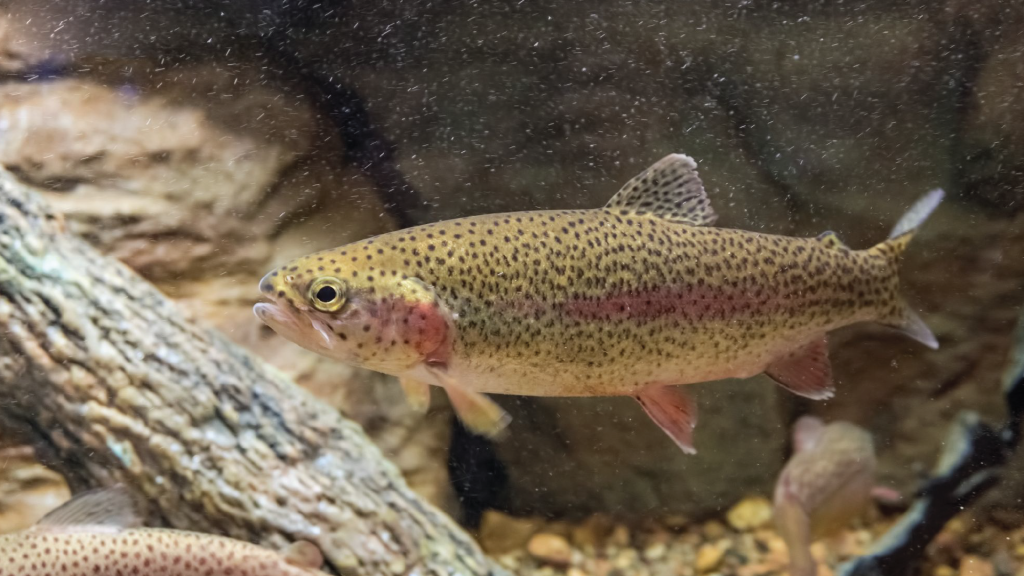 Take into account your goals when it comes the trout in your pond before you start the stocking process.

“To be quite honest it is a fluctuating market like everything else today and everything is up and it is going to cost just about the same as if you buy them processed and ready to cook but the only difference is we get them alive from the growers who either processing them or sending them out to processors,” Latona said.

When it comes to either stocking small or large trout really is a matter of what the pond owner has in mind for the fishing activity.

“The cost is essentially the same in terms of per pound but obviously if you stock smaller fish then you get five one-pound trout for one five-pound fish and that increases the opportunity to catch them, so most of the folks opt for the smaller fish and maybe stock a few of the larges,” he said. “We have some customers that have stocked eight- and nine-pound trout and we have one customer caught one that weighed close to 11 pounds.”

“Catching a three- or four-pound trout in Alabama is pretty rare,’ Latona noted. “They grow pretty rapidly, especially if you feed them the 50% plus protein food.

The cost per pound needs to be balanced with the pond owners’ goals.  If he wants to have great fishing for guests or family during the holidays or the cold weather season, he may want to go with the smaller trout with more fish to catch.  If he is into big trout, then he may opt for reduction in numbers of fish in order to catch a trophy.

Latona explained that SE Pond stocks rainbows at different rates simply because they are not trying to “in perpetuity” populate the pond because of the increase in water temperature in the late spring which means the fish you stock in November will either be caught or will die when the water gets unsustainable for them.

The stocking rates in part depends on the size of the lake. 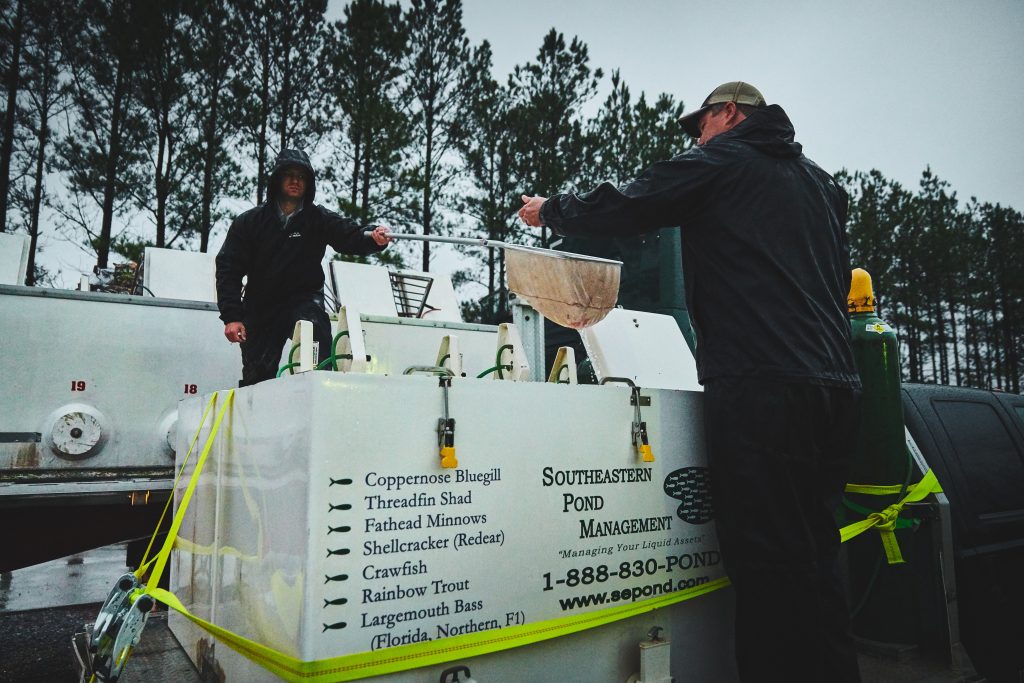 You don’t want to overstock your pond with trout. You need just enough to be able to catch them all before the water gets too warm for them.

“We’ve found anywhere from 10-15 pounds per acres on the larger lakes, that are 20-30 acres in size and on smaller lakes we try to stock them with a little higher rate, simply because it is affordable so on a smaller lake, say a five-acre pond, we will stock them up to even 30 pounds to the acre,” Latona said. “At that rate the pond will have 150 pounds of trout stocked with the majority of them weighing about a pound and that is quite a few fish.”

The bottom line for using rainbow trout for stocking is that it is pretty much a seasonal deal and “put and take” scenario with knowledge that this specific fishery will be gone by May and June.  The cool thing is that it provides wonderful fun fishing in the winter months when the warm water fish are not as active and also some delicious eating.