Reef anglers who head out to the continental shelf and beyond have long been aware of the effectiveness of vertical jigging, but the relatively new gear and tactics used in a method known as “slow pitch jigging” is making the tactic much easier than ever before, and also more successful.

Not only that, it has proven amazingly effective on pelagic species including blackfin and yellowfin tuna, king mackerel and even the occasional wahoo—all species caught primarily in mid-water.

One key that has helped create this system, devised by Japanese anglers but rapidly exported worldwide, is no-stretch braided line like Mustad’s Tuf-Line. Tuf-Line’s XP line, like all braids, is made of Ultra High Molecular Weight Polyethylene, or UHMWPE fibers. The XP line is braided under high tension according to the company, creating more compaction of the fibers during the finishing process and a rounder profile than competitive lines.

The result is a line that’s more compact, smaller in diameter, packs better on reels, offers better knot performance, casts longer, reduces rod tip wraps, and shows higher abrasion resistance. Like other braids, it’s incredibly strong at extremely thin diameters and it has scarcely more stretch than steel wire, allowing a powerful connection to the fish that was impossible with high-stretch monofilament, especially at greater depths. 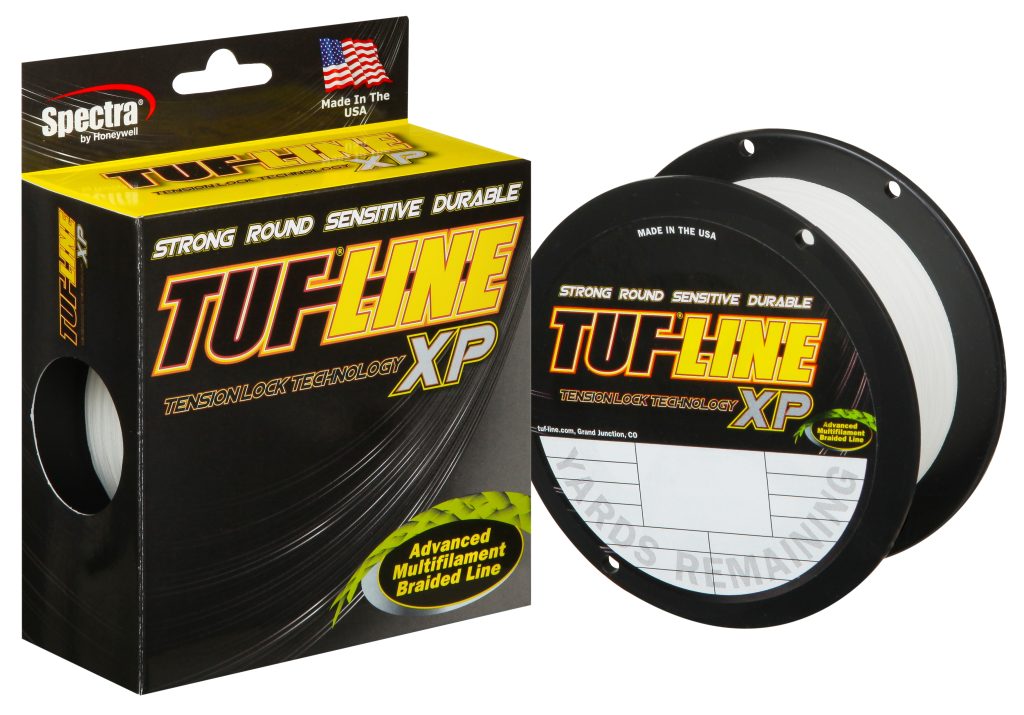 A no-stretch braided line is the best choice for your slow pitch jigging rig.

Braid like TUF-Line XP makes it possible to pack hundreds of yards of strong line on relatively small, light reels, so that the angler can easily handle the weight of the tackle during jigging. Line tests as low as 20 pounds are used, but with the rating system used for braid, the line more likely breaks somewhere around 28 to 30 pounds of direct weight, which allows putting a tremendous amount of drag on hooked fish with the relatively light tackle. The very thin line is a big advantage where current is an issue, allowing lures to get deep without excessive “kiting” behind the boat.

Unlike jigging with conventional heavy-weight offshore bottom gear and monofilament, the angler can fight the fish instead of the tackle when hooked up. When you pull the rod tip up a foot, the fish moves up a foot as well thanks to the no-stretch line.

TUF-LINE has also, recently, developed a new braided line specifically engineered for slow pitch jigging. The BLUE WATER SPJ BRAID creates an extremely thin, strong, and sensitive line that expertly links angler, jig, and fish. Lure control is maximized by reducing the ability of wind and multi-layered ocean currents to create slack or to sweep the jig out of the strike zone. At the same time, no-stretch BLUE WATER SPJ BRAID is exceptionally strong delivering superior tensile and knot strength to win toe-to-toe battles with saltwater giants. If you are slow pitch jigging, you need to have this specially designed line in your tackle box. 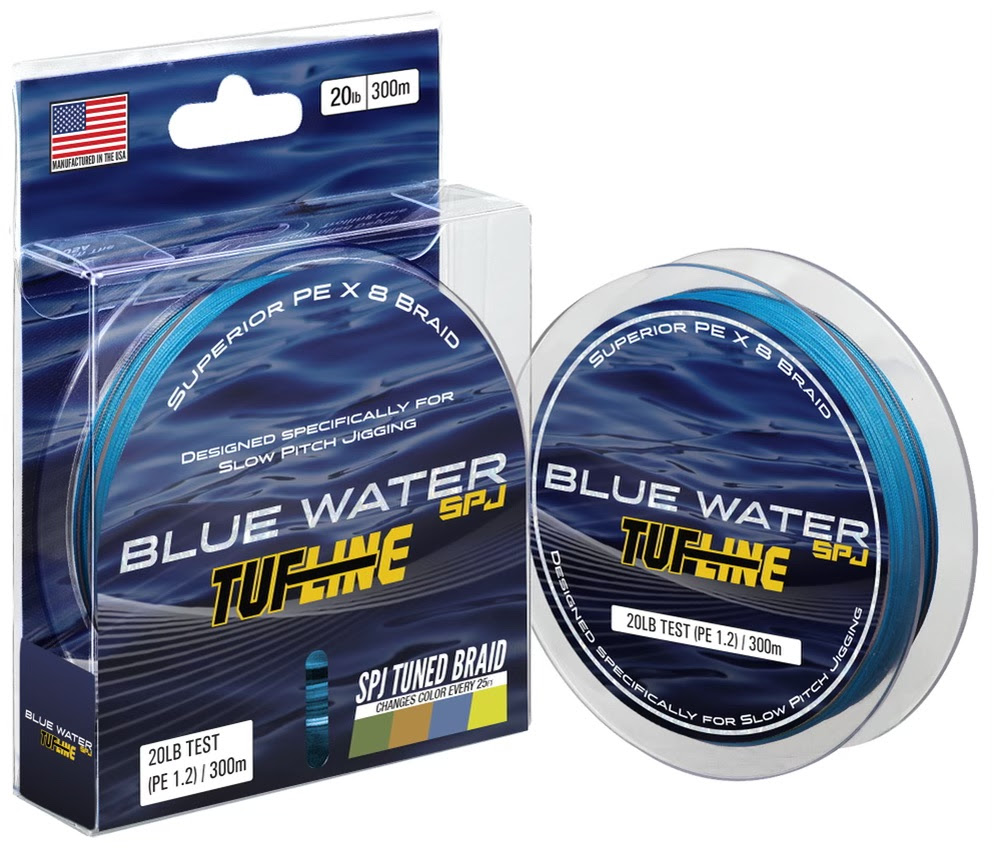 When it comes to the best slow pitch jigging rods, some of the slow-pitch jigging rigs would not look out of place on the front of a bass boat or flats boat.

Rods are typically 6’6” to 7’6” long, with an extended butt section so the rod can easily be tucked under the arm for pumping. The action of the rods would probably be designated parabolic or medium-slow. They flex over most of their length rather than just at the tip as in fast-action rods favored for casting most artificial lures.

Slow pitch jigging rods, available from many companies, are designated by the weight of the lures they’re built to be fished with. The rod is central to the slow-pitch tactic. It’s designed to lift the lure upward with the power of the middle part of the shaft when matched with the right weight of lure. On the other hand, a lure that’s too heavy won’t get much lift, while one that’s too light won’t flex the rod so it can do the work for the angler. 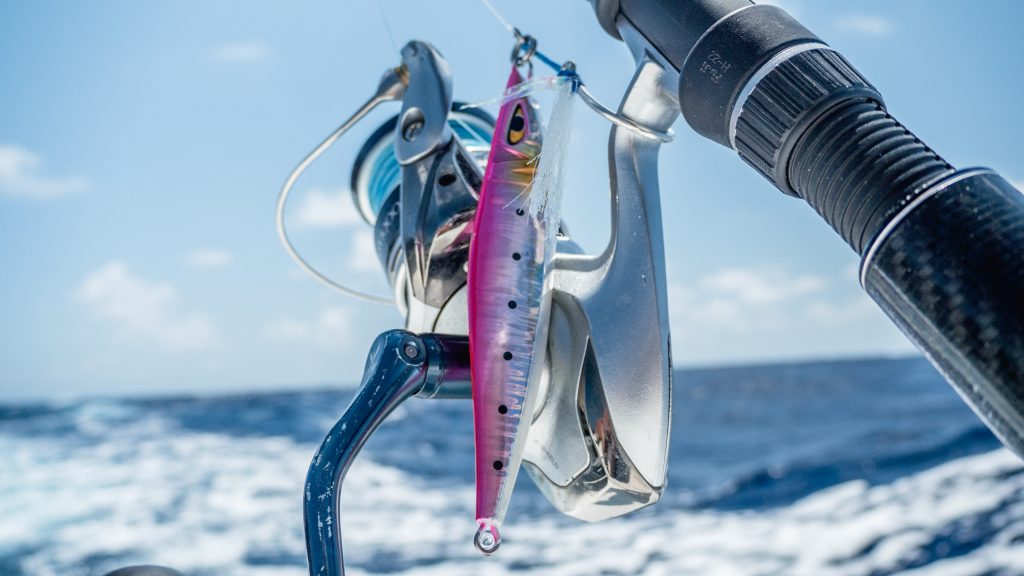 A high quality rod and reel are central to slow pitch jigging success.

Slow pitch jigging reels that work well are offered in both conventional and spinning configurations, and while they’re relatively small for offshore use, they do include heavy-duty machined gears and spools and powerful drags to handle the loads when a fish is hooked up.

The leader is typically 40- to 60-pound test fluorocarbon about 20 feet long. This is less visible than braid and also acts to stiffen the attachment to the lure so that it’s less likely to tangle than the very flexible braid. It also gives an angler a “handle” at boatside. A small diameter knot that will go through the guides like an FG or Alberto knot is used to join the line and leader.

One of the companies leading the slow pitch jigging revolution is Mustad. They make a variety of slow-pitch jigs these days, varying in weights from as little as 50 grams (about 1.7 ounces) to as much as 500 grams (just over 17 ounces). The lures are made of painted lead, often with florescent paint and/or chromed foil on one side to create a sort of off-and-on flashing as they flutter down.

A distinguishing feature is the hooking arrangement. Most are equipped with two single hooks attached to the upper eye of the jig with short Kevlar cords and welded steel rings. The hooks are typically extra-strong models in 1/0 to 5/0 depending on the size of the jig and the target species.

The hook setup not only keeps the lures from snagging in most cases when worked over rocks, coral or artificial reef rubble as they would with a treble hook on the tail, but also helps keep a fish from shaking free as they might if the hooks were attached with the usual split-ring arrangement. 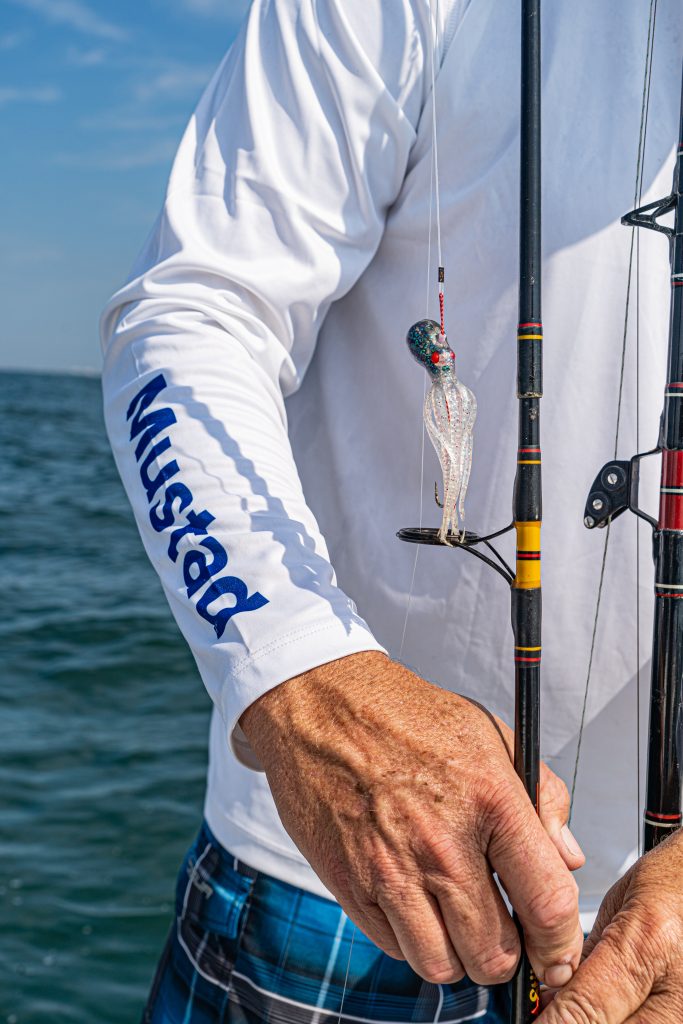 Mustad sells pre-rigged double “assist-hooks’ ‘ designed for slow-pitch jigs. The rig features a heavy-duty solid steel ring secured to the wide gap Mustad hooks with polyethylene and Kevlar materials. The assist hook setup has luminous beads to attract attention and create a striking point, and it’s available in 2/0 to 4/0 sizes.

Lures weighing 50 to 100 gram weight are typically fished in 30 to 100 foot depths, but can also be used near the surface to catch schooling fish like kings and tunas.  Lures weighing 150 to 250 grams and are designed to fish 150 to 300 feet deep for grouper, snapper and other reef species. Jigs weighing 300 to 400 grams are designed for 300 to 600 foot depths—and yes, that’s a whole lot of cranking without an electric reel.

The company also offers fully-rigged slow-pitch models including the Daggerman in weights from 100 to 320 grams. It’s front-weighted for a very fast drop, making it good for bottom species. The Mustad Rip Roller is available in 200 to 500 grams versions and is also designed to go down like an arrow for deep-water fish. On the other hand, the wider-bodied jigs like the Staggerbod  and Wingman tend to flutter and fall more slowly, and do an exceptional job on blackfins and other midwater fish.

Mustad also offers the InkVader Octopus jig, a soft plastic with the assist double hooks for slow-pitch action, available in 2 to 12 ounce sizes and it even squirts black ink!

We live in the high-resolution sonar age, so anglers often spot mid-water species like blackfins on the screen, drop the fast-sinking jigs down to their level, and then stitch the lures up and down in their face, using the action of the rod to flip them upward, then following the fall down with the tip and watching the line for any jump or “tic” that might indicate it’s time to set the hook on a fish. 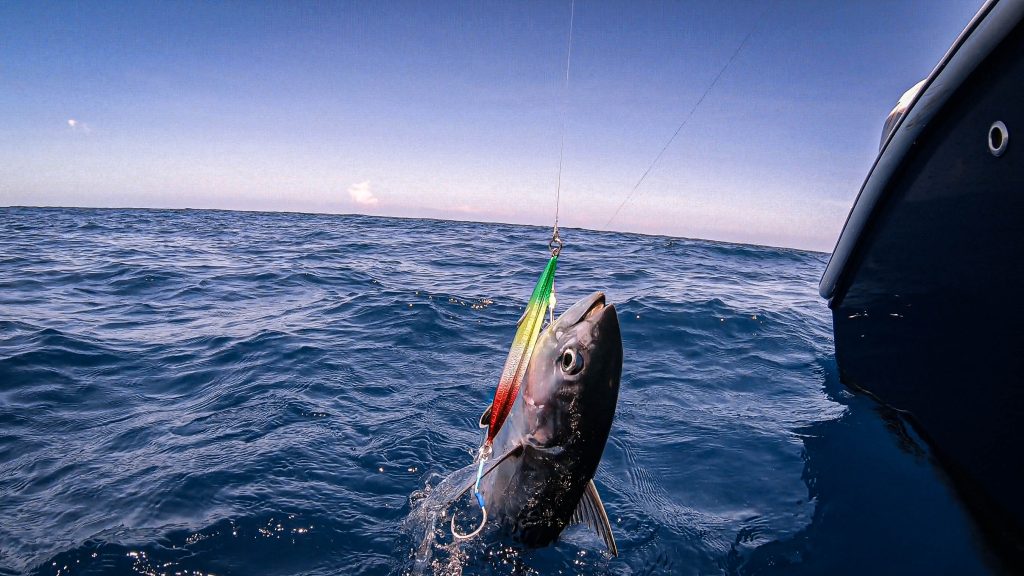 Slow pitch jigging is perfect for mid-water, as well as bottom dwelling species.

For bottom species, the lure is allowed to hit bottom, then “yo-yoed” up and down within 10 to 20 feet of the structure, again using the upward flip of the slow-action rod to flip it upward and following the lure back to bottom with the rod tip. The rod does a lot of the work.  You raise the rod at the butt, and the tip slowly flips the lure up off the bottom. In some cases, just a few rapid cranks of the reel is enough to cause the rod tip to flick the lure upward and start the action cycle that draws strikes. It’s very unlike the rapid action required for conventional deep-water jigging, and much easier on the angler.

The whole operation is much easier on wrists, arms and elbows than conventional jigging with heavy gear, and the fish apparently love the lures and the rolling, darting action they present. Many anglers into the tactic say they also enjoy the battle much more than on heavier tackle, particularly when mid-water species like tuna attack the lures.

A major part of success in a slow-pitch jigging setup is keeping the boat more or less directly over the jig. While this is not difficult when wind and current are moderate, it can be a real challenge in areas like the “Florida Current” where the flow moves at a brisk four to five mph at maximum. (The Florida Current is the arm of the Gulf Stream that flows between Florida and the Bahamas and then up the southeast coast before joining the Gulf Stream proper off Cape Hatteras.)

However, modern trolling motors with extended shafts designed for high-bowed saltwater boats and linked to sonar/gps units greatly ease boat control, allowing the captain to keep an eye on the angle of the lines going down and slow or increase the speed of the drift so that the angler stays more or less vertical above the lure. ( An experienced skipper with a sharp eye can do the same thing with outboard or inboard engines, but it’s a lot easier and quieter with help from the electronics.)