Where to Find the Best Tuna Fishing | Great Days Outdoors

Where to Find the Best Tuna Fishing

Where to Find the Best Tuna Fishing

The question of “where” is probably the most widely asked in fishing. After all, you’re trying to find the needles in a very large and deep haystack. Simply heading offshore without proper intel will lead to a lot of wasted fuel, time and energy trying to create the best tuna fishing trips.

When it comes to targeting pelagics in the northern Gulf of Mexico, tuna are the biggest draw without a doubt. During every month of the year, thousands of anglers gear up and watch for weather windows for their chance to head out and bring home the sushi. But no amount of preparation will yield results if the question of “where” isn’t answered. Local reports can help, but that often leads to use of the phrase “Should’ve been here yesterday.” Luckily for anglers, technology can help and is readily available. Don’t be part of the struck-out crew, use the tools available and bring home the tuna.

The northern Gulf of Mexico is home to several species of tuna, from the smaller skipjack and blackfin, to the mighty bluefin, but the main target is the yellowfin tuna. Yellowfin tuna are found worldwide in tropical and subtropical seas. They prefer water temps between 72-82 degrees but can tolerate ranges from as low as 62 to as high as 90. The smaller and more abundant blackfin has a similar preference in temperature ranges, making a tuna temperature chart very beneficial.

The heavy-bodied bigeye tuna is another prized species in our area and whereas they are often found in the same areas as the yellowfin and blackfin, they prefer somewhat cooler temperatures and are usually found deep, hanging below the cooler thermoclines. 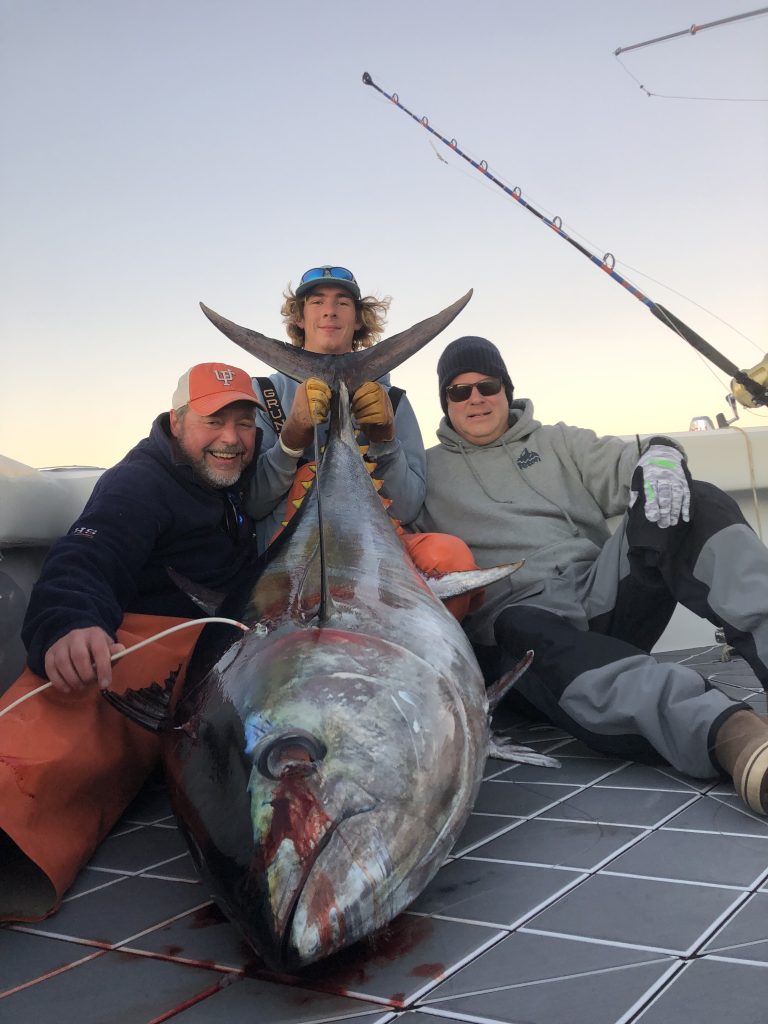 Knowing the temperature of the water is important when trying to find all species of tuna in the Gulf.

The Atlantic bluefin is a seasonal visitor to our area, and can thrive in a wide range of temperatures although larger adults prefer the cooler waters of the north Atlantic. Bluefin arrive into our waters in the spring, as part of their annual spawning migration. Due to this fact, bluefin tuna locations are difficult to pin down and they cannot be intentionally pursued in the northern gulf by recreational anglers, although a small quota for incidental catches is in place. These giants are truly legendary, and even a brief encounter with one is something that will not be forgotten.

(Editor’s Note:  On Sunday, April 17, 2022 three anglers while fishing on the No Name off the coast of Destin, Florida caught an 832 pound bluefin tuna which, if certified, will be the new Florida state record)

Where To Fish For Tuna: Eyes in the Sky

So many factors need consideration when considering where to catch tuna. These factors could be easily obtained if the tuna grounds were a mile offshore, but tuna fishing in the northern gulf means longer runs. With the Mississippi River and the Mobile Bay delta in our backyards, water conditions can change swiftly and the bite can shut down just as quickly.

The use of satellite imagery in fishing and fisheries management was popularized in the late 80s and since then, its use has become as necessary for offshore fishing as the boat itself.

In May, 2004, Thomas Hilton launched “Hilton’s Realtime-Navigator“, an interactive site that allows its subscribers to not only view sea surface temperature (SST) but also altimetry, salinity levels, chlorophyll, current speeds/direction and more. 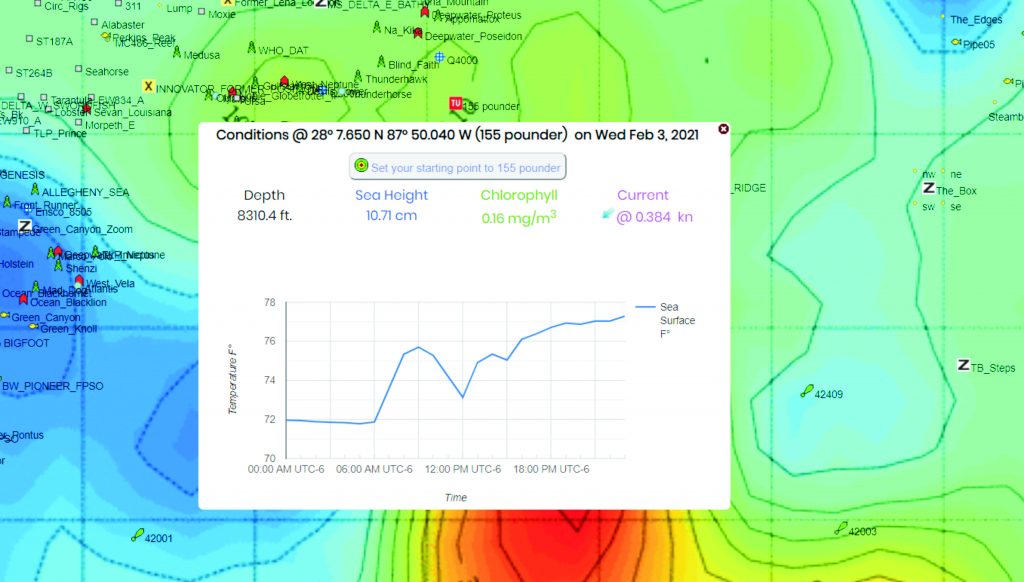 Having as much information as possible about the water quality when you head out to catch tuna will result in better targeted trips.

“Identifying good current areas is a start.” Hilton said. Hilton went in depth to point out that cross referencing the many overlays leads to better success. “When you can find current eddies that dovetail with good altimetry, you’re on the right path.”

Altimetry measures the height of the ocean’s surface. This tool is helpful in finding upwellings, where cooler seawater is pushed towards the surface by rising currents. Upwellings are typically active areas for gamefish. The colder water rising towards the surface brings different nutrients upwards and builds the food chain.

On the opposite spectrum is a downwelling, where converging surface currents actually force water downward. Downwellings are notoriously poor areas for sport fishing.

“Upwellings are very active areas, but typically you want to fish the perimeter of these areas, not in the center.” Hilton noted.

Chlorophyll output is another important tool in finding tunas. Chlorophyll output can be directly related to water color. The higher the output, the more nutrient rich the surface water and generally the dirtier it will be. While blue water is more appealing to look at, tuna can often be found in relatively dirty water.

“Even if the layer of water on the surface is dirty, it can be riding atop clean. high salinity water that sits below.” Hilton pointed.

In my own experience, I’ve found and caught plenty of tuna in very dirty water that was within close proximity to the edge of cleaner water. It’s for this reason that I commonly track the movements and patterns of higher salinity water. 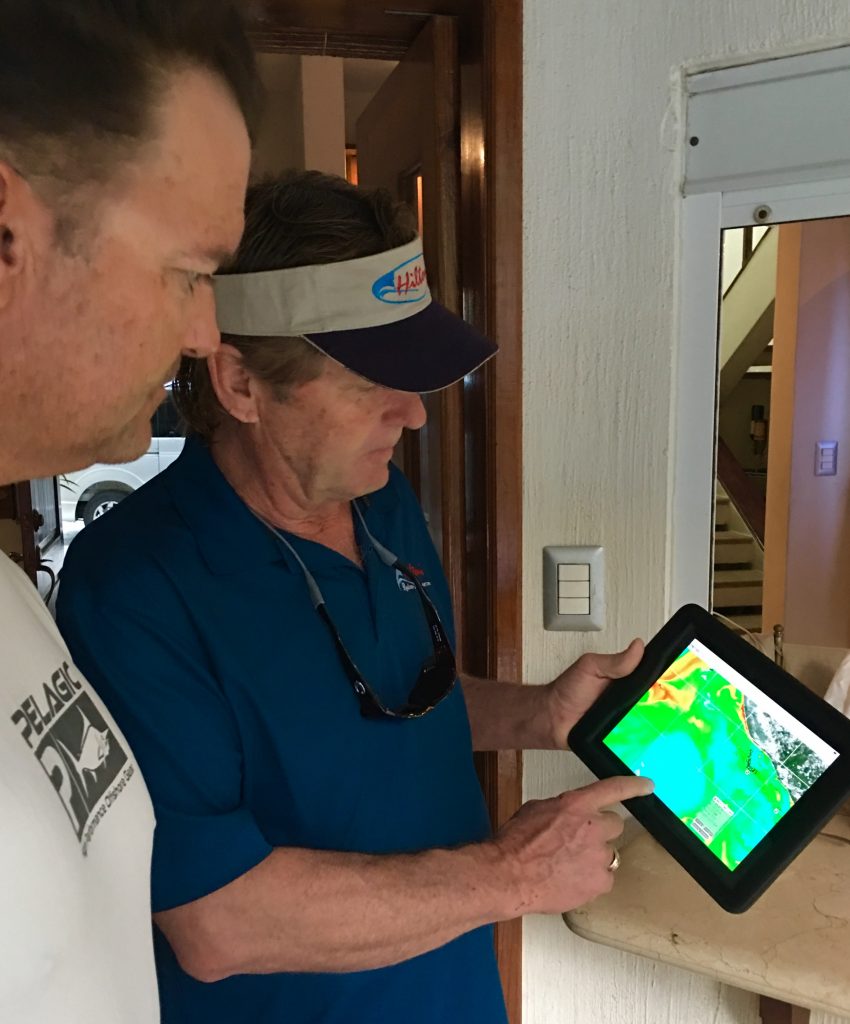 Hilton’s Realtime Navigator gives you all the information you need to chart an efficient tuna fishing trip before you leave the dock.

“Drillships and semi-submersible platforms create current with their massive thrusters. Currents help generate predatory activity and this “artificial current” can be enough to hold tuna to a given platform.” Hilton explained.

Captain Adam Peeples operates “One Shot Charters” out of Destin, Fl. Whereas many regional tuna anglers head straight to the rigs, Peeples spends a lot of his time closer to home, working open waters near the Spur, the Squiggles and the Okaloosa County Fish Aggregating Device (FADS). Peeples is now running into his 10th season and has relied on Hilton’s Realtime-Navigator throughout his charter career.

“I don’t leave the dock without checking Hilton’s imaging first.” Peeples said. “In the open water I usually fish, even the slightest change in water temperature, salinity or altimetry can make the difference.”

Peeples tries to find tuna in converging zones, where areas with preferable current speeds of .5-1kt overlay with the edges of temperature breaks and upwellings.

“When you can find two or more optimal factors coming together offshore, you’re going to find tuna.” Peeples said.

How to Target Tuna

When I’m asked “What is the best technique for targeting tuna?” I can’t help but respond with “Every technique.”

Tuna are a species that can require five methods of angling in one trip so it’s best to go prepared and be ready to throw everything plus the kitchen sink at em.

When asked what his favorite method for tuna fishing is, Peeples replies without thinking; “Live bait is where it’s at.”

For live bait, Peeples likes to fish a variety of baits that he catches nearshore on sabikis, as well as whatever live bait choices that are abundant in the area he’s fishing offshore. Cigar minnows, blue runners (hardtails), small bonito, blackfin and many other forage species may be on the menu. Tunas are very prone to keying in on certain baits, so match-the-hatch can become critical.

Peeples likes to rig his live baits on various sizes of Mustad Demon circle hooks, and using the heaviest fluorocarbon leaders he can get away with. 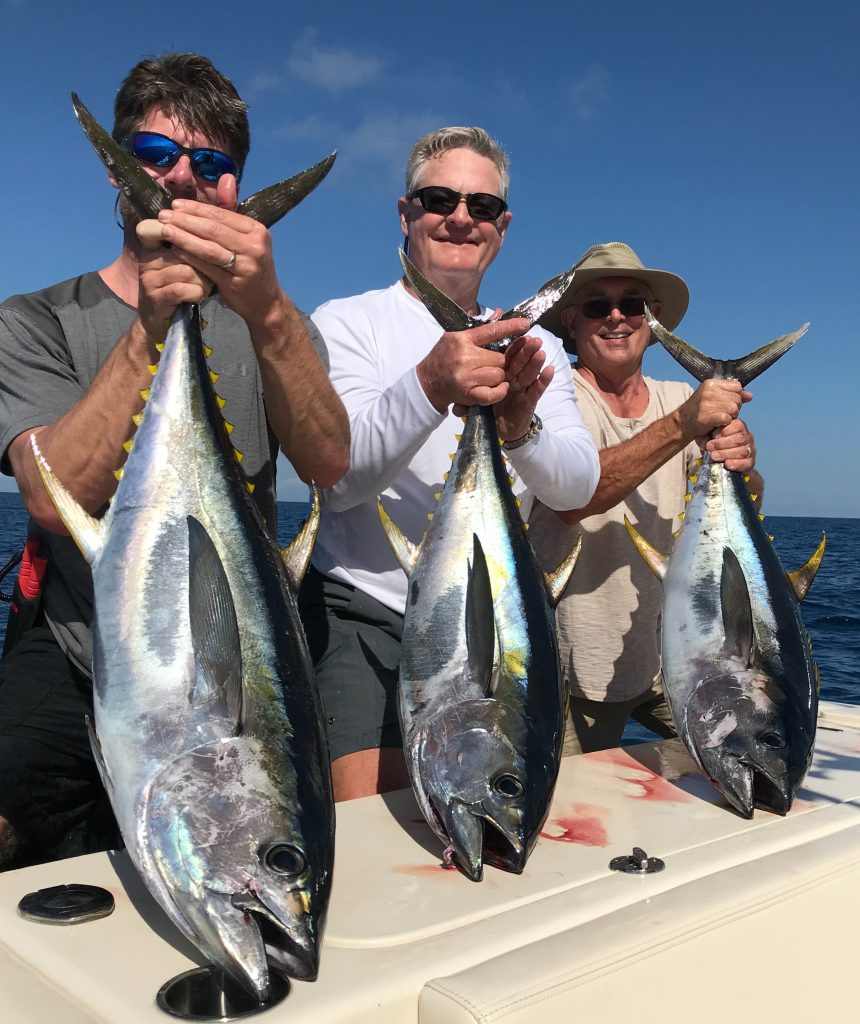 Tuna are fun to go after because of their explosive bites and hard runs.

“I usually start with 80 pound but will go up if possible,” he said.

Baits can be hooked a few different ways, but Peeples prefers to bridle them, so that the hook is unobstructed and swings more freely.

Chunking is another, extremely productive technique for tunas, both around structures and in open water. Around structure, tuna will typically hold upcurrent and it pays to start your chunk line well up current of where you are marking fish.

Trolling small ballyhoo, both “naked” and behind small skirts and dusters, is a great way to find tuna on the move or when the obvious signs aren’t present.

Regardless of the technique being used, it will always be worthwhile to keep a couple, heavy, spinning outfits rigged with topwater poppers in the instance that tuna begin crashing bait nearby. This style of tuna fishing isn’t for the faint of heart. A big tuna inhaling a topwater on casting gear is something no angler will ever forget.

Staying Ahead of the Curve

Hilton continuously upgrades his site with the latest features and tools to help anglers find tuna and other gamefish. In addition to tweaking already existing functions, Hilton is always looking for more tools to give subscribers the edge.

“We are always looking for ways to improve the existing software and to make it compatible with a wider range of electronics.”

One thing is for sure, given the current prices for fuel and the constant monitoring by anglers for the perfect weather window, the hunt for tuna is a costly endeavor. Every advantage is needed. Never head out blind again.

Chris Vecsey
Chris Vecsey is a life-long angler and USCG licensed captain. He is a tackle salesman at Sam's Bait and Tackle in Orange Beach, Al as well as a writer/contributor to numerous fishing magazines and podcasts. He spends extensive hours on the water chasing numerous species and going broke in the process.