Autumn is likely the most overlooked fishing season along the Emerald Coast, mainly due to other distractions like school, hunting, football, etcetera. But skipping fall surf fishing means folks are missing out on some of the best surf fishing of the year, as conditions are changing for the better for several reasons.

In late summer as daylight hours get progressively shorter our days are typically not quite as hot, and often are drier. Various fish species sense the changes and begin making plans for the months ahead when the environment will not be as warm, nor food as plentiful. So this provides anglers with a variety of pre-fall opportunities that continue through the succeeding months. That is until the prey items are exhausted or conditions change to the point the fish move on.

By Labor Day beach fishermen may witness more ‘blitzing’ behavior from jacks and even mackerel and redfish as the surfzone fills with more young of the year (YOY) herbivorous fish like herring (LYs), spot croaker, mullet and such. Once these baitfish begin staging in the surf, the fish that prey on them naturally follow.

Any structure (hard or soft) along the beach that holds or attracts these baitfish is a good spot to try for bluefish, jacks and mackerel at some point during the day. This time of year our tides are typically high in the pre-dawn hours, with a falling tide all day until late afternoon or early evening. So the best time to catch fish feeding at these locations is often very early, or very late during daytime hours. 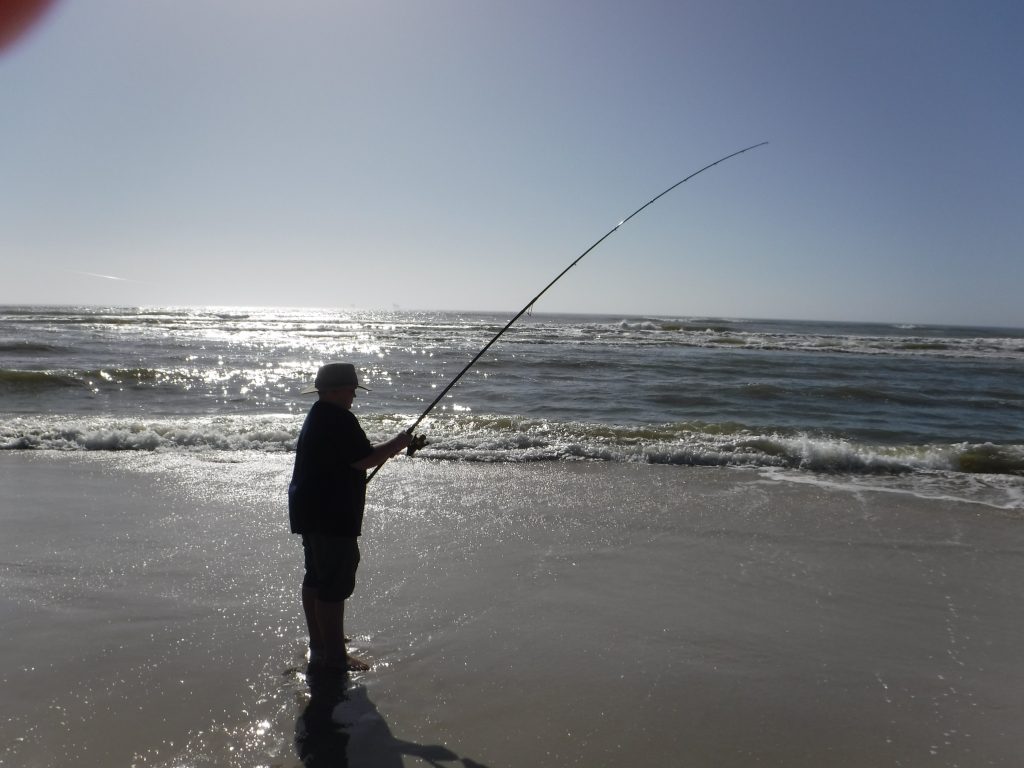 Utilizing the onsite bait source may work for your fall surf fishing setup, maybe even work as well as casting similar looking artificial lures. Spoons of about the same size and shape as the baitfish will get the attention of predatory fish while covering more water, especially if you have to search for them. Medium sized plugs like MirrOdine or Rapala X-Rap may work well too. Even topwater plugs often catch fish in the early-early morning under low light conditions.

Soft plastic minnow imitations (like the Zoom Fluke) on a lead head jig work for a variety of species including redfish, speckled trout and flounder. Bubble Rigs cast from the beach can be quite effective for schooling fish that are chasing minnows in the surfzone.

Soon after the the Autumnal Equinox, cooler drier continental air will periodically move over the region. Our water temperatures drop in a stair step manner as successive fronts usher in progressively cooler air. Once the water cools below 80 degrees most species in the jack family will school up and migrate eastward toward the Big Bend region of Florida and eventually southward along the Florida Peninsula.

Many mackerel follow a few weeks behind them, though there may well be some ‘stragglers’ even into early winter if our water temperature remains mild. But as these pelagic fish move out of our area, it becomes progressively easier to target the ‘resident’ fish species. These include pompano, bluefish, and the various species of drum native to the region.

Anglers would be most familiar with black and red drum (redfish), the kingfish species (Gulf, Southern and Northern) often called “whiting” or “ground mullet”. Also, croaker and spot croaker, flounder and seatrout: Spotted, and the Sand or Silver seatrout commonly called “white trout”. All of these can be caught on artificial lures, but are much more commonly targeted or caught using dead bait, usually shrimp on bottom. As our coastal waters cool off and pelagic fish migrate away, Florida pompano become the primary target species. 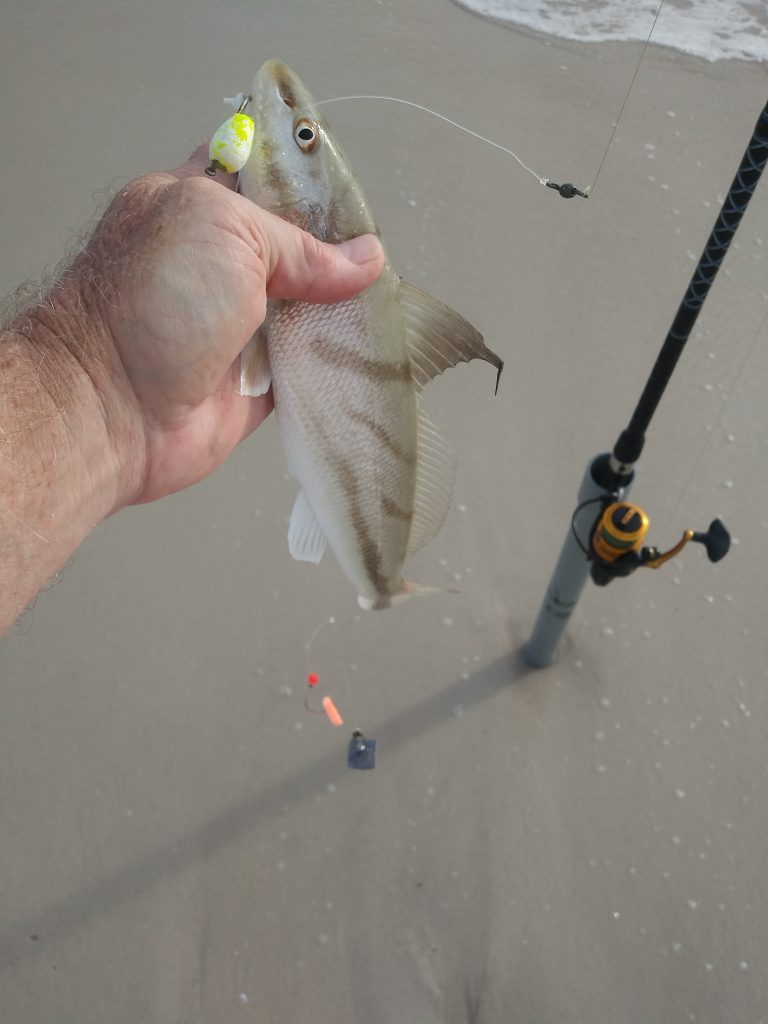 Northern kingfish are one of the best looking fish in the surf.

Diet is ultimately what makes this member of the jack family so popular. They primarily eat crustaceans (crabs and shrimp) along with mollusks (clams) and other small invertebrates that live in the surf zone. Thus their flesh is lighter color and firmer texture, and ‘sweeter’ tasting that other jacks which mostly eat smaller finfish. This exclusive diet also makes pompano easier to target for shore bound anglers who land the bulk of them caught each year.

Their nutritiously rich diet also helps them grow quickly. Most spawning occurs after the Spring Equinox in mid to late spring, coincident with the spawning and growth of various benthic invertebrates inhabiting the surfzone. They grow quickly, along with their food sources throughout the hot summer and into the cooler fall. Most pompano reach sexual maturity, and harvestable size at or soon after their first birthday. So much for the innocence of youth!

One of the most effective and widespread methods to catch pompano is by use of the double dropper “pompano rigs”. These popular and diverse rigs often use small, various colored floats or beads to attract the curious pompano to the bait (and hook). Even the hooks styles vary, as some anglers prefer kahle hooks, while others like circle hooks better. Either way, the code word for effectiveness seems to be “small’.

Pompano have a relatively small mouth, from the size of a quarter to maybe a fifty cent piece. So the overall size of the bait “gob” should not exceed that diameter because pompano lack teeth to bite the bait into small pieces. That is when the bait is often nibbled or pulled off the hook. In fact smaller bait morsels like immature mole crabs (“sandfleas”), ghost shrimp, and inch long Coquina clams make up the bulk of their traditional diet. So making your bait resemble what pompano are used to eating is a key to success in the fall, as well as throughout the year. 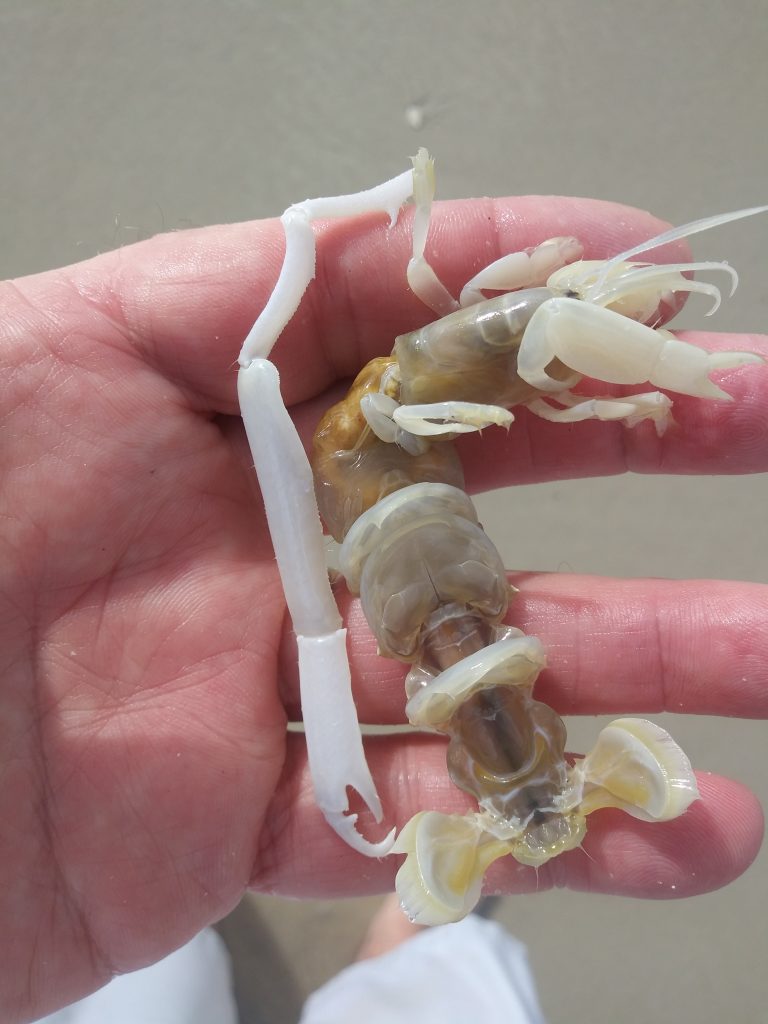 Beach Ghost Shrimp are the primary prey item for many fall predators.

Being successful while fall surf fishing in the fall often means adjusting to changing conditions as the air and water cool off. The successively stronger cold fronts that bring in cooler air are often preceded by moderate to strong onshore winds for several days. While this may dingy the water, it also affords anglers opportunities to find fish bunched up in feeding locations like the back side of nearshore sand bars. Actually, fish will be feeding just inside the longshore sandbars along the coast as waves dislodge food items and push them into the trough.

The fish wait there in relatively calm water for the ‘wave conveyor current’ to bring the food to them. Any of these ‘feeding spots’ within casting distance from shore are “money in the bank” for surf anglers seeking bent rods. Some of these locations continue to attract fish after the front has passed and the waves get progressively smaller. The shallow water sandbars that make even one foot swells break are usually the best spots to catch pompano, whiting and other surf fish between fronts.

The Pressure Is On

There can be no doubt pompano popularity has exploded over the past 10 to 15 years. Not only are more people coming to visit and live along the Emerald Coast, but the number of anglers targeting pompano on a regular basis has increased exponentially. So how can this complex fishery, poised precariously on the edge of the Gulf continue to flourish in the face of such increasing fishing pressure? 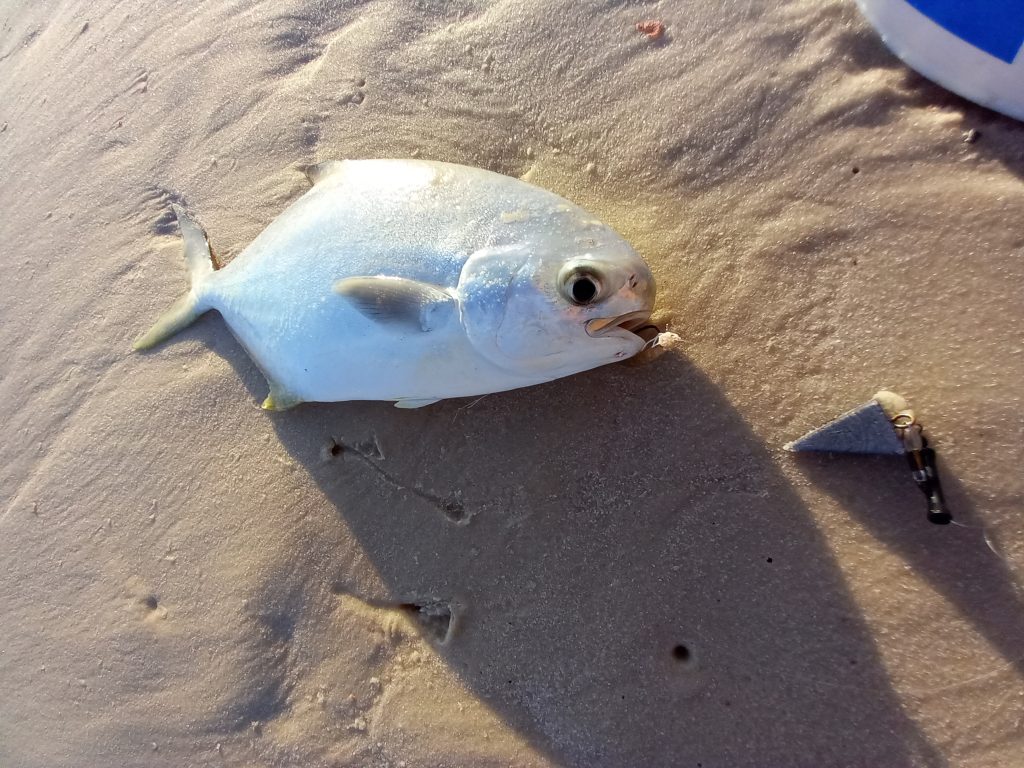 The traditional method is for the coastal states to control the overall harvest with creel limits and both size and number limits differ from state to state and rarely change. Another method is to encourage anglers to practice more catch and release with these (and other) fish. Everyone has different mindsets while fishing, but limiting our catch is way better for the fishery than catching our limits each time we fish!

A particular approach to aid the fishery has been undertaken by the Alabama Department of Conservation and Natural Resources – Marine Resources Division (ADCNR-MRD) at the Claude Peteet Mariculture Center in Gulf Shores. A program has been in place for several years there that has bred, raised and released about 120,000 Florida pompano into Alabama waters hoping to enhance their population.

This effort has been backed and funded in no small part by contributions and involvement from Coastal Conservation Association of Alabama. CCA – AL has invested money for tanks, pumps, filters, and such to aid the CPMC in building up their facility to expand their effort. Plus they also breed red drum and flounder at the facility to release into the wild. 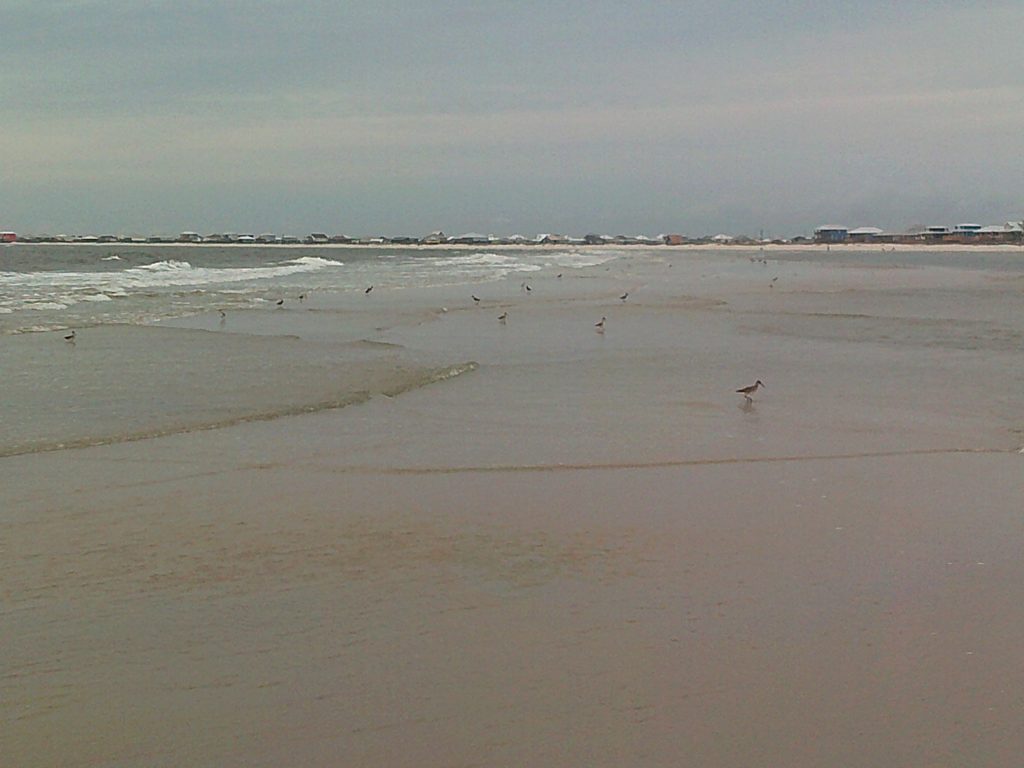 Willets and other wading shorebirds can show you where ghost shrimp are.

CCA Alabama Executive Director Blakeley Ellis mentioned “local money raised here, stays here to help build and support programs like this.” So money from CCA license plates and fundraisers can be used to enhance our natural resources. Also CCA acts as the vehicle to get scientists and anglers together to help achieve those goals.

As a result, 56 live pompano were collected by AL MRD personnel at several locations, on a number of different days. This despite what Chris Vecsey at Sam’s referred to as “some of the worst pompano fishing weather ever.” It is hoped the media exposure from events like this will spark angler interest in all manners of conserving our great fall surf fishing into the future!