Growing up in southern California, Mark Daniels Jr. learned about fishing from his dad. Daniels now calls Tuskegee home. When not on the BPT Tournament Trail, Daniels can be found fishing Lake Martin and the Coosa River lakes where bass can be caught year-round, especially when using his five best bass lures for summer.

In 2013, he won The Bass Federation National Championship where he competed the next season on the FLW Tour. Daniels qualified for the B.A.S.S Elite Tour in 2017. He took the first-place Elite trophy on Lake Oahe in SD in 2018.

“Summer bass fishing on any lake can be tough,” comments Daniels. “But, during the summer months that’s a tough time of year. Bass can be finicky and sometimes a challenge to locate.” 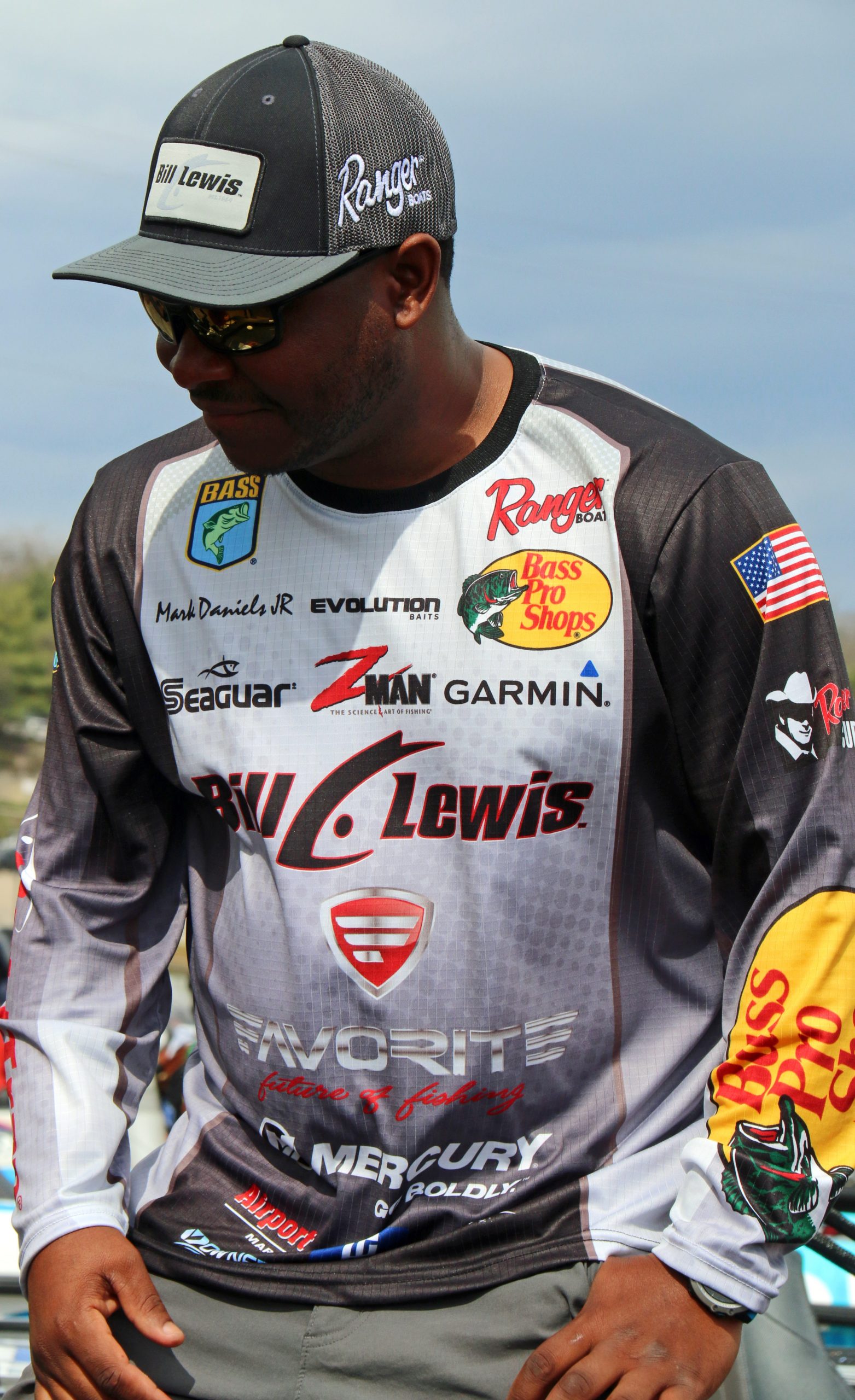 After the spawn and the weather heats up, bass fishing on many lakes gets tough. Early morning can offer a brief period of some action and a short reprieve from the heat. However, certain lures and techniques can help anglers fill out limits of bass during the summer doldrums.

Getting on Top Early

The start of a new day on the lake in the summer is the perfect time for some topwater action. Daniels mentions that every bass angler needs a couple of topwater baits for early action. Bass will school up shallow and feed in a frenzy creating plenty of surface action. 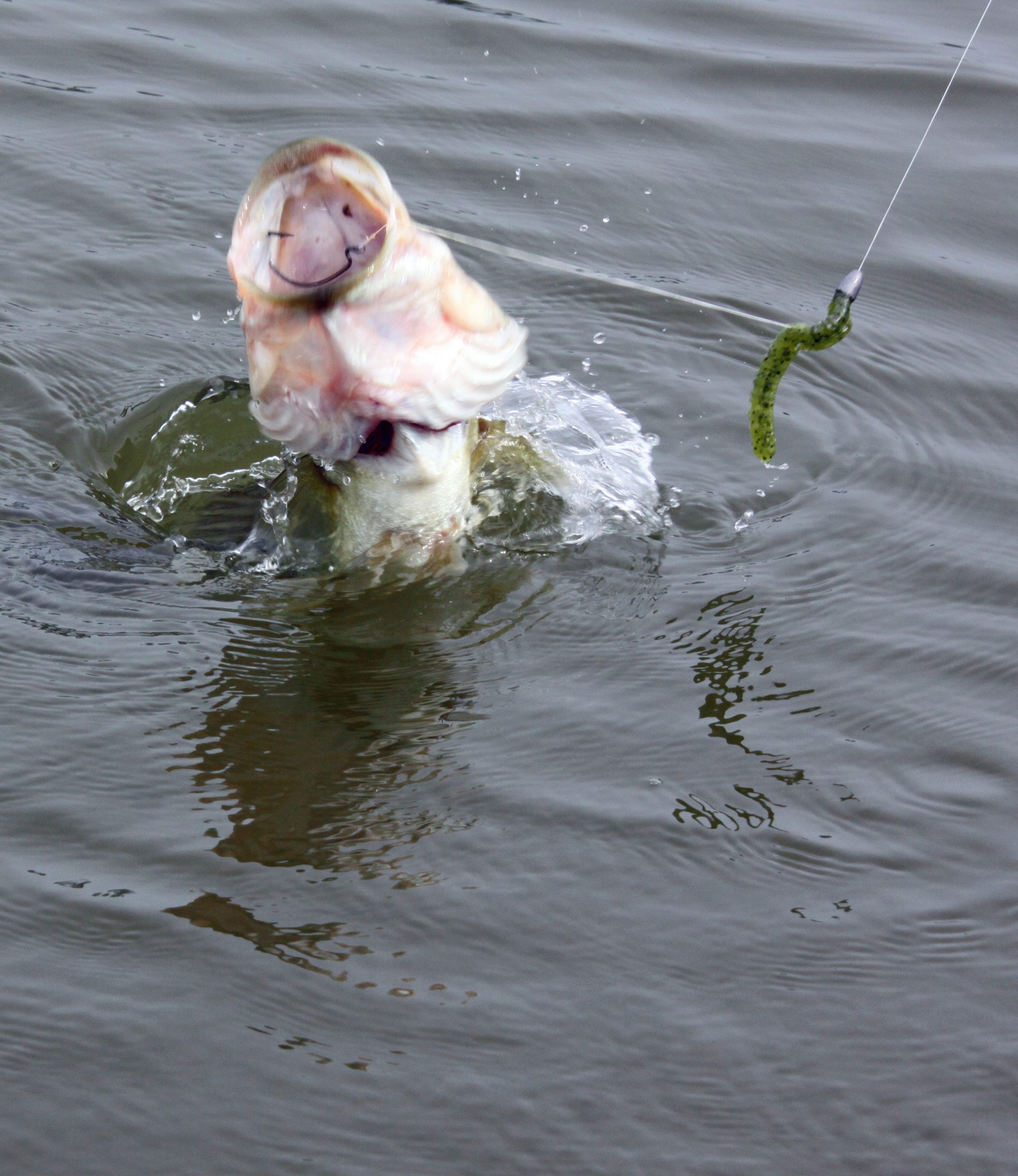 Main lake points near deep water are areas to target first. Long flat points are other areas for topwater action. Bass will push shad and other baitfish up on the point to make them easier to ambush. Look for gulls or other birds that may be diving to the water to feed on the shad.

A medium-heavy rod with a fast-action tip is prime gar for topwater lures. A quality casting reel spooled with Seaguar braided line is the choice for Daniels. The braid transfers hook-setting energy to the lure, especially on long casts.

On large reservoirs, small, quiet shallow pockets can hold bass early. Fish your way to the back while looking for any baitfish activity.

“A topwater stick bait, popper or buzzbait is a good choice for action early in the day,” reports Daniels.

Lure color is generally not critical in topwater baits. Shad or perch colors are common choices for anglers on most lakes. In clear water Daniels usually will cast a solid white stickbait or shad colored popper.

One lure Daniels always has tied on for summer bass catching is the original Rat-L-Trap, which is the original lipless crankbait. He says the lure is versatile and can be fished using several different methods. Common sizes for Daniels are a or ½-ounce or ¾ ounce but sometimes he will drop down to a ¼ ounce Tiny Trap depending on the water clarity and baitfish size.

“Anglers don’t need a ton of colors in the Rat-L-Trap,” advises Daniels. “I will stick with basic colors that will allow me to fish most any situation I encounter.”

Shad colors in the silver or gold chrome are good choice for almost any lake. Perch or bluegill patterns are the ticket for lakes where bream are the dominant baitfish. Crawfish patterns in orange, red and brown hues work well in stained water. 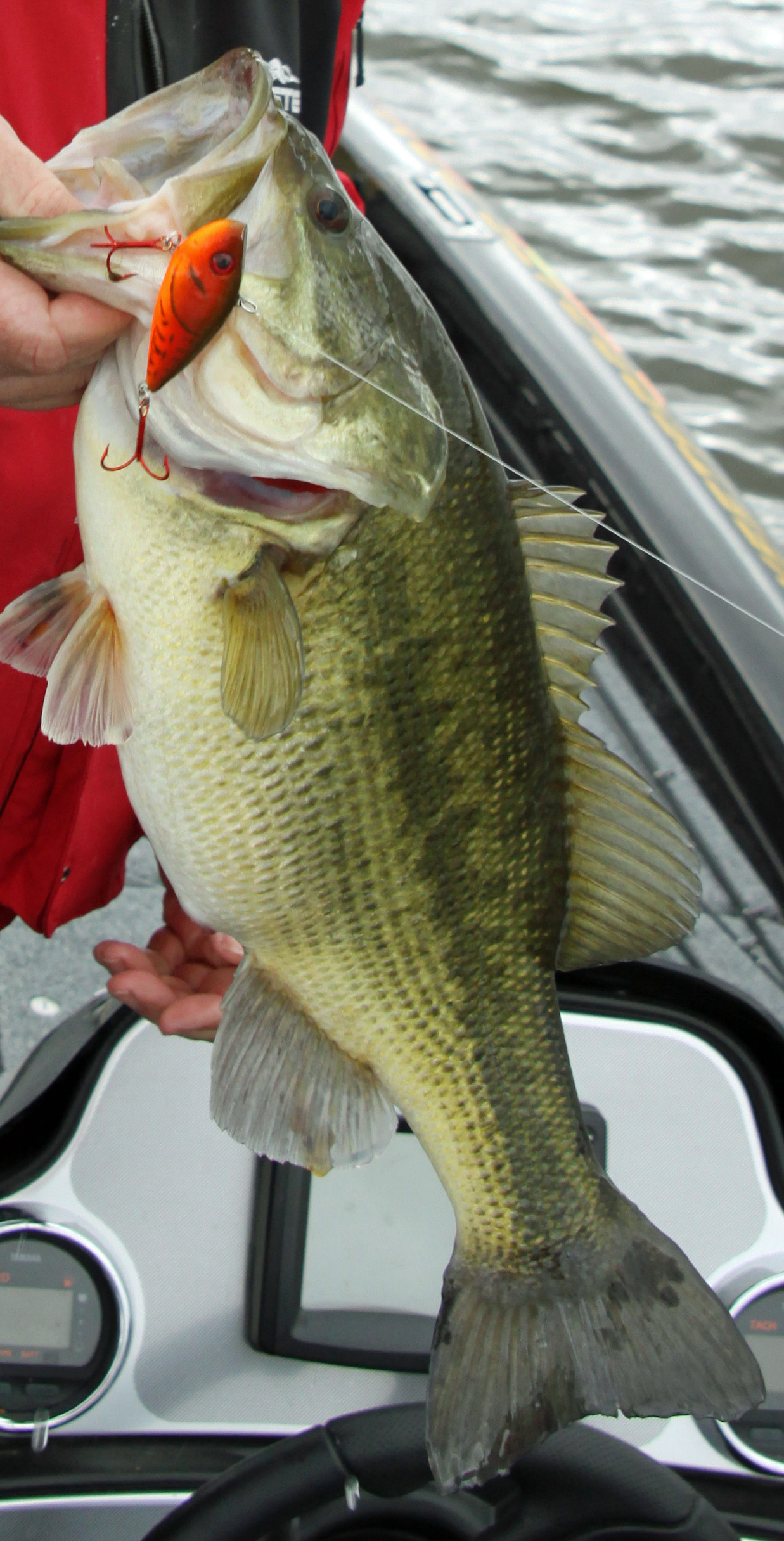 Lipless crankbaits like the Rat-L-Trap are one of the top summer lure favorites for Mark Daniels Jr.

There is more to fishing a Rat-l-Trap than casting and reeling back to the boat. Although that is an effective method, Daniels takes it one step further. He will “burn it”, retrieving the lure super-fast on a high-speed casting reel. Holding his rod tip high, the lure will skim along just underneath the surface. This is a productive method, especially when bass are schooling.

Another method employed by Daniels during the summer months, is to cast the lure out, start the retrieve and after a few turns of the reel handle, pause for a few seconds. The lure will stop and begin to sink. This action emulates a dying or injured baitfish.

On deeper points and along creek and rivers ledges around 20- to 30- feet deep, Daniels recommends allowing the Rat-L-Trap to sink for several seconds before starting the retrieve. A slower, more constant retrieve will draw strike from bass suspended in deeper sections of the water column.

“I like the old-style colors of the chrome/blue back or chrome/black back,” Daniels reports. ‘When the bass are schooling keep the traps moving.”

Daniels mentions there are different models of the Rat-L-Trap. The original model has several BB type rattles embedded in the body. Also, there is thumper model that has only one rattle. The stealth model has no rattles inside the lure and runs silent.

Bass love cover anytime of the year, and this is especially true during the summer. Rock piles, stump rows and brush tops are prime locales to find bass in the summer. Daniels advises you need a natural looking bait that can get in the face of the bass.

“You’ve got to have a big worm fishing for bass in the summer,” Daniels explains. “This is especially true when fishing brush piles.” 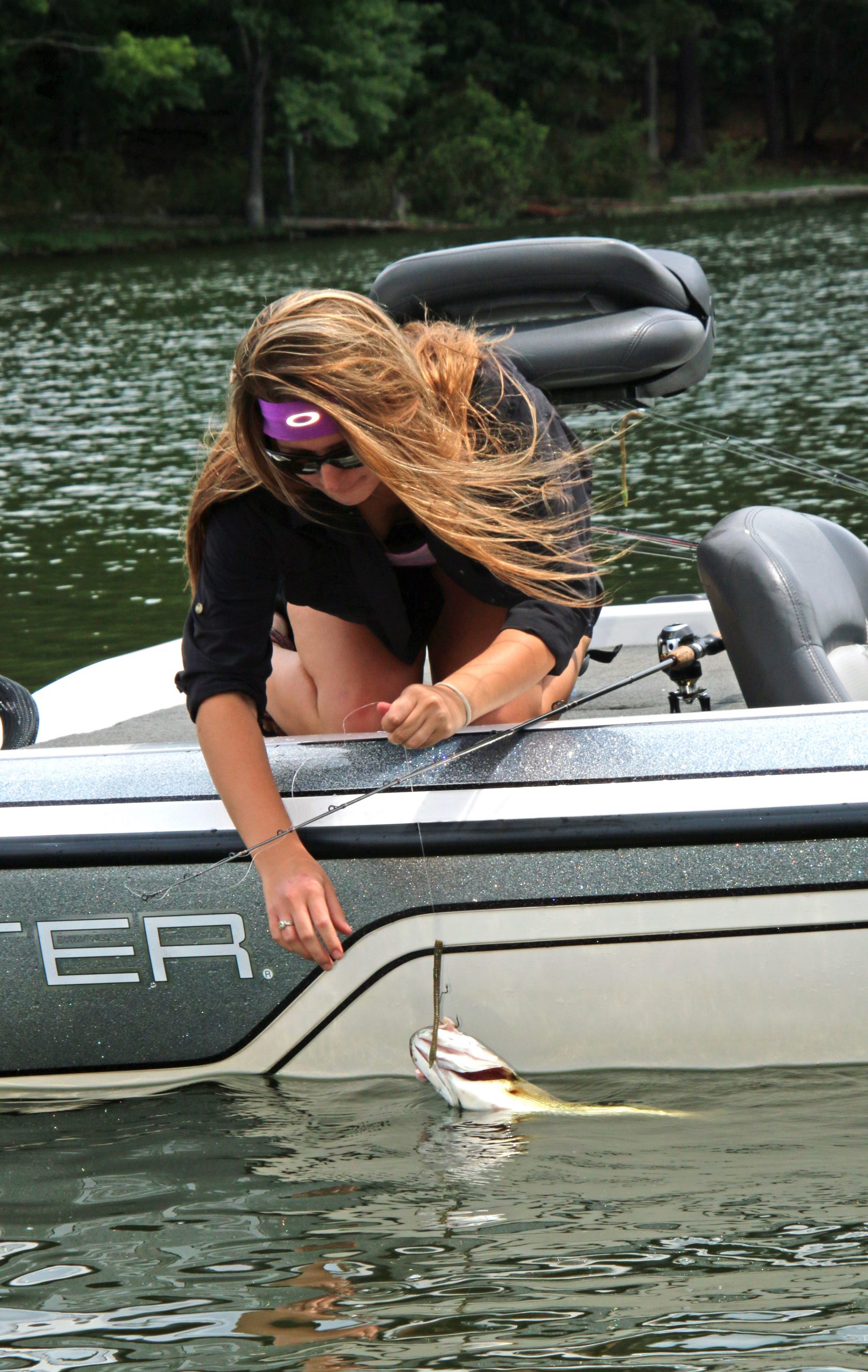 Soft-plastic worms around 8 to 10 inches long are a top choice. Daniels usually rigs these Texas style with a large Owner hook with a  ⅜ ounce tungsten weight. He advises to cast beyond the target and allow the worm rig to fall to the bottom and slowly hop the worm into the brush pile.

He also recommends fishing the brush pile at different angles. The bass can hold in different spots around the brush and are not always facing the same direction.

Dark colored worms usually perform the best around brush tops. Purple, black or green pumpkin colors are at the top of the list. In clear water Daniels will opt for Seguar fluorocarbon line. This line allows for a good hook-set, is invisible to the fish and is abrasive resistant.

Another lure Daniels likes for summer bass fishing is the Ned Rig. This is a finesse bait consisting of a mushroom shaped head jig and a short, cigar shaped soft-plastic worm.

“The Ned rig is light weight with  ⅛ to 3/16  ounce head and a 2.75 inch TRD worm from Z-Man,” Daniels reports. “I’ll fish it on spinning gear with Seguar braid down to a fluorocarbon leader.”

Daniels mentions for finicky summer bass to fish the rig slow with a small twitch of the rod tip to hop along the bottom. He prefers natural colored lures in watermelon or green pumpkin. 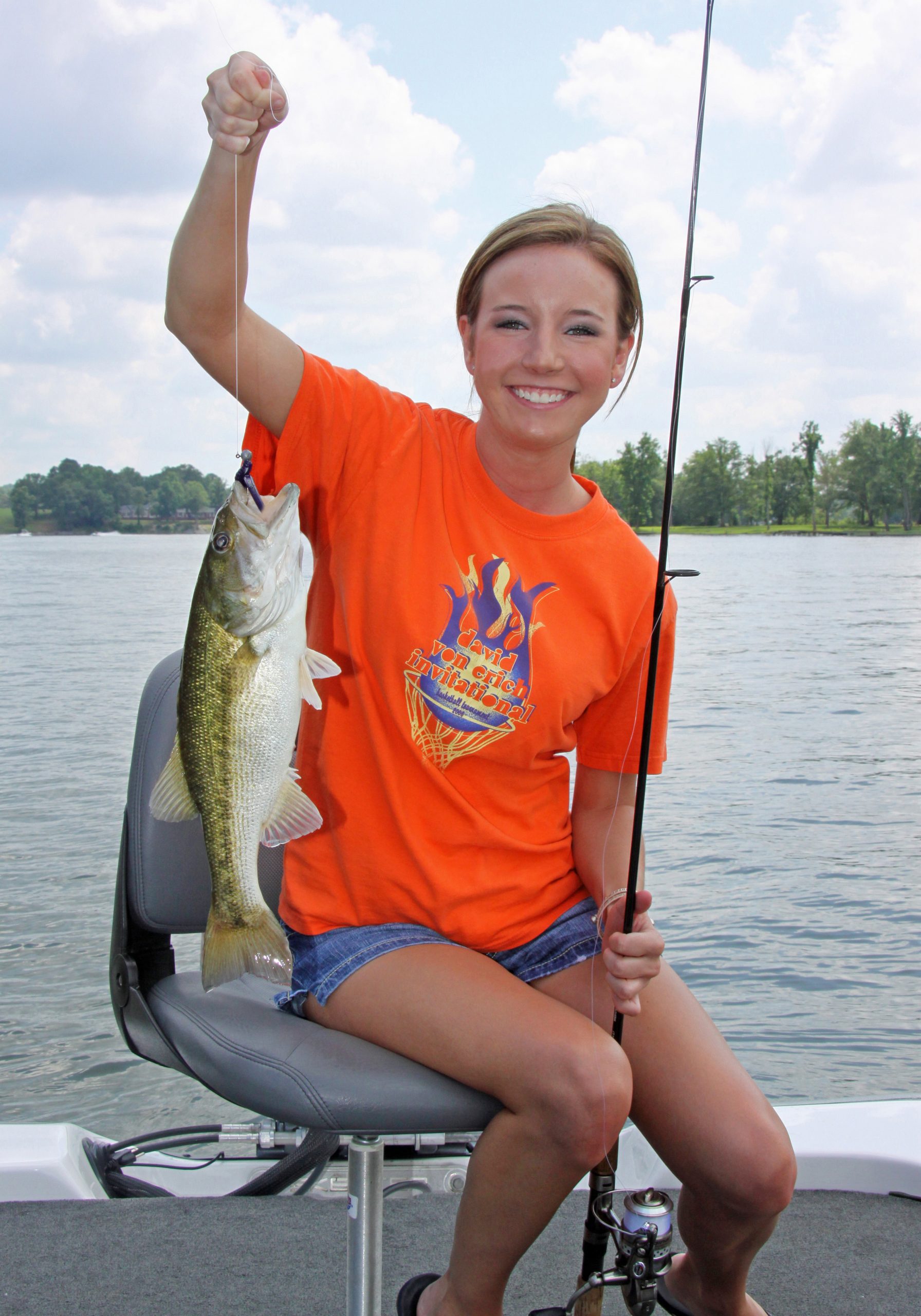 Anglers can employ the Ned Rig for hard-to-catch summer bass on any lake.

If the fishing is really slow and the bass are suspended, Daniels will drop in a drop shot rig. He uses 6 to 8 pound-test fluorocarbon line. His weights will vary depending on water depth but ⅜ ounce is a starting point. He usually has his weight around 14 inches below his 1/0 Owner hook.

Daniels will fish the drop shot vertically down to around 20 to 30 feet in the water column. A slight twitch or light bounce of the rig will help trigger strikes, which are usually very light. He will also cast the ring across a deep point and drag it slowly back to the boat. 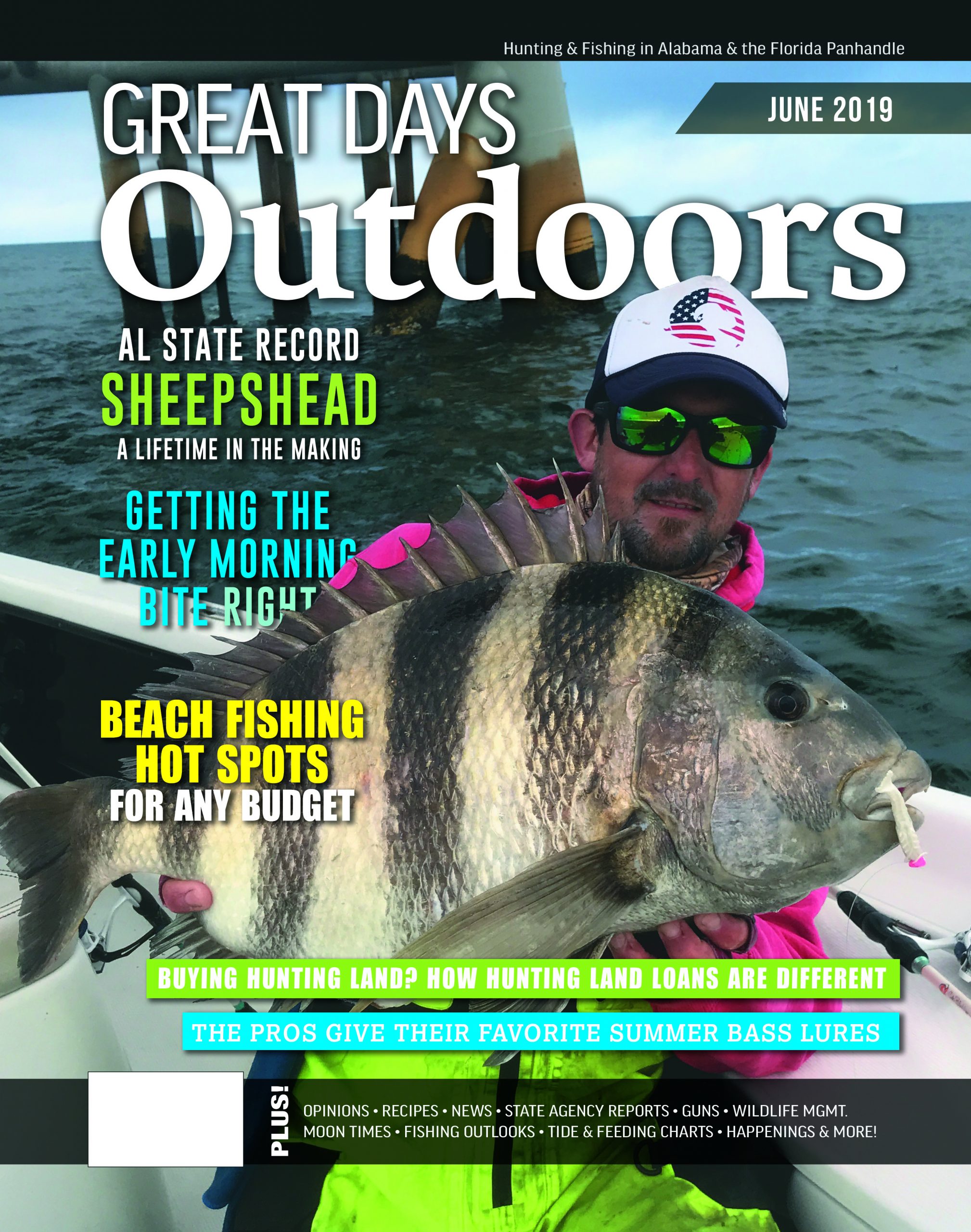 This article first appeared in the June 2019 print issue of Great Days Outdoors Magazine. For more great hunting and fishing content for the deep South, subscribe to Great Days Outdoors print and digital editions or click the image to download this issue.