Almost two decades ago, Thomas Hilton started his in-depth study of how newly-available satellite data could be applied to offshore fish mapping, and began to incorporate that data into a service that became Hilton’s Realtime Navigator.

“We started out advising just a few tournament anglers for one event,” recalls Hilton. “Those boats caught seven marlin between them. I knew then we had something.”

Today, a subscription to Hilton’s is standard operating procedure for most bluewater tournament anglers and top offshore charterboat skippers who are map fishing and need to make the best use of their time on the water.

“We’re now an online web service that provides our subscribers with “real time” data on the conditions that affect where offshore fish are highly likely to be on a given day and where they’ll be tomorrow,” Hilton said. “The salinity, upwellings, bottom topography, currents, temperature breaks, and chlorophyll—which affects water clarity—are all figured in with great access to the most current data.”

Hilton often compares the various parameters his system reports to a poker hand, where each added element boosts the likelihood of catching pelagic fish.

“We provide the most current data from the satellite services, so that anglers can get updates the morning of their trip, or can log in via a laptop and satellite phone to get current data while they’re offshore,” Hilton said.

Most offshore anglers are well aware that offshore waters are constantly in motion. But Hilton’s system provides an easy-to-understand fish mapping graphic system that allows anglers to quickly note the most desirable elements and where they intersect.

Particularly the Gulf Loop Current in the Gulf of Mexico and the Gulf Stream along the Atlantic Coast, provide gamefish highways and feeding areas that are well known, but the many smaller eddies that spin off these large flows are also highly productive for gamefish. Hilton’s fish mapping system makes it easy to pinpoint these eddies and find great fishing spots.

As water from the ocean depths rotates upward to the surface and then back toward the bottom and this movement is also important in locating gamefish.  The upwellings bring nutrients from the sea bottom thousands of feet down to the surface, and this starts the food chain for plankton. The microscopic creatures are consumed by squid, shrimp and tiny fish, which are consumed by larger fish, on up the food chain to the giant blue marlin and bluefin tuna sought by anglers.

Oddly, the upwellings show up as slight depressions in the sea’s surface, while the less productive downwellings, where nutrients sink, are slightly higher than the surrounding sea surface. The upwellings are easy to distinguish on Hilton’s charts, however—they show as distinct red imagery, frequently centered around a large eddy of clockwise–rotating water. 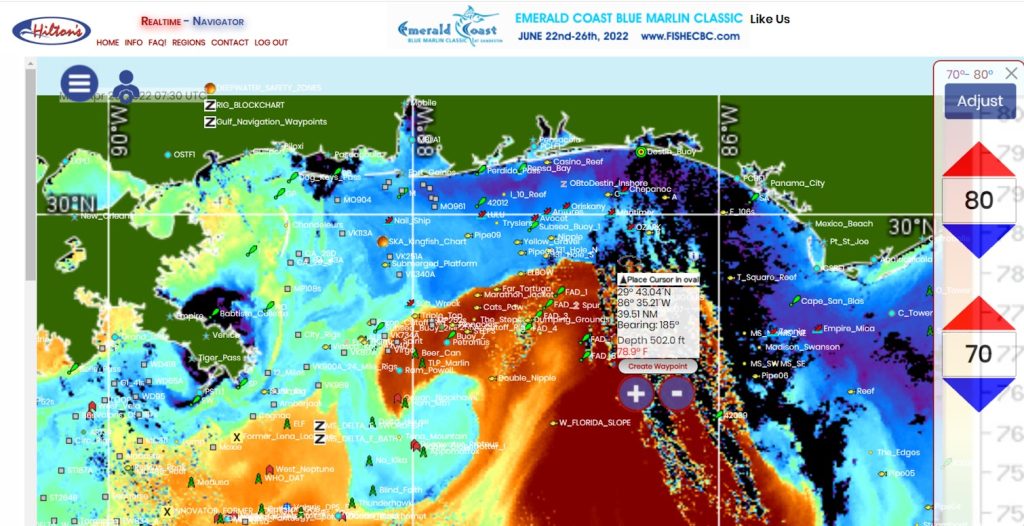 There are also frequent temperature breaks, where warmer water pushed in from the southern seas meets cooler inshore waters or waters from more northerly locations. The different temperature waters have different densities, and so they don’t mix. This creates very evident current seams along the intersections, and these seams frequently load up with Sargasso weed and other debris, which attracts small fish, which in turn attract larger fish.

Temperature breaks can be particularly significant in fall, winter and spring, when the big game species are looking for warm water—they will avoid any inshore water where the water temperature is lower than 72.

In addition, chlorophyll levels directly affect the color or clarity of the water. More chlorophyll means reduced clarity, resulting in the green tint of the nutrient-rich water from the beach out to several miles offshore in most areas. These waters are often productive for king mackerel, cobia and other species, but less so for marlin, wahoo and other pelagics.

Farther out, where chlorophyll levels are low, the water becomes extremely clear and takes on the cobalt blue hue that the true pelagics love. This is where billfish anglers often go to score. Occasionally, tongues of this deep blue water swirl inshore, temporarily creating feeding zones that can be red hot for a few days, then disappear completely.  Hilton’s allows locating these tongues and fishing their edges precisely.

Salinity is another important feature monitored by Hilton’s Realtime Navigator. While salinity is fairly consistent in the deep-blue water far offshore, it changes rapidly nearshore, particularly where major outflows like the Mississippi River enter oceanic waters. 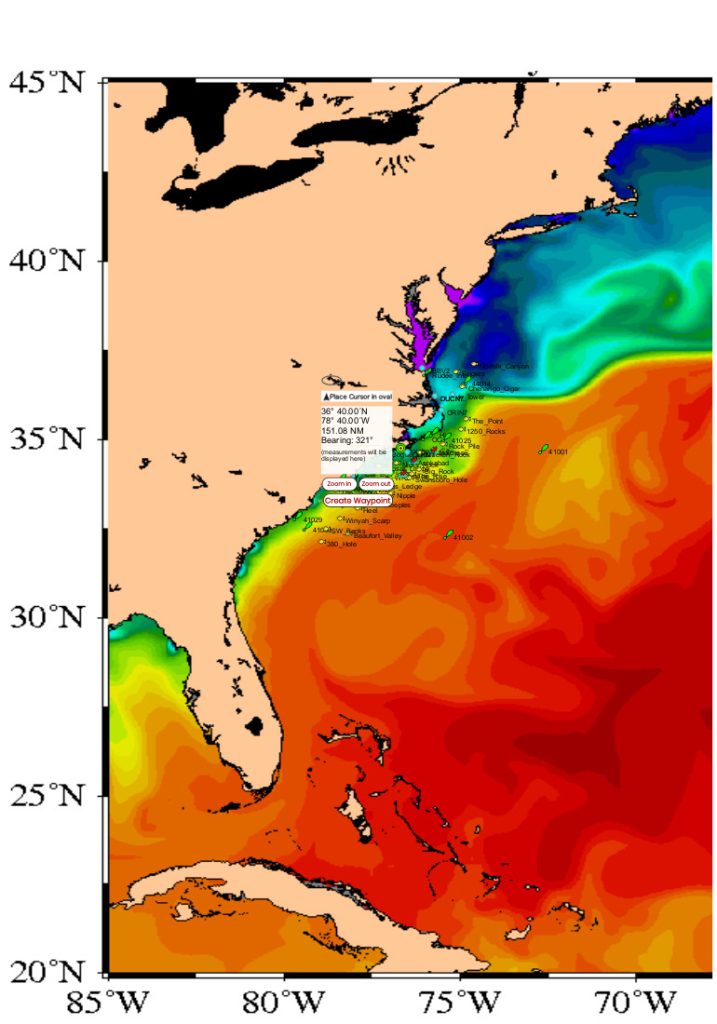 Easy to read salinity level charts can help put anglers on the fish they are looking for.

King mackerel prefer water with 30 to 36 parts salt per thousand, so for those in search of a tournament winning king, fishing too near a freshwater inflow where salinity is low is likely to be less productive than staying in the prime zone.

Kings are also known to favor some color in the water, probably because of the abundance of smaller fish in green water zones.  Finding areas where the right salinity and chlorophyll readings intersect is easy with the program. All of this data is available at the click of a button, updated daily, on Hilton’s Realtime Navigator.

A wind-speed button shows wind direction and speed, and the highs and lows where the wind is coming from or running to. You can look at the forecast for the future—the weekend perhaps.

Wave heights are also available, a major comfort and safety factor for those borderline days when going offshore might not be quite as much fun as the anglers hope for.

Hilton’s fish mapping service starts at $200 per year. It’s available for U.S. coasts and many parts of the tropics.

“You can more than pay for a year of our service with the fuel you save on one trip,” Hilton noted. “If you go directly to a productive area instead of spending hours looking for a good rip or color change, your fuel savings can be huge, especially for twin diesel boats or those with multiple big outboards.”

Hilton pointed out that satellite data is very helpful even for those who don’t have a satellite link for getting new information while they are offshore. 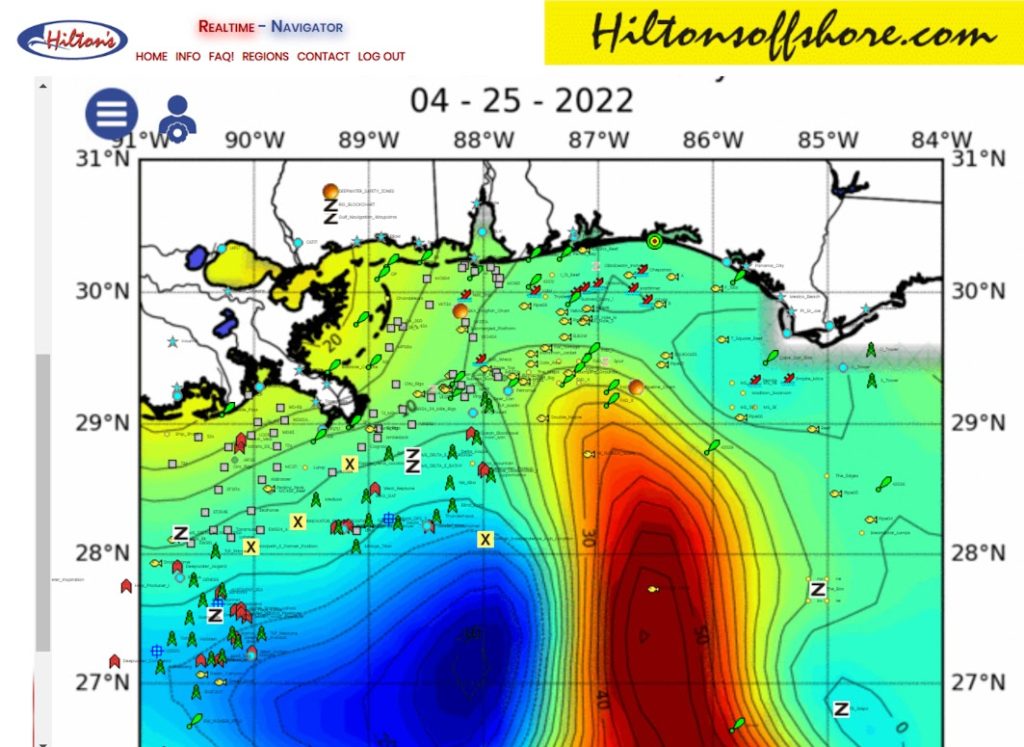 Having all of the fish mapping information provided by the Realtime Navigator helps anglers find fish faster and use less fuel doing so.

“You can see which way color lines and rips are moving and at what speed and you can navigate to where the hotspot will be on your fishing days, not where it was yesterday,” he said. “In most cases, the conditions take several days to change, and an eddy that’s moving in a certain direction will continue in that direction for some time.”

Structure offshore is a sort of ace in the hole, he says.

“Structure trumps all the other conditions in offshore water,” Hilton explained. “We’ve found that the bait stays around these structures even where the other conditions we monitor via satellite indicate that conditions are not the best. So they’re always worth a visit, and we keep very close track on where these structures are located—many of the movable rigs and drill ships move from week to week, and we monitor that closely.”

Structure can also include natural breaks in the bottom, ledges or sea mounts that are universal fish attractors.

According to Hilton, where the ideal conditions of current, water clarity, temperature and upwellings intersect with offshore structure, manmade or natural, the odds of catching pelagics go way up.

“The idea is to get the perfect hand of all those conditions together, and then you’re giving your crew the best chance of success in the shortest time,” Hilton said. “If you go out there blind, you may miss a great trip by just a mile or so, never know it’s there, and that could have made your trip.”

Hilton pointed out hat his service is widely recognized among competitive anglers as the go-to system for finding offshore fish.

“Some of the best offshore captains on the big tournament circuits have been using our service for over 10 years,” Hilton said “We don’t provide analysis of what was yesterday—we provide the most up to the minute data that’s available from the satellite information, the absolute latest shots on the day of your trip.

“You can save those charts to your system and then see your boat on that chart relative to the spots, click on the waypoints and navigate to them on your iPad or smartphone. We’re working to get this incorporated in some of the MFD’s in future, as well, so the captain can integrate all of it right there on the console,” Hilton added.